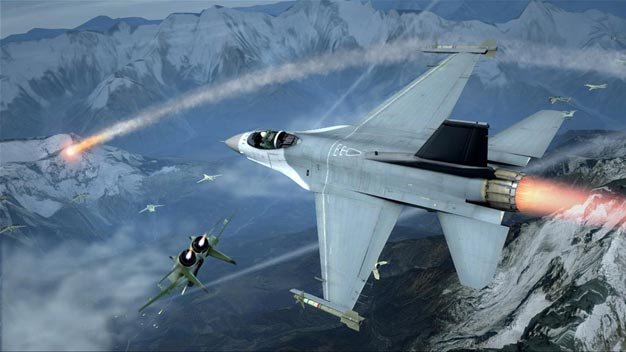 In our review of the original Tom Clancy’s H.A.W.X., one of the major complaints we had was the lack of realism; there was no taking off or landing, the planes could perform sudden 180 degree turns, and other similar quibbles. We hoped those issues would be addressed when we learned of the game’s sequel being released this fall. With the release of the game’s details and screens today, Ubisoft makes those hopes come true.

Tom Clancy’s H.A.W.X. 2 places us in the near future, battling insurgent activity in the Middle East. This time however, the American H.A.W.X. will not be alone as two other playable characters – one British, the other Russian – are there to assist in the action and involve us in their own storylines. Storylines that are intertwined with other Tom Clancy creations, as all his stories take place in the same universe, and might allow us to glimpse at other familiar characters in action.

Taking player feedback into consideration, Ubisoft aimed to focus on bringing players a more authentic experience in H.A.W.X. 2, adding take off and landing to the gameplay. Along with added realism, the developers have included new weapons, new aircraft, and new technology in order to bring peace to the region. And UAVs, the game lets us pilot UAVs in order to scout, surveil, and destroy targets from afar.