Two days of E3 down, one more to go. E3 has been just flying by, everyone that I have talked to here has said this was one of the best E3’s in years so I am pretty fortunate to have been here for it.

I’m pretty damn exhausted, like I said yesterday in my E3 Day 1 Recap article, strong legs are a must and I’ll add another piece of advice right now as well, get a good nights sleep. I decided to go out and drink last night and I got maybe 6 hours of sleep for today. Not the best idea. Enough about my personal issues, lets talk games. 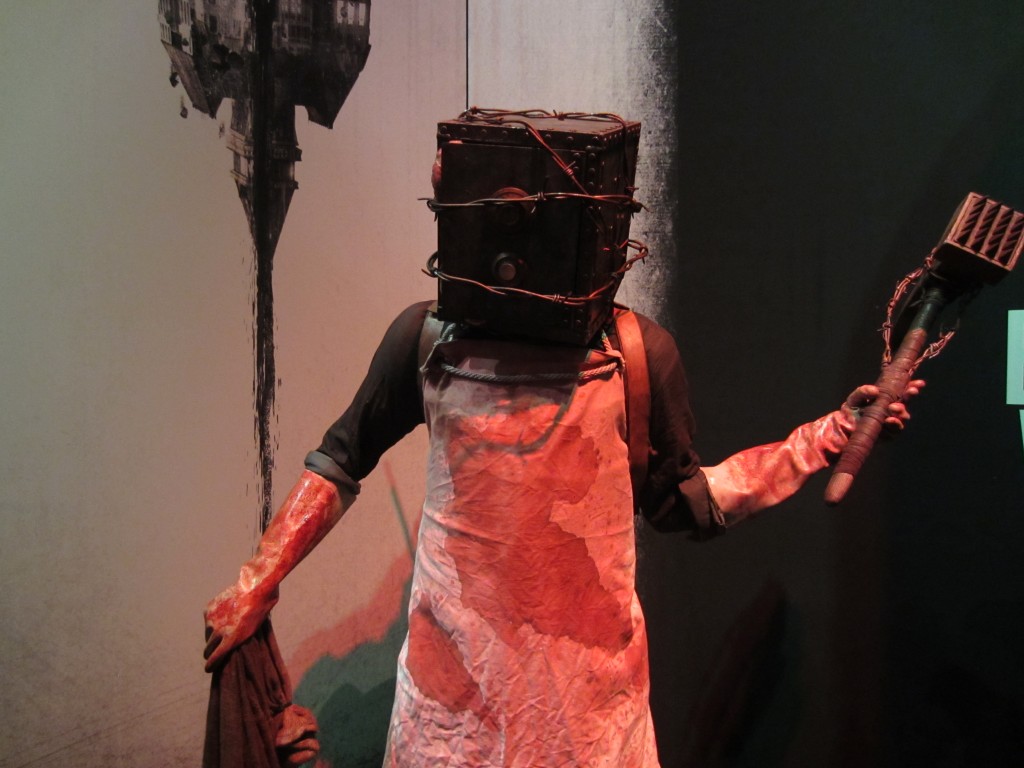 Today was the day of my Bethesda appointment. I had been looking forward to this chance to get my hands on The Elder Scrolls Online, Wolfenstein: The New Order, and The Evil Within. I got the chance to play every game except for The Evil Within. This was unfortunate, but the demo that was played in front of us was all that I needed to see to get excited. The game is extremely violent, tense, and just plain old scary. The demo we were shown was the same one that has been released to the public, however the demo was extended and showed us more than what has been previously released. One part in particular was extremely tense, after Sebastian, the main character, escaped a chainsaw wielding butcher he hide inside of a locker in a tightly packed room. The chainsaw guy came into the room and started smashing down doors and boxes, swinging the chainsaw every which way. I was waiting for him to chainsaw the locker in half, but it never happened. A later part of the game was also shown to us, it displayed the combat for The Evil Within. The combat is pretty straightforward, you have a gun, you shot bad guys in the head, bad guys die, everyone gets cake. Sebastian could also light dead enemies on fire, it was never explained why, but I’m guessing it had something to do with them coming back to life. The Evil Within looks like a pretty damn good game, I’m a big fan of survival horror and this game looks like it will be able to scratch my survival horror itch when it is released. 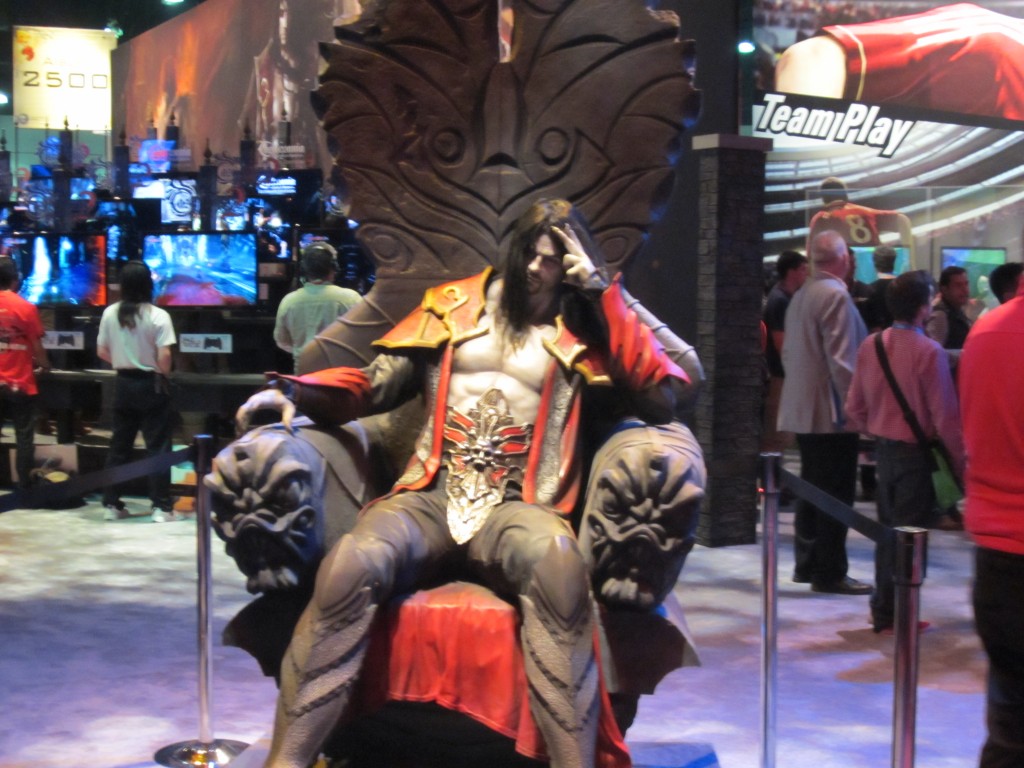 I put off playing Castlevania: Lords of Shadow 2 yesterday and decided I’ll get to it another day. This morning I somehow ended up (I have no sense of direction) in front of the doors that led into the hall that had Castlevania. As soon as the floodgates opened I made my way right up to the Castlevania demo which was empty at the time. “Why the hell did I put this game off?” is what I kept on asking myself as I played the demo. Besides Ryse and Battlefield 4, this is one of the best demos I have played so far. The combat is face-paced and exciting, and even though Gabriel is now Dracula, you don’t feel that powerful all the time. Gabriel has three types of weapons at his disposal, his main attack is a red whip attack, he can regain his health by using his Void Sword, and if enemies have strong defenses he can break them by using his…I forgot what it was called, we’ll just call it his Fired Hands. The first few groups of enemies I faced were fairly easy, but as soon as I got outside I was greeted by a giant siege golem trying to knock down my castle, an invading army, and some angel-looking guy who kicked my ass several times. The demo ended in spectacular fashion with Gabriel destroying the siege golem and taking out half of the invading army in the process, leaving Gabriel and the angel guy staring each other down. Of course they ended the demo right there; leaving you wanting more. They succeeded in that department. 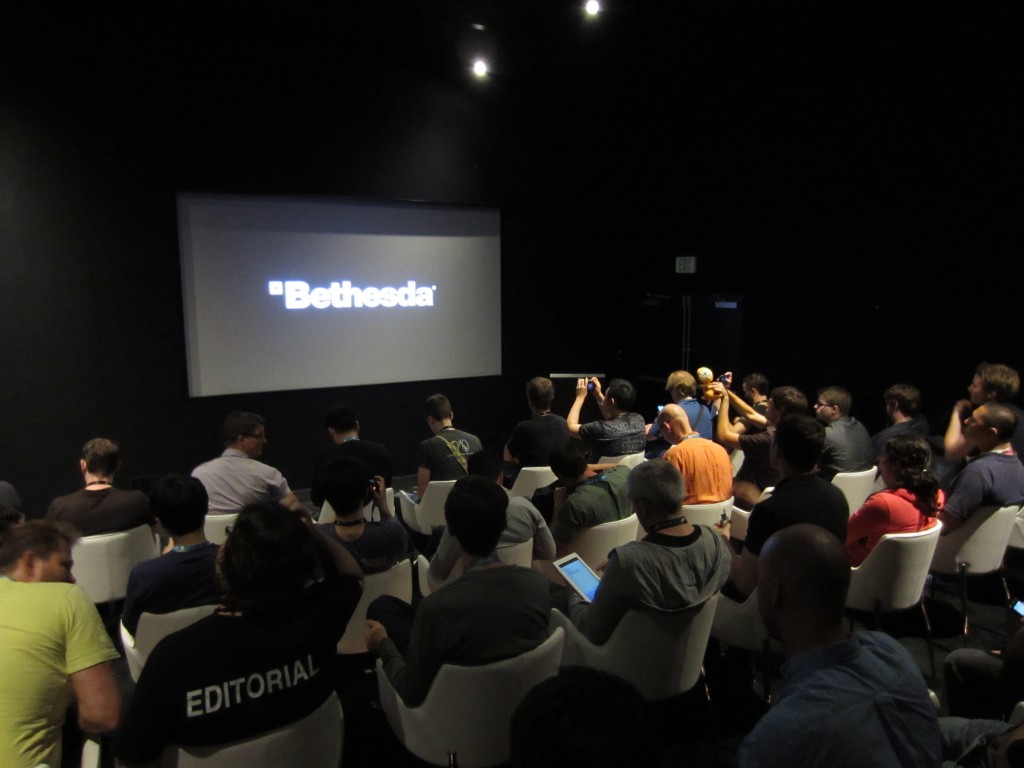 Disappointed. Disappointed is the adjective I would used to describe my experience with The Elder Scrolls Online today at the Bethesda booth. I’ve been waiting to play this demo or get into the beta for this game forever and now that I have gotten my hands on it, I don’t really want the game anymore. I’d assume this is the same feeling kids get when their parents give them that pony they’ve always wanted, only to find out the pony shits everywhere and won’t let you ride it. The demo dropped us into Daggerfall and let us choose between a few classes, I chose Dragonknight because it was the coolest sounding of all the classes available. Off I was into The Elder Scrolls Online and I had not a fucking clue in the world what I was supposed to do. There were no quest markers, but instead certain NPC’s glowed yellow which indicated that they had some work that needed to be done and they were too lazy to take care of it themselves (Quests). None of these glowing NPC’s showed up on my map so I couldn’t really find any quests easily, however one of the developers got me and the guy next to me to team up and go take on one of the low level dungeons in the area. Let me tell you, this demo had a lot of glitches and not the funny ones either.

When we entered the dungeon we had to collect 4 of something and also burn 4 of something, the good old MMORPG standard. As we started to burn the somethings and collect the somethings, I noticed that my burning somethings counter and my collect somethings counter did not track my teammates contributions to the quest. We had to do the quests on our own…together…in the same dungeon. After completing the stupid quests that we were forced to do (We couldn’t leave the area without completing them) a portal opened to fight the dungeons boss. “Things will get better now.” I said to myself while jumping blindly into a portal to the boss without informing my teammate of my plans…leaving me alone…to fight a dungeon boss…shit. Anticlimactic. Anticlimactic is the adjective I would use to describe that boss fight. It was just some random demon with an axe who died easier than any of the enemies I faced prior to fighting him. This game needs work, a lot of it. I know making an MMORPG ain’t easy, 38 Studios is a good lesson of that, but Bethesda is a videogame powerhouse and I expected better from them. I honestly did not have a fun time playing The Elder Scrolls Online today, and that’s the truth.

With only one more day left, I honestly have no idea which games I should play, Titan Fall and Thief are really the only two left that I want to get my hands on. If you guys have any last minute suggestions for games that I should try out, let me know in the comment section below.

About the author: James Conway

James Conway is an Editor for ThatVideoGameBlog. He is 23 years old and is a veteran of the United States Army. James is from Massachusetts and lived in El Paso, Texas for four years while serving in...  Read more...