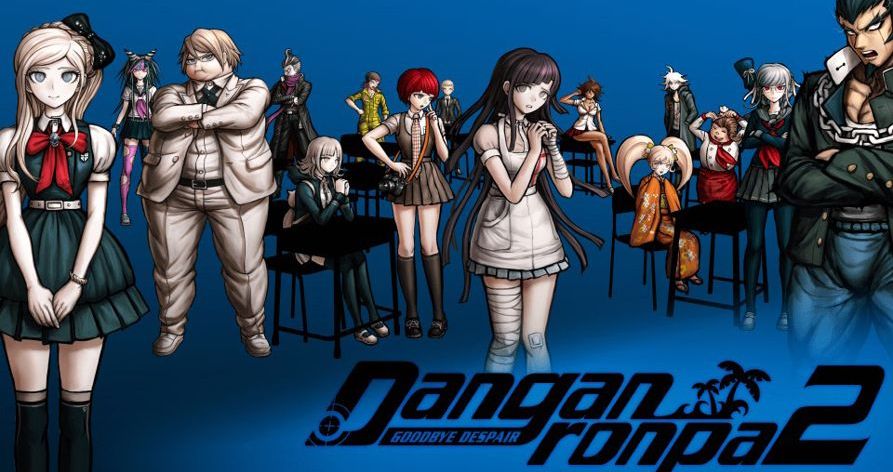 Imagine blue skies, white clouds, a glittering ocean, and a vast beach. Also imagine that you are here on this beach because you are on a school field trip with fifteen of your classmates. This serene location is Jabberwock Island, a very famous and popular vacation resort destination. Regrettably, it becomes immediately clear that the headmaster of your school, Hope’s Peak Academy, is a wicked little stuffed bear and you all soon realize that you may never leave this island again.

NIS America and Spike Chunsoft presents Danganronpa 2: Goodbye Despair, the sequel to the highly popular mystery adventure game Danganronpa: Trigger Happy Havoc. Although you believe that all hope is lost, the headmaster presents everyone with a way to leave the island; murder one of your classmates and survive the class trial without getting caught. During this frantic, high-stakes class trial, you must use the evidence that you have gathered during your investigations, as well as your classmates’ testimonies, to literally shoot down your opponent’s arguments. Survive the trial and you may get to see your loved ones again. Fail, the killer goes free and it’s curtains for everyone else.

Danganronpa 2: Goodbye Despair is basically an interactive novel that tells the story of Hajime Hinata and his fifteen classmates as they attempt to survive their ordeal on Jabberwock Island. Each of the students have been chosen to attend Hope’s Peak Academy because of an ultimate ability that each one of them possesses. Unfortunately for Hajime, he has lost all of his memories before his arrival at the academy and is not quite sure what his ultimate ability is. Playing as Hajime, it is up to you to discover the secrets to Jabberwock Island and to root out the killers before they kill you. The class trials is where Hajime will do his best work and where the dark secrets of his classmates will be brought out into the light.

The class trials in Danganronpa 2: Goodbye Despair is where this game really shines. Once a murder victim has been discovered, you will have a certain amount of time to investigate the crime scene and to take notes on the condition of the body and the surrounding areas as well as to take any statements from your other classmates about where they were at the time of the murder and if the saw or heard anything that might help with the investigation. All clues are automatically added to your Electronic Student Handbook and can be called upon during the trial to refute or confer with the testimony that your classmates will give. During the trials, statements that are being given will float across the screen that you will need to slash in order to call them into question. In addition, you can target certain statements with your Truth Bullets, facts that you have discovered during your investigations, that you can use to shoot down any statements that you know for a fact are false or misleading. Combining the clues and questioning the other students will eventually lead you to the killer and allow you to solve the case. Otherwise, if you fail, the killer goes free and everyone else pays the ultimate price.

The graphics is Danganronpa 2: Goodbye Despair are some of the best that I have seen on the VITA to date. Renowned artist Rui Komatsuzaki was tapped to create a unique and darker take on the anime style. Visuals look like they are taken straight out of a manga book that showcase bright. Vivid colors with bold, contrasting lines really make the environments stand out. Character design is in line with what you would see in anime as each of the sixteen students are over the top representations of the types of characters that you would have in Japanese manga. The dark setting and story elements are really complimented by Komatsuzaki’s art style and helps to give the game a personality and feeling all its own.

Danganronpa 2: Goodbye Despair has hands-down the best soundtrack that I have heard on the VITA this year. While you are interacting with the other students or just wondering around the island trying to discover it’s many secrets, you will be treated to a very diverse assortment of background music. The game will show the title of the song that is currently playing in the top left corner of the screen whenever a new song is playing. Tunes range in variation from brooding, dark energy soliloquies to upbeat, kettle-drum heavy island melodies and jazzy, horn-infused dance serenades. The voice over work is stellar as well. The characters come to life by a voice cast that was really able to get in touch with their characters. No matter how ridiculous some of the students personalities are, the dialogue and its delivery made for a very entertaining experience that helped to keep me engaged in the story and excited to delve into the mysteries that are always around the next corner.

Having not had the opportunity to experience Danganronpa: Trigger Happy Havoc before playing the latest outing from Spike Chunsoft, I didn’t quite know what to expect. Being that at it’s core, Danganronpa 2: Goodbye Despair is an interactive novel, there is a lot of reading. Other than running to the first few available locations on the island and exploring those locations, the bulk of your time will be spent talking to the other characters and getting to know them. In fact, it took me a little over seven hours before I even got to the first class trial.

This may be a turn off for players who are expecting a game that has a lot more action. However, once I got to that first class trial, I was really taken by the way that the game system is set up to go over the facts of the case, rebut testimony and to finally come to a consensus as to who the killer actually is. If not for the spectacular writing and the over the top characters to carry the story along, I think that many players would not stick around long enough to get to the point in the game that really showcases it’s strengths.

Danganronpa 2: Goodbye Despair very much reminds me of another courtroom franchise that I have enjoyed in the past. However, Spike Chunsoft has taken that formula, turned it on its head and turned the mystery elements up to one hundred. The writing in this game is on par with mystery television shows like “The Killing” where you think the murderer is one person, but soon learn that you were wrong and it ends up being someone else. While the game is a murder mystery, there is a good amount of humor that I often found myself laughing out loud and then looking around to see if anyone was looking at me. This mix of mystery story elements, outrageous characters and bizarre locations made for an awesome trip that I will not soon forget.

Did you like this review? Pick up your copy of Danganronpa 2: Goodbye Despair.

Finally a way to deal with unruly classmates

You must buy a ticket for a whole seat to the experience that is Danganronpa 2: Goodbye Despair, but you will only need the edge.