Zombies have been fodder for video game designers for some time now and just when you think the trend is beginning to fade, Techland releases another game that takes the genre to a whole new level.  The company that brought us Dead Island and Dead Island: Riptide is at it again in their latest foray into the world of the walking dead with Dying Light.  Set in the fictional city of Harran, a devastating virus related to the rabies virus has swept through the population turning hundreds of thousands of people into flesh-hungry abominations.  To prevent the spread of the virus, international organizations have banded together and have sealed off Harran for fear that a world-wide epidemic could threaten the survival of the entire human race.  Not everyone left in Harran is infected, however, and survivors are left to fend for themselves or succumb to an indescribable fate. 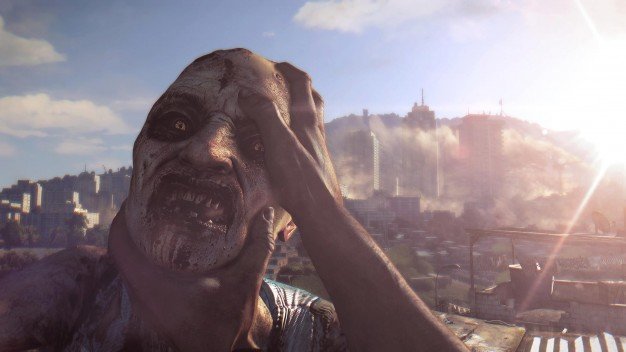 The first person view really makes for some tense moments.

Dying Light picks up where the Dead Island series leaves off.  I’m not talking about storyline-wise, but in the way that the game mechanics have changed to breathe new life into a series that, honestly, had gotten a little stale. Deprived of the basic resources needed to survive and constantly threatened by bloodthirsty hordes roaming the streets, you must use extreme measures to ensure your survival or face certain death.  This is a first-person, action survival horror game, where players must scrounge for supplies to survive during the day and craft makeshift weapons to fend off the undead hordes.  Nights in Harran is when the hunter becomes the hunted and the more dangerous and aggressive infected roam the streets looking for prey.  This is when your skills as a survivor will be tested to their absolute limits.

The RPG-style zombie-brawling action of the Dead Island series returns giving you the chance to build up your stats while opening a giant-sized can of whoop-ass on any infected that may darken your path.  The weapon crafting system returns allowing you to craft any type of weapon that may not be practical in normal situations but works perfectly for dispatching a horde of zombies that block your progress.  Once you find certain blueprints, you are free to craft weapons (provided you have found the prerequisite ingredients) that help to make your life in Harran a little easier.  For instance, an electrified pipe wrench, cobbled together with electrical wire and a couple batteries, will stun a zombie preventing them from fighting back so that you can deliver head-splitting blows to end their misery.  The crafting system is very robust and offers so many choices that you can’t go wrong once you find that weapon combination that will turn you into a walking zombie disposal unit. 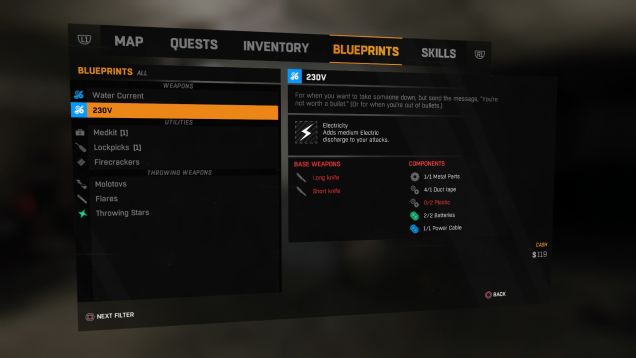 You need to find blueprints before you can craft most items and oftentimes they are given to you for completing missions.

The feature that sets Dying Light apart from the Dead Island series is the addition of the first-person parkour abilities (think Mirror’s Edge) that opens up the game and takes it, literally and figuratively, to a whole new level.  Getting the player off of the ground and allowing them upward mobility gives the player a new way to approach traveling around the city as well as opening a new way to defend yourself from oncoming hordes of zombies.  Using the structures in Harran to move about the city offers relative safety from infected that may be roaming the streets below as well as giving you access to places that may contain much needed supplies.  Furthermore, these same parkour abilities open up new ways to defend yourself by using fast attacks to catch zombies off guard and to use their weaknesses against them.   This new method of traversing the environment and close quarters combat is a fresh approach to the series and makes the game feel like the genre is moving forward.

As far as the visuals in the game goes, Dying Light may be the most beautiful game that I have played this year.  The PC that I used to play my review copy on is by no means the most powerful gaming rig, but the game nonetheless looks spectacular.  It is the first game powered by Chrome Engine 6, a cutting edge incarnation of Techland’s proprietary technology, that was designed from the ground up for this new console generation.  Character models are very realistic with the facial features actually looking like real people.  The picturesque postcard scenery that is Harran is in stark contrast the the fate of its citizenry and portrays a beautiful city that may never be the same again.  Built to take advantage of the features offered by Nvidia video cards, CE6 sets the bar high for visuals this year that many game developers will struggle to live up to. 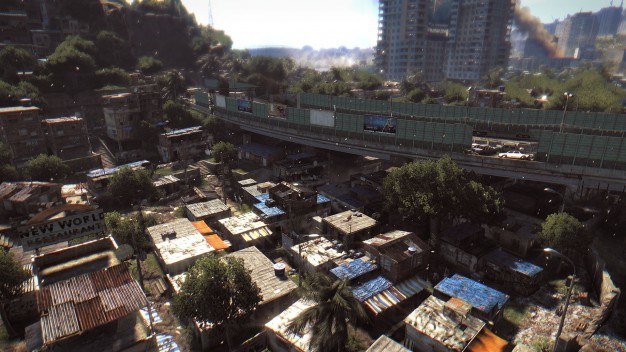 The city of Harran is huge and looks very good.

The sound effects in Dying Light are just what you would expect and makes your time in Harran a bit more creepy.  The groan of zombies alerts you to their status at all times.  If they see you, they will let out a blood curdling groan that lets you know that they are on to you.  The larger variety zombies will growl and scream as they attempt to include you into their ranks.  Also, the sounds of your attacks on the zombies really brings home the dire situation that you are in.  The crunch of a water pipe against the skull of a zombie emits a chilling crunch and squish as bone and brain matter splatter the ground.  Along with the spine-tingling soundtrack, it all comes together to create a world that is “alive” and teaming with dangers that are lurking around every corner.

As a fan of the Dead Island series, this new take on the zombie game was surprisingly fun and inventive.  Anyone that has played Mirror’s Edge can attest to the impact that that game has had on the industry.  I have to admit that the first trailers that I saw of Dying Light made me a little skeptical that Techland would be able to pull off this new take on their zombie series.  My main concern was how they would tie in the parkour elements in a way that would be, first and foremost, fun and add to the weapons that the player would have at her/his disposal for beating back the walking dead.  While getting the hang of the traversing mechanics took me some time to get used to (completing some jumps in the early parts of the game took some precise timing), once I was able to get my brain around how it fit in the game as a whole, everything just seemed to click, opening up a world of possibilities in the style in which I choose to play the game. 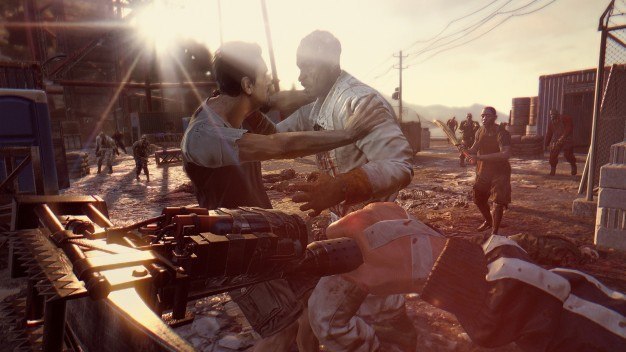 Zombies aren’t the only threats that you have to watch out for.  Survivors often pose even bigger dangers than the walking dead.

While the combat and the weapon crafting system in Dying Light is superb, it isn’t the only place where the game shines brightest.  Where I found I had the most reaction to the events happening in the game is when I was making my way through the city to attempt side missions or to complete the main story missions.  Sometimes you have to come down from the rooftops to proceed forward and you never really know if a zombie is lurking behind a door or in a room that you are about to loot for supplies.  It is that fear in the back of your mind that something will get you from a direction that you failed to pay enough attention to that adds excitement to this game.  It is the zombies themselves and their reactions to their environment that takes this game head and shoulders above any that have come before and a must play for anyone who is a fan of the genre.