There are no battles to fight. There are no weapons to wield.  There are no bosses to conquer. But there is plenty of platforming, exploring and collecting to be found in Super Win the Game, developer Minor Key Games’ heartfelt love letter to the 8-bit age of video games. Super Win the Game is the sequel to 2012’s You Have to Win the Game, a freeware platformer meant to transport aging gamers like myself back to the flickering, dithering CRT screens of their rosy cheeked youth. And though both are great games, SWtG takes “the feels” to the next level, distilling all the best tropes of classic games – the exploration of The Legend of Zelda, the progression of Castlevania, the platforming of Prince of Persia – into a concentrated nostalgia bomb, capable of leveling decades of crappy AAA sequel-fortified video game cynicism in one blast. It’s a game made with love for those who love games, making it the perfect recipient for the IndieBox treatment. 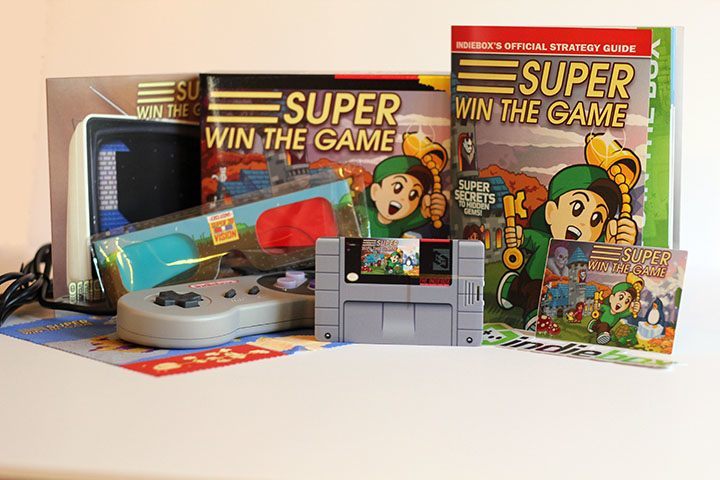 IndieBox is a monthly subscription service that gives indie games the big budget treatment, re-packaging them in a collector’s edition box and mailing them to your doorstep. Each IndieBox includes a retro-style game box, USB game cartridge, color instruction manual, original soundtrack and other collector’s items related to that month’s featured game, which are always Windows, Mac and Linux compatible. The service starts at $19.99 + shipping ($4 for United States, $9 for Canada and $14 for international) for a recurring 1-month subscription, which you can cancel at anytime. Of course, if you lock into a longer commitment, like a 3-month ($17.99/mo + shipping) or 6-month ($15.99/mo + shipping) subscription, you save some scratch. You can also purchase copies of previous IndieBoxes for $24.99 + shipping while supplies last. 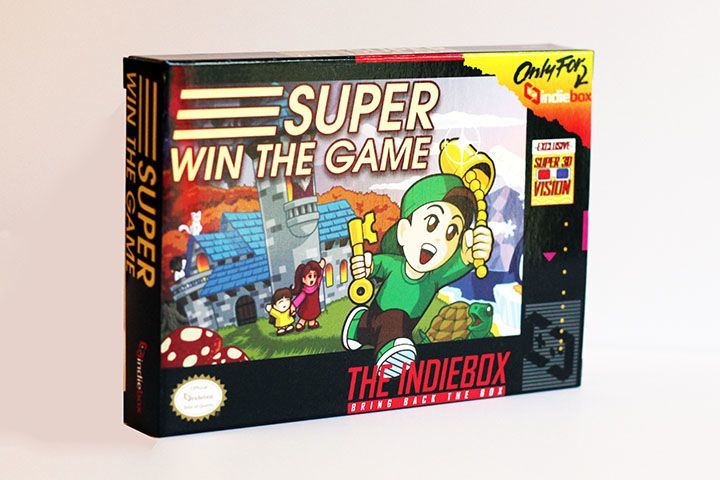 Oh. Em. Gee. IndieBox’s designers always manage to create gorgeous box art directly inspired by the featured game of the month, but the packaging for Super Win The Game takes the whimsy to the extreme.  They’ve created a pitch perfect homage to a classic SNES game box, all the way down to the pseudo-Nintendo Seal of Quality in the corner. In addition to being a collector’s item, this release is a limited edition – each box is individually numbered out of 1,250. Another reason to subscribe to the service, as if another reason beyond “This is a great deal for great games with great extras!” was needed. 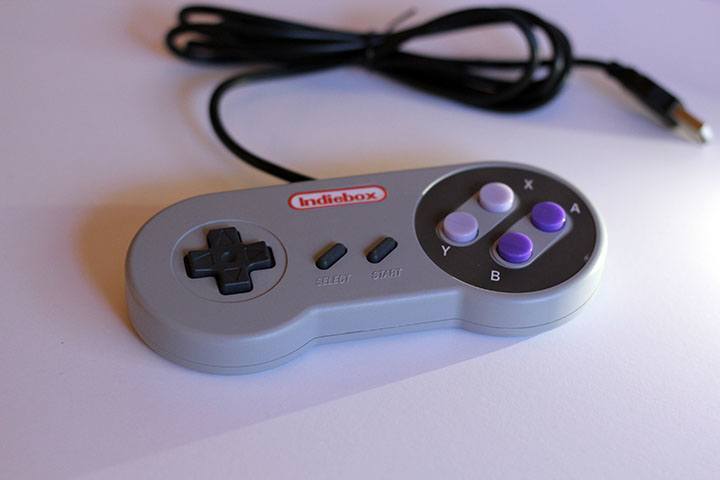 Continuing the throwback theme, they’ve included a SNES-styled USB controller, emblazoned with the IndieBox logo on the front and the Super Win The Game logo on the back. It feels a little lighter and cheaper than the real thing, but overall it’s still surprisingly well made! I tried it out on my PC and MAC, getting my old school game on with some NES, SNES and GBA emulators and it worked like a dream. But with Super Win The Game it worked like whatever it is that dreams dream of as the controls have already been mapped so you can plug, play and game the day away! 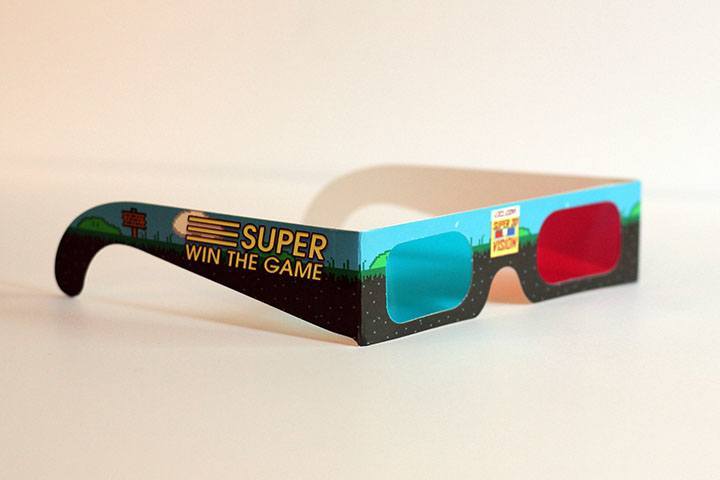 New to the IndieBox release of Super Win The Game is an anaglyph rendering mode. In other words, with these red and blue shades you can play the game in 3D. Your eye-popping gaming experience doesn’t have to be eye-straining, thanks to a wealth of options for adjusting the anaglyph effect – desaturation, brightness, dimming and tint can all be tweaked to your personal preference. You can even switch which side is red and which is blue. Of course, the new 3D mode isn’t compatible with the equally-adjustable, analog-emulating CRT simulation mode, so you’ll have to choose one or the other. Two flavors of nostalgia, both equally scrumptious to my visual cortex. 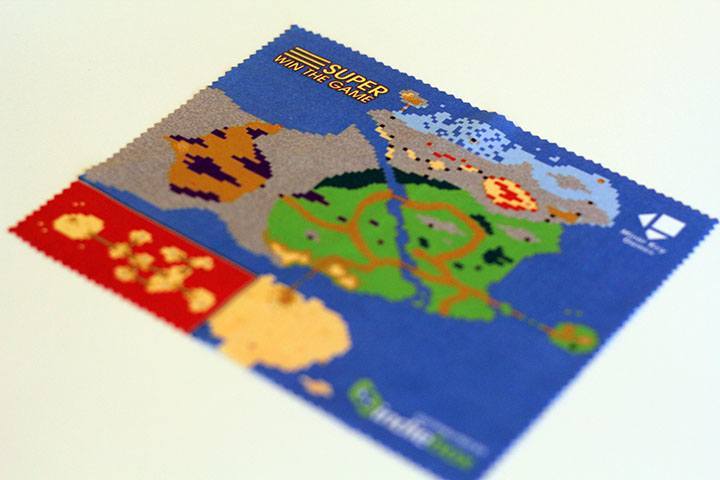 Dorothy Parker, a fixture of 1920s literary society known for her sharp wit and even sharper pen, coined the much-quoted  phrase “men seldom make passes at girls who wear glasses.” As a lifelong glasses wearer, I’d have to disagree with dear Dorothy – she’d be surprised by how effectively a modern brassiere draws attention away from the eyes and onto two entirely different physical features. Why peek in windows when there are mountains to explore! All that to say I really appreciated the inclusion of this Super Win The Game-themed micro fiber cloth. Now I can make sure no dirt, dust or oil obscures that deadly stare that says “my eyes are up here, buddy.” 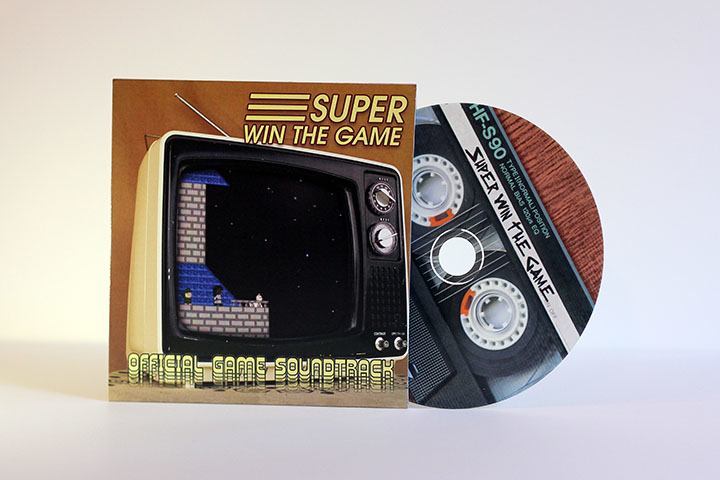 The official Super Win the Game soundtrack – containing all sixteen blippy, bloopy tracks from the game – is channeling some serious Guardians of the Galaxy: Awesome Mix Vol. 1 realness with this brilliant artwork. It definitely pays tribute to the 80s as I remember them – so many mixtapes made by so many people with god-awful penmanship! It was a magical, mysterious time for music. And this captures that feeling in a way that mere words can’t. 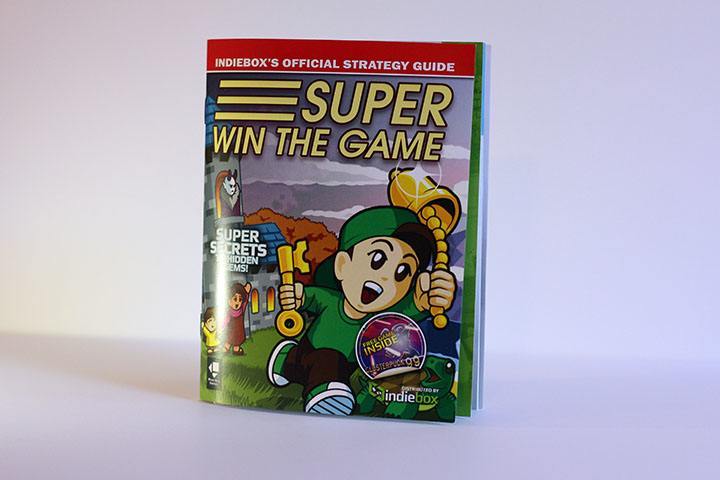 In this digital age, there’s nothing quite like holding an actual printed instruction manual in your own two hands. Or three hands. Or one hand and a hook. The point is, there’s an almost visceral thrill in being able to touch a part of your body (you might as well think it, ’cause I’m already silently judging you) to a physical ink and paper guide to the game, a neo-artifact of the analog age. It’s got hints! It’s got characters! It’s got items and enemies and environments! All those little details that help flesh out the world of Super Win The Game are lovingly and laboriously encapsulated in this instruction manual, styled after the official strategy guides of old.

Last but not least, you get the game on a credit card-sized USB cartridge containing a DRM-free copy of Super Win The Game on Windows, Mac and Linux. And it looks like a little SNES game cartridge! For gamers, this elicits the same level of “squee” as a kitten in a teacup would for a single woman in her thirties. I know, because I happen to be both a gamer and a single woman in her thirties. If I saw a kitten holding this USB cartridge in her widdle piddy paws, my ovaries would explode.

This month’s IndieBox presents further evidence that the service is amazing value. A digital copy of Super Win The Game would set you back $14.99. With IndieBox, you get a digital copy, thanks to the Steam code for those who don’t want to break the seal on their collector’s edition cellophane wrapping, PLUS a physical copy of the game along with a box, soundtrack, controller and other assorted goodies. There’s even a bonus game, ClusterPuck 99, included for the sheer hell of it. All for $5 more. If you have any interest in indie games, skip the terrible foot long  sandwich and subscribe to IndieBox. Both your inner child and your arteries will rejoice.

Super Win for the win!

Super Win The Game is IndieBox’s best release yet, a balled fist of nostalgia straight to the face.

If you bought it, you know it’s a knock out. And if you didn’t, you (now) know you’ve lost out.