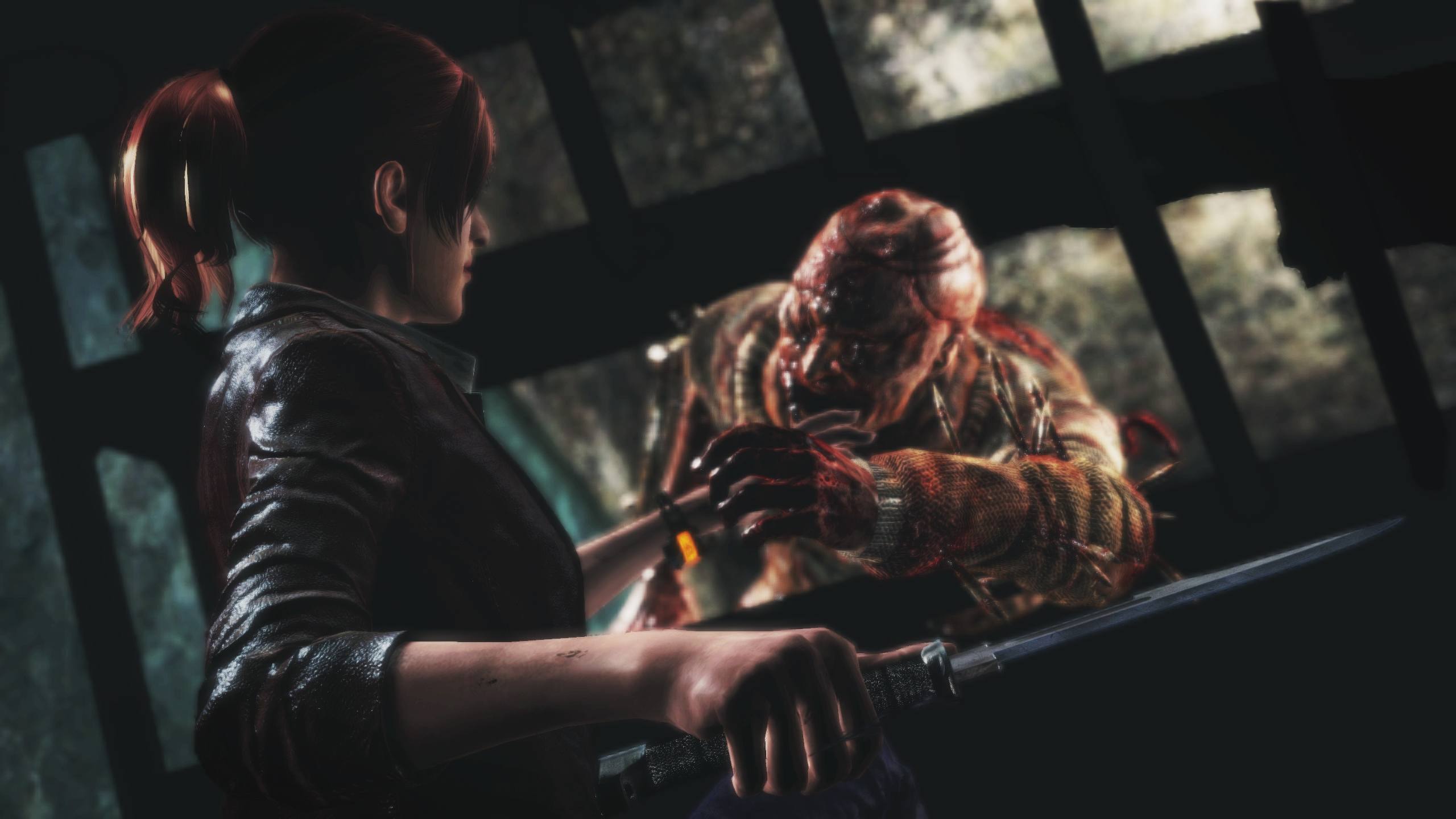 The game runs smoothly, with mainly slick controls and no technical hiccups. It’s going to be easy to maintain a high accuracy record due to the simple but effective aiming mechanics, which lends itself well to the limited supply of ammo that has come to define the survival horror genre. That’s with firearms, however; melee combat is a different story. Melee is mostly employed in the Claire and Moira campaign, and runs into a few problems.

Movement can be jerky at times and deathly slow at others, and when injured, the run function becomes pretty much redundant. This makes for some pretty clumsy up-close combat, not much improved by the lack of imagination in melee moves. Lashing out with Claire’s knife or Moira’s crowbar is far from satisfying due to the slow, repetitive character movement that ultimately deals out a frustratingly low amount of damage. Redemption is found however in the teamwork element of the two characters, Moira has the ability to stun enemies, at which point she will shout for you to finish the job – which is usually a good roundhouse kick which compensates for previous misgivings in terms of satisfaction. 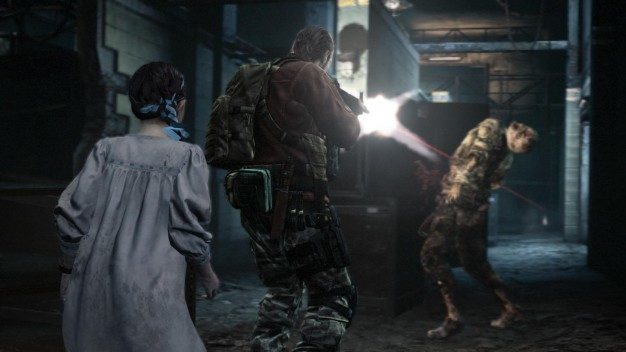 The issues with movement however, can become infuriating when dealing with location-specific triggers. Running down a corridor to find a guard hanging from the ceiling, it takes a few attempts at walking past to be able to “catch” the button icon to inspect which, while only being a small feature of gameplay, somewhat breaks up the fluidity of the game.

Capcom has, however, delivered on the typical claustrophobia of the Resident Evil series. This is seen more in Claire’s campaign than Barry’s, which offers players a more traditional setting. The labyrinth of dark corridors, bloodied torture devices, and the threat of enemies in every corner, window, or doorway makes for intense gameplay which runs smoothly and maintains the inherent terror of the series. With the customary ominous syringe of green liquid, small objects falling slightly to produce echoing crashes of adrenaline, and the fear bred from being handed weaponry and noticing the auto-save, the atmosphere serves up a work out for the heartbeat that matches the reputation of its predecessors. Graphics suffer slightly due to the darkness of the first campaign, with cloudy-looking backdrops and a lack of the detail and clarity offered in the first Revelations game. Things look up, however, as you venture outside; in Barry’s campaign the rendering performs much better under lighter conditions and less cramped gameplay. 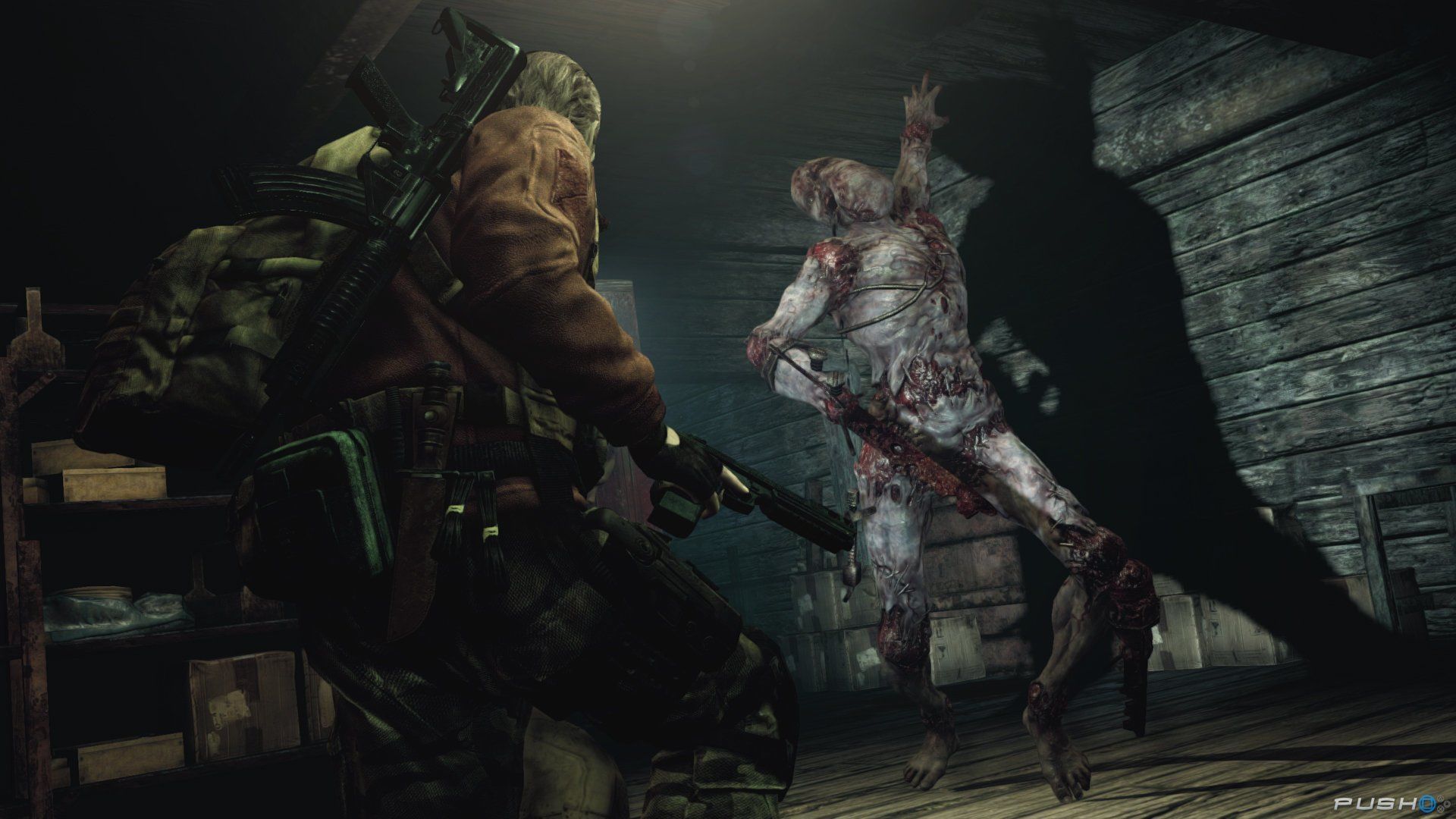 In fact, Barry’s campaign provides a generally more strategic experience. The removal of the looming darkness allows not only for higher quality visuals, but also a more expansive game-play environment. What sets this campaign apart specifically is Natalia, a creepy child that pops up when Barry reaches the island his daughter is being held on. With her strange powers to detect enemies and hidden items via an ominous yellow mist, she functions as a human embodiment of the Genesis scanner from Revelations. New dynamics of play are introduced here, as the tension of having a small child’s voice informing you of enemies round the corner builds significantly as the episode goes on. However, this may detract from the fear of the unknown that the series relies on for its scares.

The enemies don’t drop items, as in previous games, which makes it slightly more tempting to run rather than waste precious ammo, especially when you come up against a specific jump-and-cleave approach taken by certain mutants. They are fairly standard enemies, however, particularly in the Barry campaign where they are significantly slower, with no weapons of their own, and defeat-able through a round of one or two well aimed shots which is slightly disappointing. 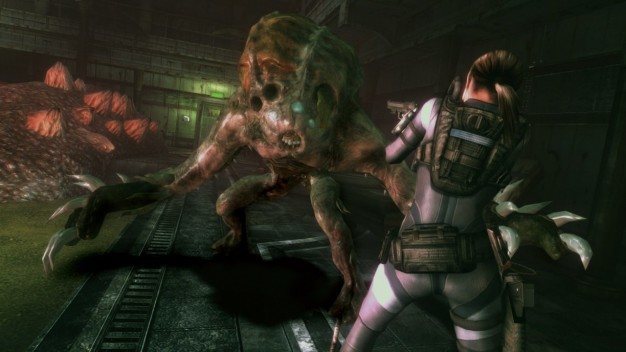 The storyline is mysterious and engaging even if it is another repeat of the Resident Evil formula (namely a large corporation operating in biochemical warfare through experimentation with one boss at the top that you just know you’re going to have to fight a mutant-version of), but hey, it’s a formula that works. The episodic format, however, seems a lot simpler in its narrative goals and the first episode poses significantly less convoluted story-lines so far.

Overall the game delivers on its hair-raising atmosphere and offers a plot that the player can easily engage with. Despite its shortcomings in terms of movement and graphics, though they do improve considerable on PS4, Revelations 2 is tight installment in the Resident Evil series. It can be proud to stand (or more appropriately, stagger and lurch as a piercing piano note strikes) next to the other titles in this terror-filled family of games.

Revelations Performs... But With Some Hiccups

While Resident Evil Revelations 2 – Episode 1 comes out strong in atmosphere and fluidity, it somewhat lacks the finesse required of gaming in 2015. With a less convoluted story-line, simpler menus and aiming, and the return of the ability to seek out enemies and hidden objects however, it’s a strong sequel to the hugely popular Revelations game.