The battle between angels and devils is one that has been fought in countless video games over the years and is usually a good topic to use to create some great storytelling as well as interesting gameplay.  NIS America has released their take on the topic with The Awakened Fate Ultimatum.  Set several years after the events in The Guided Fate Paradox, those same events set the stage for a new adventure where the boy who becomes a God will need to protect the world of Celestia again by defeating a great evil.  Being thrust into a war between these two warring parties will force you to make some difficult choices where acquiring a victory over the devils will mean choosing between the lives of two important allies. 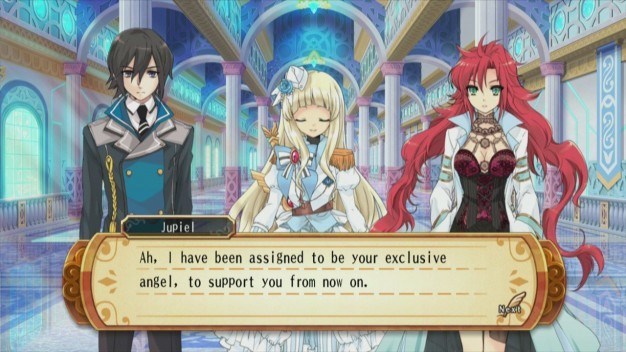 Jupiel (center) and Ariael (far right) are your main allies and will help you throughout the game to understand your new powers and provide wise council when you are faced with making tough decisions.

The Awakened Fate Ultimatum is a very, very story-heavy turn-based rogue-like RPG that gives the player the opportunity to wield the powers of angels and demons in a conflict that will present some tough choices in order to attain the best outcome.  The main action in the game takes place in areas called dungeons.  These dungeons are procedurally generated so no two trips into a specific dungeon is ever the same.  In the dungeons, you will be confronted by many enemies that can usually be dispatched easily enough if you are at a decent level and have been able to find or purchase weapons and armor.  If you need a little extra power to defeat a particularly nasty enemy, you can call on the powers of the angels and the devils or “Dietize” by pulling the left and right trigger buttons, respectively.  Being able to wield both of these powers opens some interesting gameplay situations as certain enemies can only be damaged from one power or the other. 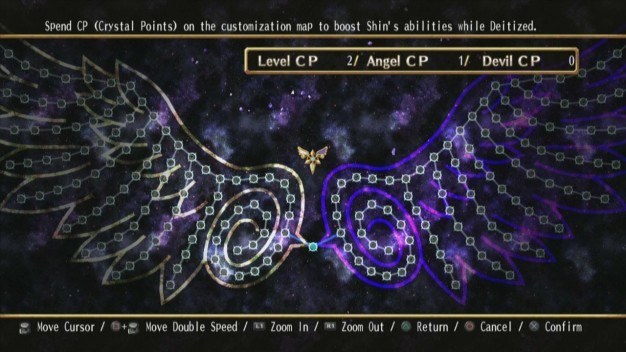 In order to level up your angel and devil abilities, you have to spend Level, Angel and/or Devil Chrystal Points (CP) that you earn from battling angels and devils as well as when you gain experience from your travels through the various dungeons.  These points can then be used to improve your angel and devil abilities in terms of HP, Skills, ATK and DEF.  While in the dungeons, you can also collect items such as fruit, jewels, shields and an huge variety or hand-based weapons.  It’s a good idea to store some of the items that you find when between dungeon missions because if you die in a dungeon, you will lose everything that you were carrying at that moment as well as any experience that you had gained. 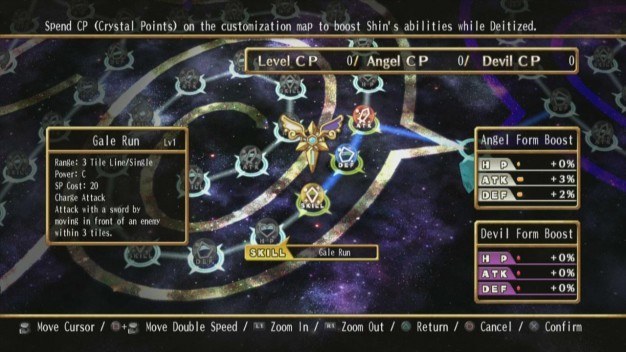 Health Points (HP), Special Points (SP) and Activity (AC) will need to be monitored at all times while in the dungeons so that you don’t fail the mission.  HP will deplete if you take damage from the enemies, SP will deplete when you Dietize into angel and devil forms and AC will deplete when you take any action such as walking or fighting the enemies.  HP and SP will replenish itself as you make your way through the dungeon.  AC, on the other hand, requires eating food or using items that specifically replenish your AC points.  If your AC drops to zero, your HP will quickly drain and when that hits zero, your fail the mission. 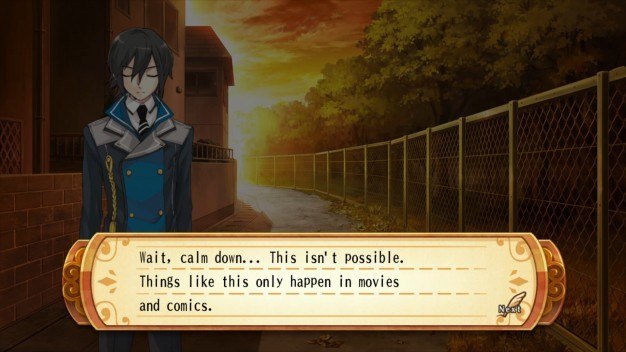 All story sections are presented with the characters in the foreground and the elaborate backdrops in the background. Some story sections take at least 25 mins or more to get through if want to sit through them all.

The visuals in The Awakened Fate Ultimatum takes on a two pronged approach style-wise to story presentation and the art style that is used when the player is in the dungeons.  During the story sections of the game, the characters that happen to be involved in the conversation are very detailed anime inspired drawings that sit against nicely designed theatrical backdrops.  Different characters shift in and out as the story progresses and the backdrops will change in accordance with the situation.  The dungeons are all grid based creations that are procedurally generated and set out in small squares that make up the rooms and hallways that you must travel to reach the end.  Your character and the enemies that you encounter are all done in the Chibi style (think large heads and little bodies) which adds a certain amount of charm as well as the ability of the game to present a lot of assets on screen at once.  It all comes together to present a very interesting dynamic between the mostly static story images and the fluid dungeon battling and crawling. 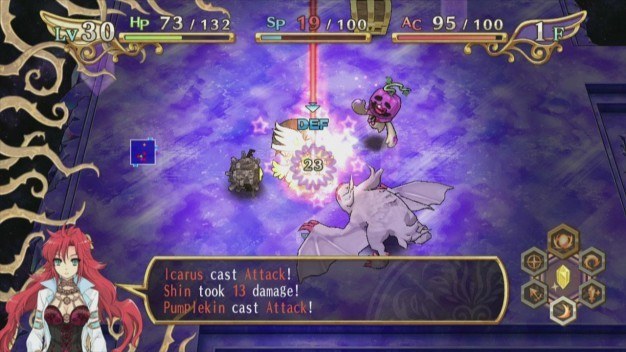 This is how all of the dungeon missions are presented. The Chibi art style is very cool but the battle system is dull and the dungeons feel like an afterthought.

The soundtrack can be described as being nothing short of fantastic.  NIS America is known for the incredible scores that accompany their games and the music in The Awakened Fate Ultimatum definitely lives up to their reputation.  The scores are flamboyant and gripping and fit well with the theme of angels versus devils and help to set the stage even in the areas where story is really heavy.  The sound effects are also a high point as the growls of devils and the clashes and clangs during battles bring the fight to life.  The voice overs additionally hit the mark of bringing the characters themselves to life even if some of the characters are pretty standard fare for RPG’s today.

For all of the effort put into making this game something special, there were a few areas that felt disjointed to me during my play-through.  While I love a good story in my games as much as the next guy, some of the story sections of the game were entirely too long.  It took me almost a hour to get through the initial story and set up before I was able to get to my first dungeon.  I never thought I would ever think this, but too much story can ruin a game as well as too little story.  I honestly feel that this should be classified more as an interactive novel as opposed to an RPG as you will spend way more time reading dialogue than you will exploring the dungeons.  You can of course fast track through the dialogue if you wish but that feels like cutting out more than half of the game just to get to the parts where you actually get to play it. 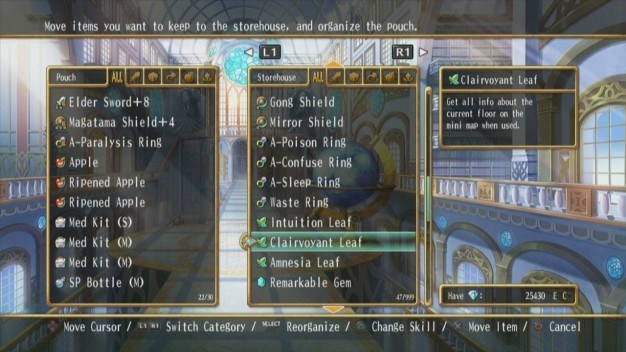 You lose all items that you carry into the dungeon or find in the dungeon if you die in a dungeon. Storing items between missions is one way to ensure that you have the items you need to make it through a dungeon but there are no guarantees and you start over from your last save anyway.

In addition, the dungeons feel like a separate part of the game instead of being apart of the story as a whole.  The dungeons have no connection to the story other than being just a way to just get you to the next story section.  There are some places in the dungeons where you will trigger a story element, however it is usually just one of your ally characters explaining an attack technique or sharing their feelings with you.  Your allies never accompany you and you are just set out on your own to defeat the baddies and make it to the end of the dungeon, thus triggering the next story section.  So much more could have been done to make the dungeon areas feel more like a part of the game as a whole but it just felt tacked on.

I never got very invested in The Awakened Fate Ultimatum for the reasons listed above simply because the parts failed to come together to present a satisfying whole.  Battle felt seriously lacking as your character does just as much damage in his normal form as he does in one of the two Dietized forms.  Other than the Special Attacks that you can perform while transformed, there was really no need to ever change forms as long as you have a decent hand weapon, a shield and are leveled up sufficiently.  Overall, I think that if you liked the first game then you might want to pick it up just to see where the story goes but if not, you might want to skip this one until you do.  The game is due to hit store shelves on Tuesday March 17 for the PS3 in both physical and digital forms.

The battle between Heaven and Hell continues