The prevailing opinion is that Nintendo’s E3 presentation this year was pretty bad.  Though Star Fox Zero looks like fun, a lack of new games outside of Amiibo-based Animal Crossing spinoffs left people uninspired.  It’s a shame, because last year, Nintendo revealed what would become one of the most discussed games from the show: a brand new IP called Splatoon. People had been waiting for something brand new, and Splatoon scratched that itch. When it came out almost a year later, it was a hit, but did it bring enough to the table? 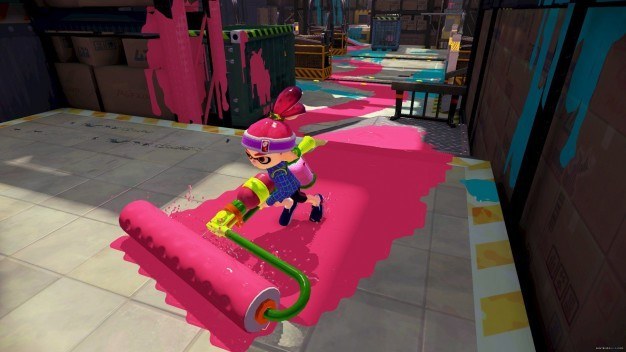 This is another game that’s hard to pin down. Technically it’s a third person shooter, but it’s a very unusual take on the genre.  The main game mode, called Turf War, pits two teams of four players against each other online. But the goal isn’t to defeat your opponents or secure an area.  Instead, players use ink-based weapons to cover as much of the ground as possible with their team’s color.  Each match only lasts a few minutes, so it’s imperative to act quickly.  All of this serves to make Splatoon much more welcoming than your average shooter.  Splatting other players helps you, but it isn’t your goal.  There’s nothing worse than going online to play a shooter and getting immediately killed every single time because you haven’t immediately mastered everything.  It changes the entire environment.  Even the controversial lack of voice chat was designed to avoid issues that plague so many modern shooters.

Turf War is the main attraction, but there are other modes.  For those who can’t play online or want to take a break to hone their skills, there’s a single player campaign.  In this mode, your goal is to get from the start of the level to the finish, using your Turf War-acquired skills to navigate puzzles and get rid of dastardly enemies.  The story is very basic on the surface: the evil Octarians have stolen the Zapfish that power your civilization, and you need to get them back.  But if you take the time to find the scrolls hidden in each stage, you’ll find that there is a deeper plot that I don’t want to spoil.  The campaign is very short; no more than a couple hours straight through.  This is a shame, because the single player mode is a lot of fun.  Sometimes I don’t want to deal with people online and prefer a different experience.  There are ways to extend it, though, which I’ll explain later.  Either way, your progress in the campaign will not affect your level or currency in the online modes.  Unfortunately, that makes playing the offline modes a trade off.  The good news is that you get “experience” and money from Turf War even when your team loses. 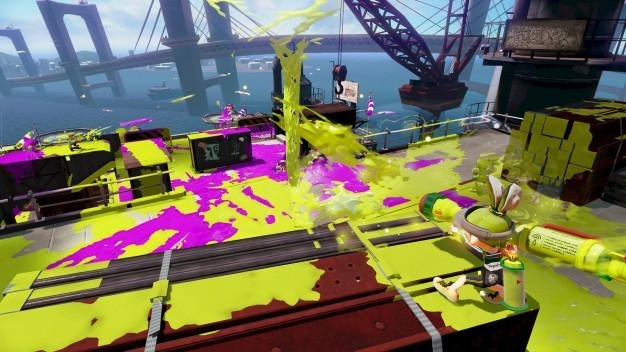 You can only play Turf War and the campaign with a single local player, but Nintendo has included some love for couch competition.  The Battle Dojo lets two players fight it out, but as this is Splatoon, your goal is still not to take down the other player.  Instead, the players rush to pop as many balloons as they can with their weapons.  It’s not the most exciting game mode, and it can turn one-sided quickly.  Still, in a world with so much online focus, there’s something to be said about playing with friends on the couch.  Finally, there is also a more competitive online mode too.  As you progress in Turf War, you’ll level up, which gives you access to new equipment.  At level 10, you can participate in ranked battles, which are exactly as they sound.  Right now the only type of ranked battle available is Splat Zones, wherein teams fight to cover a small part of the map.  Nintendo has already announced that it will release two new modes in a future update.

Because of the different goals, you have a wide variety of unusual tools at your disposal.  The player characters, called Inklings, are young humanoids that can turn into squid creatures, and back.  As a squid, you can swim in ink of your color, which has a bigger effect than one might think.  You swim much faster than you run, but you can also sit still in the ink, staying hidden until an unassuming opponent drops by.  You can also swim up walls through the ink, allowing for more navigation options.  Swimming also refills your ink, which acts as ammunition for all of your weapons. 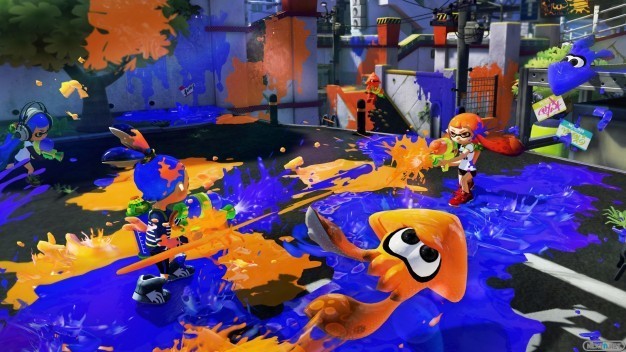 In humanoid form, though, it’s all about the weapons.  Primary weapons are split between three main classes: Shooters, Chargers, and Rollers.  Shooters tend to feature automatic fire and short ranges; they’re good for covering the ground around you and quickly dispatching enemies.  Chargers, as the name suggests, need to be charged up.  They can hit and a much higher range than the average Shooter and cover large areas with each shot.  Finally, Rollers are giant paint rollers.  They’re great for covering ink, but outside of a short range splash, they can’t do much about well aware opponents.  Within these categories are individual weapons that vary greatly, some pushing the boundaries of the category.  Though there aren’t as many weapons as in a traditional shooter, there is no shortage of variety.

Each individual weapon model comes with a sub-weapon and a special weapon too.  Sub-weapons are often bombs of some sort, but others include a locator for enemy Inklings and an ink fountain.  These tend to use up a lot of ink, so they need to be used wisely.  Special weapons run the gamut as well; the Kraken, for example, lets you become a bigger squid that leaves ink in its wake, jumping to splash your enemies with it.  The clear favorite, though, is the Inkstrike; this missile will go to any point on the map that you select on the Gamepad and cover it with your team’s ink.  Special weapons become useable over the course of a match as you cover ground and splat opponents. 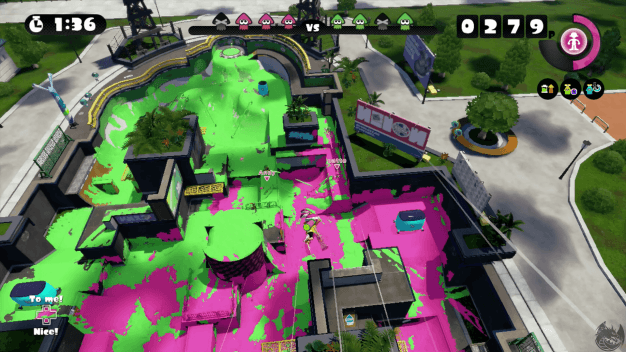 You can customize your Inkling’s outfit as well, and items of clothing each give you different bonuses.  Some increase your “ammo” efficiency, while others may increase your speed or boost your abilities at the very end of a match.  The game’s main hub includes a shopping area called Booyah Base (there are a lot of aquatic puns in Splatoon) which features four stores: one for weapons, one for head items, one for tops, and one for shoes.  The selection for clothing will change each day, while the weapons are unlocked for purchase as you progress.  This is Splatoon’s biggest problem.  Right now, there is no matchmaking.  That means a level 1 player stuck with the game’s starting gun can easily be placed against a level 20 player with the best equipment the game has to offer.  Once eight players are gathered online for a Turf War, teams are decided randomly.  Ideally you’ll get a good mix, but that isn’t always in the cards.  In one match I played at level 9, all of my opponents were at level 20, the maximum level.  Now, you can defeat enemies at a higher level if you know what you’re doing, but it does put you at a disadvantage.

Nintendo has consistently been adding new maps and weapons to the game with free updates, and plans to keep doing so for a while.  Fortunately, there are also new modes and options on the way to deal with some of the issues.  That is another common complaint: the game felt somewhat sparse at launch, and still does.  There aren’t too many stages or modes, and those numbers pale in comparison to something like Halo.  The updates have already alleviated most of the content concerns, though, with future updates hopefully fixing the rest.  There’s no level matching on the way, but Nintendo is planning to launch party matchmaking and custom battles soon.  There are few details so far, but one hopes that custom battles will have level limits.  Either way, it’s very good that this content is coming, and that it’s free.  Splatoon still feels smaller than a Call of Duty or Battlefield game, and that may irk some, but at least it now has enough content to more or less justify the price. 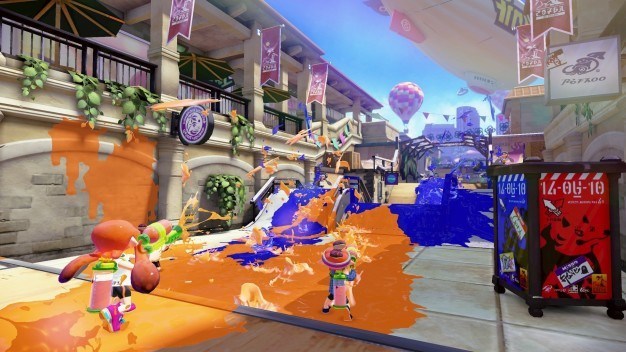 Ultimately, what brings everything together in Splatoon is its community and style.  The bright and colorful urban motif permeates the entire game.  There are a few popular clothing brands, NPCs spouting urban slang, an obsession with style, and appropriately, graffiti throughout.  The only areas not bright and colorful are the dark parts of the single player campaign, which only serves to amplify the stark difference between the Inklings and the Octarians.  The style is wonderful and fairly unique, bringing players into the game’s world even with a relatively light plot.  Splatoon’s community is also quite pleasing.  Throughout the hub area are other players’ Inklings, often displaying Miiverse messages (which can be sent via a mailbox in the hub).  Between SpongeBob memes and posts using #LoveWins after the recent landmark Supreme Court decision, it’s easy to see that these will be good people to play with.

There are two other minor things that should be noted, one positive and the other controversial.  On the positive side, while you are waiting in the lobby for an online match to start, you can play a minigame on the Gamepad.  This is a great way to add some fun to the most boring part of an online game, and I’m surprised that more games don’t do something like this.  You start with just one, but you can unlock others, and that leads right into the more controversial note.  Splatoon supports its own set of three amiibo figures.  Each one offers challenges for 20 of the single player campaign’s levels. Completing these challenges unlocks a special piece of equipment for each of the four types (weapon, head, top, and shoes) along with a new mini game.  Without getting into the debate about whether it’s OK to lock down things that are on the disc, the immediate issue is that the amiibo are very difficult to find.  Most stores sold out on the first day, and the Inkling Squid amiibo, which only came in a three pack in the US, is already selling for ludicrous prices online.

But these are just extra things.  A game lives and dies by its gameplay and its style, and Splatoon nails both.  By taking online shooters from a different angle, Nintendo has produced a unique new brand that makes online action much more friendly and accessible.  Though content is still somewhat light, Nintendo continues to add to the game regularly and for free.  There’s enough for both casual and competitive players to get their fill, and there are very few games that entice both.  Splatoon is ultimately one of those games that you can’t really understand until you play it, and I recommend doing so right away.