This weekend saw much of Europe’s gaming development community descend on London for the 2015 Golden Joystick Awards. This prestigious event is now in its 33rd year, and the times sure have changed since Manic Miner and Jetpac walked away as winners back in 1983. In fact, I’d go as far to say that modern consoles now allow us to almost triple the amount of pixels allowed on screen at any one time. 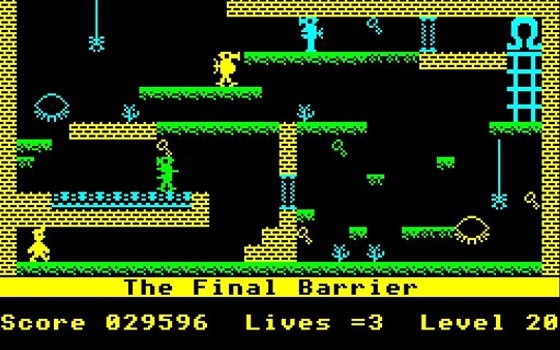 Although I remember reading the results of the GJAs in such classic “computer game” magazines as Crash! and Your Sinclair as a young lad, this was my first opportunity to attend the ceremony itself, meaning I would actually have to make myself presentable (another feat only achieved by modern technology). So I put on my best and made my way to the heart of London’s docklands and the O2 arena (formerly The Millenium Dome), the site chosen to reveal the winners of the mighty twenty-six categories, as voted for by you guys, the beautiful gaming public. 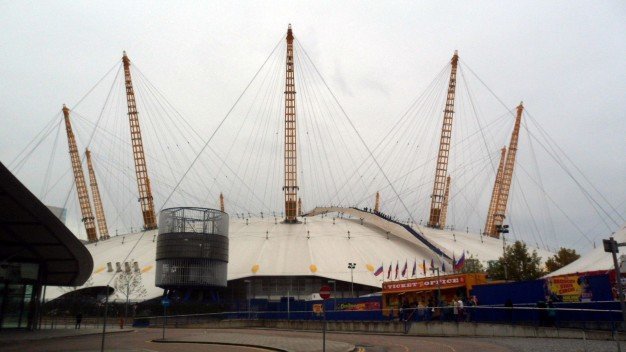 O2 arena (Not pictured: Pierce Brosnan rolling down the side

Greeted by the PR team on arrival, I was shuffled into the VIP bar of the indigO2, a theatre within the O2 complex, and plied with chicken burgers and free booze, I assume it was free, it wasn’t like anyone asked me for money, or that I offered the same. Awaiting the award’s 3:45 pm kick-off time, I met Chris and Jade, two exceptionally friendly cosplayers who had been commissioned by Ubisoft to attend the show as Assassin’s Creed Syndicate’s Jacob and Evie Frye. They were both stoked to have been afforded the opportunity, though Chris turned down my suggestion that he dash across the dome of the arena and dive off into a pile of leaves. 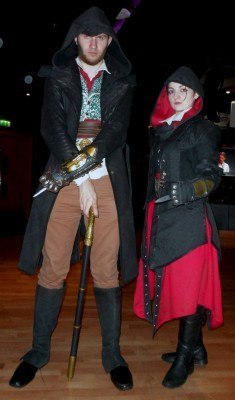 Just before showtime, me and my fellow journos were shown the way to the balcony arena of the theatre, in front of an impressively lit and colourful stage setup. Below us were the huddled masses of award nominees and friends, including representatives from Rocksteady, Ubisoft and CD Projekt RED, among many others. Spotlights of red and green swept the room as people nervously chatted amongst themselves. 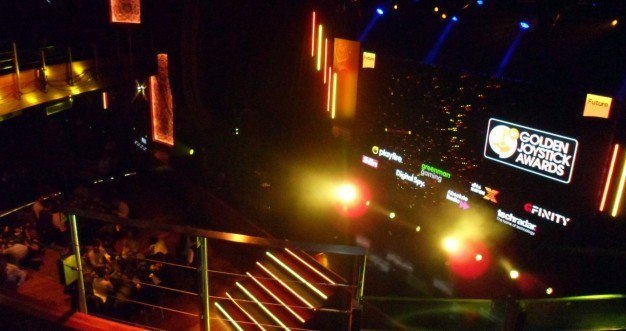 The show began with a slick video and light show, before comedian Danny Wallace took to the stage to host the whole affair. Wallace was on fine form throughout with playful, but very true, jabs at 2015’s gaming controversies. Wallace had a stab at the PC Arkham Knight debacle, the Assassin’s Creed Unity bugs and a nice line about the sexism often found within game narratives. All of his jokes received nervous laughter from the audience who are, of course, the very people responsible for the punchlines.

Here are your Golden Joystick Award winners for 2015: 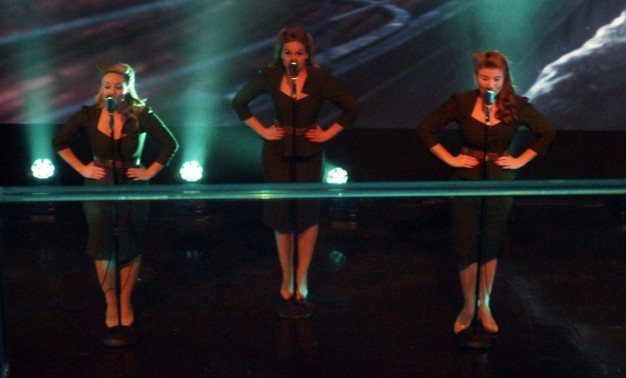 At the halfway point of the show, courtesy of Wargaming, we had a great WW2-style number from a trio of incredibly talented gals known as the Bombshell Belles. Then it was back to the awards. Frankly speaking, the attendees had become a bit blaise by this point. Applause became an almost Pavlovian response, rather than genuine appreciation. Some results were even greeted with disgruntled groaning.

I personally thought this was a bit of a weak attitude, as a show’s importance is built on its audience reaction, and if we want videogame awards to have a degree of respect then we should make an effort to build up an exciting atmosphere. But then again, maybe everybody was just hammered – free bar an’ all, y’know? 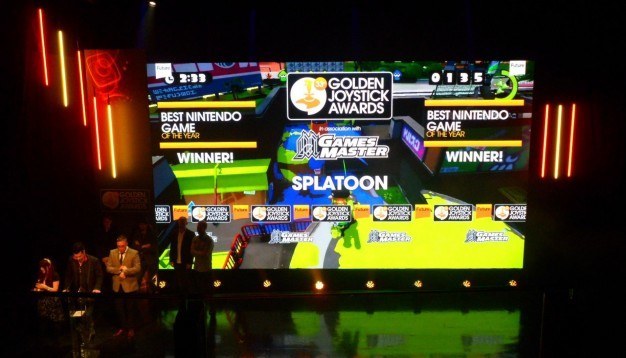 Clearly, CD Projekt Red had an incredibly successful night with their acclaimed title Witcher 3. There were also strong showings from paint ’em up Splatoon, which beat out Minecraft no less, for best family game.

Arkham Knight was nominated in many categories but failed to win the public vote, and Sam Barlow’s FMV mystery Her Story also had a solid showing. The one non-publicly voted award, the Critic’s Choice, went to the fantastic Metal Gear Solid V. 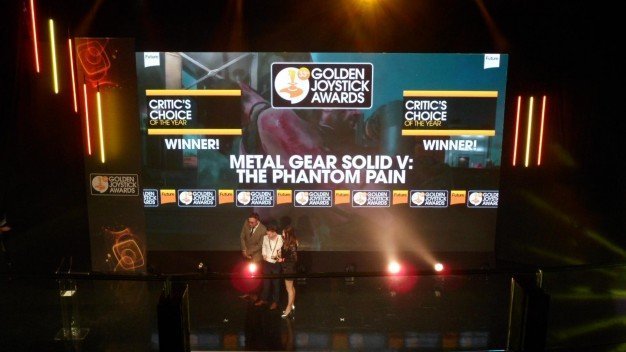 With all the winners revealed, Wallace closed the show, inviting everyone back next year for the newly renamed “Golden Pachinko Awards” and then we were all let loose into the chilly Autumnal night. I made a brave effort to attend the exclusive after party, held at the nearby Brooklyn Bowl. But unfortunately they had a “No Sexy Bastards” policy and, after a failed attempt to squeeze through a toilet window, Agent 47 style, I decided to call it a night. 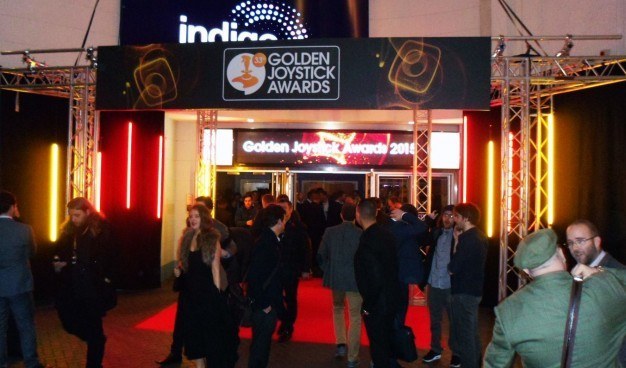 I was fortunate enough to bump into host Danny Wallace and Her Story’s Viva Seifert, and we had a brief chat where I congratulated him as a fine comedian and her as a fine actress (or maybe it was the other way ’round). They were both in wonderful spirits and clearly enjoying the evening’s events. A nearby suit told Seifert that he had yet to see her performance in Life is Strange, which is probably on account of her not being in it.

And that was the end of my evening, with only a short tube journey and a narrowly avoided brawl in the toilets of the Jubilee Line between me and home. 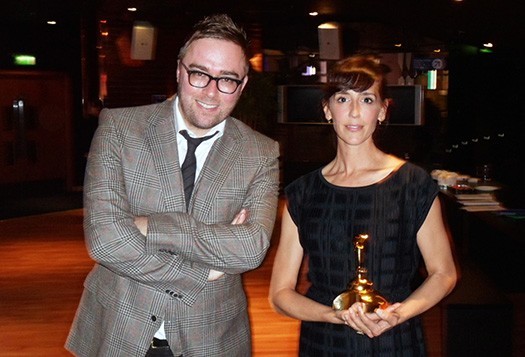 In summary it was a slick, nicely produced and brilliantly hosted show. As for the results themselves, I’m happy to see Witcher 3 get its dues. The idea of an FPS mode in GTA being an “Innovation” is ridiculous.

Arkham’s losses may be more due to public displeasure of Warner Bros. rather than any fault of the base game, and it was a shame that Elite: Dangerous didn’t scoop up Best Audio, which it thoroughly deserves. Regardless, congratulations to all the winners and nominees. 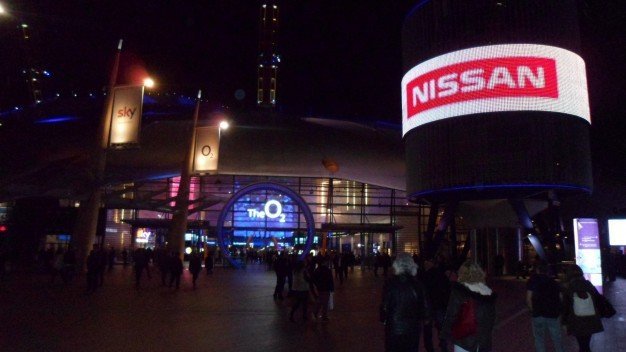 The Golden Joysticks, publicly voted, is the voice of the people, who are ultimately the money spending consumer, and as such the awards may be a reflection of what people actually purchased and played over what was out there and available to play. But it is vitally important that the customer has a voice, and the GJAs is one of the few ceremonies that provides it. Here’s to 2016 and another year of marvelous games, produced at all levels and all budgets, across all genres. Though we may not have physical awards to display we, as videogame lovers, are always the winners.

Thanks to Ben Pester of PesterPR, and Arthur Damian and Kristen Spencer of this fine website for affording me the opportunity to attend, as well as the staff of the GJA and indigO2 for their hospitality.

About the author: Chris Moyse

Having played videogames since the mid 80's, two facts become instantly apparent: Chris is arguably as important to the industry as Dragon's Lair, and is also old enough to get into bars without...  Read more...