Mordheim is truly a city of the damned! Based on the Games Workshop 1999 Mordheim tabletop game, Mordheim: City of the Damned is a tactical turn-based strategy RPG videogame set in the Warhammer Universe. Yes, yet another game released this year set in the Warhammer Universe, alongside Vermintide. Previously in Early Access on Steam, it was officially released November 19th. I honestly haven’t been following the game through the Early Access, so I won’t be commenting on how this game has grown. Although originally this was set to be a preview, because of the recent release (and me being a bit behind on what’s out there in the Early Access realm), you readers now get a review of the game! 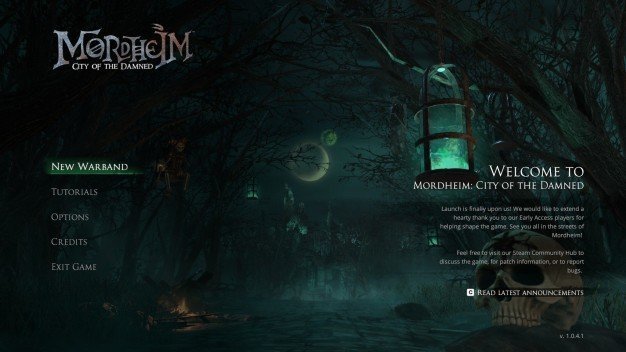 So what’s the story? A twin tailed comet crashed into Mordheim as retribution for the sins of the people who lived and exploited the city. Following the destruction and chaos, the space dust settled and the citizens discovered odd stones that the comet left behind. These odd stones, called Wyrdstones, have incredible magical properties and have quickly become the most valuable commodity in the Empire City. You are in charge of a warband who is scouting out the ruins of Mordheim to recover these Wyrdstones for factions in exchange for glory and riches. But you sure as hell aren’t the only group wanting to covet these magical stones, and that’s where the strategy of their recovery comes into play.

Mordheim: CotD greets you with an opening screen that is simple enough. However, the game is very deep. Reading through some of the Steam forums while the game was downloading suggested any new player go through the tutorials first before attempting to create a warband. So here it is: this game has a pretty steep learning curve. I went through all the tutorials on both combat and warband management, and still had a lot of questions. The community will definitely be a huge help if you decide to go all in on Mordheim. And I have a feeling that will be an incredibly rewarding (and painful) experience. 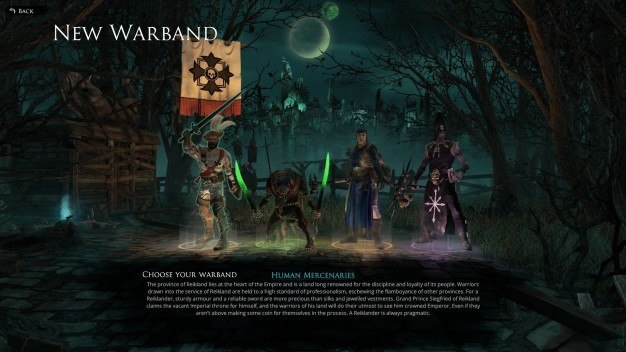 Setting up and controlling your warband will task you with recruiting warriors, thieves, mages, and monsters from four different warband factions to help you gain your riches from Wyrdstone recovery missions. These include the Human Mercenaries, the Skraven Clan, the Sisters of Sigmar, and the Cult of the Possessed. My immediate inclination was to play as the Skraven (rat people), but I decided to go vanilla with the Human Mercs as my starting warband for this review. Apart from these competing warbands fighting you for Wyrdstone on the map, there are also monsters and demons that roam the map that will attack anyone in sight, adding to the already brutal difficulty.

While I read some complaints about the number of warbands available to choose from, the customization of each character in your warband means that no two warbands will be similar. The RPG elements are customizable to your playstyle, so you can have your gun-toting, dagger-wielding mercs wearing heavy armor if that’s what you want. After each battle, warband members gain experience points and possible bonus points for skill allocation based on their performance. Not only do characters level up, but your warband will also level up, unlocking the ability to add more members or buff the stats of your warband across the board. 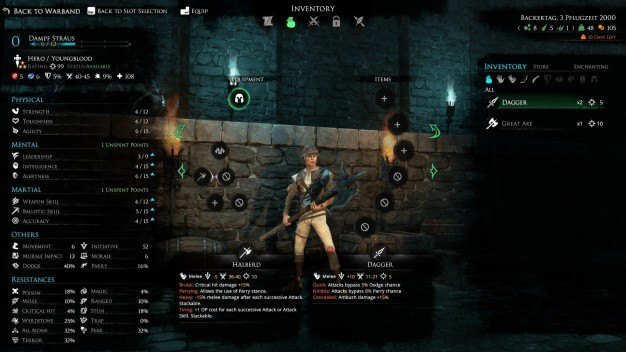 Apart from your henchman/mercs that you hire, you also have a hero character that is more advanced than your typical merc. This character usually has added abilities to start with OR additional stats that give them more HP or strength. You also have a leader who is easily the most important character in your warband. Losing your leader in a battle can spell an early exit from the expedition, resulting in a loss. Therefore, taking out the leader in their faction can result in the same outcome with a victory for you.

The in-game combat becomes tricky in the incredibly hostile environments. There are seemingly traps everywhere you step, so perception checks come in handy. I began recognizing what traps looked like through later playthroughs, so I started taking my chances to save on valuable action points. Luckily, a secondary overhead screen can help you see your enemies (if spotted) and any potential dangers that you can mark with a beacon to remember. 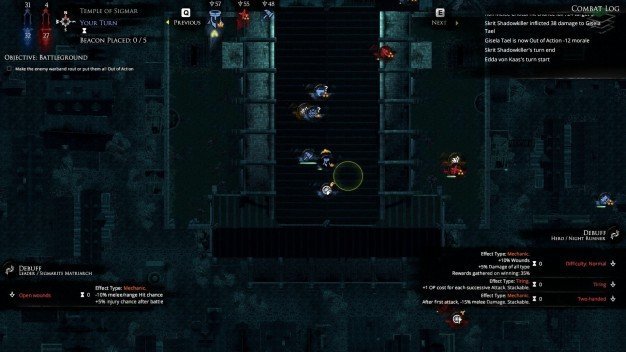 There are two different point systems your characters adhere to when its their turn, stamina points (SP) and offense points (OP). SP controls everything from how far you can move per turn to reloading a ranged weapon to defensive stances in battle. OP dictates your attack and spellcasting abilities. An interesting aspect of casting is that Mordheim curses spells, so casting an offensive attack spell could result in a curse that decreases your ranged resistance. It’s a gamble, but you can also gain positive curses, which might add to your resistances. Again, this game can be brutal, so there is a lot of strategy in determining when you should use those spells. 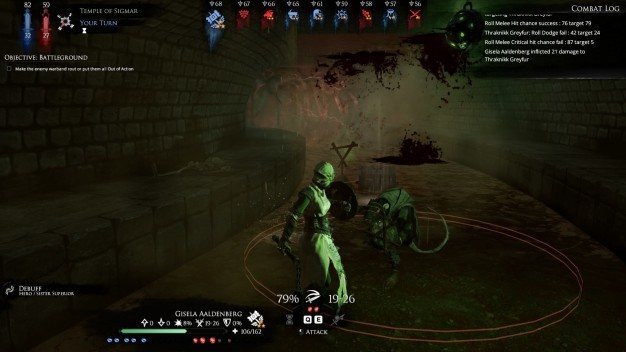 The outcomes from these battles can have dire consequences if you lose. Losing a leader to treatment can result in several days waiting for them to recover, losing precious time to complete the Wyrdstone shipment. Angering your sponsor who wants the Wyrdstone can quickly put you out of a job, and you may end up creating several warbands from scratch until skill (and luck) goes your way. This game is meant for hardcore strategy gamers who I think will really enjoy the challenges Mordheim: CotD has to offer. However, there is some accessibility for players like me who are experiencing a game like this for the first time.

Mordheim offers campaign, skirmish, and multiplayer modes. I didn’t have a chance to test out the multiplayer mode as I felt I was no where near ready to tackle this at my skill level. Although, there may be a lot more noobs like me out there to practice on, so who knows. Check out some YouTube clips of some multiplayer skirmishes to get an idea of what the multiplayer mode offers. I personally sunk all my time into the campaign mode, but I really enjoyed it! 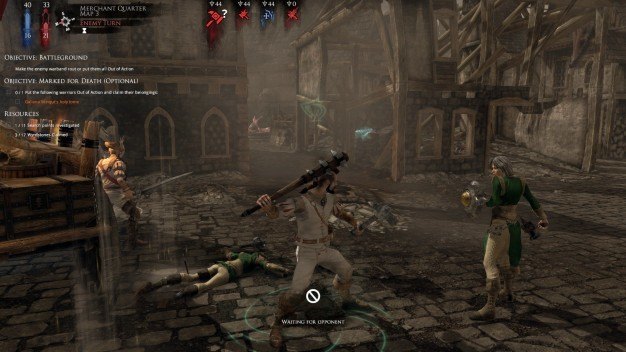 Mordheim: CotD is an excellent game for those who enjoy planning and strategizing the crap out of a game. While I tend to shy away from these types of games, I found myself really enjoying Mordheim, and I am already thinking about how to progress my warband called “The Last Company” after I finish writing up this review. Developer Rogue Factor seems very keen on updating and keeping things working smoothly, and it definitely shows in this game. Pick up Mordheim: CotD on Steam and you won’t be disappointed. Heck, you may even put down Fallout 4 to play it.

This city be damned!

A quality game that has lots of depth, strategy, and replayability. Definitely for the diehard tactical strategy fan, but Rogue Factor has made this game accessible for more than just the hardcore audience.