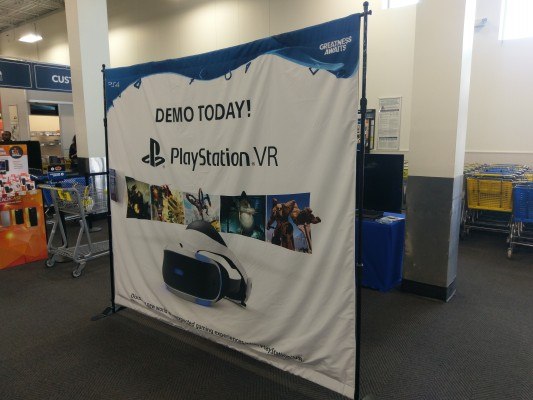 Have you experienced the PlayStation VR? I got a chance to test it out at a recent demo at Best Buy. Sony rolled out demonstrations to a lot of Best Buy locations across North America to give users a chance to try out the upcoming VR system on their own. While it wasn’t as intimate as my experience was with the HTC Vive, it was still a great opportunity to test out the hardware before it launches in October. 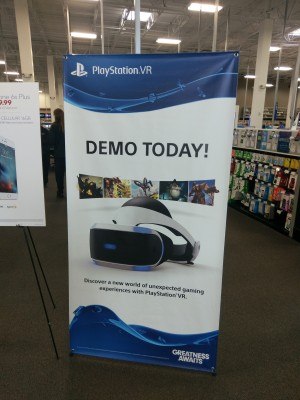 I sat down in a chair sitting in front of a HD TV and waited to be hooked up. The headset was comfortable and felt very similar to the Vive and Oculus Rift. The appearance of the headgear looked a bit gimmicky compared to the competitor options (gray, blue, and black concoction in the picture below), but its branded to look like a Sony PlayStation component, so we can forgive that. Headphones were a Sony Wireless brand (not sure which), but the guy running the demo said you can use Sony Gold Wireless as well (which he had hanging around his neck). I have these at home and they’re a great pair of headphones for the PlayStation 4 (I highly recommend them). 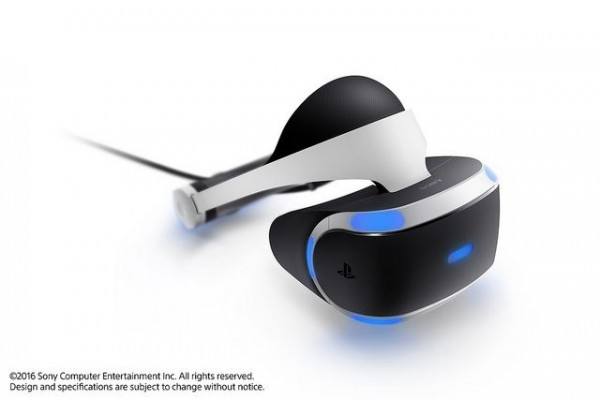 I quickly oriented myself on the PS Home screen and picked the EVE: Valkyrie demo. This demo is all about flying around a sweet spaceship and taking out your enemies with the help of a computer-AI fleet of fighter spaceships. It was pretty weird to look down and see a pair of digital hands gripping the steering apparatus. I was able to look around the cockpit and orient myself to my immediate surroundings before I was thrust out of the docking station like a bullet from a gun. 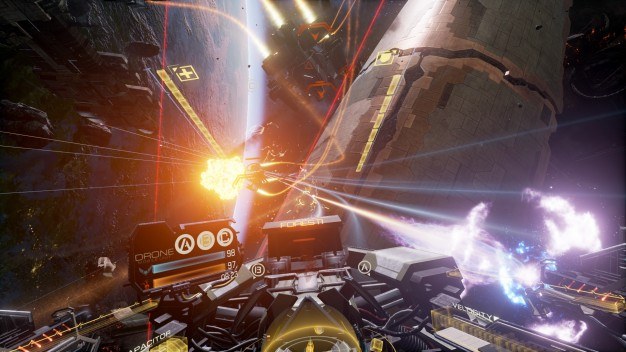 Controls were simple enough, but they were hard to get used to right away. I wanted to look at my target and fire moving my head when I should have been using the controller to accomplish this. In this demo, moving your head it just to look around in space – it was pretty cool to look up and watch an enemy zoom by you. The graphics looked great and it felt believable from a VR point of view. However, I wasn’t as immersed in the experience as I would have liked to have been, and this may have just been the consequence of sitting in a Best Buy with a line of people behind me waiting to try it out. I took down a good number of ships until the demo started deciding it was time for me to go. 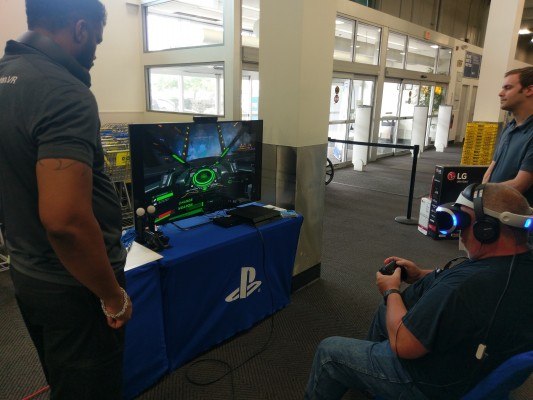 In reality, the demo was over way too soon, but I would definitely mark this as a positive experience. My wife tried out the underwater demo from PlayStation Worlds and said she really enjoyed it, although she said she felt a bit dizzy from it. This is similar to the undersea Vive demo I tried, but you are sitting in a shark cage underwater in different locales, and while it seems calm at first, I think you can guess why you’re in that cage in the first place. 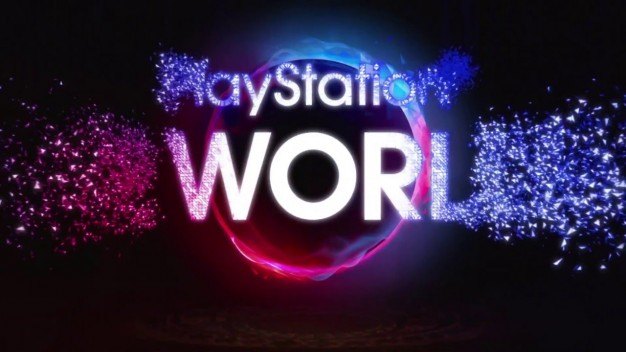 At this point, I can only say that I am looking forward to what Sony has to bring to the table with regards to the PS VR. As with the other VR units out there, people need to try them out to get an idea of what they will ultimately want to invest in. Hopefully more demo units will become available for this to be accomplished.

For more information on the PlayStation VR and pricing, head to www.playstation.com/en-us/explore/playstation-vr/.