Wizard World Comic Con Chicago 2016 happened over a four day engagement, from August 18-21. While some recent national headlines from the con include the presence of an actual firearm dealer in the Chicago area (albeit selling replica weapons), regional and national attendees were treated to a great celebrity lineup and panels galore. But in between the comic vendors and the cosplay, the one true passion near and dear to my heart was kicking it hard all weekend: gaming. 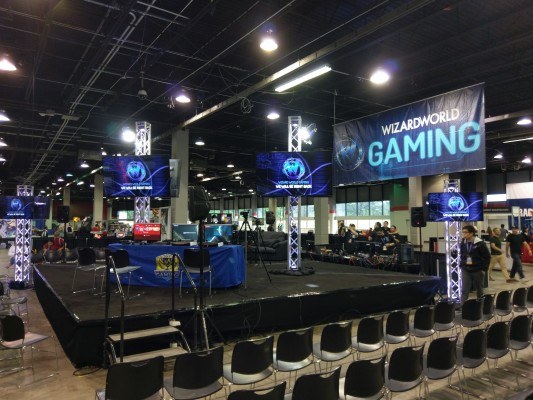 Problem with showing up early… no one was there!

I was delighted to see the Wizard World Gaming Tour set up on the top floor of the convention center, greeting attendees with an electric distraction from the comics and toys down on the main floor. WWG was broadcasting all weekend on Twitch and hosting tournaments for games like Super Smash Bros. Wii U and Guilty Gear XRD. I personally got lost watching these guys play Overwatch for a good hour. Along with the tournaments, they hosted some special events including the “Start Your Creative Engines” panel and “Tekken 7 Fated Retribution – Challenge a Pro”. If you have some time to kill or want to know what you may have missed skipping out this year, check out their Twitch page in the earlier embedded link.

Bandai Namco had a huge floor set up for attendees to test out some unreleased titles, including Dragon Ball: Xenoverse 2 and God Eater 2: Rage Burst. I sunk a good amount of time into the new DBX2 and thoroughly enjoyed playing as Super Saiyan Goku just demolishing my opponents. Once you get a feel for the movement and camera, you slip right into the battle. Special moves (Kamehameha!) looked and felt so good. I think that the 2nd installment will be an improvement on the 1st one when it hits in late October of this year. 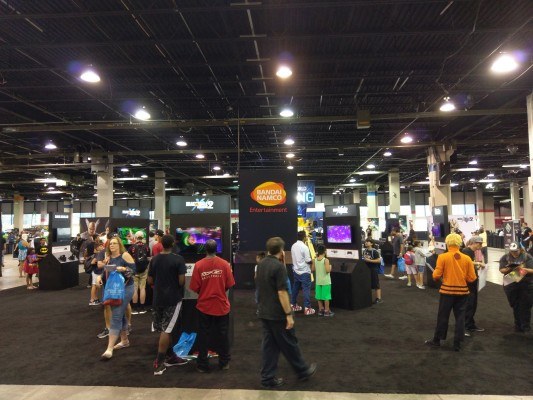 I also played Dark Souls 3 and died like 20 times.

I played God Eater 2: Rage Burst for a little while, but it just didn’t suck me in like DBX2. It felt like a clunkier Monster Hunter game, and honestly I think Capcom has got the genre locked down. I really appreciated the giant inflatable beast from the game that stared at us all day long at the Bandai Namco booth. I’ll be interested to see what people think when it releases in North America on August 30. 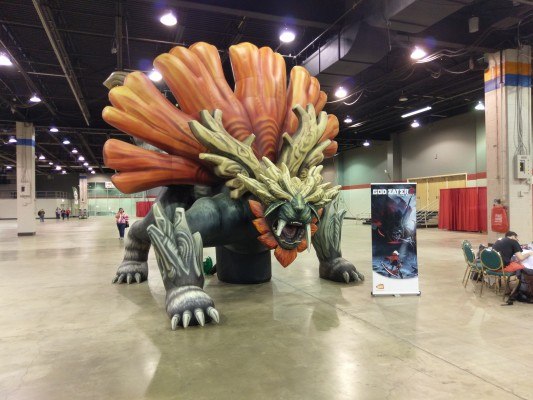 Not pictured: its backside.

Geico was also in attendance trying to show off its gaming cred. The booth was sleek but I didn’t attempt to head over there due to the lurking Geico people waiting for me to come over and sign up for something or other. They were taking pics for a personalized Hearthstone card with your mug on it, but I still resisted their seductive sleek booth. I really Appreciated the old school TV setups though. 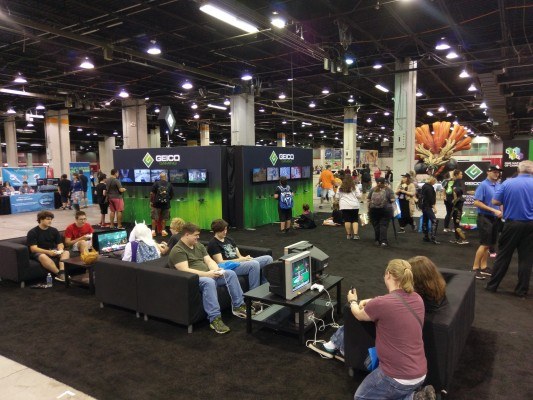 15 minutes could save you an extra life.

Gameworks and Extra Life were in attendance as well, offering gaming opportunities for those wanting more than Bandai Namco titles. Extra Life is a great organization and I would encourage everyone to check out their website to learn more about their charity work. Gameworks had a pretty decent selection of games and their own tournaments going on all weekend, which took pressure off those who didn’t want to compete live on Twitch at the Wizard World Gaming section. And lets not forget about tabletop – guests could grab one of many board games available to play with friends while waiting on the next panel or autograph session. 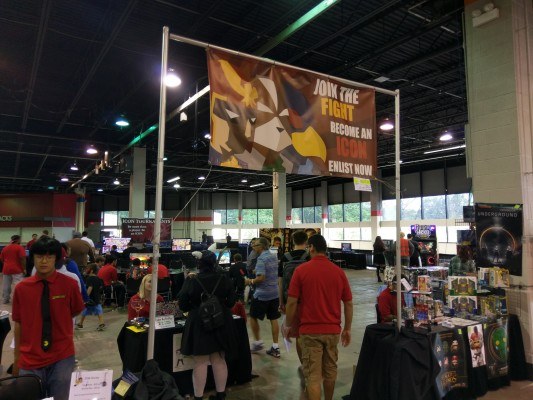 Yes, they had a Guitar Hero arcade unit!

All in all, most of the gaming was relegated to the upper floor, but there were vendors down on the show floor selling classic games and gaming collectables. Tons of artists had some beautiful displays of art that made me want to shut up and give them all my money. I was particularly blown away by the work of Marinko Milosevski, whose artwork was oozing with video game goodness in very stylish prints and posters. I highly recommend perusing his work here and supporting these sexy pieces of art.

Don’t forget to check out TVGB’s list of the top laptops of 2016!