Rick and Morty’s Justin Roiland has announced that he is teaming up with former executive producer for Epic Games, Tanya Watson, to create an all new VR game studio called Squanchtendo. Roiland, who has been working on a Rick and Morty VR experience, made the announcement through a one page comic explaining the founders and their backgrounds as well as offering up job opportunities. 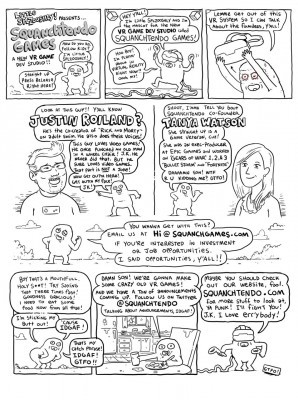 In an interview with Gamespot, Roiland has stated that “[he’s] so inspired by what you can do in VR. Just the capabilities of VR as a tool or medium for storytelling.” Roiland went on to express how the potential of VR storytelling perfectly overlaps his heavy interest in gaming and the gaming community. When asked what she hopes to accomplish with Squanchtendo, Tanya Watson stated “I think that in games, there haven’t been many comedians and many people working in this field that know how to make comedy really funny in the game space. For me, that is one of the things that makes this really interesting.”

Personally, I think this is amazing news. I can probably count the number of genuinely hilarious games I’ve played on one hand and if anyone can right that wrong it would be Justin Roiland. He has a brand of humor that just gets me every time. Also, Tanya Watson has a very respectable resume as the executive producer of big name titles like the Gears of War trilogy. I’m eagerly anticipating the first big announcement from Squanchtendo. Roiland and Watson may have just sold me on VR.