The game studio that brought us Contrast in 2013 is back at it again with their upcoming title, We Happy Few.  Compulsion Games is hard at work crafting its next stylized adventure that promises to dose you with just the right amount of paranoia and survival, in a drugged-out, dystopian English city in year 1964.  While the game is not officially due out until later this year, you can play an early version of the game via Steam Early Access and Microsoft Game Preview.  You don’t get to know any of the character’s stories at this point, but getting in now allows you to get a taste of what you can expect from your time in the game.  In addition, you will get a jump on a few of the games systems so that you get familiar with them and maybe even pass along your ideas to the developer. 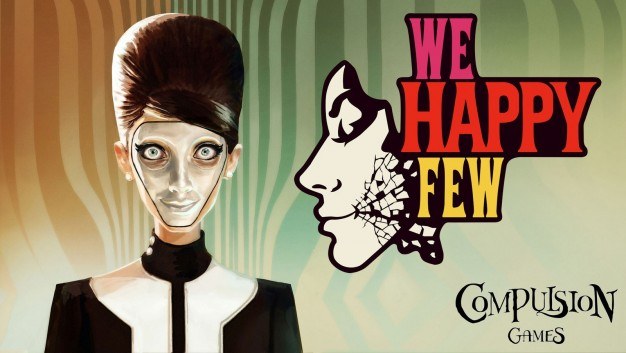 In a nutshell, We Happy Few is the story of “a plucky bunch of moderately terrible people trying to escape from a lifetime of cheerful denial.”  In this alternate 1960s England, the drug “Joy” is all the rage and if you are not taking it, there are consequences and sometimes its fatal.  Being depressed or not enjoying what you are doing is severely frowned upon so Joy is the key to eternal happiness.  However, if you are found to not be taking your Joy, there is never a shortage of individuals who will be very quick to expunge you from the collective by any means necessary.  This society is based on more than just “group think” to the point that this could almost be considered a cult. 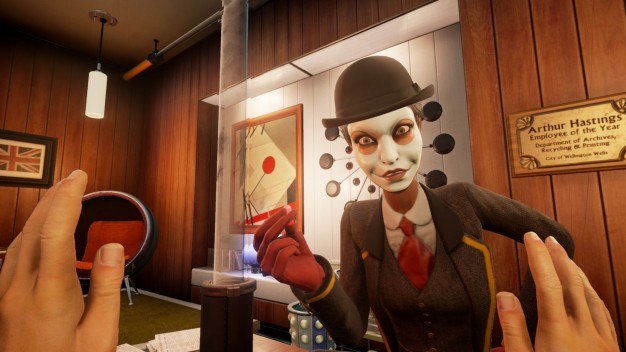 We Happy Few opens with you at a desk doing your job of approving or “redacting” news articles that could be considered a “downer.”  After all, who wants to open a newspaper and read depressing stories about unfortunate happenings in the world?  After pushing through a few articles, a female co-worker comes into your office and she immediately senses that something isn’t right.  She walks to the side of your desk and notices that one of your pills of Joy is lying on the floor and asks you if you are keeping up on your dosage.  After assuring her that you are, she leaves the room and reminds you that there is a party going on in the break room.  You, of course, have not been keeping up with your daily Joy intake and the effects are slowly starting to wear off. 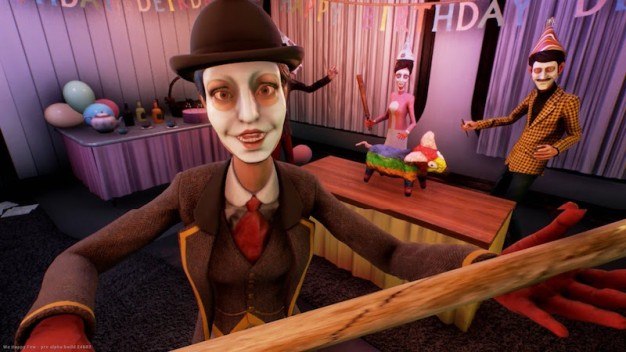 As you get to the break room, that same female coworker hands you a stick and tells you to bust open the pinata that is sitting on the table so that everyone can grab up the candy goodness inside.  As she explains what to do, you are realizing that things aren’t what you have been believing them to be as you begin whacking away at the pinata.  Once you bust it open everyone runs over and immediately begins to grab up the candy and starts shoving it all in their mouths.  At this same moment, the last remnants of your Joy wear off and you realize that what you busted open was no pinata and what your coworkers are shoving into their mouths is not candy.  What is on the desk is a huge rat that is still twitching and your coworkers are eating its entrails with reckless abandon.  At this point, your revulsion is clear and everyone in the room immediately turns on you, grabs the nearest weapon and comes after you. 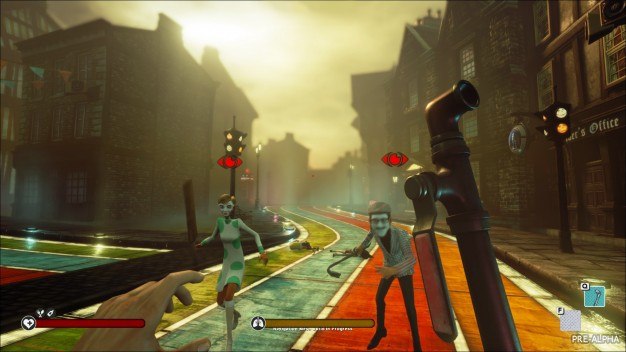 As you make your way out of the offices to safety, you get a taste of the fighting mechanics as well as the crafting and puzzle aspects of the game.  The developers have stated that there will be no guns in this game but you will be able to fend for yourself using sticks, pipes and other improvised handheld weapons.  In addition, you will need to collect raw materials from your environment in order to craft items like lock picks, healing salves and other items to make it through the story.  There is also a very robust health system that you will need to continually keep an eye on if you want to make it out alive.  There are gauges for health, thirst and stamina and it will be very important to keep them out of the red if you want to stay alive and able to withstand the rigors of this drug-fueled, retro-futuristic city. 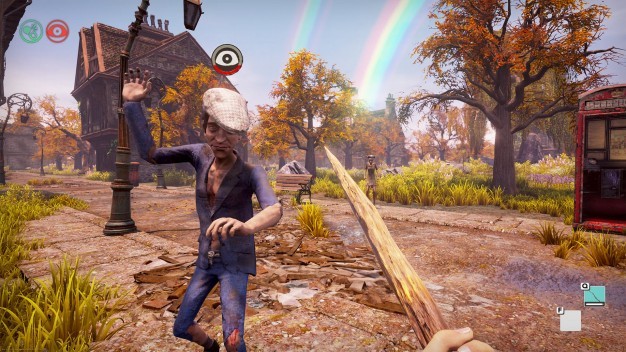 The game currently contains only about 50% of the procedural world but that is plenty to give you an idea of what direction the developers are taking with this game.  The visuals are very colorful and playful even though you spend a good amount of the game fending off threats to your well-being.  The overall environmental designs as well as the character designs are very stylized and reminiscent of the fashion styles of 1960s Britain, however, there is a warped aspect woven in to make the look of the game something that looks totally new and unique.  You may hear people compare this game to BioShock but just so we are clear, this is no BioShock. 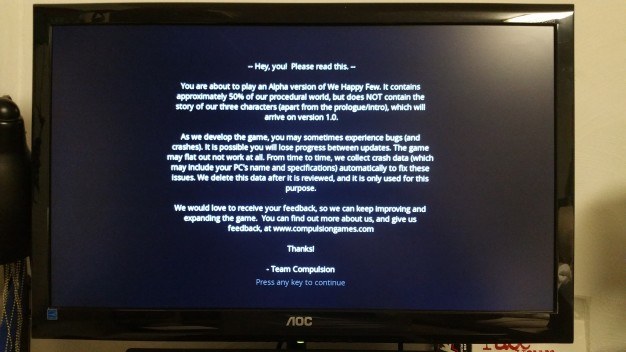 In its current state, We Happy Few isn’t technically a “game” because it is still very much a work in progress.  Releasing the game via Steam Early Access and Microsoft Game Preview was done so that the community could help the developer add the elements that players would find fun as well as to get information on how the game would run on different gaming platforms along with other useful technical info.  The game is heavily bug ridden and may not always perform smoothly, just so you know.  Improvements are always being added, however, there hasn’t been any updates since Aug 18, according to the update notes that you will see when you hit the games home screen.  You can get you hands on this early piece of the game for $29.99 in the Steam Store or in the Xbox Marketplace.  I think that this game definitely has potential but the story and the gameplay is going to have to be unique enough to stand out in a field of games that borrow heavily from other successful games on the market.

This preview is based on an Early Access version of the game provided by the publisher.