It’s funny to think that this may well be the last time I ever write a substantial piece on Fallout 4. It has quickly become one of my favorite games, devouring extortionate amounts of my spare time in spite of its flaws and unintentionally rendering my other recent purchases a little redundant. It brings me much sadness, then, to begin writing this review, knowing full well that its subject – the final DLC for Fallout 4, Nuka-World – is something of a full stop from developer Bethesda, and will (almost) certainly be the last installment of Fallout franchise for a good few years. Of course, what all this really means – apart from tearful writing on my part – is that Nuka-World has a whole heap of expectations to shrug off, being as it is the last hurrah for a titanic game. So I suppose the big question is this: does it deliver? 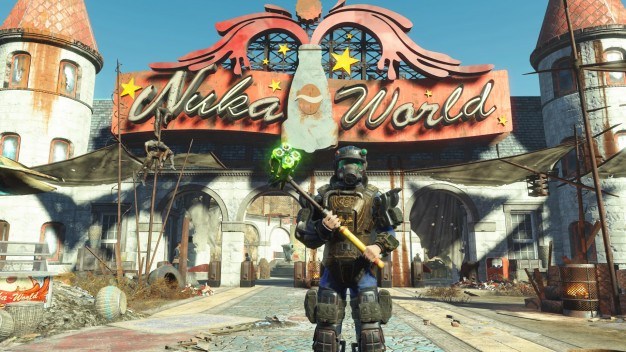 Day 1: Me, fresh-faced and armed to the eyeballs.

We all know that Fallout is every hoarder’s dream franchise, emphasizing the phrase “you never know when that might come in handy” to the point that every teddy bear, desk lamp, and pilot light in the Commonwealth, Capital Wasteland, and Nevada Desert will eventually wind up in your inventory. Nuka-World toys with this idea, offering gameplay that turns even your standard ghoul slaughter into a treasure hunt. The amusement park is filled to the brim with goodies, most of which are iterations of the mundane but some of which are a little more meaty; and whilst this fails to retract from the fact that the gameplay remains essentially destructive in nature, it at least lifts it out of the normal fare of Preston Garvey and into something a little more rewarding. 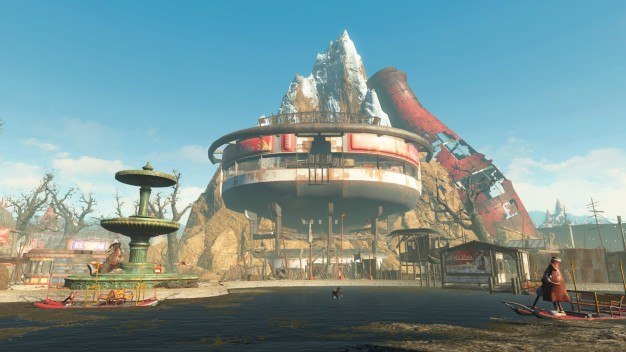 Day 2: Taking in the sights before bloodying my Super Sledge.

The vast majority of significant tasks that you complete yield rare weapons or unique items, as I have mentioned. These tasks will also, invariably, involve the introduction of some new threat to the Commonwealth; my particular favorite was the worms that made their home inside the carcass of dead Brahmin, which led to massively gory explosions as they burst free. Nuka-World even attempted the occasional boss battle of sorts, which is not something the simplistic combat system in Fallout manages particularly well, and yet there I was, taking on a raider in full power armor with nothing more than a shiny red pistol. And even though many of the new creatures were rather obviously just re-skinned from the base game, and the poor level scaling meant that those “boss fights” were over in an instant for my level 95 self, the core gameplay still just about managed to remain remarkably fresh for far longer than any previous DLC. 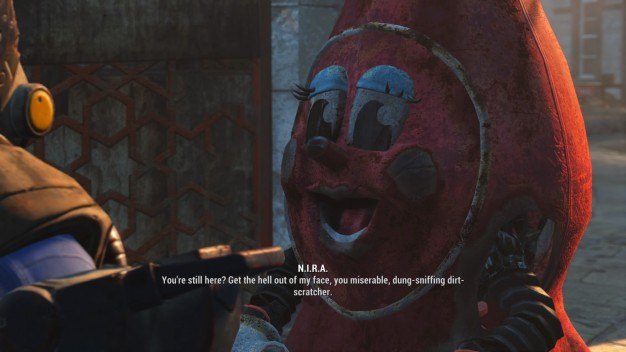 Day 3: Strange altercation with a walking bottle… We’ll ignore it.

Time to be brutal, and brutally honest. The plot that limps its way through Nuka-World is attempting to walk on a self-sustained injury: in other words, Bethesda have shot themselves in the foot, which is due largely to the wasted potential of the world itself. The gameplay shows the occasional glimmer of something more involved than the standard “go there, kill this” fare of Fallout 4 in its insistence on hunting down unique items or collectibles, but to be frank, 9 times out of 10 your primary objective is to clear an area of hostiles. Personally, I feel that this speaks to a wider course change for the series itself, due in part to the altered combat system, but the frustration lies in the fact that this DLC could have provided a well-earned break from the slaughter to give us some tales of depth and poignancy. 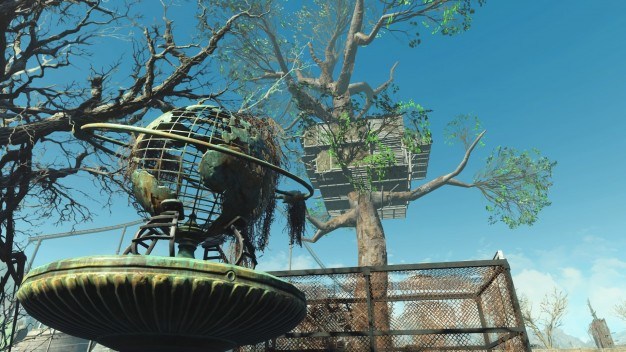 The central plot is a little flimsy, and whilst I enjoyed playing the bad guy and watching the gang leaders lie, cheat, and steal their way to pole position I have to admit that for one of the largest DLC packs ever offered by Bethesda, the simplicity of it all was a little disappointing. Don’t get me wrong, I was quite content as newly appointed “Overboss” of Nuka-World puzzling over which gang to raise above the others, and there was even a moment where a gang leader genuinely tricked me into slaughtering members of the Minutemen for the sake of his own crew; what Nuka-World lacked was the feeling that there was some ultimate goal toward which I was working, some culmination of my decisions and mistakes that would rear its ugly head once the story hit a crescendo. The story never once changed dynamic, and whilst the decisions forced me to think twice I feel like that was simply because the only options were to be nasty, or to be slimy. Or to be a sleazeball. 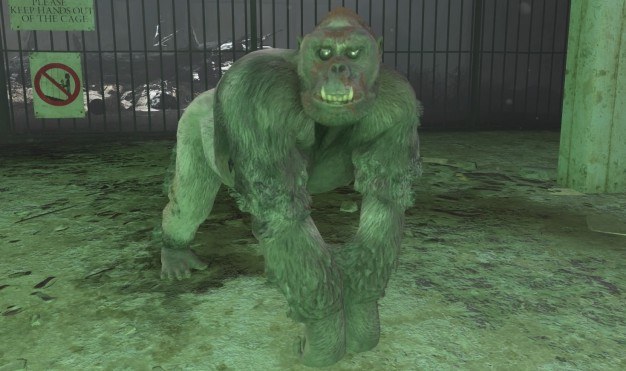 Day 5: Things are getting really weird… That’s a Ghoulrilla, folks.

Nuka-World is an expansive new environment, which perhaps makes the lacklustre story all the more infuriating. The park is nestled in a geological bowl, surrounded by mountains on all sides, with ruined freeways and rolling desert between the former and latter; giant Nuka Cola bottles aside, it feels a little like the Capital Wasteland, particularly when you explore beyond the walls of the park (which is, by the way, well worth doing). The journey to Nuka-World is undertaken by monorail through the mountains, which means that, once you reach daylight again, your first glimpse of the new world is from a wonderful aerial perspective – I liked the sense of scale so much that I even took a very artsy panorama (see below). 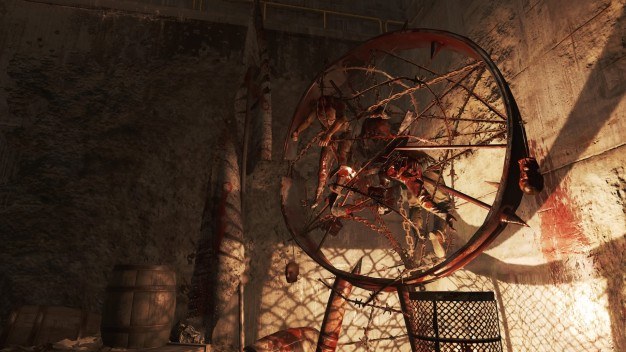 Day 6: Starting to wonder why I ever jumped aboard this wild ride…

Of course, once you find yourself within the walls of Nuka Town USA, or indeed any of the 5 other zones, the outside world fades into insignificance. Nuka-World is unique insofar as it cannot settle on one specific design; each corner of the park offers something entirely new, from a magical kingdom complete with turrets and crenellations to a full-sized recreation of the wild west. Even the raider factions inhabiting Nuka-World offer their own style to some degree or other, the highlight of which has got to be a penchant for fancy dress and the natural world. Complexity is the name of the game, and the attention to detail is at its usual high standard, particularly considering that this DLC offers a substantial number of interiors to explore. Where Far Harbor was beautiful in a dark and understated way, Nuka-World is gloriously extravagant, boasting a significant height advantage over its predecessor and the amazing ability to surprise the player with each new world. 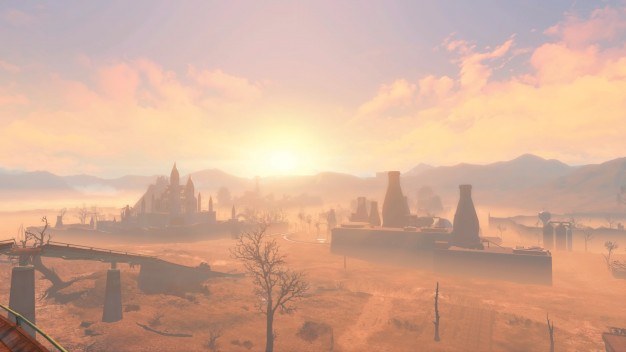 Day 7: Survived the crazy, reached the end. What a view.

Fallout 4 was the first game that I played to genuine completion, pressing on past the end credits to ensure that every inch of the vast open world had been meticulously scanned for hidden secrets, every settlement molded into a model of post-apocalyptic harmony; I know full well that I will continue playing long after the dust has settled on Nuka-World. For now, though, I think I would suggest that this last DLC is a little symptomatic of Fallout 4 in general: extraordinary potential, amazing design, but all encasing a very fragile and questionably executed game. If you’re looking for endless gunfights with the occasional burst of originality, look no further; if you want a story-driven RPG experience, I suggest you pick up a copy of Fallout 3.

The final DLC for Fallout 4 is a stunning example of what happens when a game developer puts their mind to the task and still manages to come up short. The world is nicely designed, and speaks to an understanding of how Fallout ought to look, but like the many new creatures that inhabit Nuka-World, it does not take long to realize that this is still simply the same base game, with a shiny new suit.