We have all seen (and likely played) the atypical zombie apocalypse story. A zombie-attack survivor joins a community of other survivors who fight and struggle everyday to stay alive. A simple formula but a classic none the less. In that sense, Headup Game’s new zombie survival RPG, Dead Age, doesn’t offer you anything you haven’t seen before. 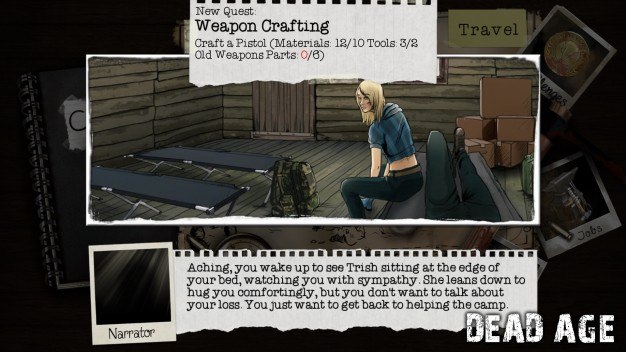 Here’s a quest to craft a pistol.

The lone survivor plot is essentially the story of Dead Age as well. However, Dead Age offers an intimate perspective I haven’t seen before in a zombie survival. To put it simply, if a zombie apocalypse ever does happen in real life (hopefully not), I can see survivors living very comparable lives and making similar decisions to those in Dead Age.

Dead Age runs on a day-to-day time system. You wake-up every morning and get various reports and information about what may or may not have happened the previous day/night.  I approved of this time system because in a world filled with hordes of zombies, every day really could be your last. The same goes for Dead Age but more on that later. 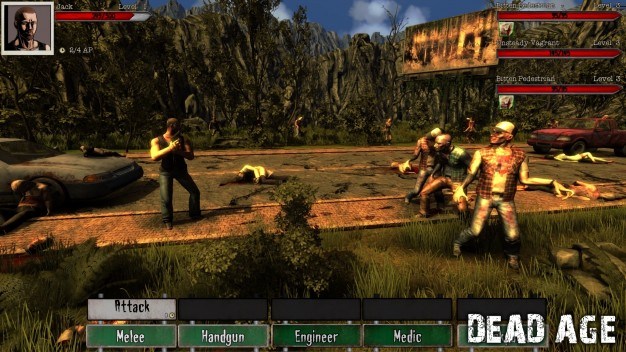 Another thing you may get in the morning are quests. Most quests have a time limit on them, giving you usually 0-2+ days to try and complete them. And while some quests are more important (and more dangerous) than others, all will benefit you and the other survivors nonetheless. But just because you’re given a quest doesn’t mean you’ll be able to complete it. Dead Age is filled with quests and random events that might cause you to make difficult decisions. For instance, you could either rescue a new survivor or go hunting for food because you’re running low.

Sticking with that scenario, say you decided you still had enough food and opted to rescue the survivor. You will need to venture out of the camp into one of the zombie infested zones listed on your map and fight horde after horde until you either complete your quest or decide to leave. In my personal play-through I was rescuing the wife of one of my party members.  I found her and she was a tough chick who thought her burly husband of a man was a softy. She’s been a great addition to my party ever since. 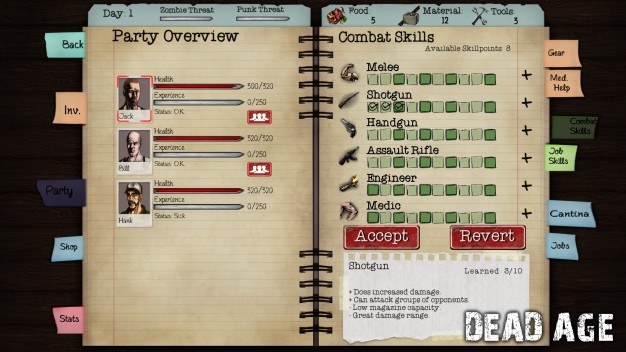 Your party members (if they manage to stay alive) grow stronger as you complete quests. When they level-up they gain skill points to put towards either Combat Skills or Job Skills.  This is when some classic RPG elements come into play. You really need to have each character spec into one specific area if you want them to be effective later in the game.

Combat skills increase a character’s proficiency with a weapon or medical expertise. The more points you put into say, shotgun, the stronger that character will be with a shotgun and will even gain new attacks to use in battle. The six Combat Skills are Melee, Shotgun, Handgun, Assault Rifle, Engineer and Medic. Each skill line has its own pros and cons and even ammunition. 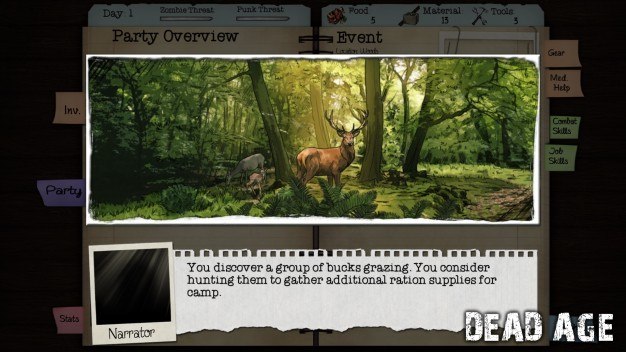 Job Skills, in my opinion, are probably more important than Combat Skills. Job Skills are what help keep your party alive and properly equipped. The four Job Skills are Survival, Crafts, Medical and Cunning. Putting points in to each will help your party succeed in the various random events that frequently appear, such as the hunting event seen above. Leveling up Job Skills also allows you to hunt, craft and guard more effectively, while also unlocking new crafting recipes.

The final elements of Dead Age I haven’t touched on yet are the rogue-like structure and combat system. The reason I waited til the end to discuss combat is due to it being the lamest part of the whole game. Battles are turn-based which I am OK with but they are still bland and REALLY repetitive. The reason for this being, if you want to conserve ammo (which should usually be the plan), your characters will just take turns melee attacking enemies. It gets old. Fast.  The combat graphics and sound track are unremarkable as well. 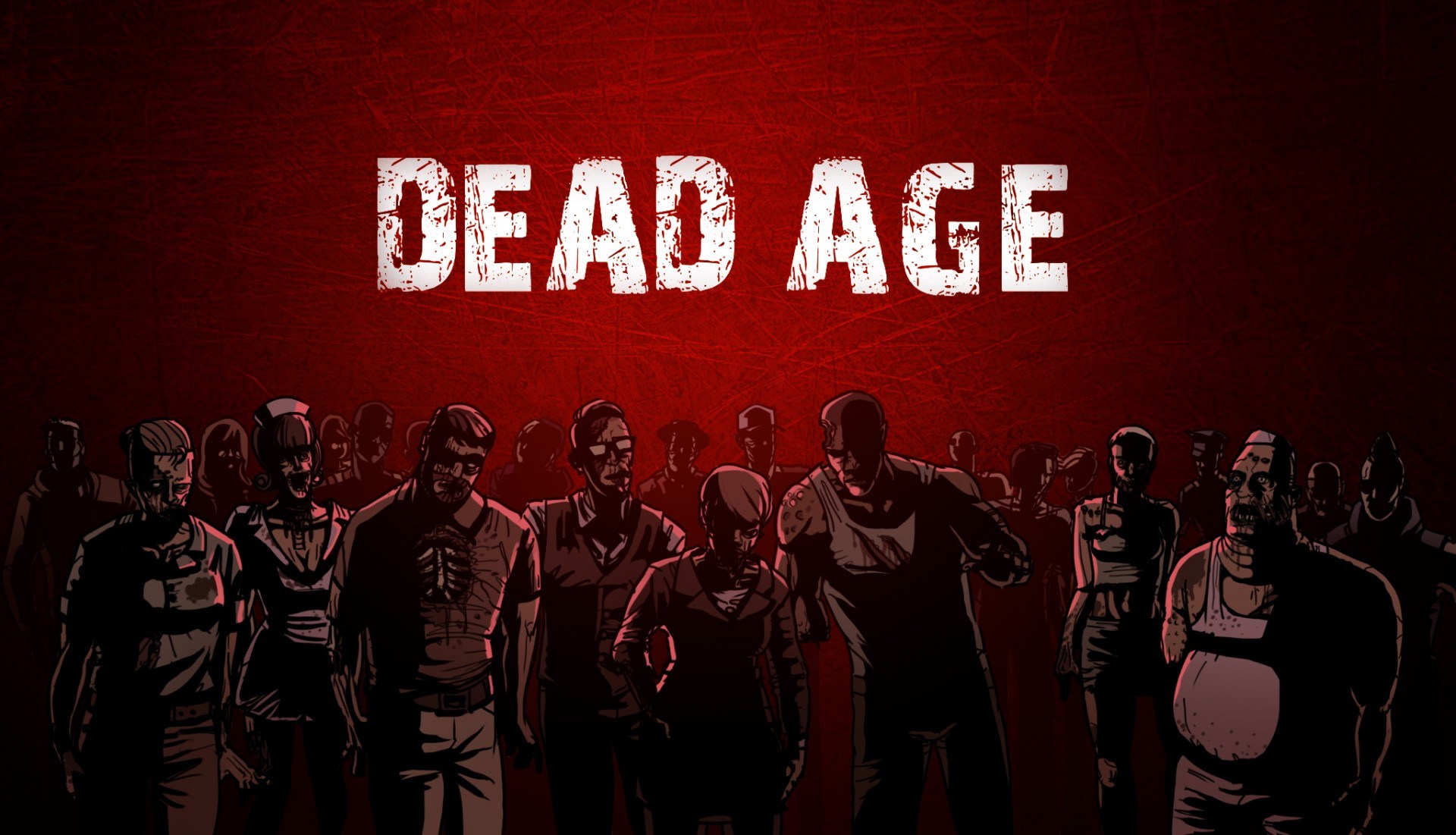 The rogue-like elements of Dead Age are surprisingly forgiving. Your new character actually gets bonus skill points based on how far your previous character got in the game. This is really nice as the higher your skill level in a certain line, the easier your life will be in game.

Speaking of new game, Dead Age is filled with random elements. The same things won’t happen to you in every game and each decision/action you make can affect the future of the game. That being said, there’s no telling which of Dead Age’s six endings you’ll get. Replay value for the win! This makes Dead Age well worth the $14.99 asking price for any survival game fan. But you better hurry before they run out of supplies!