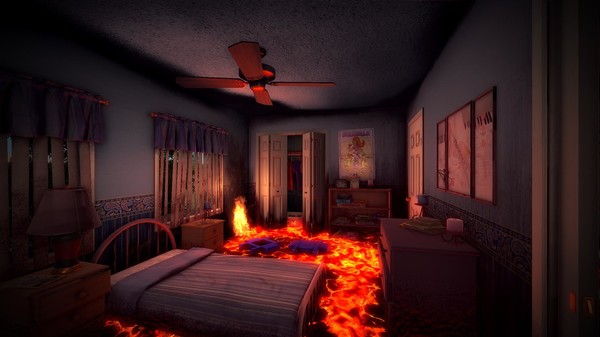 Based on the children’s game of the same name, also known as “The Floor Is Lava”, this game is Klei’s first 3D game. Following the trailer and the few previews of gameplay on YouTube (via Funhaus and Polygon), many have favorably compared Hot Lava to Mirror’s Edge. Both use similar mechanics to guide the player through a parkour style obstacle course, highlighting the elements of the environment that a player might not otherwise notice or pointing the way to the next checkpoint.

The tones are very different- while Mirror’s Edge takes its story and gameplay very seriously, Hot Lava brings to life the imaginative gameplay of so many childhoods by combining familiar settings- the living room and school hallways, for instance- and combining them with teetering rope bridges, eerie caverns, and of course, molten lava. Several playable characters have also been revealed, potentially characters from the cartoon featured at the beginning of the trailer, called G.A.T: Global Action Team (based on the rewards unlocked at the end of the level in the Polygon gameplay video).

While the original Hot Lava game is by no means a universal childhood experience, the previews offer a fun, original premise for a familiar style of gameplay and promise a bit of a deeper experience once the full game is available, with the little-explained cartoon intro and mention of “darkest fears” yet to be revealed.

Beta registration is still open at playhotlava.com and you can join the discussion on Klei Entertainments forums. Keep an eye out for the PC release date at the Hot Lava Steam page.