After around a week spent peering through a sniper scope at the bleak wastes of the Sinai Desert, I can finally rest my tired thumbs, safe in the knowledge that I have officially given Battlefield 1 a good run for its money. It makes sense to offer my opinion post-Beta, I think, so let’s not waste time: let’s jump in, and find out whether  EA DICE’s latest excursion into the world of warfare is set to sink or swim. 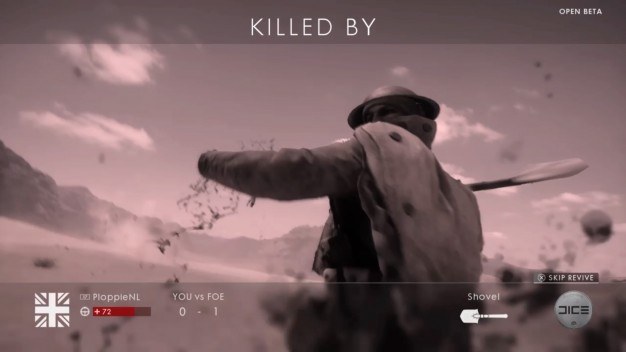 Death by shovel – for easy grave-digging.

Battlefield 4 bridged the gap between the impressive realism of Arma and the frantic pace of Call of Duty, operating within a gap in the market with an impressive efficiency. Battlefield 1 did much to build upon this in the short time that I had to play, offering the usual blend of gunfights and vehicular warfare; what was refreshing to see was that the former was more varied, as a result of weaponry that was so damn difficult to use that accuracy and reflex speed had less bearing on gunfight outcomes.

I managed to get through all four classes, and as many guns as humanly possible, and I have to say, I was rarely disappointed: the classic, single-action rifles allowed for a satisfyingly fast fire rate, making them fair competition for the strong, trigger happy automatic rifles. The surprising range of each gun class – particularly the light machine guns, whose fire could cause fighter planes difficulties – forced me to steer clear of shotguns for the most part, but that was no great loss: where Battlefield 1 truly excelled was in its sniping gameplay, and I found that a slightly decreased power and range was offset by an ease of access over that allowed for both long-and-medium range combat through a sniper scope. 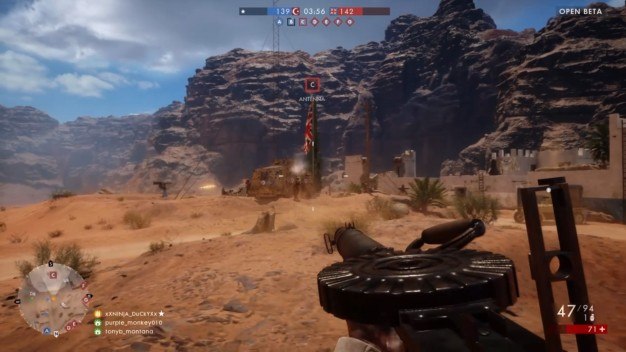 Never did work out why those tanks looked like cardboard boxes.

Having only recently started to play Battlefield regularly, I still suffer from an inability to control aerial vehicles, and so was set to ignore the dog-fights that were taking place above my head. However. The fact that the planes are that much slower than the jets from Battlefield 4 means that even if you are truly awful, you’ll still be able to land a few hits on the sluggish bombers; by the time the beta had ended,  I’d actually began to understand the controls a little better, and even get the occasional kill.

Just as dogfights are hugely entertaining, so too are the various other modes of transport. The Mark V Landship was my personal favorite for sheer brutality, flattening buildings and people without differentiation; the smaller tanks and the jeep were largely purpose-driven, useful for traversing the map quickly (as per). The horses, moreover, performed as potentially the most devastating vehicle on the game, being as they were fast and maneuverable but also able to kill a soldier with one hoof. 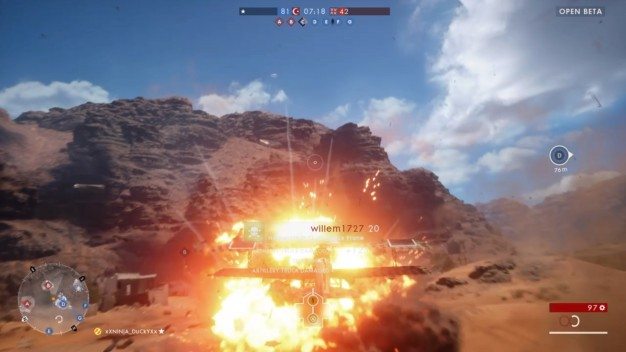 I know that counter-knifing was something of a controversial mechanic in Battlefield 4, but I felt nonetheless that it proved to be a useful tool for balancing the strong melee attack. It was, therefore, a little sad to see that for all the great weapon choice on offer, Battlefield 1 did not seem to have that same mechanic. Being able to avoid a bayonet charge, provided it took a bit of skill to accomplish, would have been a worthwhile addition (in my opinion). 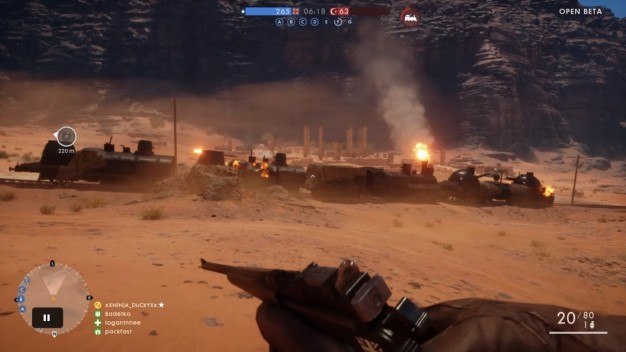 It’s not quite a Zeppelin, but it’s still pretty cool.

What managed to wind me up a little more than a lack of counter-knifing was the decision to allow pilots of any form of vehicle to repair themselves from within. This translated as vehicles that took far longer to wear down, particularly considering the historical lack of anti-vehicle weaponry that was a little too faithfully reproduced in-game. Obviously, there are drawbacks to repairing – you must be stationary on land, and you lose control of your vehicle in the air – but it still managed to occasionally allow skilled gamers to remain in their vehicles for extortionate amounts of time, with far less risk involved without being forced make repairs from the outside.

I’m also not entirely sure that horses should have been so extraordinarily powerful. I know being hit by a horse in reality would often be fatal, but I feel like at the very least the rider ought to be thrown off; By comparison, I often found that as the building beneath me disintegrated as an attack plane tore through it, exploded, and continued to spin on its propeller, I would simply drop to the floor, sustain a bit of damage, and keep fighting. So maybe nerf the horse, DICE? 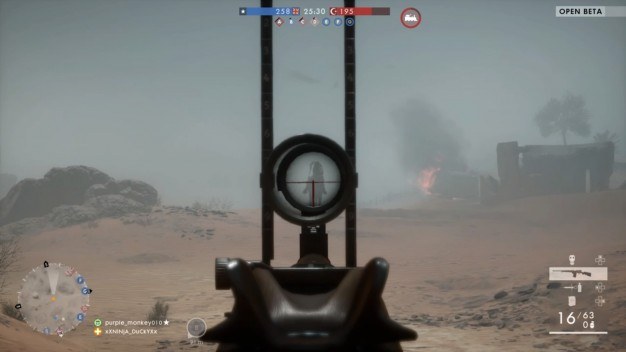 What nightmare is this? Oh, that’s right: it’s a horse.

It’s sad, really, because I love the game mode on Battlefield4. But after playing about 5 matches and finding that you will invariably win as an attacker (and lose as a defender) simply because your tanks are fully capable of taking or destroying objectives on their own, I decided that there was no fun involved any more; it was just dull repetition, as the defending team runs toward their telegraph pole, is blown up by tank shell, and then does it all again. I’m very interested to find out if anyone had the same experience, because me and my friends were met with it almost every time we tried to play. On the plus side, though, Conquest was great fun, particularly because of the relative proximity of most of the objectives. But it got very tiring, sadly, when there was nothing else worth playing. 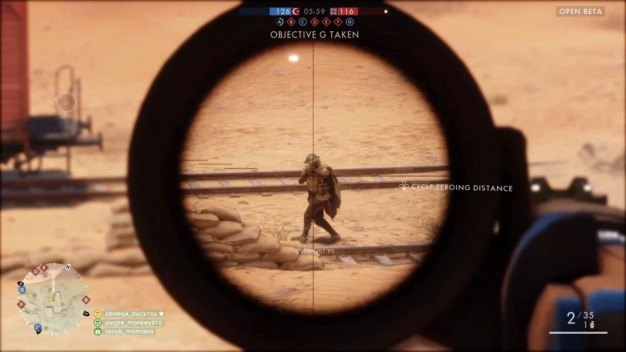 He actually killed me, bizarrely enough.

I was not disappointed by most of what I saw of Battlefield 1: it looked stunning, as I suppose it ought, and the gameplay was arguably more frantic than its predecessor, owing much to the shorter distances of the Sinai Desert and the increased emphasis on charging at people with pointy objects. The environment and design seemed as authentic as a videogame could be, right down to the appallingly clichéd cries of despair from the Brits (although I was surprised to hear the phrase Tally Ho uttered not once). What remains is to see exactly how much more of this potentially great game EA are willing to offer us; whilst I enjoyed my time in-game, I am just a little concerned that what I have seen accounts for a large portion of the finished product.

Otherwise, bring on the Great War.

Battlefield 1 is coming to PC and console on the 21st October, and will be available 3 days prior if the Early Enlister edition is purchased. Prices start at USD $59.99 (GBP £49.99), although there are so many variations that I don’t suggest that you quote me on that.