The prequel to the long standing Yakuza series is shaping up to tell us all the story of the two bad dudes that started it all, Kazuma Kiryu and Goro Majima. The latest trailer released by Sega pushes all of its focus onto the new developments in the series’ combat systems; and let me tell you, Kiryu and Majima are here for one thing and one thing only: to kick bubblegum and chew as… Wait. I think I got that mixed up. Either way, the bubblegum is gone and they are punching dudes in the face.

The concept of multiple fighting styles isn’t exactly a new one in the Yakuza series. However, in past games it was handled by giving each character a distinct style. For example, in Yakuza 5 you had a slow powerhouse fighter, an agile quick striker, and so on. In Yakuza 0 there are only two characters to use, but you can switch between 3 fighting styles each to keep the gameplay fresh.

Kazuma Kiryu, the series protagonist has the standard split in fighting style; a balanced stance called Brawler, a faster one called Rush, and a strong set called Beast. This is pretty standard fair in the series, even the parts where Kiryu beats down gangsters with bicycles and traffic cones. It’s at a point where this stuff is crazy fun, but if you stuck with the series to this point youre not quite as shocked when someone hoists a motorcycle over their head and beats someone to a pulp with it. 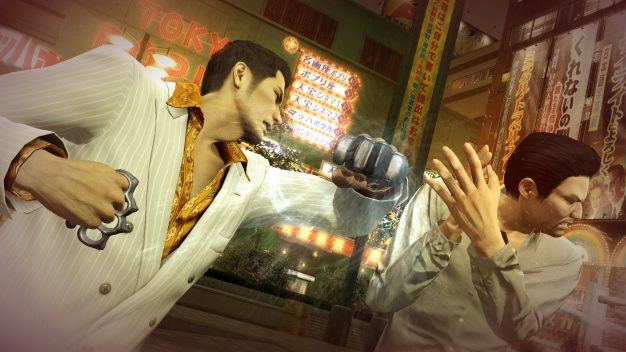 Where the combat really gets interesting is with Majima’s moves. In the past games, Majima has always been a boss fight and never really a playable character. In Yakuza 0 it appears that they are using elements of his boss fights in previous games and using them as his fighting styles. In his first stance, Thug, he focuses more on throws, takedowns, and counters; much like in his boss fights against Kiryu in the past. In his second style, Slugger, he focus on baseball bat attacks, like in his sections of Yakuza 5. Then things really get out of hand with his final style, Breaker, that can best be described as the breakdance fighting scene from Zoolander.

Another cool addition to the series is the way you can skip street fights. When you see a group of enemies rushing you, you can just make it rain on them and keep on walking. However, if you flash too much cash, a large boss enemy appropriately called “Mr. Shakedown” will appear and beat the cash right out of you. While, I am a huge fan of the series and the combat in the games, the cities of Yakuza have always had a tendency to be packed with more random encounters than an open field in Final Fantasy and it’s nice to see a simple solution to that while still giving you incentive to fight the encounters.