Through the Woods is a psychological horror game, the first from indie studio Antagonist, based in Oslo, Norway. The story follows a young, single mother who’s lost her son, Epsen. What elevates it from stressful to scary is that the search plays out in a seemingly haunted forest, a setting heavily influenced by Norse mythology and Norwegian folk tales. 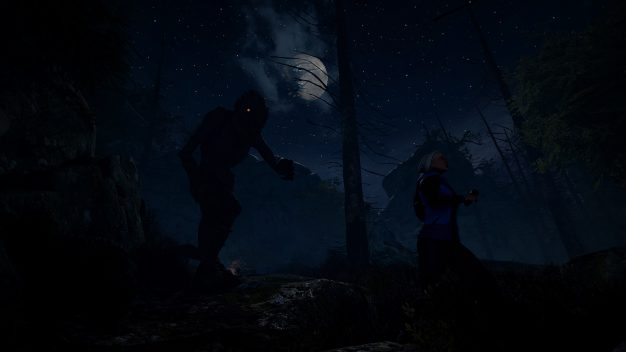 We first meet the mother and son as they are taking a walk in the woods around their lakeside cabin, and the mother warns Espen not to play down by the old pier. Although the brief quasi-tutorial is played as Espen, we quickly switch to playing as the mother, whose narration is interspersed throughout the game. Espen and his mother are not seeing eye-to-eye; he wants to play and explore and she needs to complete a project for work, having stayed up so late to finish it that she is now sleeping through most of the day. This is how a mysterious stranger has the opportunity to lure Espen into his boat and take him away across the lake. Playing as the mother, you witness this abduction and dive into the (presumably freezing) water and swim after them, determined to save Espen and bring him home.

As the main storyline takes off, the mother finds herself on an island that, during the day, seems to be home to the same mild forest that surrounded the lake cabin as well as an old, abandoned village where, in old papers and diaries, you can read about Ragnarok, trolls, witches, and a sinister figure called Old Erik who stole away the villagers’ children. Once the sun goes down, these things all become disturbingly real; the once abandoned village seems to be full of voices behind closed doors and dead bodies collapsed on beds and chairs. 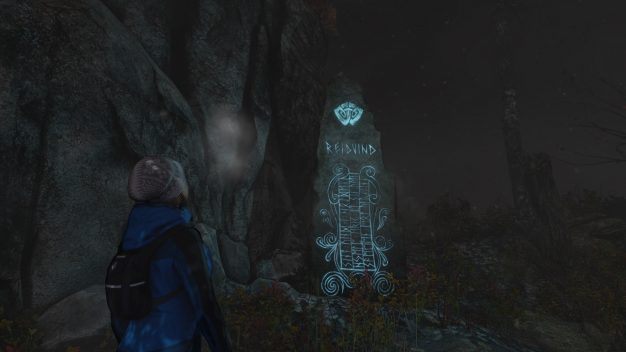 The world of Through the Woods is carefully revealed to the player bit by bit. Although it uses elements of Norse mythology, it doesn’t make the mistake of piling too much information on the player and overwhelming them with irrelevant minutiae, or holding back so much that parts of the game don’t make sense without that stubborn completionist streak some players are blessed with. Much like the mother, we have an objective that has little to do with the supernatural elements of the world, but are forced to make sense of them in order to survive. The beasts and monsters encountered as you explore the island are not over-explained, but enough information is given that even those unfamiliar with their place in Norwegian folklore will be able to appreciate their role as part of the island’s magic.

The environment, too, is gorgeous; it is incredibly detailed down to the moss on the rocks, snow in the trees, and the aged paper that the notes about Erik and the history of the island is written on. Even the way the wind blows through the scrubland-like plants that line the paths looks so natural. It’s difficult to pay attention to the mother’s worried narration that she won’t find her son in time to save him when the scenery is so beautiful and distracting. 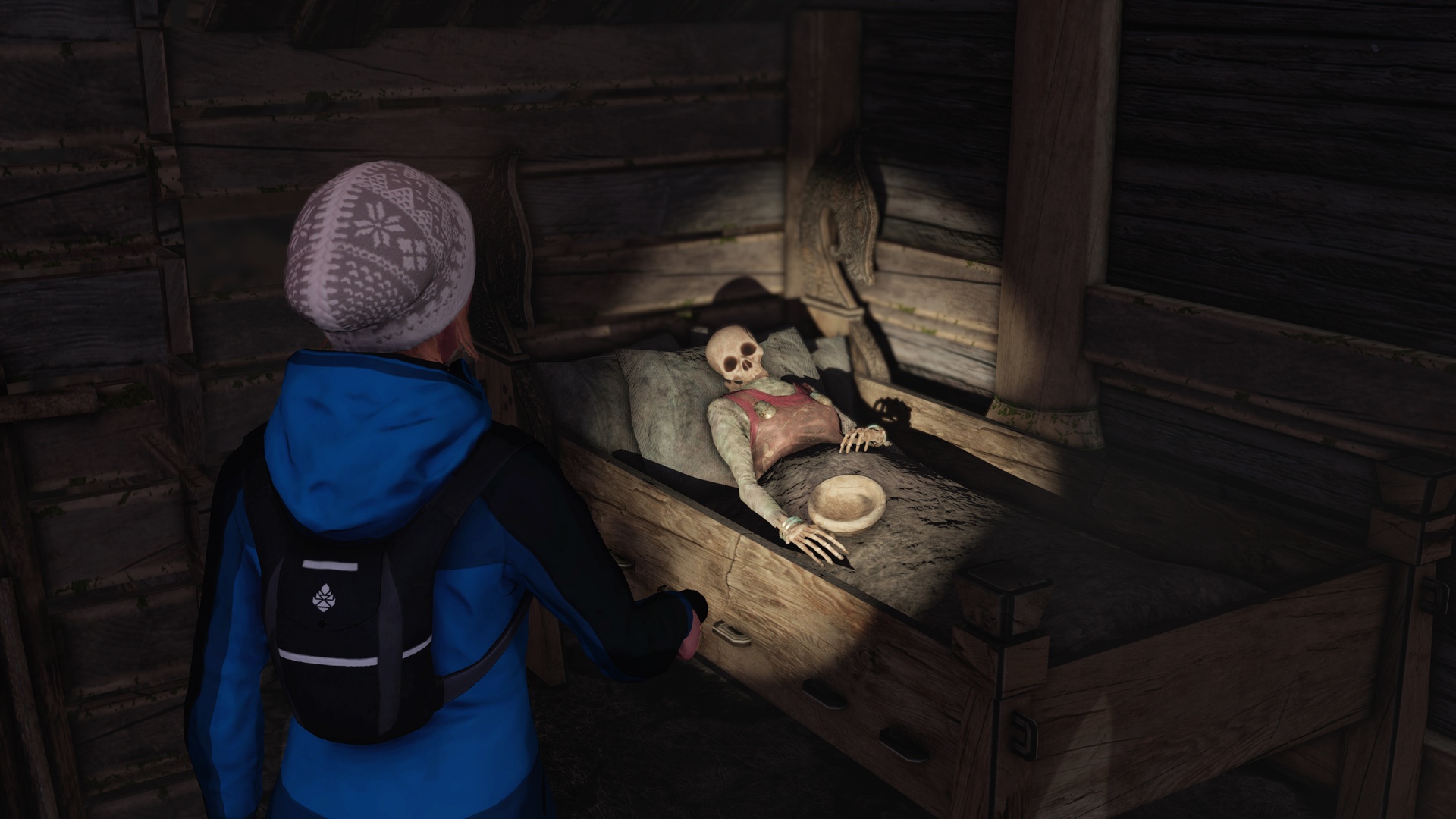 Just as the world is revealed piece by piece, so is the story of Espen and his mother’s relationship. Not as readily revealed is the fact that the mother’s narration is leaving out details until the next portion is told. This builds to an incredibly dramatic reveal that confronts the mother with the heinous choices she made that led to her husband’s death. Even at the beginning of the game, before Erik spirited Espen away, the mother admits that when Espen was born, she didn’t love his father, even resented him.

Unfortunately, the voice acting leaves something to be desired; the monsters, the villagers, even flashbacks that feature Espen’s father are all pretty standard, but the mother’s narration is often a bit flat. She doesn’t seem to have a wide range of emotion, managing sad and scared (when she dies), but when she talks about saving Espen or when she shouts insults at enemies … it falls flat. Calling the goddess of death a bitch isn’t as impactful when it has the same inflection as “Please pass the salt.” The strangest thing is that the studio seems to have used a different actress in the demo, who sounded a lot better suited to this type of narration and dialogue. 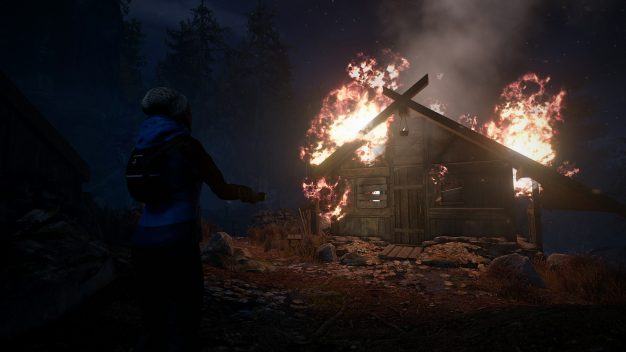 The cut scenes (thankfully there just aren’t that many) are also a bit of a detraction from the story since the animation of the human characters just isn’t on the same level as the rest of the game- the facial expressions distract from the drama of the moment just as much as the unemotional delivery of the lines. Connoisseurs of indie horror, especially psychological horror games, will recognize a lot of similarities to Funcom’s The Park, released last year: a mother looking for her lost son, a malevolent supernatural being attempting to keep them separated, a climactic moment near the end of the game revealing ugly truths about the mother’s past, and a lot of reading scraps of paper to tell the story. Through the Woods definitely has a little more dimension to it, allowing the player to see different areas in different ways and incorporating more survival horror elements when escaping monsters.

Through the Woods also uses a third-person over-the-shoulder camera as opposed to The Park’s first person POV. This can become problematic, especially playing on PC because certain scenes or pieces of dialogue are triggered based on the player’s proximity to characters or locations. The player can miss these almost entirely because the game almost never redirects the camera to focus on important events or crucial objects or characters. While this does add an extra layer of player control (Don’t care about this giant monster that’s trying to talk to you? Ignore it and keep going I guess!) it can also be really frustrating to have the character you control referencing or screaming about something as you frantically try to redirect the camera before the thing is gone. 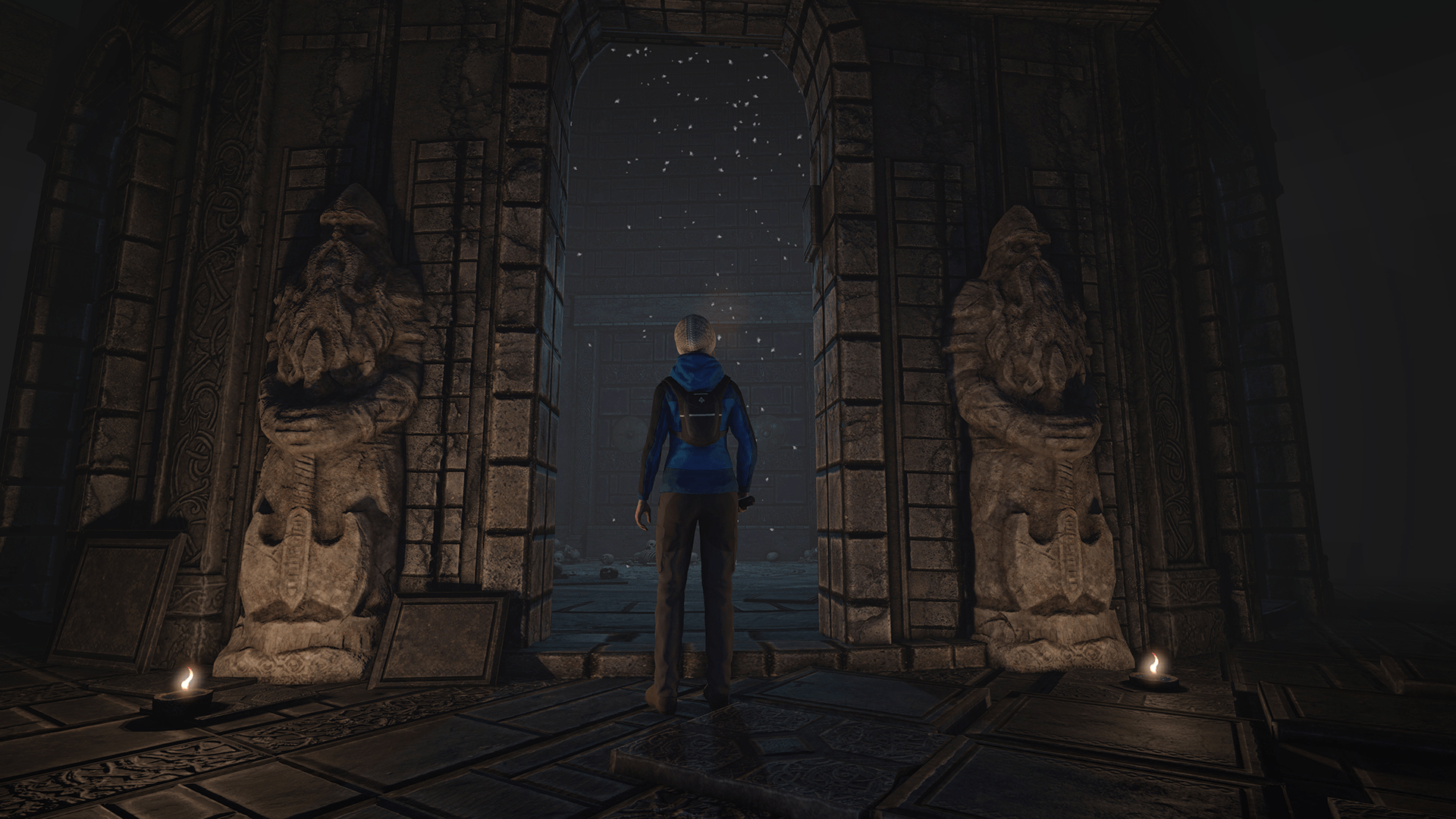 The most important question for a psychological horror game: Is it scary? The answer: Kind of? The game doesn’t rely too much on jump scares, although there is enough movement “in the corner of your eye”, so to speak, that it keeps the player on edge. The environment is vaguely unsettling, but doesn’t amp up the creep factor by a large amount. The narrative is engaging but doesn’t really add to the horror, mostly because it’s hard to empathize with a heroine who seems so emotionally disengaged.

There’s not a high level of difficulty here, so fans of survival horror games may not be satisfied by the monster interactions. Nor is the scare level incredibly high, which may be disappointing to people looking for an adrenaline high. However, the story and environment make Through the Woods a fairly satisfying experience, especially if you’re just a big ol’ mythology nerd. The game is available on Steam, and you can check out the trailer and other info from Antagonist on their website.

Not-So-Much Mother of the Year

Through the Woods looks gorgeous and will intrigue players as it reveals its supernatural world of Norse mythology, but may disappoint scare-seekers.