Booting up The Dwarves for the first time, I had no idea what to expect. I still didn’t really know what to expect after half an hour of gameplay, but once I got into the nitty gritty, the tactical RPG generally managed to overcome its flaws. For an experience that opens on a massive battle of dwarves vs orcs featuring explosive and dynamic combinations of special moves and a strong focus on tactical play, the main campaign is incredibly story focused. In a Dungeons and Dragons twist, your journey across this gorgeous world will be informed by whatever move you want to play. Sure, it’s a restricted, console version of a Dungeons and Dragons framework, but it still feels damn good to maneuver. 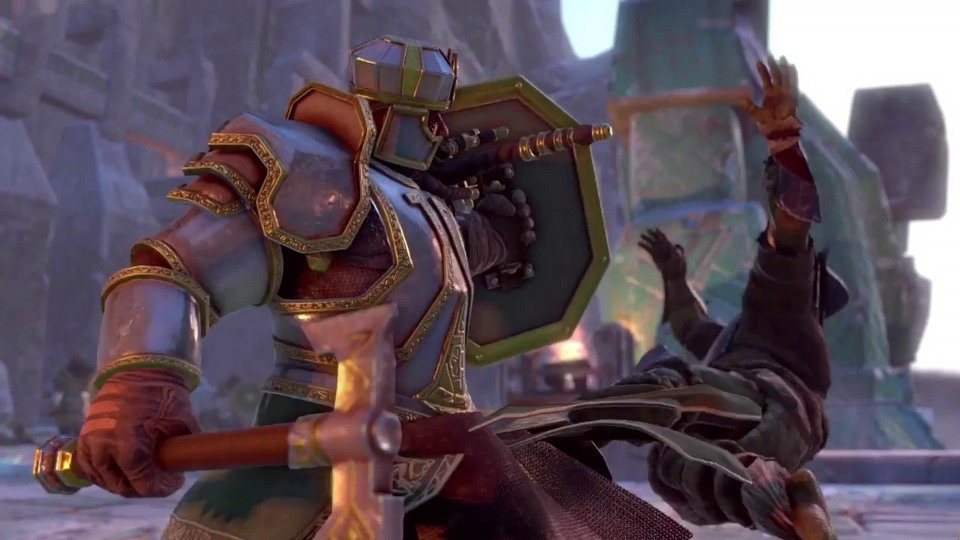 Playing as a down and out dwarf named Tungdil, you take your baby steps into the great unknown with the task of returning some items to an old student of your professor and the aspiration of becoming a traveling warrior. I’m sure you know by now, it’s the latter goal that will be accomplished throughout your journey. Your initial impressions of Tungdil and the world you inhabit is… disappointing.

A sticky overhead point of view makes your initial petty errands around the school of magic in which you make your living in the forge feel incredibly tedious. It’s unfortunate that a world and story so elaborate and intricate as this would begin its main campaign with a dark, dingy top down corridor and a set of boring tasks. This is perhaps made worse by the sheer magnitude of the opening battle you have just completed. 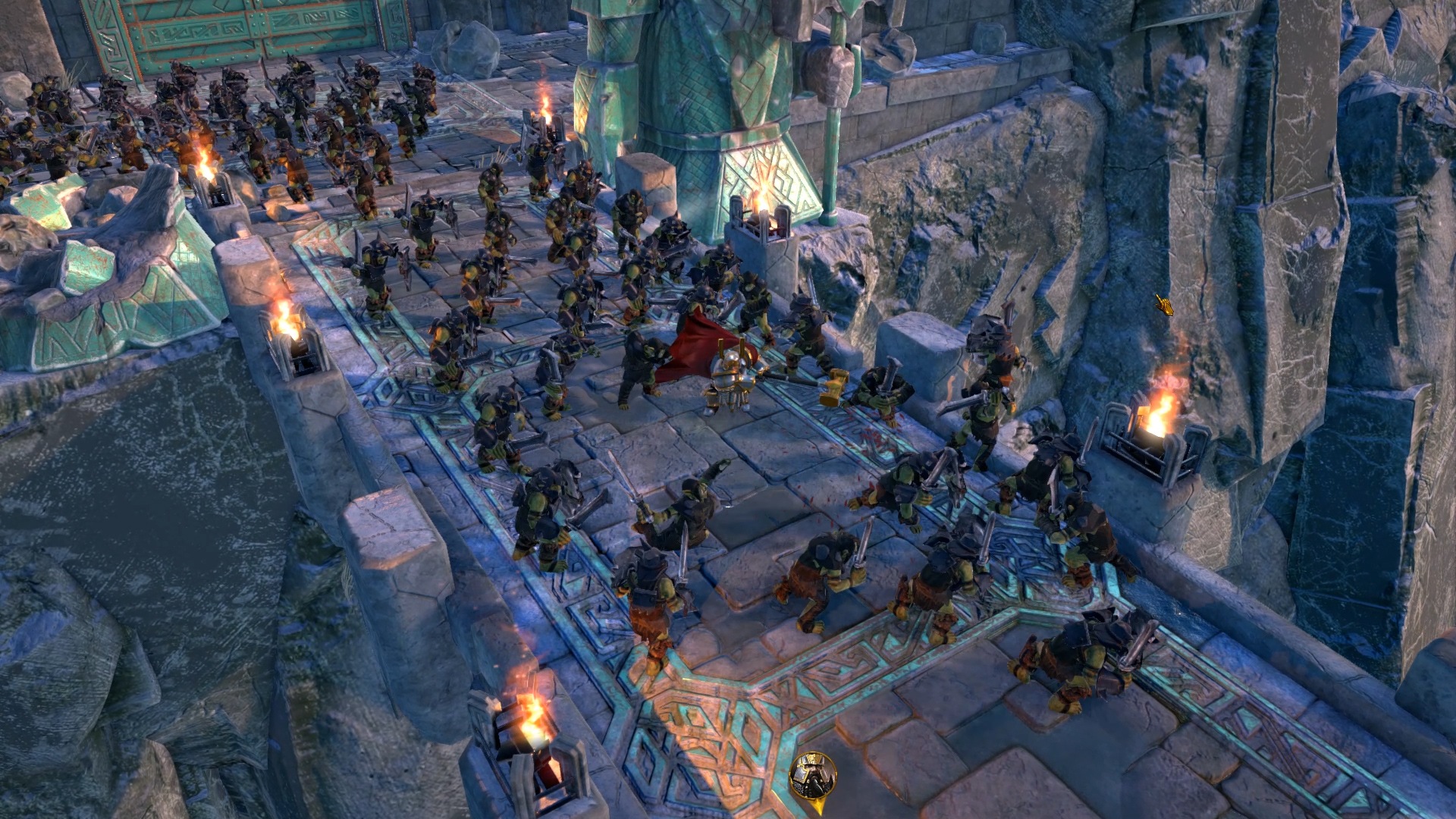 The combat system on The Dwarves is deceivingly easy – some more pointers on how battles work in this initial tutorial would have led to a lot less button mashing and confused wiki searches on my end. Nevertheless, once I worked out that I was only in charge of special moves and actually moving around the battle, combat proved to be smooth and responsive, worthy of the blockbuster opening it inhabited. I was blown away by the graphical quality in this opening crusade. Snow seemed to glisten and textures were dazzling in the sunlight, and though camera movements were sometimes slightly lagging this proved no disadvantage to actual orc slaughter.

Completing this vivid and compelling opening battle and proceeding to plod around a dimly lit cave for half an hour somewhat bursts the bubble. Where on the outside interaction is tactile and meaningful, inside you can spend two minutes listening to some inner dialogue about the way an axe looks. Where visual splendor is abundant and crystal clear outside, indoor textures are blocky, crude, and at times even comically basic. It’s obvious from the start that The Dwarves works much better on a macro scale than micro. 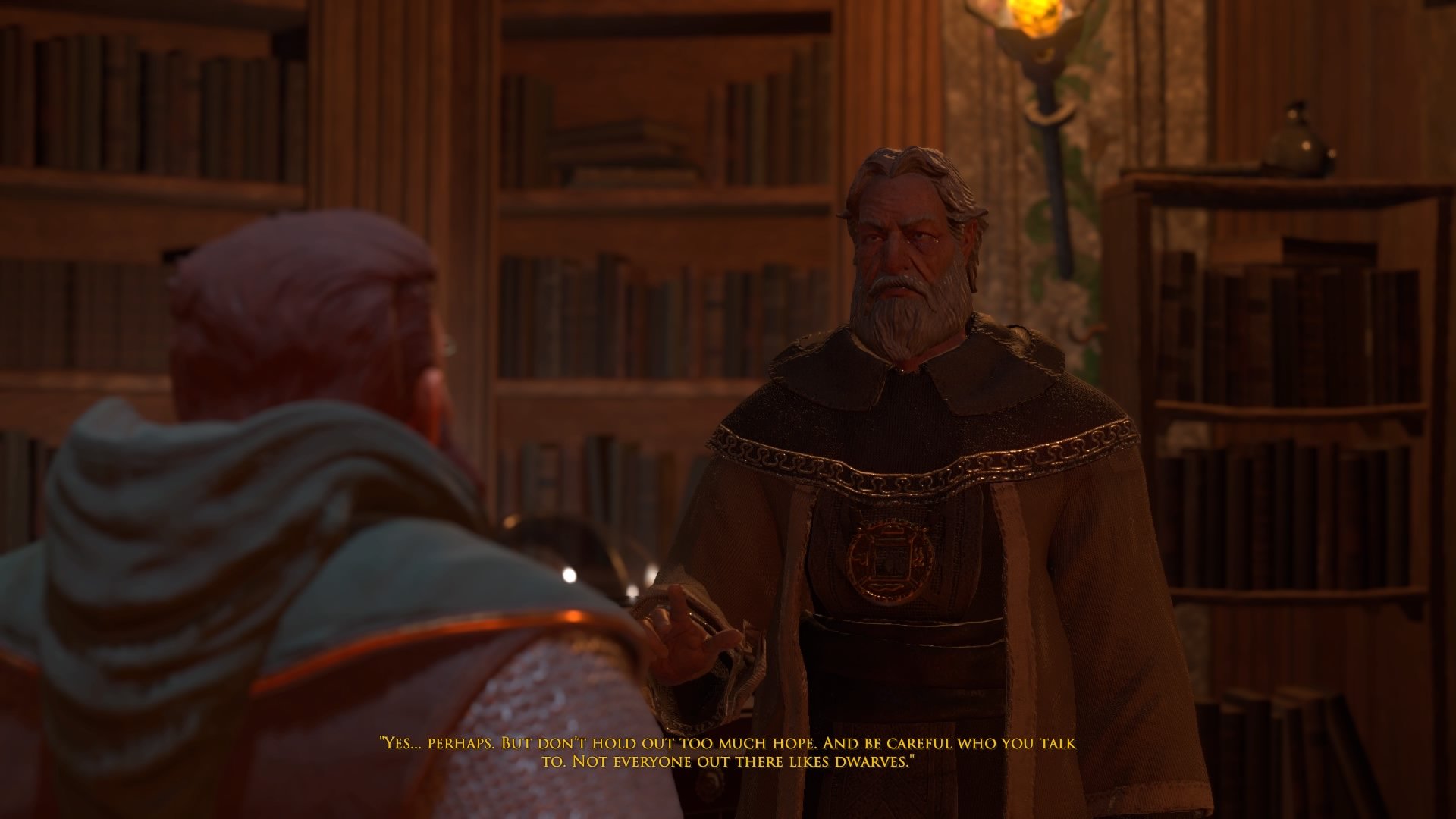 Nevertheless, we soldier on to greener pastures in the form of an innovative and effective map screen. In almost watercolor effect, your destination appears as well as certain waypoints, points of interest, natural landscapes, and settlements. Your route through this map is up to you, and whichever path you take will present its own decisions and situations allowing you to take the time and define just what kind of dwarf you want to be, all the while learning what kind of dwarf the world thinks you are.

Being accompanied by a second person narrator who delicately describes your every move and thought can become unsettling in a game that seems to allow you to define your own path, but it helps the Dungeons and Dragons aesthetic along nicely. Some voice acting falls flat on occasion, and the long atmospheric descriptions of your nameless narrator can become tiresome, however the storyline unfolds at a comfortable pace. 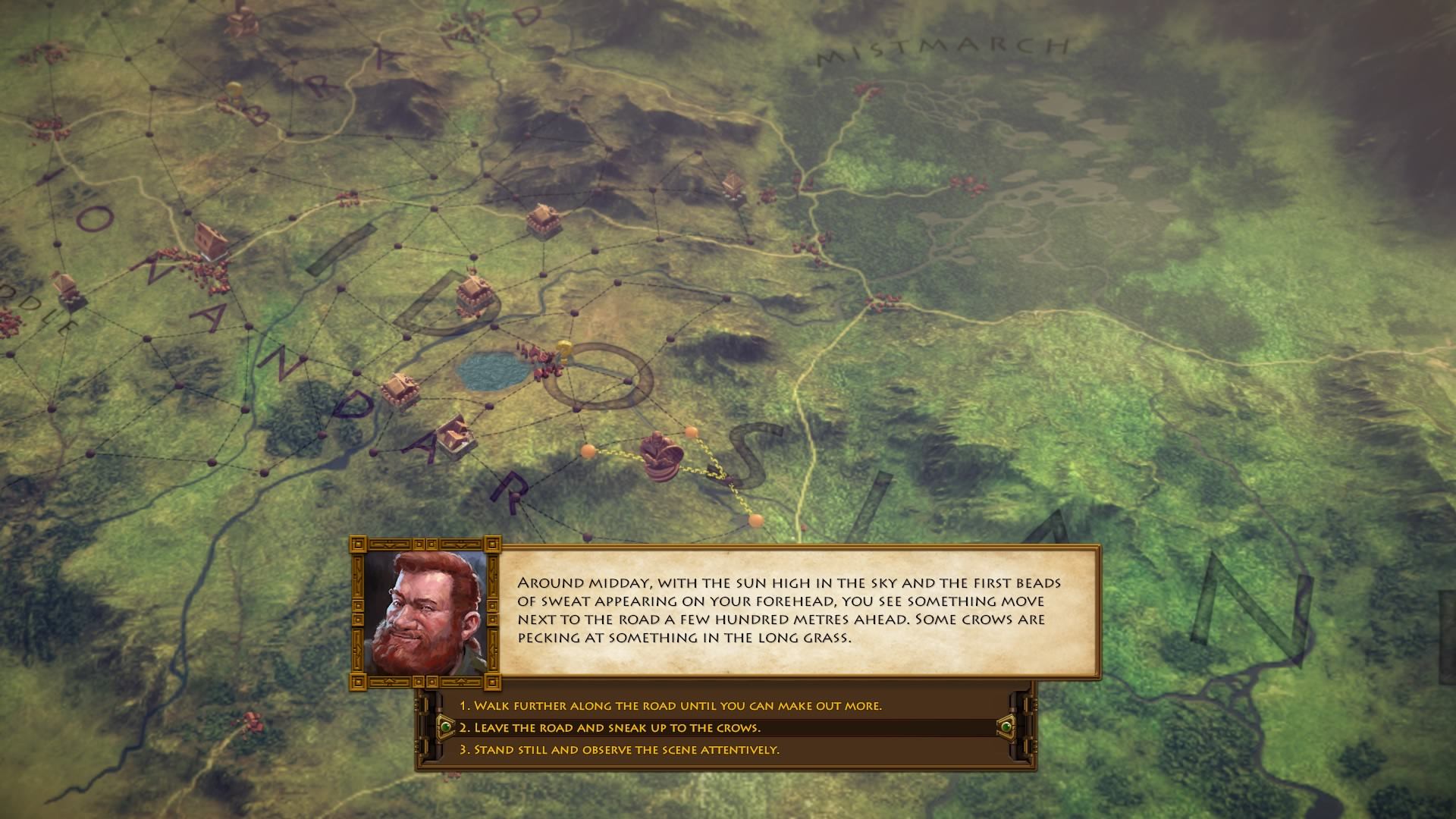 The developers seem to have found a sweet spot between letting you process the narrative at your own pace and keeping that pace up to suit the demands of the experience, and it works wonders in an environment that feeds off your imagination as much as this. Because so much emphasis is on what you fill in yourself, the narrative style can allow an incredibly rich plot without having to labor through lengthy cut scenes or pages of lore. After the initial battle, your exposure to combat wanes. So when things go full throttle and the axes come out, it’s an energetic switch from story collecting and exploration.

You control each member of your party who can take care of themselves in battle and await your command for special moves. These moves vary in effectiveness, and the amounts of energy required, however they can often be specialized for certain types of enemy or situational factors which adds a welcome extra level of thought to the battle screen. To make room for all this strategizing, The Dwarves includes one of my favorite battle features – the ability to pause gameplay, assign movements, and watch it all unfold before you. With this system in place combat never feels frenzied, sure if you’re running out of health and you have a whole new horde of orcs to contend with on no energy your heart rate might creep, but there’s space to think and assign tactics which makes this a fresh yet lively experience not to be missed.

The clear and fair level up system allows for steady character progress and development without becoming convoluted and redundant. Confusing skill mechanics are nowhere to be found. Instead, we have a nicely compartmentalized skill tree with distinct and coherent moves up for grabs.

So, we have graphics that are brilliant when they want to be and dire when they drop, a combat system that’s intuitive and fun to work with, and a storyline that’s deep but also consumable to avoid confusion – what’s the catch? Loading times. I thought we were beyond this, but the loading times in The Dwarves are considerably extensive. After a death in the heat of battle, you don’t want to be sitting and checking your phone to pass the time while the game pieces together another try for you. Sometimes even map moves or simple action decisions earned me a lengthy look at the loading symbol. 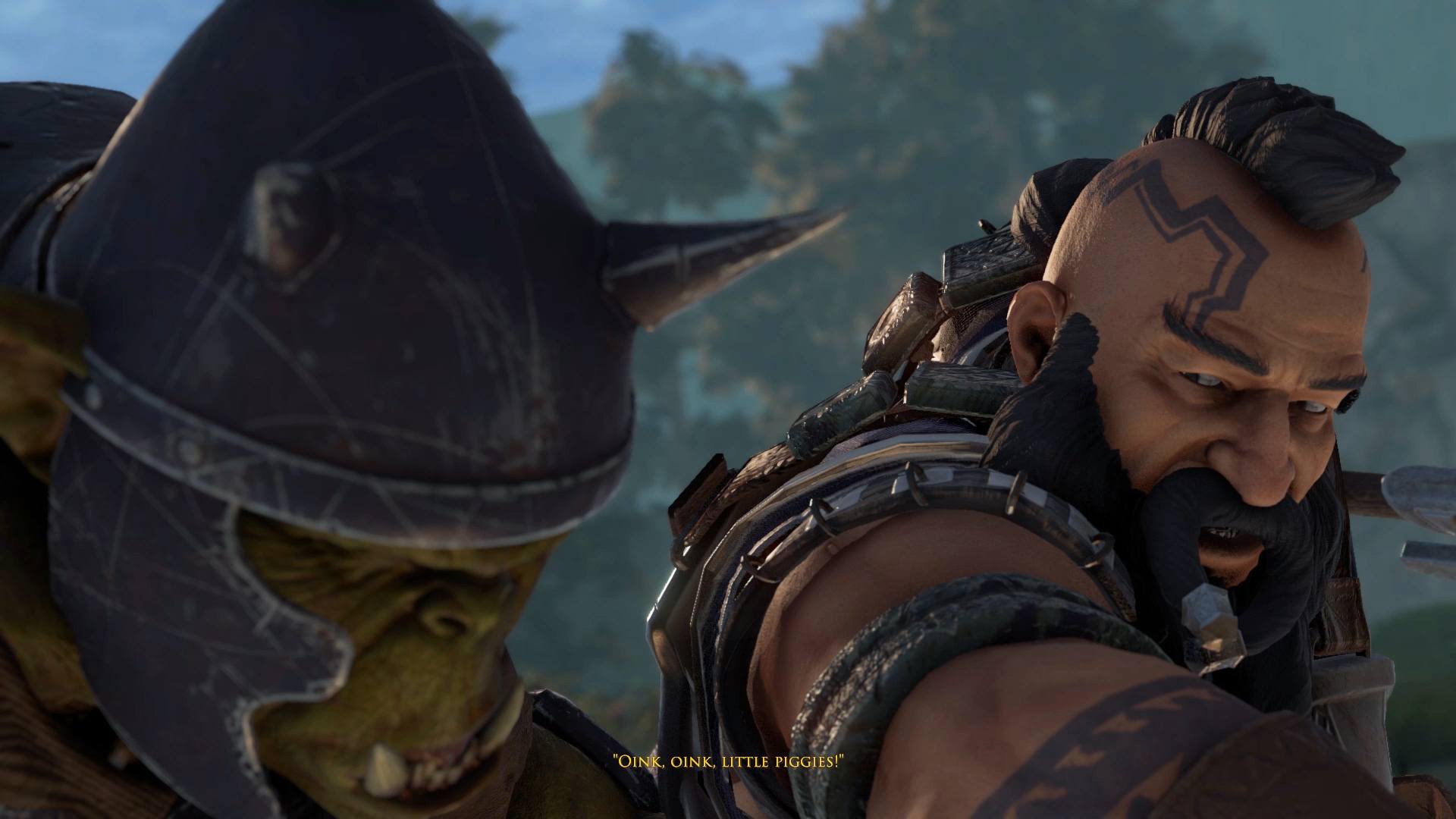 While certainly not game breaking, The Dwarves is too fluid an experience to have to become so disjointed and, at times, frustrating. Long loading times may be a small price to pay for what is, on the whole, an incredibly captivating experience. But when captivation is eclipsed by confused silence, it’s difficult to retain a sense of energy or intensity. The Dwarves is still a challenging and engaging RPG, especially if you like your skirmishes in “real time,” just be prepared to wait between battlefield engagements.

If you’re looking for a good story to get your imagination fired up and a good battle to flex those tactical muscles then look no further than The Dwarves. There’s even plenty of rest time between moves courtesy of your friendly neighborhood loading screen, and some graphical misfortunes for a chuckle among the otherwise magnificent landscapes.