Rick and Morty is a great show. Well, actually, Justin Roiland and Dan Harmon’s animated series is a super twisted show about an alcoholic, sociopathic science genius who drags his naive grandson on his crazy intergalactic and inter-dimensional adventures. But yeah, still great. And that greatness is, for the most part, reflected in J!NX’s Rick and Morty blind box mini figures. 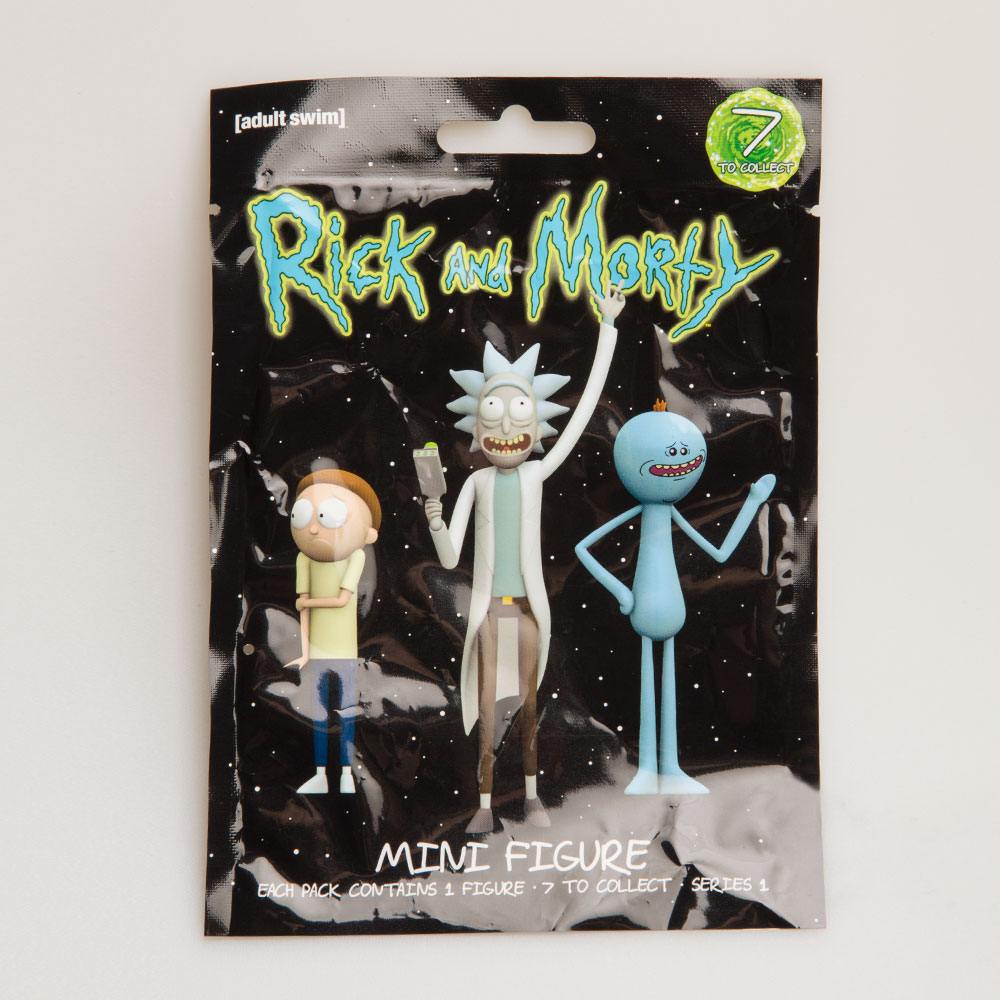 The gaming-influenced clothing brand has branched out into other geeky interests, which includes these mystery mini figs straight from Dimension 35C. Series 1 includes seven figures: Rick, Morty, Tiny Rick, Summer, Happy Meeseeks, Sad Meeseeks, and Rick’s Spaceship. They retail for $4.99 each, which I can tell you – as a connoisseur of all things tiny and vinyl – is cheaper than most blind box mini figs which typically retail between $7.99 and $9.99. But then again, these are also smaller than most blind box mini figs. The tallest, a portalgun-wielding Rick, measures just 7mm from the top of his translucent green base to tip of his outstretched hand. These truly put the mini in mini figs. But considering the level of detail, it’s still a solid size-to-price ratio. 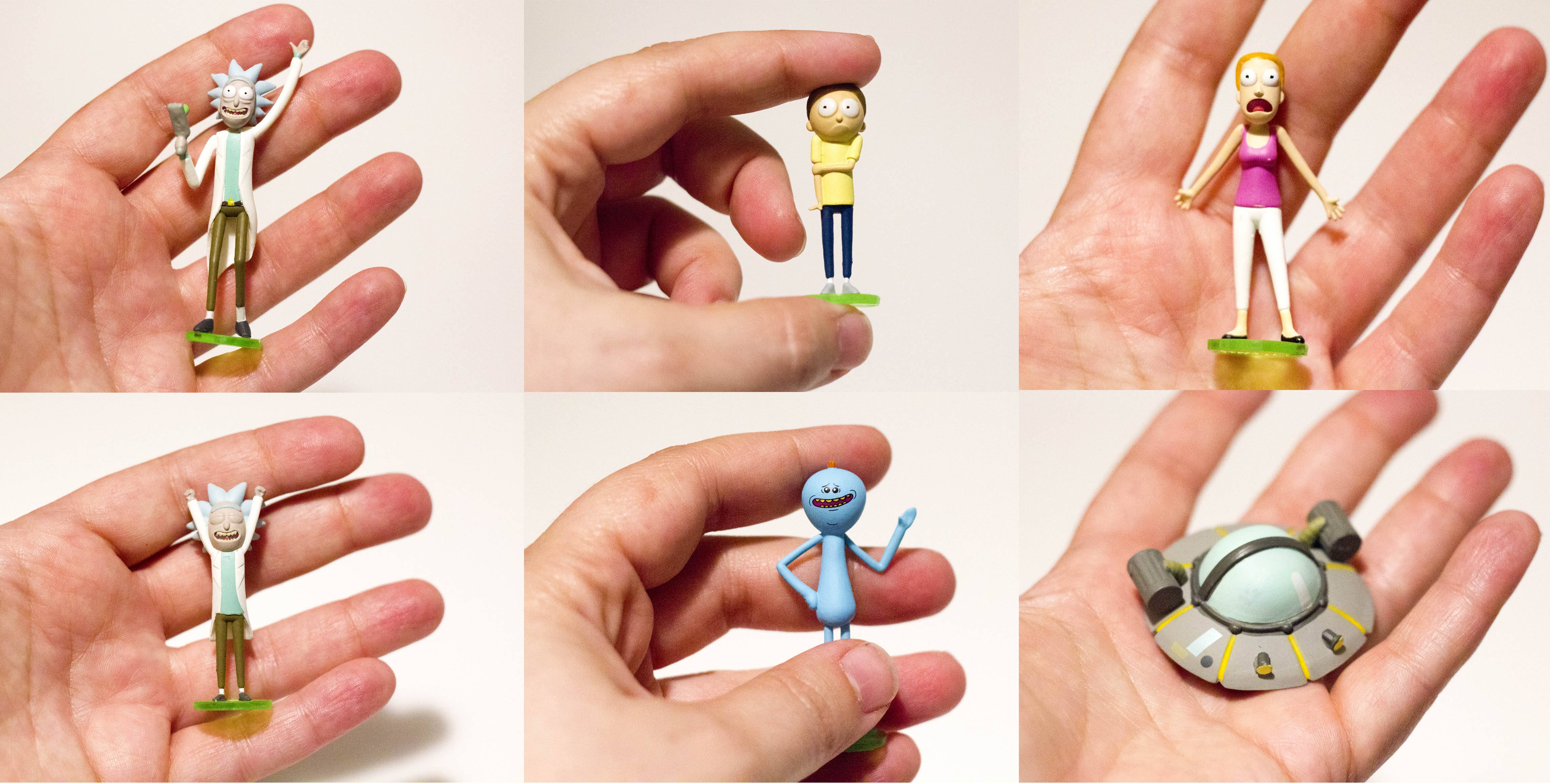 And speaking of ratios, J!NX does not provide any box odds. Your chances for getting a particular figure appears to be 1/7 across the board. My personal experience seemed to confirm this; only two out of nine were duplicates, leaving me just one Sad Meseeks short of the whole set. This is good news for those hoping to collect Series 1 in its entirety. Especially when you consider that for now, you’ll have to order directly from J!NX’s website; this means no obsessive-compulsive squeezing or weighing the packages, much to my sister’s relief. Though I personally felt no shame storming into Hot Topic with a food scale, Lauren felt intense shame by proxy. 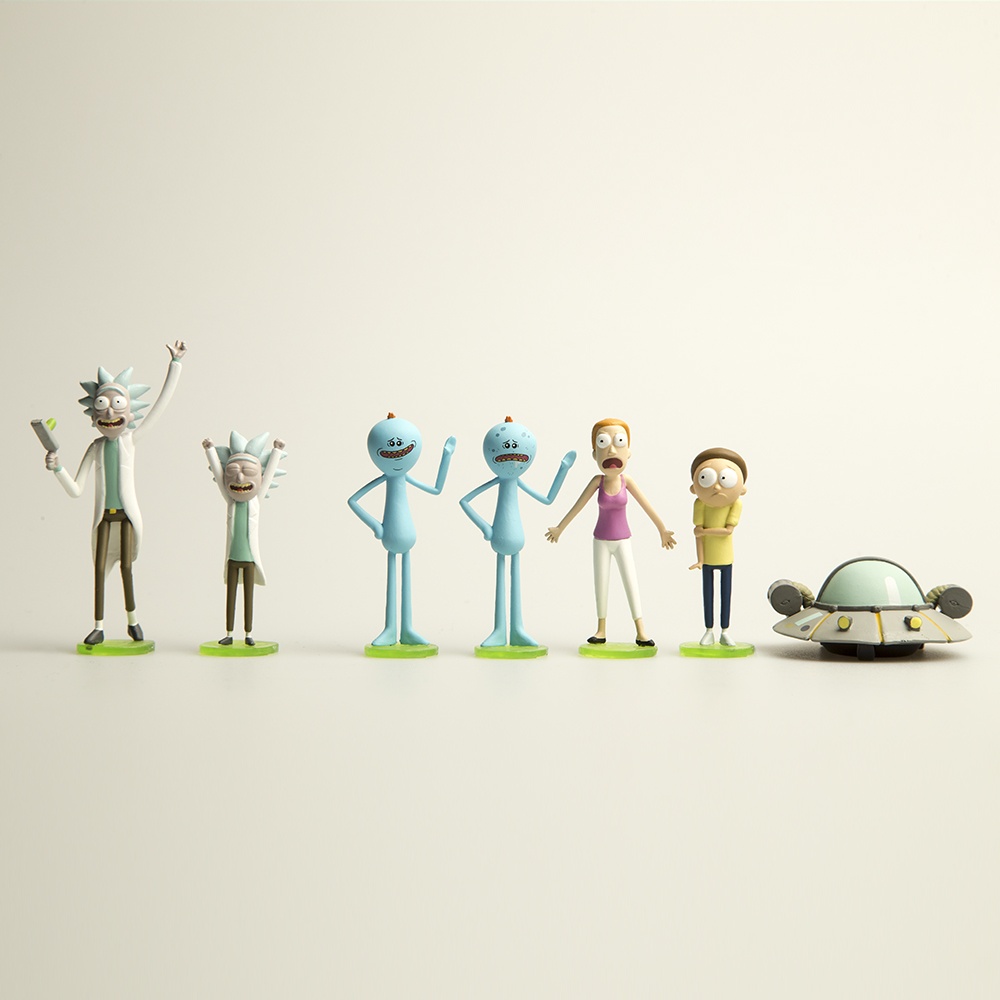 The entirety of Series 1, lined up in classic The Usual Suspects-style

The sculpt on the figures is terrific, especially considering their diminutive size and lanky shape. The character designs in Rick and Morty tend toward the spindly, and J!NX has managed to capture that without sacrificing smaller details, from Rick’s portalgun to his belt buckle to his bald patch. Other than the pair of Meseeks, who faces are appliques, all the expressions are sculpted. Equally impressive is the deco; how they managed such a clean paint job when other vinyl makers can’t manage draw inside the lines on figures 10x the size is to J!NX’s credit (and Funko’s eternal shame). 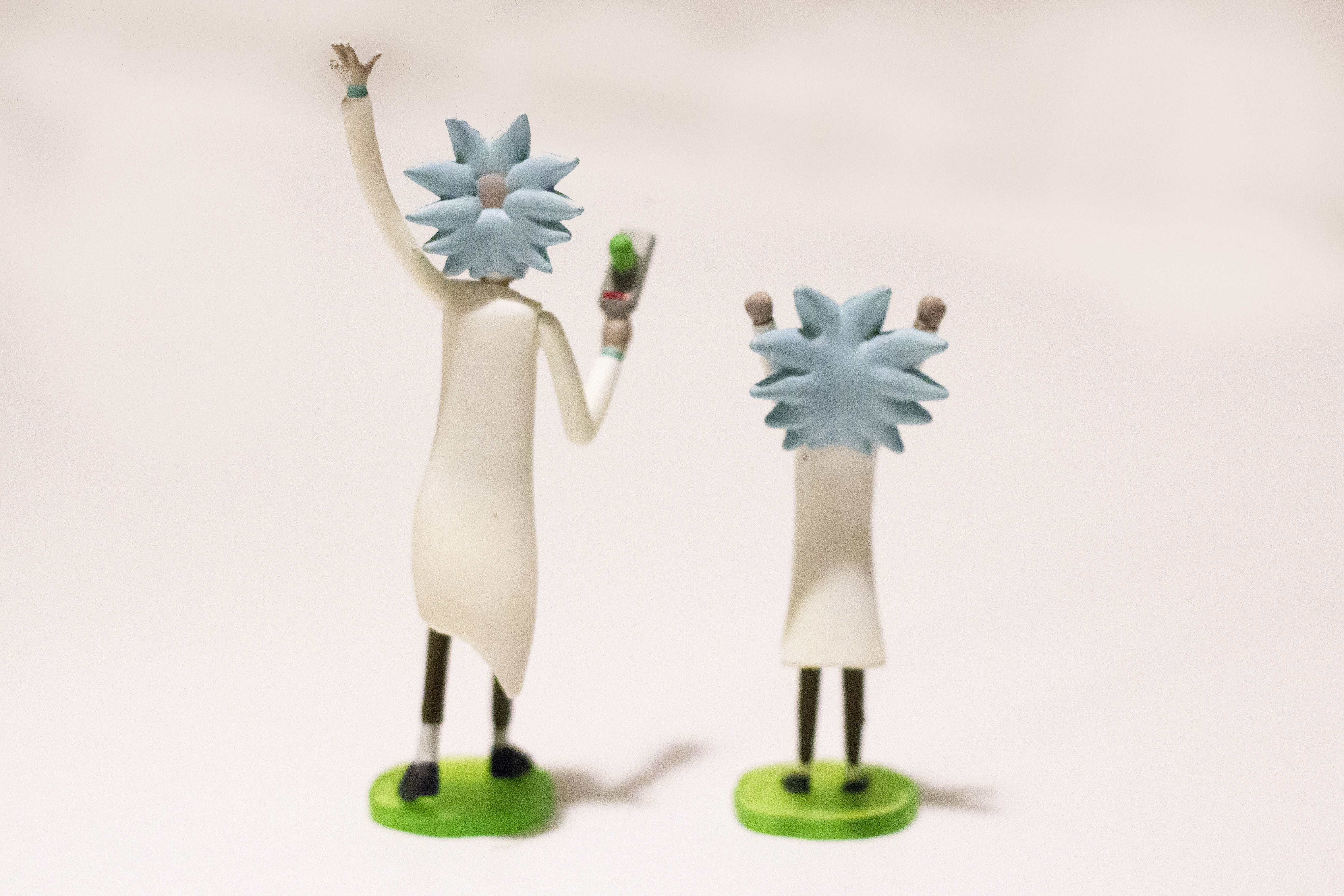 Though the overall sculpt and paint deco is impressive, the variety on offer is less so, especially considering the wealth of wacky characters who populate the Rick and Morty multiverse. Though I understand the need to check off the main players in this first run, they could have included at least one figure that was a little less obvious, a little more outré. A Squanchy, Birdperson, or Revolio “Gearhead” Clockberg, Jr. perchance? Personally, part of the fun of collecting these tiny lumps of plastic is the thrill of the chase for, well…the chase. For those not in the know, a chase figure is one that is produced in limited quantities relative to the rest of the figures in a series, making it the one a completionist must “chase” after in order to complete their collection. This first series doesn’t have a chase figure, which is a real shame. Then again, maybe it’s a blessing in disguise, as there’s no telling how much money I would have thrown at J!NX had they included a Scary Terry chase. 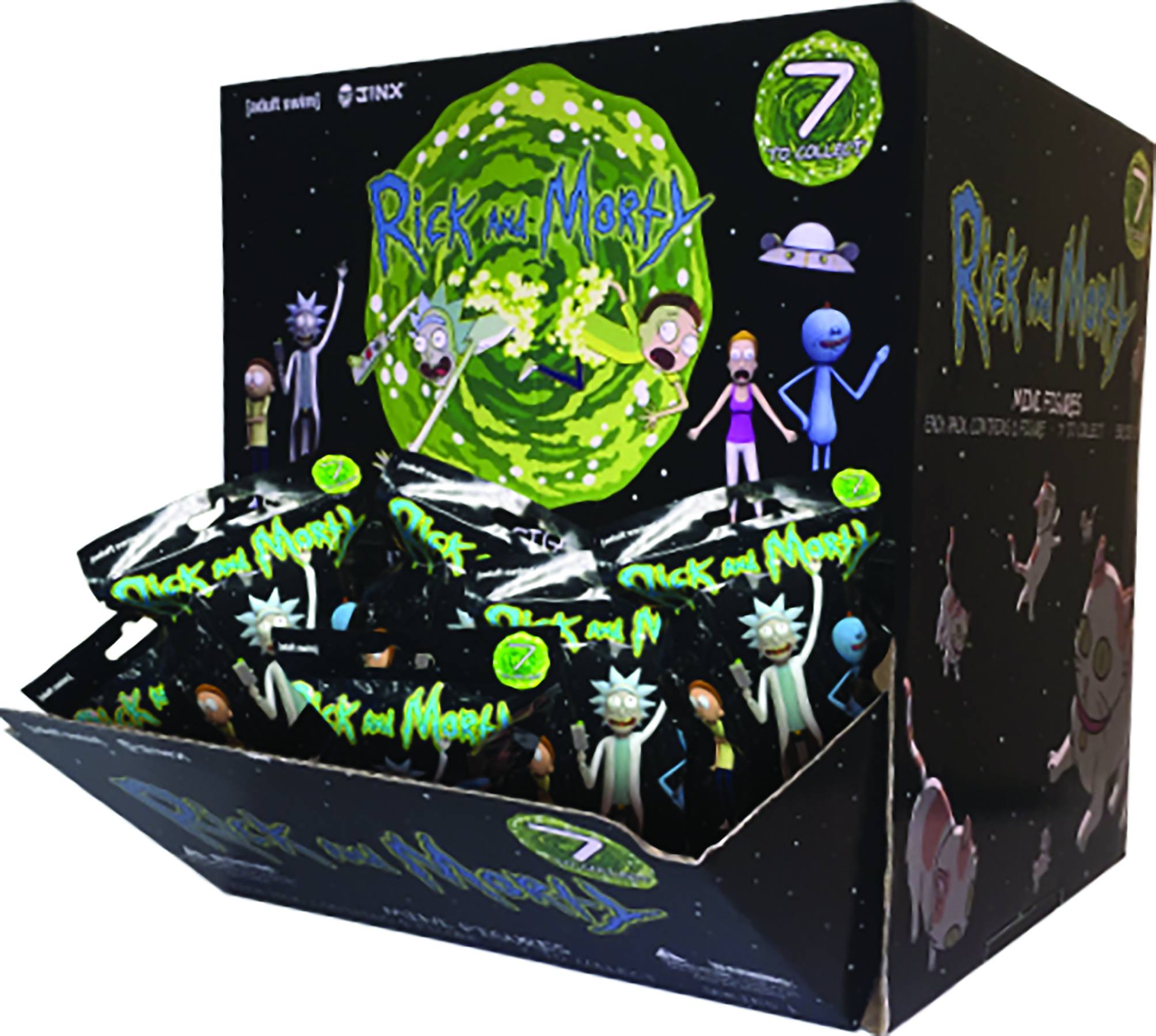 Some minor quibbles aside, I really do love J!NX’s Rick and Morty blind box mini figures. Except for the spaceship. I mean, seriously…the spaceship? Talk about lazy. At least give us the laser arm-brandishing, spider peace-brokering, melting ghost baby-making version! But I will gladly display even the stupid ship alongside the others on my desk if it means more wacky side characters in Series 2, dawg! It is essential that you buy these, if for no other reason than to prove there is a market for them, bringing us that much closer to having a 1:48 scale plumbus in every home. And also because creating a demented Rick and Morty-themed terrarium is just the the thing to tide you over until Season 3.

This review is based on retail samples provided by J!NX.

Even though Series 1 of J!NX’s Rick and Morty blind box mini figs plays it safe with the figure selection, the sculpt and paint is great and the price point won’t break the bank. Unless, against all odds, you keep get duplicates of Rick’s spaceship. Seriously, f*ck the ship.