I have been playing Dungeons & Dragons since late 2003 after I opened a small comic book and gaming store in the town of Norfolk, NE.  Being new to the D&D scene (I had heard of it of course, but never knew anyone who played), many of the people who started out as customers, quickly turned into lifelong friends and would hang out at the store playing the games that they loved in a place where they could sit down and enjoy a few rounds with others who felt the same way about their game of choice.  One Saturday evening, some of these same people convinced me to grab a seat, roll up a character and give D&D an honest a try.  I have to admit that I was instantly hooked and really enjoyed the freedom to be anyone or anything I wanted within the role-playing style of gameplay that D&D offers. 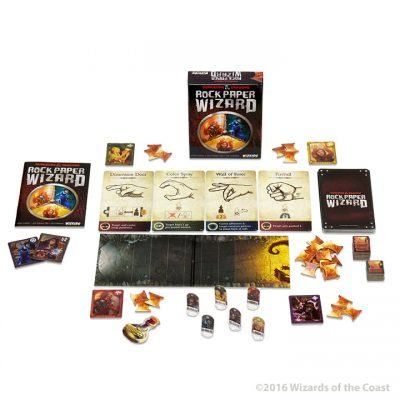 While choosing characters, classes, magic spells, weapons and a lucky set of twenty-sided die might sound a bit daunting to some tabletop gamers, this new take on the classic RPG boils all of that down into a more streamlined and focused experience.  Wizkids has taken the essence of traditional D&D gameplay and condensed it into a more manageable and fun time with their new card game, Dungeons & Dragons: Rock Paper Wizard.  This fast paced, high energy card game combines strategy, luck and a keen understanding of the zero-sum hand game, Rock Paper Scissors!  So grab between 3 to 6 of your best friends, clear off the table and let that old stinky dragon have it right between the eyes because he is sitting on a horde of gold that you all want and are willing to do anything to get it; including fighting each other. 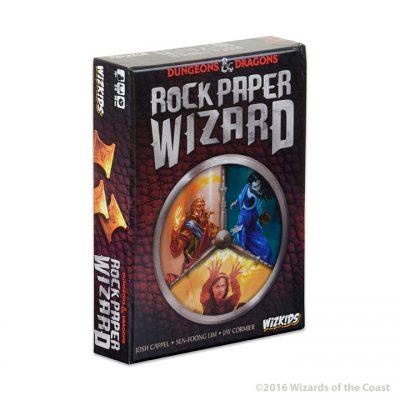 As a game of Dungeons & Dragons is designed to be played, you set out with your party on a quest to defeat a dragon and steal its hoard.  Upon completing that quest and reigning victorious over the fiery beast in its treacherous cave, you and your fellow adventurers need to decide how much of the hoard goes to each wizard.  As wizards are prone to do, an argument breaks out over how to fairly distribute the spoils of this quest.  And as you could probably guess, what happens next with individuals who possess an innate knowledge of the arcane arts will do, is to lash out at each other.  You must use all of the tricks of your trade to defeat your fellow adventurers and get as much of that dragon’s hoard for yourself as you can. 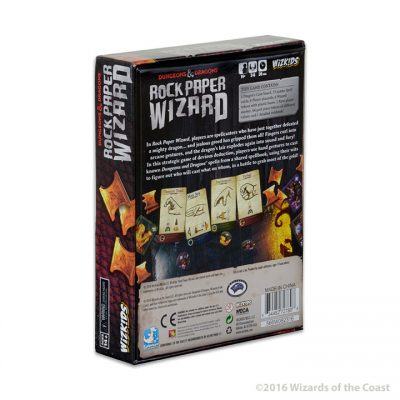 What’s In The Box

Upon opening the box, you will see the deck of 23 Spell Cards the make up the entirety of the deck.  Next to that are 6 plastic bases that are used to hold the Wizard Markers.  Under the deck and the bases are the 6 Player Placards, the 6 Wizard Markers, 64 Gold Piece Tokens and 1 First Player Marker that you must punch out of the sheet of cardboard that they are printed on.  Next is the instruction manual and as the name suggests, this manual gives you the breakdown of the game in easy to understand instructions with full color images of gameplay in action.  Finally, you will find 1 Dragons Cave Game board on the bottom where all of the action takes place. 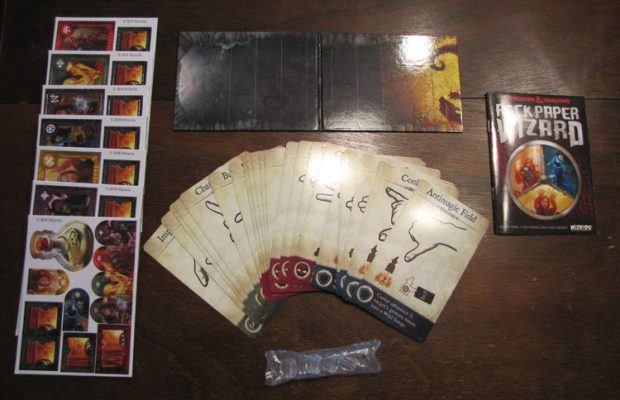 Dungeons & Dragons: Rock Paper Wizard is played in rounds, where players cast actual Dungeons & Dragons spells at each other from the spells in the deck all at the same time.  These spells are cast by using specific hand gestures to cast them.  The spells have all types of effects but are mainly focused on pushing your opponent farther away from the hoard while moving you closer to the hoard.  Spells can also have an effect on your opponents stash of gold pieces as well.  At the end of each round, the wizards that are the closest to the dragon’s hoard can grab some of those pieces.  The first wizard to 25 gold pieces at the end of a round is declared the winner.

You need 3 – 6 participants in order to play Dungeons & Dragons: Rock Paper Wizard.  Each player begins the game by choosing the Player Placard of the wizard that will be representing them as well as placing the corresponding Wizard Marker on the Starting Space of the game board.  In addition, 3 gold pieces are given to each player with the rest being placed at the end of  the game board that represents the dragon’s hoard.  The Spell Cards are shuffled and placed face down above the dragon’s hoard with spell cards in the same amount as there are players, but no more than 5, placed face up to the left of the deck; this is the Spellbook.  One player is chosen at random to be the First Player, given the First Player marker, and the game begins.

Each round consists of five quick steps: Study, Cast, Resolve, Scoring and Refresh.  Study happens by simply taking a few moments to peruse the Spellbook and to secretly decide which spell you are going to cast at which player then raising your hand in a fist gesture to signal readiness.  When all players are ready, the Cast step is initiated by everyone chanting together “Rock, Paper, WIZARD!” while pumping their fists down in time with each word of the chant.  On, “WIZARD!,” all players must simultaneously point the spell’s hand gesture at their intended target.  The Resolve step happens with the First Player and proceeds clockwise to resolve each players spell.

Scoring happens once every players spell has been resolved.  The wizard closest to the hoard collects 5 gold pieces while the next closest collects 3 gold pieces from the hoard. Ties collect the full amount of gold pieces for their proximity to the hoard each.  Finally, the Refresh step takes place by returning wizards pushed out of the cave back into the fray, the left most spell in the Spellbook is discarded, all remaining spells are shifted left and a new one is drawn from the deck and placed in the Spellbook, and the First Player Marker moves clockwise to the next player with a new round then beginning. 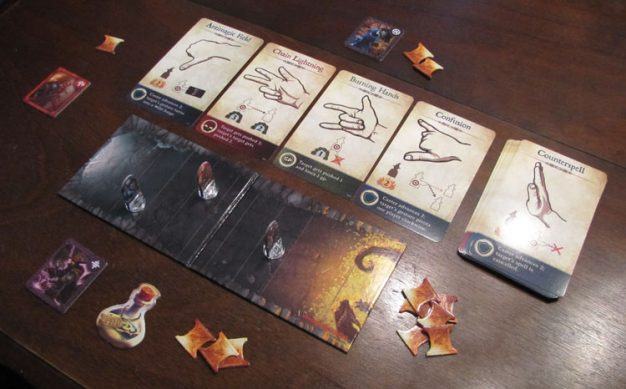 Games in Dungeons & Dragons: Rock Paper Wizard take about 20 – 30 minutes to play so multiple games can be played if there are more than six people who want to play or if you just have a few hours to enjoy a quick gameplay session with friends.  I found that there needs to be more cards that you can swap in and out of the deck because it can get a bit monotonous using the same ones over and over.  From what I understand, Wizkids will be adding more spell cards to the game in the future so it’s just a matter of waiting for them to release.  In addition, I initially was skeptical that once I punched out all of the game pieces from the sheets that everything would not fit back in the box, however, surprisingly it all did ensuring that I would be able to neatly store the game when not in use.

Overall, my friends and I had a blast with this cool adaptation of the Dungeons & Dragons formula.  Gameplay is fast-paced and hilarity ensued whenever a new round would begin.  You never know how a round will begin or end which adds to the fun because you never know who is going to target who until the spells are cast.  If players start to pick on one particular player, which happened often during my play sessions, the game got a little lop-sided, but mainly everyone seemed to focus on the person who posed the greatest risk to their success in the game.  You can find Dungeons & Dragons: Rock Paper Wizard at your finest games retailers now for the asking price of twenty gold pieces (not really: It’s $19.99).

This review is based on a copy of the game that was provided by the publisher.

Drill that old dragon right between the eyes.

– Initial pack of spell cards could be larger