Between panels, loot shopping and trying out soon-to-release games like Final Fantasy XV and Tekken 7, my boyfriend and I spent a fair amount of time in the indie game showcase section of PAX Aus 2016. During our time in this most crowded and frenzied of sections, we happened upon a charming and colorful game called GoatPunks. Rather, I was lured in by the colors and ample bowls of Starburst Chews, but I stayed for the goats and fireballs. Together with other con-goers we played many, many rounds of GoatPunks, to the point that it soon became our go-to activity between other events. 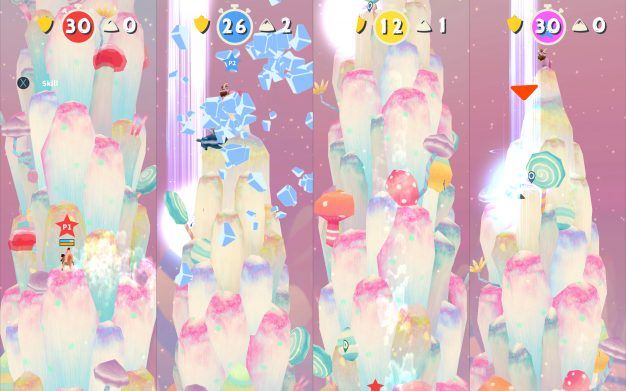 Just a few short months later, and the early access edition of GoatPunks finally available on Steam. GoatPunks is a fast-paced, colorful and energetic multiplayer game that’s all about exquisitely-dressed goats fighting to see who can stay on top of a themed hill for 30 seconds. Players can headbutt their friends, shoot fireballs and lightning at them, and knock them off the top of the hill while saying inappropriate things about said friend’s mother; that isn’t part of the game itself, those are just in-house multiplayer rules.

Four players go head-to-headbutt in splitscreen, fighting through an onslaught of bombs, obstacles and other players to climb to the top of nine vibrantly-themed mountains. All you have to do is stay at the top of the mountain for 30 hectic seconds – shooting down your friends if they dare to come close enough – to claim victory. While at first it’s everyone against everyone else, once you stand at the top, your friends will find a common enemy – you. 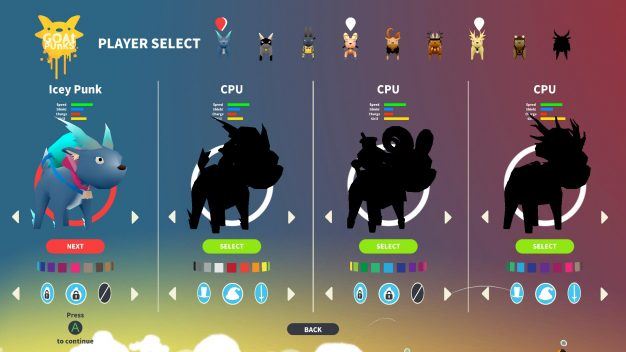 Players can find weapons, shields and power-ups scattered over the mountain. These item can be picked up by traversing over them. The stages claim to vary in complexity in order to provide a range of challenges, although my experience was that they were all more or less the same physically, barring the coat of themed paint on each one (e.g. candy-themed, ice-themed). That said, during my playthrough the game threw out different level-based challenges such as defeating a boss and using X number of certain attacks on other goats.

GoatPunks is an adorable, addictive little game made by one-man development studio Studio Canvas. Said solitary developer Alberto Santiago has created a game which features nine punks to choose from, nine stages (most of which are themed after similarly-styled goats), local four player multiplayer and a single-player mode against AI, online multiplayer (which is still in beta). GoatPunks supports Steam, PS4, Xbox One and Xbox 360 controllers as well as two keyboards using WASD and arrow keys. 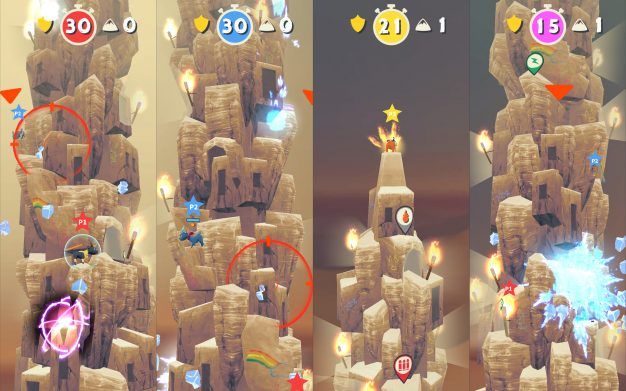 As for my experience with the game, it hasn’t changed much if at all,since PAX in terms of the actual gameplay; although, at PAX I was playing four player multiplayer rather than against AI with selectable difficulty levels. That isn’t necessarily a bad thing, either. GoatPunks’ simplicity and quick levels is where it shines. While the game is super fun, it is easy to tire of doing the same challenge over and over. I think the addition of differing challenges in the single player mode will help keep gameplay fresh, but this isn’t the kind of game you play all night. This is the game that you leave running at a party for people to occasionally jump into as they walk past. I can also see it being a great, albeit slightly more involved, way to solve arguments instead of doing the adult thing and playing paper-scissors-rock whenever you want to figure out who’ll do the dishes this time.

The music is punchy and cute, as are the little sounds the goats make when they’re struck by another enemy’s attack. Both fit perfectly into the vibrant, hand-painted aesthetic of each stage. There are a good number of goats to unlock and choose from, each with their own strengths. The difference in goat speed and attack power isn’t immediately apparent, but the game is still in early access, so I’ll forgive it for not being perfected as yet. 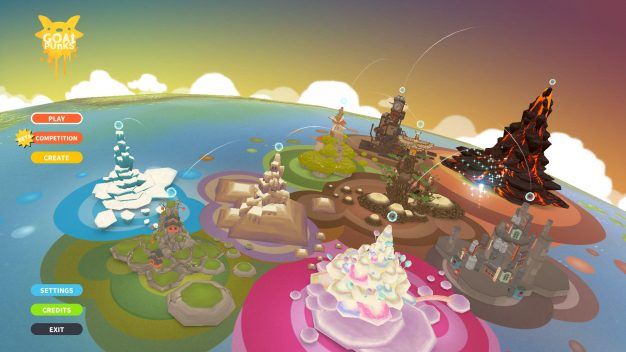 Studio Canvas claim that following the early-access version they hope to improve local multiplayer, expand online multiplayer capabilities, add new add-ons, game modes, new characters and stages. Together with the pre-existing customization feature on some of the goats in the early-access version, I can see a bright future full of equally brightly-painted goats wearing silly costumes for GoatPunks. And if that doesn’t excite you, it has goats that shoot fireballs on the top of candy mountains. What more do you want?

This preview is based on an early access version of the game provided by the publisher.