I recently had the pleasure of attending a book signing with Elise Kova who was in town to promote her new book, The Alchemists of Loom. USA Today bestselling author of the self-published Air Awakens series and now the Loom Saga (published by Keymaster Press), Elise fielded questions from the crowd that slowly revealed her love for anime and video games. After discussing references to Bloodborne and The Witcher 3, I thought it would be great to ask Elise some questions about her new book and gaming. 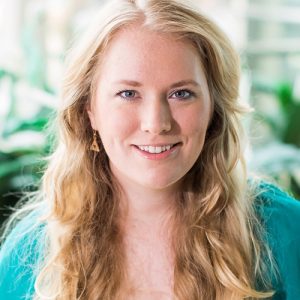 TVGB: Could you tell us a bit about The Alchemists of Loom?

Elise Kova: Certainly! THE ALCHEMISTS OF LOOM is the first book in my latest high-fantasy/steampunk series the Loom Saga. It follows the story of an organ thief, Arianna, who encounters a Dragon (not like the Dragons you know) and decides to help him in exchange for a magical wish. Arianna isn’t too fond of Dragons, and when the king’s assassins, her spirited apprentice, and two prison escapees get involved along the way the journey is anything but easy.

TVGB: You mentioned that video games were an inspiration for your writing. What particular games were the biggest influences for The Alchemists of Loom in terms of world building and/or characters?

EK: I’ve always loved video games, so it’s not easy to pull out all my influences as they’re such a big part of my life. That being said, a few that certainly helped inspire the Loom Saga were Bloodborne and Zelda Skyward Sword.

The sky world of Nova floats high above the world of Loom below. Bright and filled with color, it’s occupants traverse the many islands by riding on the backs of large bird-like creatures called boco. Another influence on this front was certainly chocobo from Final Fantasy.

Where Zelda inspired Nova, Bloodborne inspired the world of Loom below. Loom is a gritty steampunk wonderland cast in eternal twilight. It’s a harsher reality that the macabre tones of Bloodborne really helped give atmosphere to.

TVGB: How many books do you have planned for the Loom Saga?

EK: I’ve always intended for the series to be three books… But, I called it a “saga” over a “trilogy” because high fantasy can stray toward longer word counts despite the best intentions.

TVGB: This series has a very unique magic system where body organs have specialized powers. Which one Dragon power would you want to have?

EK: I would love to have the power to make illusions — which is magic in the hands. I think I could have so much fun with that ability on so many levels.

TVGB: What video game character(s) would most likely have a cameo in this book series?

EK: Well, excluding any characters/monsters from Bloodborne… I would say perhaps Ezio from the Assassin’s Creed franchise. Many of Arianna’s movements as she uses her engineering skills for nefarious purposes I imagine to be nimble like Ezio. Furthermore, I think my cover illustrator, Nick Grey, drew his own illustration for Arianna’s visual representation from Ezio’s character design.

TVGB: Have you written any fan fiction of video games?

EK: None that anyone will find anywhere! ;D

TVGB: What are you currently playing?

EK: Right now I’m in a replay mood… Bouncing between Zelda Twilight Princess and Catherine while I’m waiting for the next Dark Souls III DLC to be released.

The Alchemists of Loom is available now wherever books are sold. It’s a great read and I highly recommend it! You can find out more about Elise Kova and her upcoming entry into the Air Awakens series by visiting her website http://elisekova.com or visiting her social media links below.

Book Summary:
Her vengeance. His vision.

Ari lost everything she once loved when the Five Guilds’ resistance fell to the Dragon King. Now, she uses her unparalleled gift for clockwork machinery in tandem with notoriously unscrupulous morals to contribute to a thriving underground organ market. There isn’t a place on Loom that is secure from the engineer turned thief, and her magical talents are sold to the highest bidder as long as the job defies their Dragon oppressors.

Cvareh would do anything to see his sister usurp the Dragon King and sit on the throne. His family’s house has endured the shame of being the lowest rung in the Dragons’ society for far too long. The Alchemist Guild, down on Loom, may just hold the key to putting his kin in power, if Cvareh can get to them before the Dragon King’s assassins.

He offers her the one thing Ari can’t refuse: A wish of her greatest desire, if she brings him to the Alchemists of Loom.