Back in the very early 2000s, I tottered down to the local video rental shop with my mum and found the holy grail of janky-yet-addictive games. Digimon World was Bandai’s first Digimon title to make it to the PS1, and it was janky, horribly translated, and parts of its digivolution system are still not fully understood by the gaming community. But even with all its flaws, Digimon World was a fairly unique pet-raising game. Most of the following games in the series did away with many of its systems in favor of a more traditional RPG approach (i.e. turn-based combat). Digimon World: Next Order has been a return to form, and seems to have been developed as a love letter to the fans of the original PS1 title. Though I went in with great enthusiasm, I was left with some dashed expectations but also with a game that’s still fun to play. 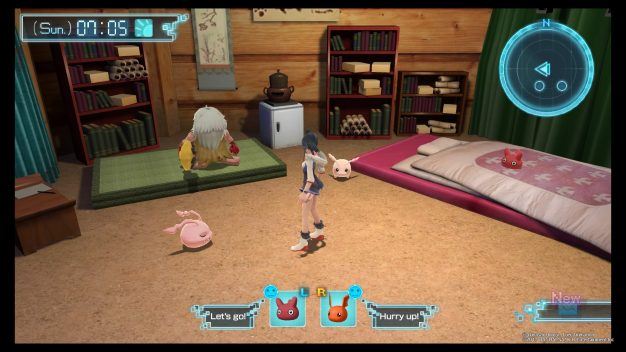 Fresh as a daisy

The original Digimon World had a simple premise: you somehow get sucked into the Digiworld and wind up in a village surrounded by Digimon, chief among them (literally) being Jijimon. Jijimon helps you choose a name and the time, and then assigns you a Digimon as your partner. Your job is to raise your Digimon through battle and stat-training in the training grounds east of town. You also have to raise and scold it when required, make sure it sleeps, feed it, and make sure it uses the bathroom (please don’t litter the Digiworld with digipoop).

In essence, it was a much more graphically impressive Tamagotchi. As you get stronger and your partner digivolves into (hopefully) better Champion and later Ultimate level Digimon, you will be able to explore more of the world around you. As you explore the world, Jijimon will request that you convince specific other Digimon in the wild to join the town. Doing this adds shops and services or upgrades old ones (i.e. Tanemon’s, er, meat farm, grows larger and provides you with more food each day). 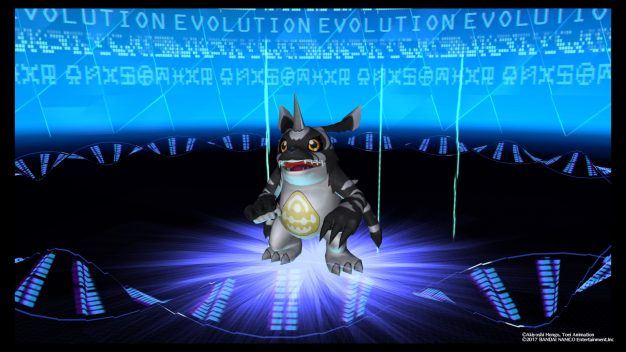 Comparatively, in Digimon World: Next Order your player character, whom you can choose to be a boy or a girl (I implore you to choose a boy for reasons I will go into later), is sucked into the Digiworld. You are met by your two Digimon partners (note: Tamers never have more than one partner, so clearly you’re special) from long ago. After a series of battles, they pass on and you end up in a village with Jijimon, who helps you reincarnate your partners as brand new Digimon.

There are multiple eggs to choose from, which will immediately hatch into starting level (Fresh) Digimon. You then have to train these Digimon up in the new training room, which is now as simple as selecting the stat you wish to raise from a menu. Once your Digimon are Rookie-level, you can take them out into the world to forage for items and engage in battles. You have to feed them, make sure they sleep and use the bathroom, and praise and scold them as necessary. Jijimon requests that you search for other Digimon to recruit. This will expand the village and make new services available and upgrades old ones…sound familiar?

The story has changed in that you can find other humans who have been thrown into the Digiworld, there are brand new environments to explore, and new Digivolution trees available. I never finished the original game because I was a small child working with a rental copy, but I doubt it had this level of “story”. In essence, the main goal is the same: Raise Digimon, Fight Digimon, Recruit Digimon. 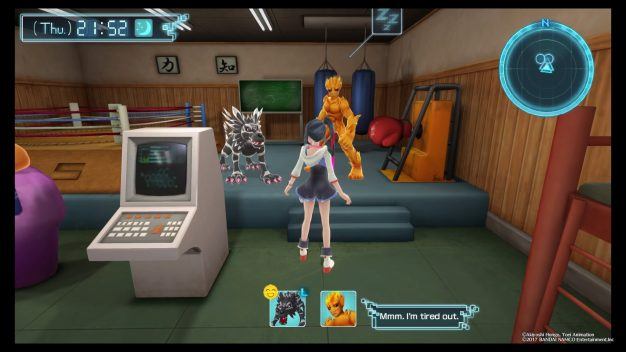 Training a Digimon raises a single stat (e.g. Wisdom, Strength, HP). Throughout the course of the game, certain actions (i.e. praising or scolding your partners, battling) will take away the “???” on stat requirements for the available Digimon on the next level of the digivolution tree. Unlocking all of these will make it easier to know how to train to get a specific Digimon (assuming you care). As I mentioned earlier, training your Digimon became less tedious than in the original PS1 game. You barely have to lift a finger to train a variety of stats in a short space of time. If you’re a fan of games like Disgaea, watching the numbers go up after each training session will tick some boxes. If you don’t like stat-grinding, Next Order isn’t the game for you. Some of the digivolutions I received still felt a bit random, but that may just be a result of not unlocking all of the possible parameters in order to train my partners correctly.

Next Order, unlike its PS1 predecessor, actually gives you a helpful battle tutorial. So far as I can recall, the original gave you absolutely no instruction whatsoever. Your Digimon act on their own (you can select tactics for MP use) and you hit the Support button as they attack to gain Order Points. The more order points you have, the more impressive things you can order them to do via direct input from you. One crucial downside to battling in Next Order is that your Tamer level doesn’t seem to correspond to the level of enemy Digimon. Your partner Digimon aren’t given levels, so it can be impossible to tell whether a level 3 enemy is going to absolutely roast your Champions, while a level 7 may go down in one hit. The game doesn’t explain that the coloured lines beneath an enemy’s name (when they’re free-roaming in the field) indicate whether they’re a good or bad match for your partner’s’ current level.

In Next Order, there are two difficulty levels: Easy and Normal. I chose normal because, y’know, what do I look like? A wuss? My boyfriend commented on how poor the stat increases during training were, and how insanely hard some of the low-level enemies hit. A quick search of the original Vita forums for Next Order revealed that the difficulty levels are actually Easy (aka normal) and Normal (aka HARD). Luckily you can change the difficulty level mid-game. Do not select Normal. You will have a frustrating time. 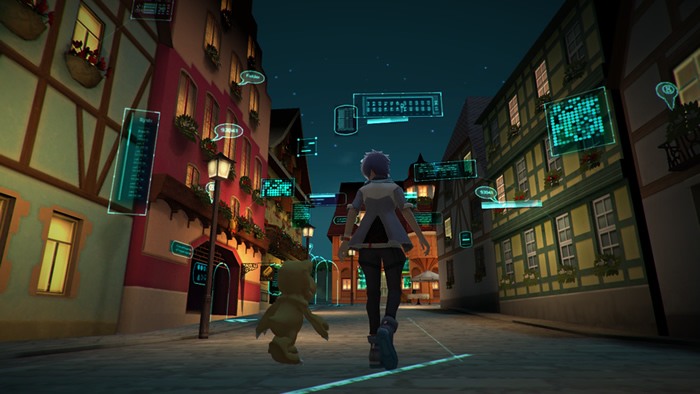 Music and other Sounds

Speaking of a frustrating time, let’s talk about the music of Digmion: Next Order. It’s…well, it’s lacking. I have nothing to say about it other than “it’s really nothing special”. The opening (vocal) song is exactly what I would expect from an anime-style adventure game, and that is one of the songs that’s actually good. The battle themes and world map themes are nothing special, but drive themselves into the ground by being on a short, repetitive loop. I’ve taken to muting the TV and putting on my own music in favour of actually listening to the OST for the actual game. However, the soundtrack is not the only reason I’ve been doing this.

I said earlier that no one should choose the female main character. This is only because her voice acting is so unbelievably bad and grating that it was the original reason why I muted the TV during play. I later found out that you can mute just voices (but not Digimon sounds) in the settings and I was happy again. My boyfriend played as a male character and the voice is perfectly palatable. That said, the voice acting in this game is pretty terrible. You won’t miss anything by muting the voices. 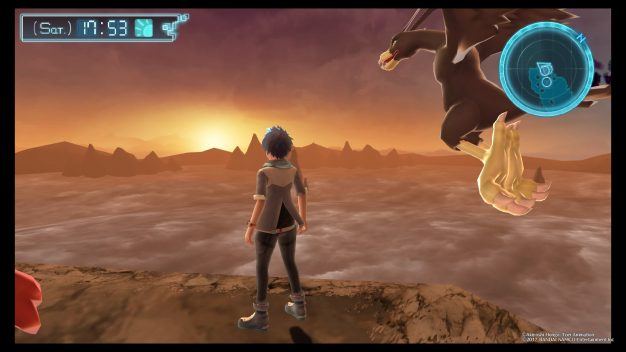 Pick this guy instead. Trust me.

The graphics in this iteration of Digimon World are bright, colourful and littered with the usual hints that you’re in the Digiworld and not just another fantasy landscape. On your travels you’ll see giant batteries stuck in the ground, server deserts filled with dead computer towers and a variety of other digital knick-knackery. Even the hood or hem of your character’s shirt seems to be leaking pixels.

Is the game colourful? Absolutely. Is it a graphical masterpiece? Heavens, no. It’s pretty enough, and most of the time your Digimon won’t clip through each other or block your view. Unless you have two gigantic bug Digimon at your disposal – then yes, you may find your view of the world map blocked more than once. That’s not really a graphical glitch, though, that’s just those two being jerks. 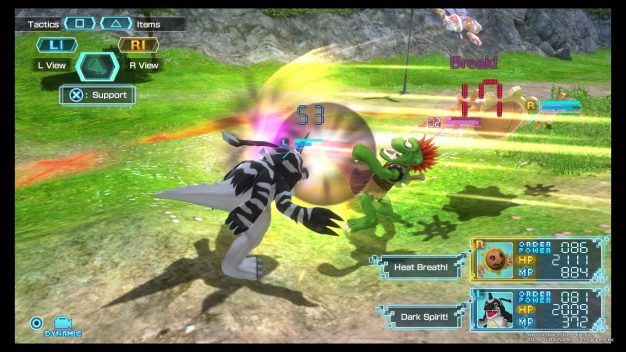 With the actual storyline treated as a mere afterthought throughout most of the game, Digimon World: Next Order relies heavily on its main goals of raising your partners and finding new villagers. If you’re not into stat raising, filling out evolution trees and recruiting new Digimon, Next Order will quickly become tedious to play. For someone like my boyfriend who thrives while playing games like Disgaea, this game is sure to eat up hours of time. For me, I’m happy to spend one or two hours playing, but unless something exciting (i.e. a Digimon digivolving) occurs within that time, I’m usually tempted to put it down for a few hours or until the next day.

The battle system is unique in a good way and once you get the hang of it (and put your difficulty down to easy) it’s very fun to test your skills or just beat up a few weaklings here and there for the hell of it. The game could stand to introduce a few more things in the form of tutorials, such encountering enemies in the field and specifically which are safe to encounter and which may pose more of a challenge. While I don’t call for more tutorials in games very often, I seldom enjoy being given 90% of my education on how to play the game in selectable lists via one NPC. As stated earlier, the music is nothing to write home about, as well as being a bit repetitive, and the voice acting is absolutely shocking. I’d be happy to play the game for weeks to come so long as I didn’t have to have the sound on. 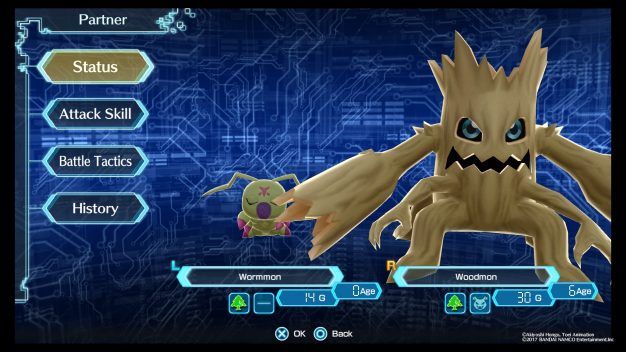 If you’ve never been a fan of Digimon in any context, and you don’t enjoy games around pet raising or stat building, you’ll feel like you’re playing a really low-grade RPG with no substance and some damn pets you’re forced to keep alive. If you’re a fan of Digimon, or the original Digimon World PS1 game in particular, I would encourage you to try the game, although at a reduced price. Despite everything I’ve said that may encourage you not to pick it up, I would never deny how much fun it can be to play.

Digimon fans of all ages - come visit the Digworld soon; your partners missed you.

Simple yet aesthetically pleasing and full of appealing ways to raise your Digimon. If you can look past the frustrating flaws and learn to hug the mute button on your remote, Digimon World: Next Order will give you the Tamer experience you’ve been missing.