Way back in 2012 a simple game called Size Matters took home 1st place at the Global Game Jam. After this win, Size Matters was picked up by the studio Gamious to form the base for their game iO. This new game, iO, became an exclusive for the failed Ouya project in 2014, before seeing a release on Steam and on mobile devices. Now iO and Gamious are setting their sights for a new market as they release on the current generation of consoles.

iO is a challenging physics based puzzler that tasks the player with figuring out the best way to manage their momentum to get to the goal. While the levels themselves can range from simplistic to sadistically impossible, an added challenge on top is that your completion speed is graded with either a gold, silver, or bronze medal. Trying to get through all 225+ levels with a gold medal is a massive feat of patience and prowess.

As far as gameplay is concerned, you control a simple ball with the ability to shrink and grow. The shrinking and growing affects the momentum that you have while rolling. If you shrink just before going off a ramp it will launch your ball further. If you grow while in the middle of a loop you will slow down and fall off. 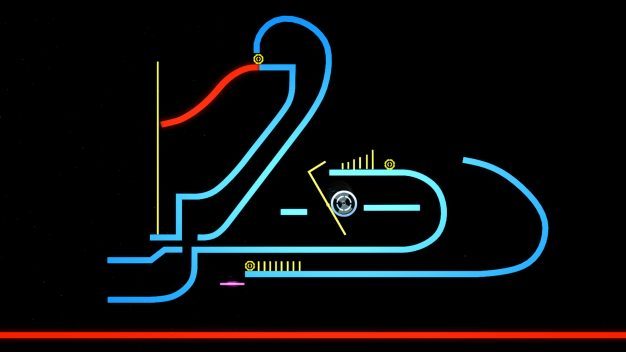 You need to manage your size and momentum to get through obstacles such as movable platforms, gravity reversers, and transporting portals. Another feature that is greatly appreciated is the ability to quick restart any level if it’s not going your way. The simplicity works in iO’s favor, as they give you just enough to grapple with to make it satisfying once it all clicks together to get those gold medals.

While simplicity works well for the gameplay mechanics, the overall aesthetic of the game seems to cross the line from “simplistic” to “uninspired”. The ball that the player controls is the most animated thing on screen and seems out of place along levels that are just plain blue, red, or yellow lines. The level designs are effective, but they look like they were drawn for a flash game in the early 2000’s. As a game on a modern system I expect a little more eye candy than what I could find on Newgrounds.com when I was in 8th grade. 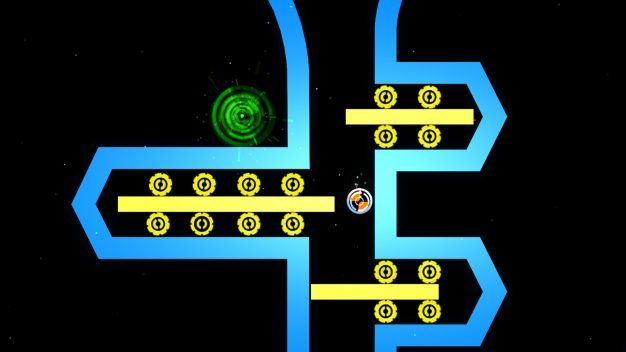 iO feels very much like a mobile game. The simplistic controls and UI lend itself to a pick-up/put-down play style that seems to be the main goal for mobile titles. While reviewing iO, I felt like I was chained to my television, when I’d much rather play this game on the go. In fact, I could see this game getting more playtime as an app that I could pull out at any moment rather than only in my living room after turning on a console and dedicating myself to a gaming session.

There are some cool physics based mechanics and a breadth of levels of varying challenge in iO, but the presentation leaves a lot to be desired. The levels are uninspired and not very pleasing to the eye. On top of that, it is even harder to recommend this game as a console purchase, when the mobile version of the game is just so much more practical. If you’re the type that gets the most out of your games when you are challenged to stick a momentum based platform jump or hit a portal at the right angle to launch yourself to the goal, then iO could be right up your alley.

Expand or shrink your rolling ball to navigate puzzles and mazes for a gold medal. The mobile version will is almost guranteed to get more of your attention than the console port.