Knee Deep, a “swamp noir” mystery from Prologue Games, aims to be the spiritual successor to Twin Peaks. Set in the forgotten town of Cypress Knee, Florida, the quirky community is suddenly rocked by scandal and intrigue when a formerly popular actor is discovered hanging from the water tower of rundown tourist trap Chief Roadside’s Wonderland. You can play as three different characters at different points in the game, each struggling personally and professionally. 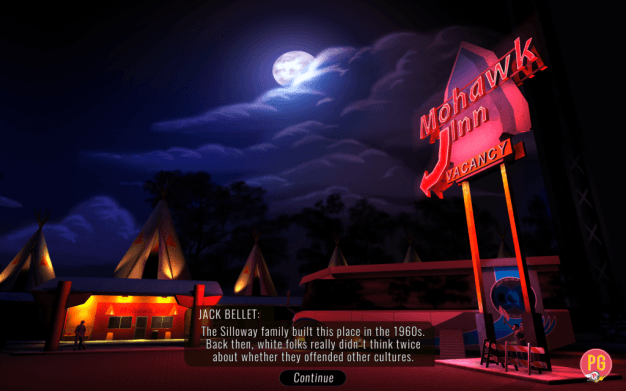 Romana Teague is a disgraced celebrity gossip blogger who just happened to be passing by when the news of the dead actor broke. Jack Bellet is a divorced reporter for the local paper, having returned to his hometown after being unsuccessful as a reporter in the big city. K.C. Gaddis is a private investigator so down on his luck that he is preparing to commit suicide when he is tasked with investigating the actor’s death for the studio. Through the first third of the game, the three barely interact, despite the fact that they are all gathering information about the suicide. Very quickly, they are able to gather information about Tag Kern, his recent box-office failures, his suspicious girlfriend, his new project with Red Eclipse studios, and his devotion to thinly-veiled Scientology stand in “The Church of Us”.

What sets Knee Deep apart from other mystery games is that it is not a true murder mystery- it is a play. With huge rotating sets, buildings whose walls retract into the stage so that the audience can see inside, and gasps and applause from the crowd at appropriate moments, the protagonists, villains, and other residents of Cypress Knee walk spotlighted through the story. The way that the game moves through this environment shows a lot of creativity, with all events framed as something that could actually be done with theater special effects, including a scene that is essentially shadow play to depict a battle with an alligator. Each third of the game is another act of the play, and backgrounds are revealed through monologue as well as interactions with other characters. 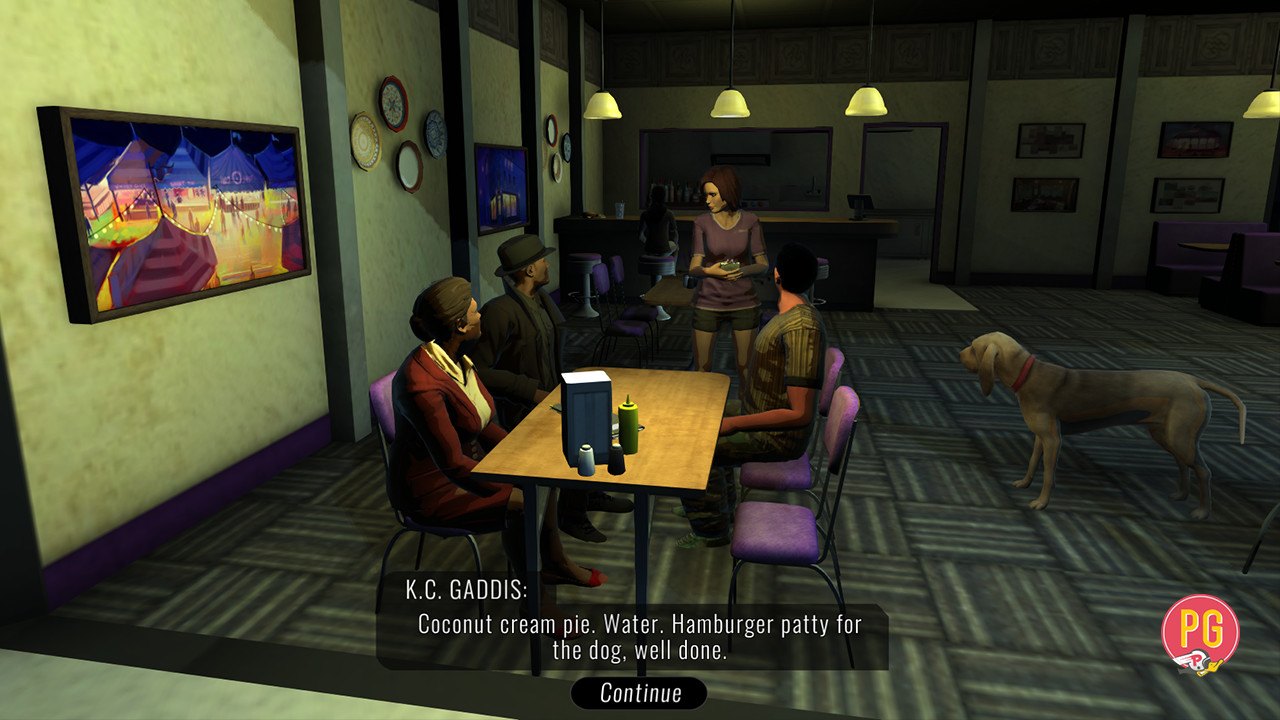 As Romana, Jack, and K.C., gameplay is almost experienced by navigating dialogue trees and choosing which piece of information to report on (whether to blog, paper, or client) and how to spin it. There are a few times where you must solve some puzzle mini-games in order to obtain information or overcome an obstacle, but these are a negligible percentage of play compared to dialogue portions of the game. Players will rarely even be given the option of where to go next or in what order to talk to NPCs, which does fit better into the theatrical performance theme. In fact, at the beginning of the first act, that narrator says that although your choices affect how other characters react to you, you cannot lose the game.

This brings up a big question; how much are you actually impacting your own experience of the game with your choices? I played through twice and I have to say that the answer is- not a lot. Although the story is intriguing, bringing a lot of different plotlines together in unexpected ways, there are very few choices that impact the major plot points of the game. The biggest switch seems to be whether someone feels sorry for you when you get another piece of bad news. 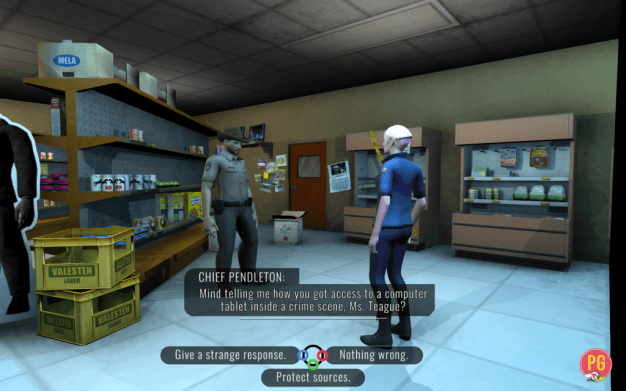 You may also find yourself wondering why the first act is very realistic – featuring murder, corrupt government officials, and interpersonal drama – and the second and third begin introducing more fantastic elements, mad science and Native American spirits seeking revenge. If these had a more gradual introduction, perhaps they would feel a little less jarring when they begin to impact the main storyline. Personally, I could also do without the beginning of Act 2 where the townspeople start doing a group poem about the annual festival and local election, but that’s less of a fantastic element and more of a stylistic inclination. I do appreciate the line from that particular scene that includes the origin of the game’s name: “You can drown in knee deep water if you stand on your head.”

Overall, this is an aesthetically pleasing, visually interesting, and less than predictable mystery. Although it’s more of a vaguely interactive experience than your typical mystery adventure game, it’s enjoyable and has some replay value if only to unlock all the “do that one part different” type achievements. Definitely worth a look if you’re wanting to spend a gloomy afternoon watching something other than Law & Order reruns.  Knee Deep is available on PS4, XBox One, and Steam, now with VR compatibility.

While the story doesn’t disappoint and the swampy scenery and melancholy folk music set the mystery mood nicely, this game is less choose-your-own-adventure and more choose-who’s-pissed-off-at-you.