Streets of Rogue is an interesting, procedurally generated game that describes itself as “The world’s only RPG roguelike action stealth shooter brawler co-op megagame.” It is currently in Steam Early Access for only $15 and has an impressive overwhelmingly positive rating. Noticing its greatness, TVGB’s own band of rogues – Alex, Bronsen and Noe – joined forces to experience all this budding little game had to offer. They weren’t disappointed. 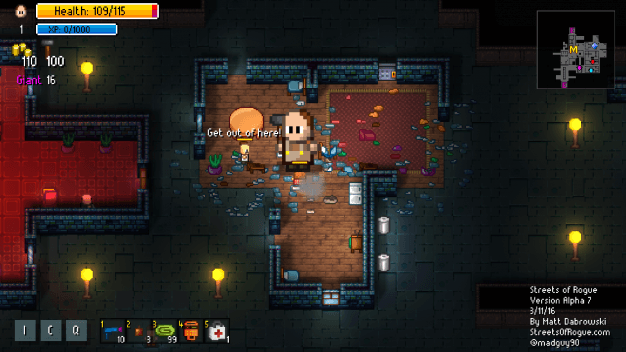 If like me you happen to be a massive rogue-like fan, you’ll absolutely love the new offering from tinyBuild GAMES. Currently in early access, Streets of Rogue is an 8-bit smorgasbord of gory, shooty, explosive fun. You take on the role of one of several unlockable character classes, all with their own unique traits (and some more useful than others,) and go out into the city completing quests and generally trying to survive. A lot of your survival involves stealing stuff and killing people. As all the levels are procedurally generated, it’s a slightly different experience every time.

As with all rogue-likes, you get one shot at completing the whole game. Unlike most rogue-likes, you actually get enough breathing room to think. There are several ways of solving a problem and they don’t all involve going into buildings full of heavily armed goons and or police and getting shot to bits. I find if I need to retrieve something, blowing up a wall is a much more enjoyable way to get it. Something else I get great pleasure from is hacking a computer and turning all of a building’s security systems against its occupants. Want to separate someone from the pack so you can neutralize them? Putting things in a ventilation system and gassing them is a good way of smoking them out and so on. This is a game that is as much tactical as it is action packed. 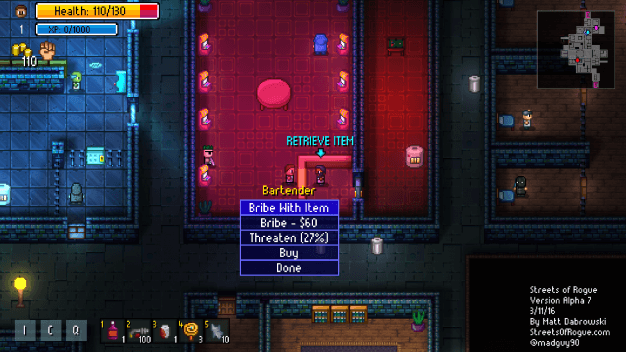 You can do more than kill people in Streets of Rogue.

Everything in Streets of Rogue has a certain tongue in cheek sense of humor to it that I really like. It’s worth reading the different signs dotted about the levels just for a chuckle. There are also disaster levels which ramp up the chaotic pace and add to the fun. It’s very difficult to save someone when there’s a riot going on around you or you’re being hunted by a killer robot. A very important warning: do not upset the ape (though you might want to play as him).

I’ve enjoyed playing this so much that having completed all the current early access stuff I’ve just started endless mode to see how far I can get. This is massively promising and I can’t wait to see what gets added next. Streets of Rogue gives you that “one more game” feeling, and it’s left me wanting more. I’ll be keeping a very close eye on it in the coming weeks and months and can’t wait to play the finished release. 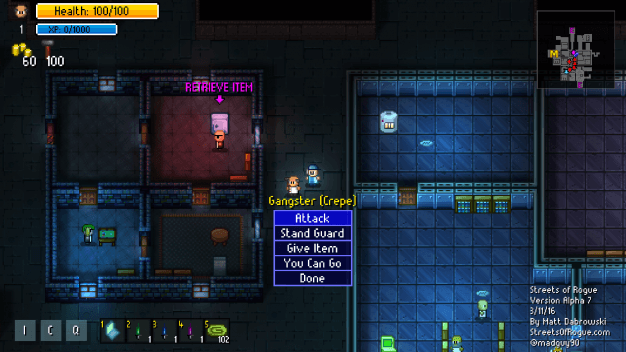 Streets of Rogue is a Grand Theft Auto-styled rogue-like that boast character classes and crazy in-game stories. Levels are procedurally generated and character classes can be unlocked by doing stuff for them in the game. For instance, after saving a genetically altered ape from scientist by lobbing a grenade at the front door and shooting everyone inside, the Gorilla (seen below) was unlocked as a playable character . Nothing is funnier than knocking on someone’s door as a gorilla then beating the crap out of them when they answer.

After earning enough experience points from missions and murder, you are awarded a level up and a new ability. These abilities stack until you die and your character starts all over again from level one. The amount of variation in the game isn’t drastic, as missions tend to be different flavors of the same activity, however this could change with updates and future levels. The dialogue is hilarious with jokes being made about you actually being able to use the controls right from the very beginning. This makes for some entertaining gameplay and “let’s plays.” 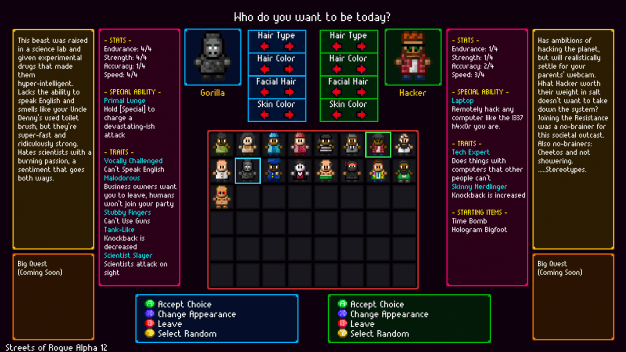 After spending several hours with the game I noticed that the levels can be kind of buggy. This is common for an early access game and is nothing to raise a pitchfork at. At one point I needed a man to follow me to the entrance of the level so that I could finish a mission, but he wouldn’t budge. Multiplayer brings in new types of insanity as you try to coordinate your friends into doing the actual mission. What you want to happen is a smooth heist with minimal casualties. What actually happens is buildings burn and everyone dies.

The best part about Streets of Rogue is that it is pure enjoyment. I was able to recreate Rise of the Planet of the Apes with a bunch of gorilla followers that I rescued from scientists.  Any game that allows you to do that has a bright future ahead of it, and I can’t wait to see how the game evolves. 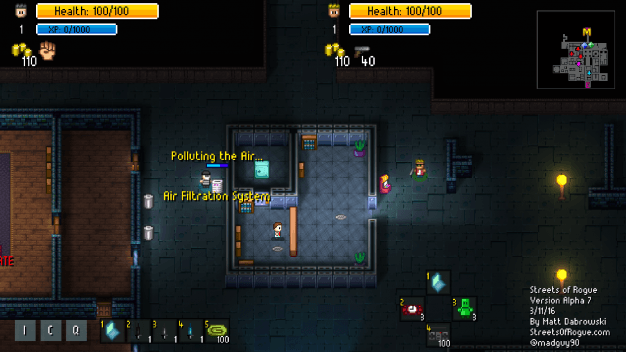 Streets of Rogue is a charming and additive little rogue-like game I had the pleasure of discovering in my Steam queue during its free-to-play weekend. I was hooked immediately, telling all my friends about it. I’m not ashamed to say that I didn’t stop playing until I unlocked all the classes. The variety of classes available, their skills and unique loadouts are what made Streets of Rogue so enjoyable for me.

I wasn’t roped in by just the style of play. I could go stealthy, gunny or punchy. I could play a role that didn’t kill at all. The choice was mine. That choice though, ultimately affected how I completed each mission. If I went with a more passive class but had to break somebody out of jail, I needed to put some real thought into how I approached the mission. It was great. 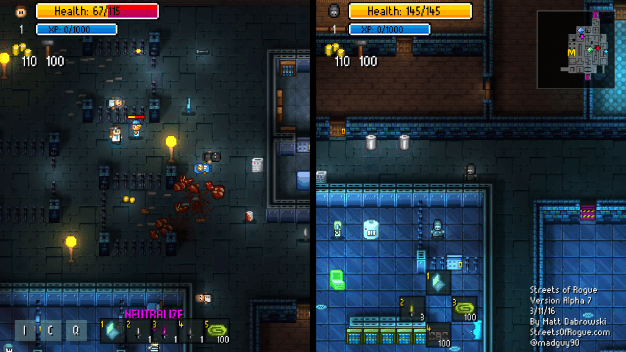 I also thoroughly enjoyed the multiplayer aspect of Streets of Rogue. Teaming up with friends was a blast but could be both chaotic and infuriating at times. I might be trying to sneak into a gangster’s stronghold in order to rob their safe when one of my allies comes along and blows a hole in the safe room’s wall, alerting every gang member nearby in the process. It’s those moments however where you just sit back and laugh. The scenarios you find yourself in can be so hilarious and that’s a huge part of Streets of Rogue‘s charm.

While still early in it’s development, Streets of Rogue is already shaping up to be one hell of a game. The developer said in a recent update that he’s working on a new area for the game. Who knows what else could be on the way? I thoroughly enjoyed my time playing it and I know my fellow TVGB team members did as well. If you’re a fan of the genre, Streets of Rogue won’t disappoint.

This team preview is based on an early access copy of the game provided by the publisher.