I’m strangely proud to admit that I’ve got nodes. There’s tons of them, they’re multi-colored and I love probing them to see what’s inside. No I don’t need cream or an uncomfortable visit to the doctor, I’ve been immersing myself into Archiact’s Darknet on PSVR.

I can honestly say that I’ve got nothing but praise for this game. You take the role of a hacker in a cyber-punk setting. Your task is simple: all you have to do is enter various networks and by hacking nodes within them make your way to the root node and acquire the data stored there and by god, it’s a palpatating ride.

There are three different types of network and these appear as floating orbs in the cloud that you enter at the beginning of every hack. These are denoted by color and represent networks owned by corporations, the government and criminals. If you manage to complete the job presented by each one you’ll get yourself some bit coin and an entry that sits in the news feed that floats in your hub outside the cloud. In a game that in-itself doesn’t have a huge amount of plot this ever expanding list of articles helps to give this title a real sense of setting and story. 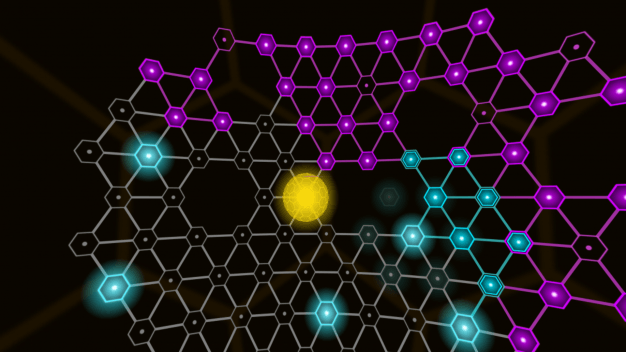 This is a node. Hitting the centre is easier said than done.

Darknet is essentially a puzzle game. When hacking a node a grid appears in front of you which contains floating blue hexes. These represent the system’s anti-virus software. You inject a virus into one of these which turns it purple and sets off a reaction that sees your virus moving towards a glowing sphere at the center of the board. If you manage to hit that sphere, you complete that particular hack.

This sounds relatively easy but should your virus touch another blue node the anti-virus kicks into effect and begins to wipe out what you’ve done, blocking your efforts and possibly making you start again by attacking a different point on the grid. There is actually quite a bit of strategy involved here; you’ll usually need to use multiple viruses to get the job done. The bigger the node you’re hitting, the larger and more complex the grid. You’ll also find other traps and pitfalls waiting for you on some of the more difficult hacks but I’ll not ruin the game by going into those with you here. 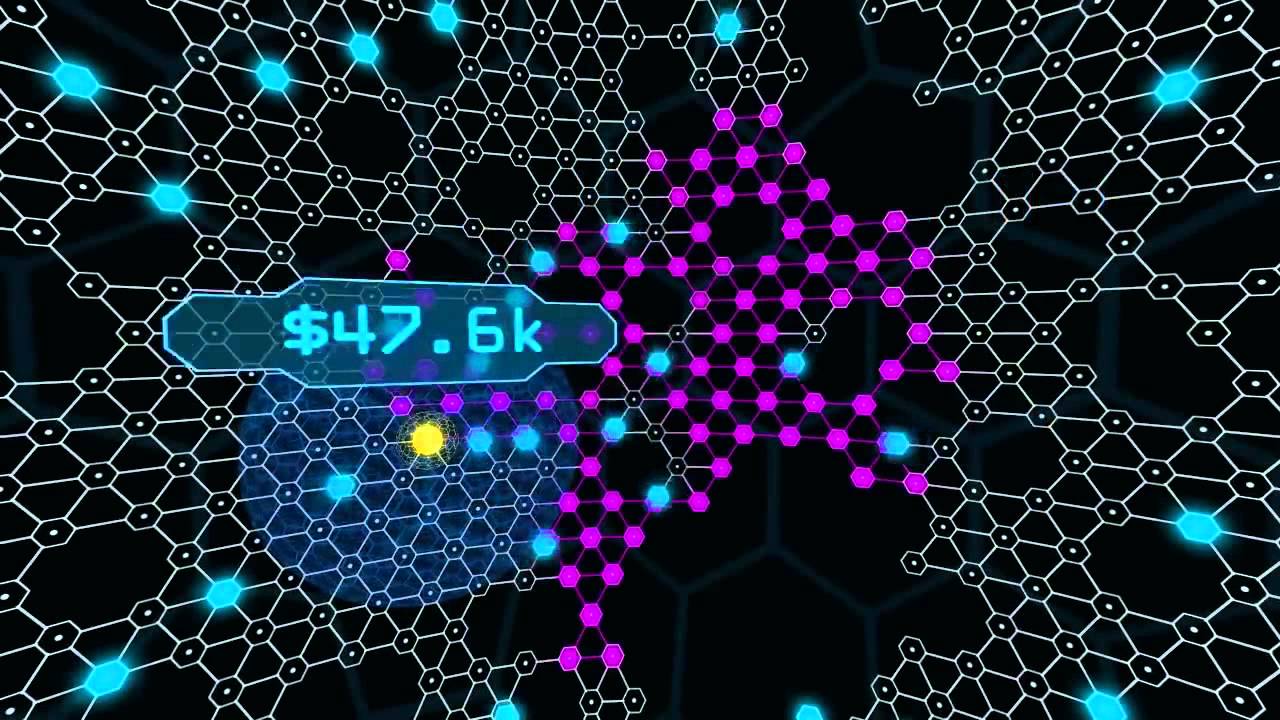 This is also a game of balance. You need tools to complete yours hacks and for this you need money. Different nodes are worth more cash than others and the ones that are worth the most are normally fairly tricky to get to. You are essentially playing on multiple boards. You have your node hacks which I mentioned earlier, but you also have a network overlay. This is a map of connected nodes and it’s here you’ll find the root, your ultimate objective.

Importantly, you can’t just hack anything. Many nodes are firewalled, some of them multiple times and this makes hacking them much harder, some are also shielded which stops some of your tools of the trade from working on them. Then, of course, you have ICE, this completely covers a node preventing you from seeing what type it is and whether it’s defended. You need to buy and use an exploit before you can even see what you’re doing. 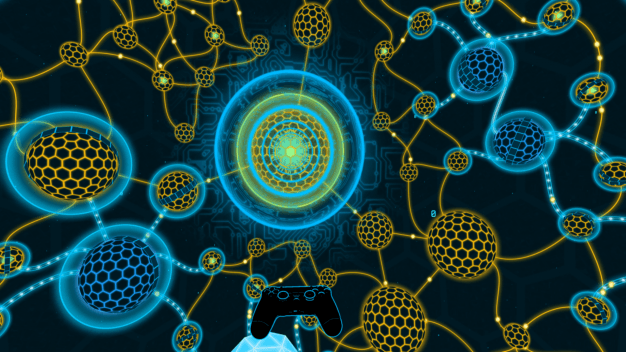 Welcome to the network.

This brings me to your tools. You have you’re viruses and these are your mainstay. The more of these you buy the more expensive they become, so you won’t be arming yourself at the beginning with a bunch of them and walking the level. You also have Hydras which allow you to take multiple unprotected nodes at once, exploits which are used for removing firewalls and ICE and worms which corrupt nodes, dropping the defences of those linked to them. You’ll need a mixture of all of these if your mission is going to be a success.

I completely get that all of this probably sounds really complicated but the game does a very good job of easing you into things. Different hacks have different skill levels and you compare the skill level of the job to your own before you go in. This allows for a really nice learning curve. You can play levels in any order and unless you deliberately go for something completely out of your league you aren’t going to get dropped into something that you can’t handle with a bit of thought. This being said every level is a challenge, (unless you keep deliberately picking easier ones,) but at no point does the game feel too hard or unfair. This is one of the things that makes Darknet so addictive. You know you can do it and you know you’re not out matched, as long as you think and think fast. 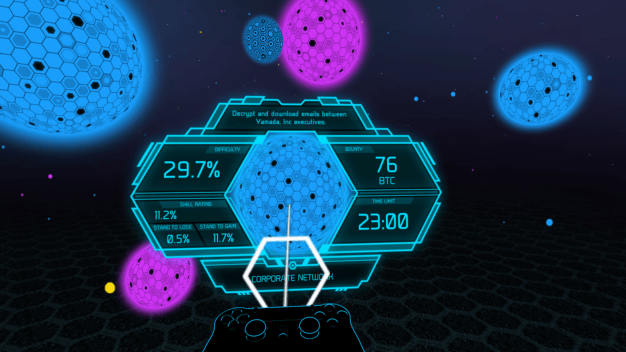 Hack the net at your own pace.

Yes, this is the bit that I was leaving till last. Every hack is timed, When you start hacking a network you’ll see a clock which floats at the top and bottom of the screen begin to tick downwards. If you’re spending time hacking nodes for cash, you’re losing it on your over all objective. If you don’t manage to complete the job before that clock hits zero, you’ve been caught by the system’s security and you fail.

This would appear to be the closest thing in Darknet to a game over but if this occurs you just lose some of your skill rating and you won’t get paid. There isn’t a definitive, “you’ve had it, please go back to where you died and don’t do that again,” moment in this game. I quite like this because it makes every job feel like something individual to everything else. When you begin the game your missions are timed to around 35 minutes which is loads of time but I’m at a stage now where I’m being timed to about 18 minutes and believe me, every second counts. 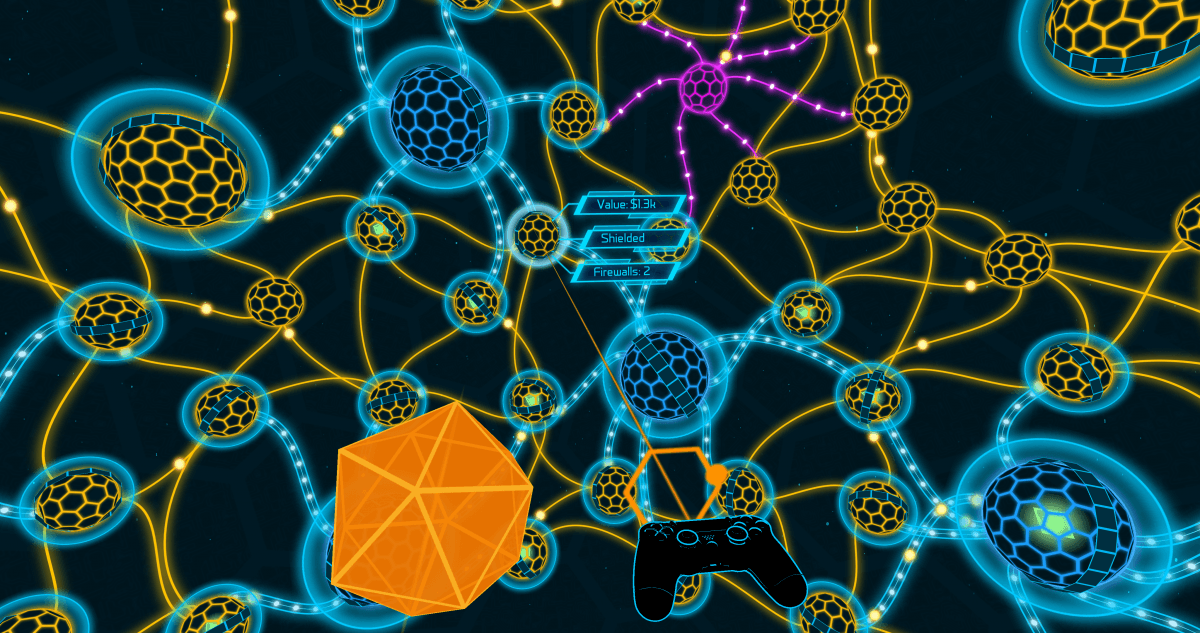 As a bit of a side note getting paid in bitcoin isn’t the same as money you steal while you’re performing your hacks. You don’t get to keep the money that you’re robbing on the job as it’s digital and traceable, that’s just for buying software while hacking. Bit coin is the money you get paid for completing jobs and you use this to buy upgrades. These upgrades are initially things like more starting cash but as you get further down your upgrade tree you need these to further the game. Your upgrades give you access to the dark web and beyond. As a bit of friendly advice, get some practice in on the surface web before choosing to go deeper or you’re going to get a nasty shock when you move on. The game actually gives you a similar warning but being a gamer I know how gamers think. So no, you can’t just do it and yes, the game will eat you.

The only negative is what I’m calling floating controller syndrome. This is where your controller gets a mind of it’s own and floats off pointing in random directions. This is not a bi-product of the title, rather than something that seems to happen sometimes with PSVR as it’s not the first time I’ve experienced it. In terms of the game it’s really frustrating because it makes control impossible and you’re being timed. A quick reset of the software will fix this so don’t let it put you off playing, it’s just a friendly warning on my behalf. 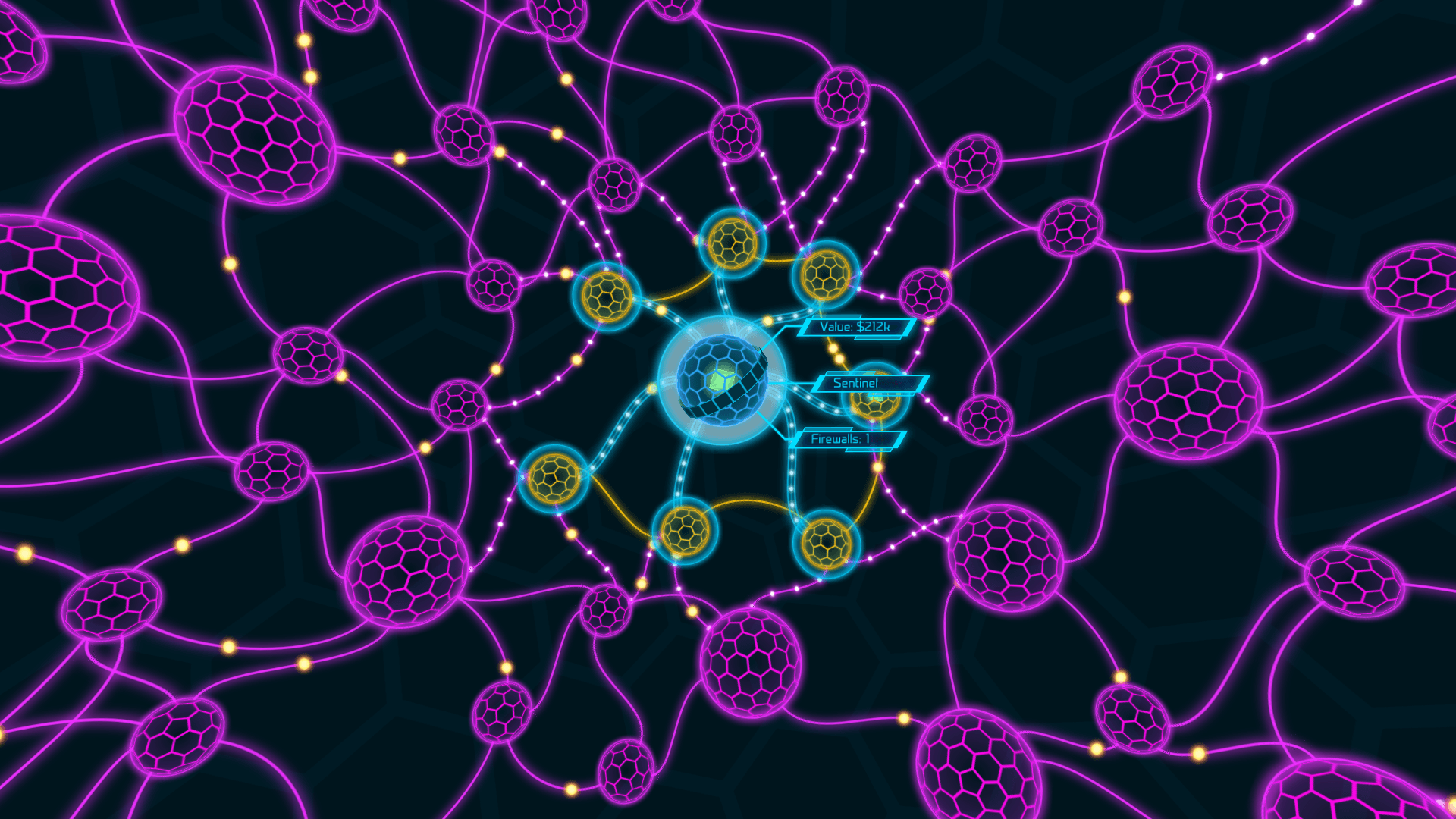 All in all I love this game. This is the first VR game in my library that I’ll deliberately put down something triple A rated to pick up. I can see myself playing this again and again for a very long time and if you happen to have a PSVR I’d urge you to grab a copy, especially as this is one of the more inexpensive titles on PSN. If you like puzzlers then this really is a must have. With all that being said, where’s my helmet? I’ve got corporations to upset!

Hacking has never been so much fun.

Immersive and fun. This is a must have for any puzzle addicts out there and a welcome addition to the PSVR library.