Tank Warfare: Tunisia 1943 is the latest in a long line of tank strategy games to emerge from the factories of Ukrainian game developer Graviteam. Depicting genuine historical conflicts on the Eastern Front during World War II, the latest title explores some of the lesser-known battles that were fought between Allied and Axis forces in the Tunisia campaign. Boasting complex AI, technically accurate damage mechanics, and immense historical detail, let’s see if this 75mm monstrosity hits its mark.

Before I start, I should disclaim that I am entirely unacquainted with military strategy, military history, and military technical terminology. As such, I’m just going to assume that Tank Warfare: Tunisia 1943 is as intricately realistic as it seems, and review the game based on my experiences as an occasional RTS gamer. But as an occasional RTS gamer, I can confidently tell you that straight out of the gates, it’s clear that Tank Warfare: Tunisia 1943 is not for the faint or impatient of heart.

The game is split into two halves: on the one hand, there’s the classic, real-time battles, and on the other, the strategic “operations” mode that does away with the fancy graphics to focus on pure, unadulterated strategy. I stuck mostly with the former, because I’m both faint and impatient of heart, and still found that – as many other Steam reviews will tell you – this game boasts a dauntingly steep learning curve. Sure, the basic principles are there – select a unit, tell them what to do, watch from a top-down omniscient vantage point in joy – but otherwise this is a terrifying, complex labyrinth of a game. 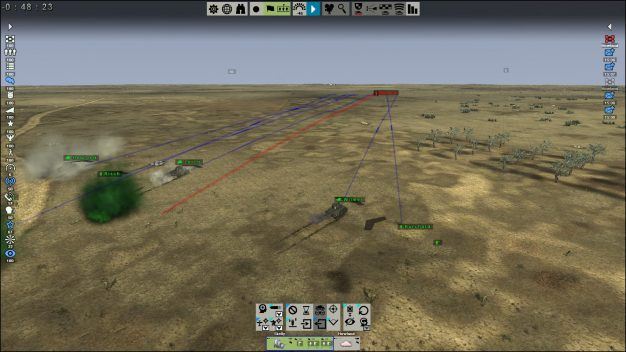 For this reason, Tank Warfare: Tunisia 1943 is a game designed with the most hardcore strategists in mind. The realism does not stop at historical accuracy: aside from keeping an eye on fuel and ammunition reserves, you’ll also have to consider things like wind direction, potential terrain fluctuations, inclement weather, where you’re going to lay your radio cables, visibility impediments, and whether your troops are buoyed by your camaraderie and generally jolly leadership style. And that’s just the tip of the iceberg. Now, I balked at the prospect of having to juggle so many responsibilities at once, but for those of you who enjoy micro-managing your platoon down to the individual, this is the game for you. 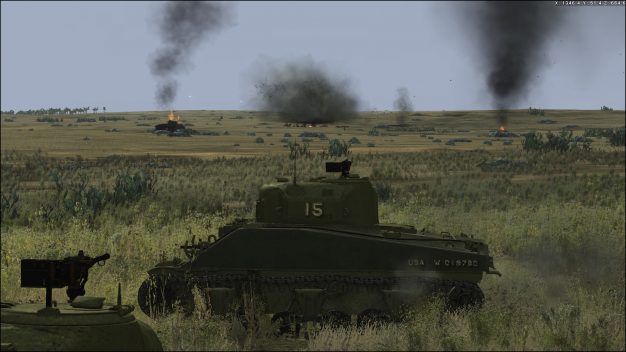 Of course, the realism contributes to Tank Warfare: Tunisia 1943‘s best bits as much as it does its most terrifying. The physics are extraordinary, as you’d expect – tank shells alone are influenced by their environments in more ways than you’d think possible. The damage functions are also impeccable, relying on complex systems of impact hierarchy as opposed to the ever-trusty health bar. And of course, let’s not forget the AI, who are talented enough to run around screaming in agony when set alight, or make stellar use of nonexistent shrub cover, and yet are utterly unable to navigate an empty field in a tank without twitching confusedly. 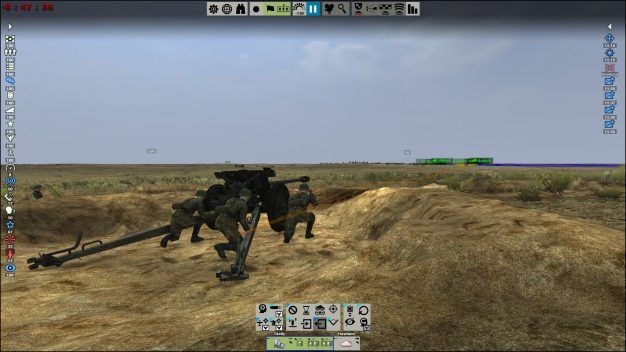 Confusion is a bit of a running theme, as it goes, and not always in the humorous way. Tank Warfare: Tunisia 1943 is unforgivably messy: between the Comic Sans font and the Microsoft Word 2001 menu design, there is not one hint that this is a game designed and published in 2017. The written explanations – and this is a pet peeve, something that not even titanic developers like DICE have managed to avoid – are poor, often grammatically unsound or otherwise unhelpful. Menu icons that make use of actual photographs from World War II unfortunately only contribute to the mounting impression that this game has drawn inspiration from a 10-year-old’s history project. And I know, I shouldn’t be judging a book by its cover, but come on: UI design is the easy bit, surely, so why be lax about it?

Luckily, a significant amount more care and attention has gone into the unit design. The assorted vehicles are dutifully real-to-life, as are the infantrymen and other soldiers who scurry along beside them – granted, the animations are somewhat clunky, but this is an RTS game. Detail is rarely relevant when you’re watching the battle unfold from the clouds above. As a neat additional feature, every tank, truck, soldier, stationary weapon, and bullet has its own in-game ‘wiki’ page, so you can immerse yourself fully in the warfare of the period; this also happens to be a nice way for Graviteam to showcase their unit designs, and is the most aesthetically well-made UI on the game. 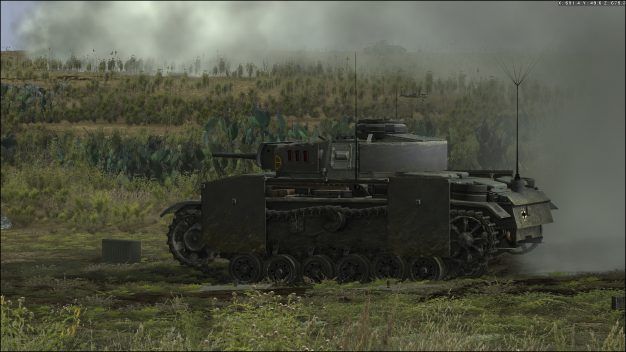 Trying to critique Tank Warfare: Tunisia 1943 on its level design is a difficult thing. Just like the tactics, units, and narratives, the game boasts environments that have been constructed using topographical information from all the relevant regions of Tunisia. For immersive purposes, this is a great idea – if you want realism, a FPS-style condensed arena is probably more hindrance than help; in terms of aesthetics and overall gameplay appeal, though, the realistic environments are a monumental shot in the foot. This is because these environments are about 80% flat shrub-land, with the remaining 20% belonging to the occasional small settlement or architectural landmark (which, to be fair, are appropriately quaint). Not only is this a little tiresome to look at, it also reveals the texture tiling caused by filling such a large area with little more than one design, and though the landscape is peppered with shrubbery and the occasional pile of boulders the overall effect is less than appealing. 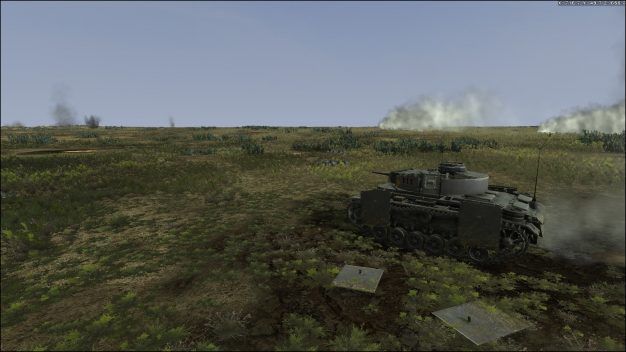 Now, I’d let this slide, if not for the fact that RTS games categorically require you to observe the entire battlefield from a distance. This makes everything I’ve just mentioned crystal clear, and has the unfortunate side-effect of diminishing your units to mere specks on the horizon; again, this wouldn’t be an issue, but the size of the environments and generally long-range style of tank conflict means you’ll be zooming out an awful lot. That said, there is a neat feature that allows you attach the camera to a unit in a third-person view, which does bring out the best of Tank Warfare: Tunisia 1943‘s graphics. 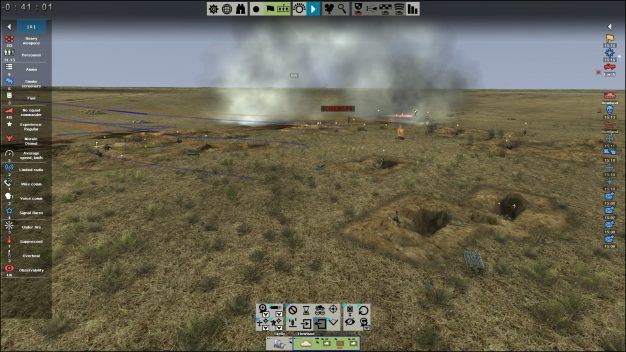 Tank Warfare: Tunisia 1943 is a game of extremes. The realism is extremely meticulous, and the history is extremely accurate; unfortunately, the UI design is extremely rudimentary, and the graphics, well, at best they’re extremely meh. That said, the gameplay is solid, inasmuch as it completely and accurately mimics the military conflicts on which it is based. If all you’re after is a hardcore (and I mean hardcore) military strategy simulator, then look no further. Otherwise, move along soldier.

A Panzerschreck to the face

Tank Warfare: Tunisia 1943 is certainly a lesson in military strategy. But a mass of historical accuracy and technical detail cannot quite mask the uninspiring level design, over-cluttered and rudimentary UI, and daunting learning curve. If you want to see Graviteam at their best, look toward their Mius-Front version of this Tank Warfare game – it’s just as realistic, but also quite pretty.