Remember when shooters used health packs and armor pickups? When the only narrative you needed in your FPS amounted to “shoot bad guys?” I could easily slap on a, “only 90’s kids remember” to those sentiments, and you could share them on Facebook for some cheap likes; but behind every cry of nostalgia there is a developer figuring out a way to capitalize. We’ve already seen Coca-Cola bring back Surge, Will Smith and DJ Jazzy Jeff on tour again, and endless reboots of classic films, but where are we left standing when it comes to gaming, and more specifically, the feel of those FPS juggernauts of yesteryear? Pixel Titans and Devolver Digital’s latest effort with the Kickstarter-backed STRAFE sets out to show that the classic aesthetics of all-time greats such as Quake and DOOM weren’t left to the same fate as so many Tamagotchi pets. 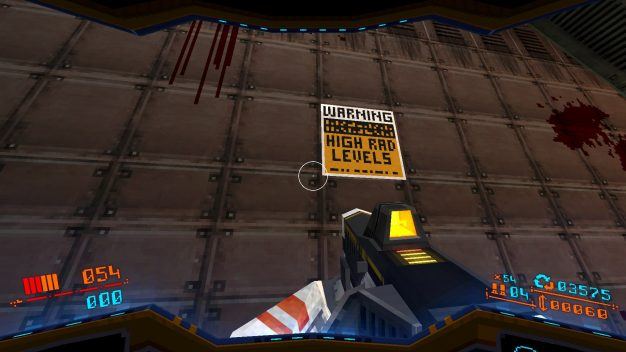 STRAFE is a roguelike nostalgia trip for fans of shooters in the 90’s. The game was marketed as the best looking game from 1996, and honestly that may be the most apt description. It’s low-res and has chunky polygons, but it was very much intentional for the aesthetic direction and the vibe STRAFE was trying to sell. On this throwback level, the game works as intended. The graphics take you back to the 90’s, the corny FMV gets you nostalgic, and the hidden secrets and references to other classic shooters get your nerd synapses fired up. This is where STRAFE finds its success.

However, a different story unfolds as you actually sit down to play STRAFE. You will quickly realize within a few attempts that the pull of nostalgia weakens and STRAFE becomes a tale of two tones. Between the marketing hype videos, the cheesy tutorial, and the guitar shredding music, the developers want you to believe STRAFE is an all-out run and gun gore fest, but that’s not the case at all. Unless you are very skilled and very lucky with the procedural generation, you will find that you won’t be able to get past the first level with that approach. I found most of my best runs in the game came from a slow, methodical approach that saw me drawing enemy attention and funneling them to a hallway to pick them off efficiently while preserving the frail protagonist’s meager amounts of health and tissue paper armor, as health and armor pickups were quite rare. 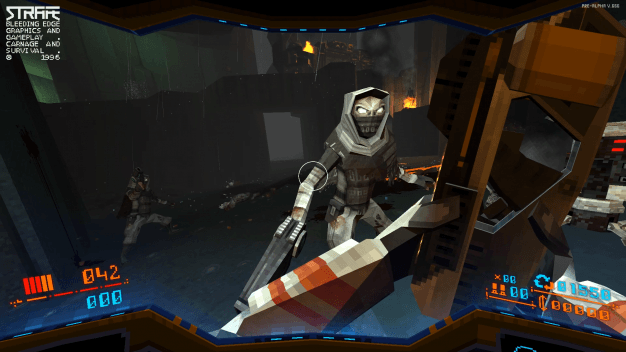 The roguelike trappings of STRAFE work against the experience in a pretty significant way. While the basic mechanics of running, jumping, and shooting are all serviceable, the enemies and level design can feel way too random and cheap from play to play. Some runs you’ll get a couple of health packs, easy rooms to funnel enemies, and a solid gun upgrade. Other times you’ll get a gun upgrade that makes your gun worse, no health, and enemies will swarm you from all sides.

I walked away from every death in the game without feeling any kind of progression that roguelikes traditionally instill upon a fail state. For example, in a game like Don’t Starve I would feel that I knew how to approach enemies and how to make better use of my items after my deaths. In STRAFE it would just feel like I had a bad roll of the dice and had to wish for better luck next time. For a game with 4 stages that contain 3 levels each, it’s asking a lot to get 12 good dice rolls in a row. 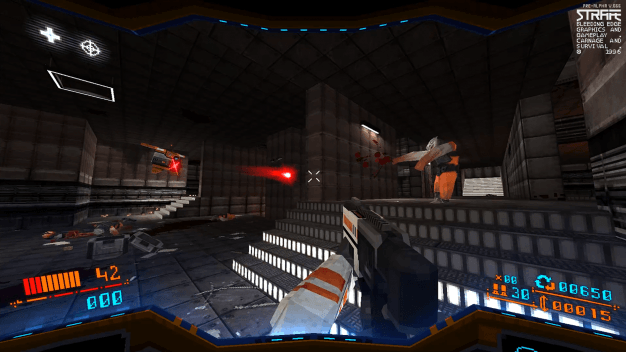 In what seemed to be an attempt to negate the dice roll, luck-of-the-draw feeling of STRAFE’s levels, there are usually machines in each level that offer armor packs for in-game scrap pickups. The negative to this is that the armor pickups are very small for the amount of scrap you trade in for them. For example, I would accumulate about 7,500 pieces of scrap in about 2 levels and a 50% armor pickup costs 6,000 scrap. Now keep in mind that the armor in this game falls away quickly with minimal hits, so it becomes a question of why the player should bother with it at all. There desperately needs to be a better trade off for in-game currency and in-game items, because as it stands now STRAFE feels like it is making a tough game much harder by putting a chokehold on health and armor.

STRAFE also contains a secondary mode called MurderZone, which operates as a standard horde mode. You pick a weapon and fight through rooms of enemies while a counter keeps track of the gallons of blood spilled. Upon death your blood counter pools up and unlocks new perks to use in future runs of MurderZone, such as the ability to carry a second gun. While this would be a decent mode, it still didn’t quite have that run and gun feel of the games that STRAFE pulls inspiration from; instead opting to keep the gameplay that is in the main game which rewards a slow, methodical approach. So you don’t feel like a Doomguy-eqsue badass, but more like a scared to death person running in circles trying to pick off the horde of enemies hot on your tail. To make matters worse, in my copy of the game, I consistently ran into glitches after the first room where my character would fall through the map and enemies would literally float in space behind invisible walls. I’m not 100% certain why this happened, but it was always after I finished the first room and tried to move to another. 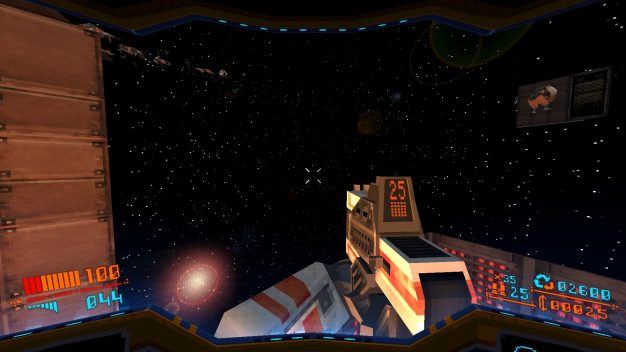 STRAFE provides a dose of nostalgia that can taste quite sweet in short bursts, but too much STRAFE in one sitting can easily flip that nostalgia to nausea. The game pulls heavily from old classics and provides an aesthetic that would seem right at home with them, but uses modern gameplay design to change the core experience in a wholly unsatisfying way. If you’re a fan of the look 90’s shooters had while also wishing they were slower and more plodding in pace, then STRAFE is the game for you. If you don’t fall into this more niche demographic, STRAFE is a hard sell and I wouldn’t blame anybody for passing on the experience.

Decades Late to the Party

STRAFE is a decent shooter that hits some sweet, sweet nostalgic notes. However the dependence on the roguelike procedural generation puts a damper on the experience.