Imagine a cleaner, slicker Hotline Miami. Imagine Alien Breed with less guns and gorilla monsters and more business men and sticks. Mr. Shifty is everything you would want from a fast-paced infiltration, top down combat game. With every weighty punch and door crashing kick, the eponymous Mr Shifty will have you feeling like a boss and looking like one too.

Mr. Shifty has been enlisted to infiltrate a highly secured building guarding a plutonium core. Your task is to see Mr. Shifty through levels of intricately designed enemy placements and the odd platforming puzzle to reach the top of Olympus Tower, where the evil Chairman Stone is working to weaponize your precious core. What makes Mr. Shifty so incredibly satisfying however, is the speed of gameplay.

It’s rare that you come across a beat ’em up with just the right play tempo. While there’s still a definite need for quick reflexes and a cool head when being ambushed, there is still time to make informed decisions about where to dart to next. This is partly due to the teleportation mechanic that has been ingeniously implemented. Mr. Shifty can dart through walls to evade bullets and angry suits, leading to some seriously gratifying moments of confused enemies. Taking one raging businessman out before slipping back into the room to sneak on the cavalry emerging from behind will feel better and better with every practiced maneuver.

You’re not invincible, however. In fact, you are far from it. All it takes is one shot to send you to the floor and cue the sepia slow motion. While this would prove frustrating in other games, it is testament to the attention to design detail that this mechanic actually works incredibly well here. Mr. Shifty is primarily built on speed and quick thinking, with the teleportation ability giving you access to safer rooms before re-approaching your threat. If you’re faced with more than three foes, then, it’s a good idea to get the hell out of there and pick them off one by one. Abilities are evenly matched to keep you on your toes and make gameplay suitably frantic.

The thrilling partnership of stealth and action makes every second of combat exciting and unpredictable. However, later on in the game this variation isn’t enough to maintain such a buzz. Sure there are weapon mechanics introduced, but everything you pick up seems to have the same combat effect. To its credit, Mr. Shifty does introduce variation in the form of enemy weapons and powers, chase scenes or laser-induced puzzles, but at the end of the day the default dance of plowing through enemies to reach an elevator wears thin. 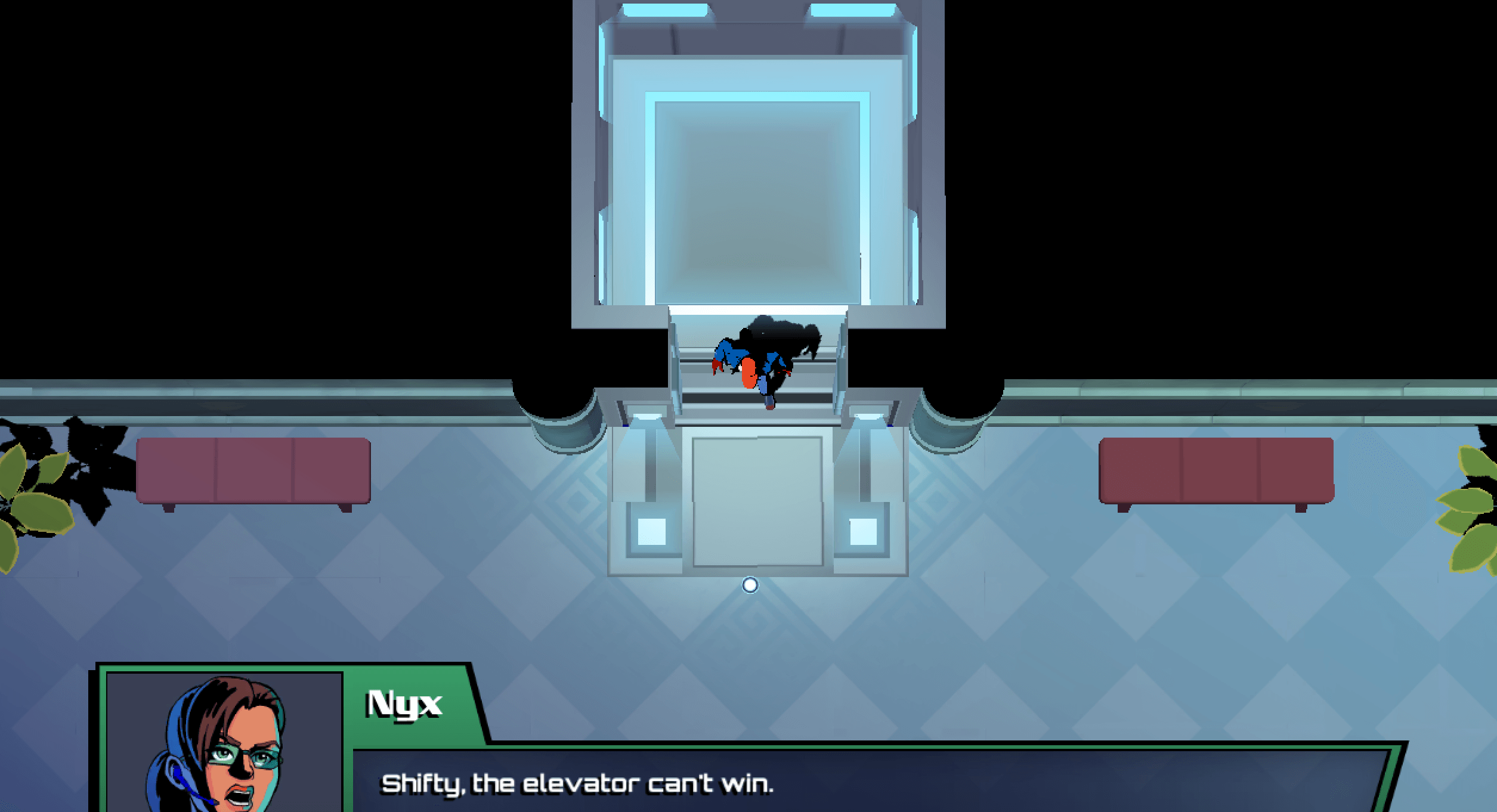 Your aural accompaniment will redeem any placation you feel with later stages of gameplay, however. Driving rhythm and lead guitars combined with laid back drum beats make for a minimalist but bad ass musical style reflective of the bare-bones office spaces you are destroying. There’s a sci-fi feel in its swanging synth lead lines and a complementary elevator soundtrack that brings a smile every time you wait for the next level to load. There’s a science fiction comic book aesthetic here that definitely highlights the inherent silliness at the core of Mr. Shifty.

The story of Mr. Shifty’s shenanigans might take a backseat in your experience. While there’s a lot to be informed of, via a telecoms system connected to your boss, it’s easy to coast through without paying much attention to the overarching story of the game. It’s nothing that special, after all, and there will be no Pulitzer Prizes here. It’s there if you need it, however, and if you prefer to plow through you won’t miss anything major. 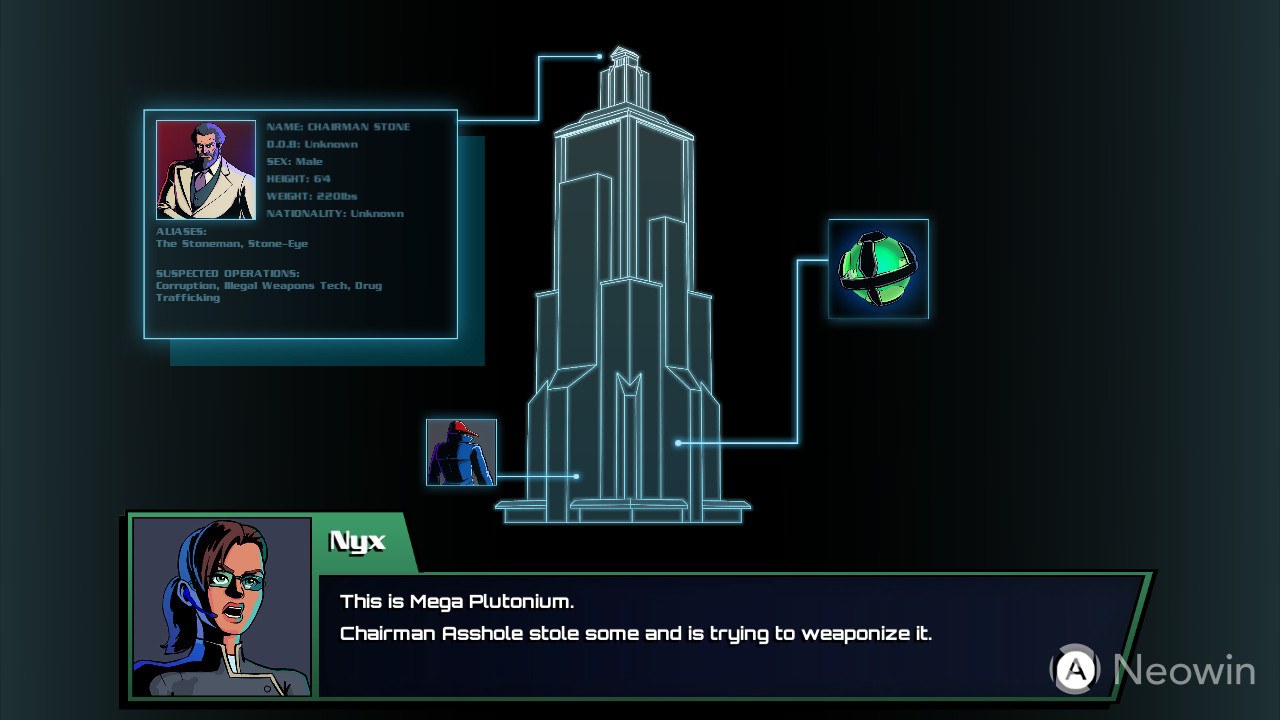 Overall, Mr. Shifty was a fun few hours of punching people to death. It has been optimized for joypad configuration with both PC and Mac, and works brilliantly with an Xbox, Steam, or DS4 controller. Though while using a DS4 I was often shown the indicators for an Xbox configuration, it’s nothing a little built up intuition can’t handle. As a light-hearted and whimsical foray into bad ass-ery, Mr Shifty represents a hallmark in top down design and combat balancing.