Since 2011, Minecraft has been enchanting audiences young and old with its blocky design and  simple, destroy-and-craft purpose. Barring a brief foray into the somewhat similar PC game Cube World, I’ve never really delved into the simple yet expansive realm of block-based crafting games. So, as one might expect, I was going in blind when I played Portal Knights. 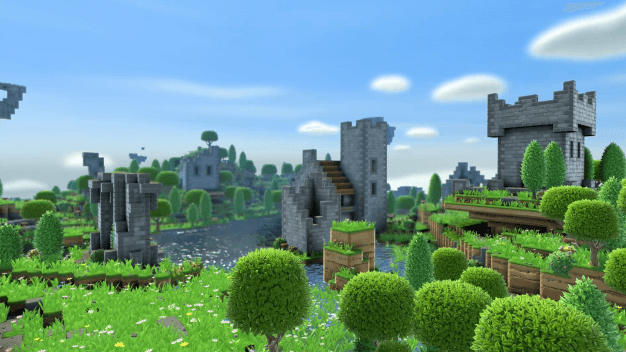 Developed by Keen Games and originally released in early 2016 on Steam, Portal Knights combines exploration and building elements from games like Minecraft and Terraria. Players can craft items such as swords, tools for smashing blocks, pickaxes for mining, and construct and repair buildings, armor and weapons. In Portal Knights, there are also RPG elements such as character customization, classes, leveling up skills, plus crafting items such as potions for health restoration.
There is also an added flavor of exploration and discovery, where players can travel from themed world to themed world through portals, which they can pass through by collecting enough color-coded shards from enemies and the environment to create blocks of that color, which in turn can be used to fill the portal gate present in each world. There are two ways to tackle Portal Knights. The game can be played as a single player campaign or with friends. Online play is supported with up to four players simultaneously in the same world, but couch co-op is also available in horizontal splitscreen format. 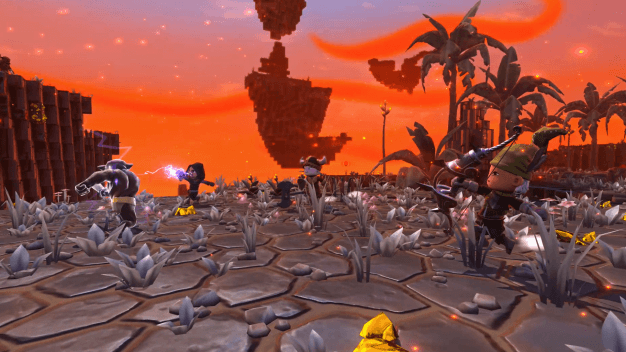 I was actually surprised by the level of customization you can put into your characters. There’s a wealth of hair styles and colors, facial expressions, eye colors and skin colors to choose from. There’s even a couple of voice choices, for what it’s worth. There are only three classes available: warrior, mage, and ranger, but I’ll be the first to suggest that you don’t really need specific classes too much games like this.
It’s merely the difference between being able to take down a flying enemy easily with magic and arrows or having to jump and smack it with your sword. There are also multiple save slots, so you can use a variety of characters that you’ve created for different purposes who have different skills and items at their disposal. And when you’ve finished creating your character, there’s a small island customization menu where you can choose how large you want the island to be, and also give it a name so you can easily access it next time. 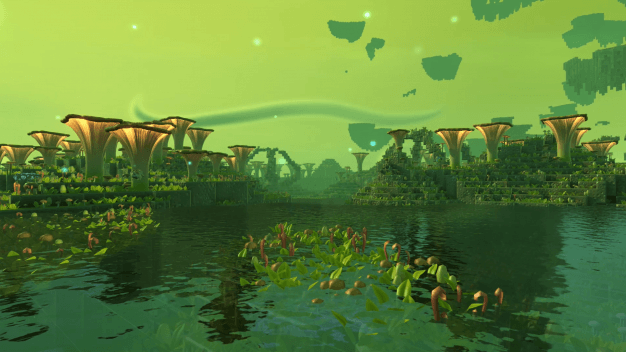 One of the benefits of sharing room and board with another person is that you always have a “willing” participant for co-op gaming. Split screen, couch co-op is a bit of a novelty these days, so I was very keen to try it out. Unfortunately, it’s a bit of a bust. Despite our very large TV, and even considering my boyfriend’s much sharper vision, it was extremely hard to read anything on the crafting menu or objectives list on the HUD. Assuming you don’t want to read anything, there’s nothing wrong with the co-op gameplay. It doesn’t stutter, but I wouldn’t expect it to with offline gameplay, it’s easy to set up, and overall it works just fine. However, I like to read things, so couch co-op will remain as an unfortunate case of poor execution in my eyes.
Despite my disappointment with the multiplayer gameplay, I still liked what I was able to see in split screen. The aesthetics of the game are really bright, soft, and cute. It’s a thousand times more appealing to look at than Minecraft, although I’m sure hardcore fans of that title would argue that the super blocky nature of the art makes it easier to create things which resemble other, more complex things. The colors, particularly in the grass and trees, are really vibrant and pleasant to look at. Even at night, it’s easy to see the variety in shades and colors available in the environment. Later worlds are the same, with strong reds and oranges for desert lands and deep, shiny reds for rubies buried in the cubey earth. 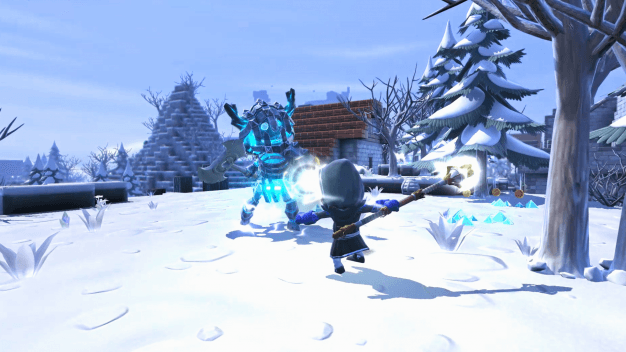 Gameplay is pretty simple. The objectives list tells you how to jump, whack things with your sword and how to lock on. I found the fighting a little clunky at times, where the game would lock onto things even when I didn’t want it to. I also feel the game could benefit from a dodge roll (and if there is, I didn’t figure out how to do it) because I was getting locked on and smacked by enemies with no real way to defend myself. I imagine one can build a shield for protection to counteract this issue.

Also, at one point in the game I crafted a torch. I was then hit by an enemy while carrying the torch and it was knocked to the floor. I couldn’t figure out any way to pick it up, so I think the inclusion of a way to pick up things you’ve dropped would be a positive improvement for the game. I think my torch is still sitting in the middle of that dark cave, taunting me. 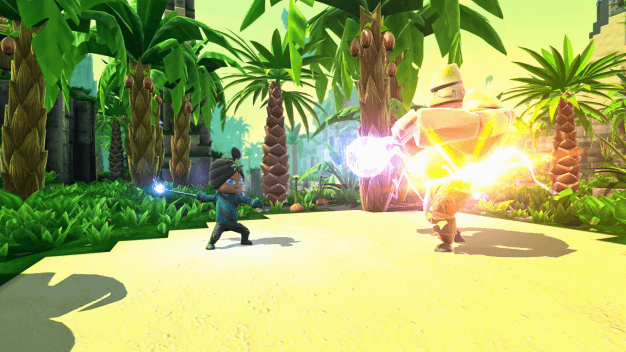 I had a good time smacking things into cubes and materials in other shapes, although the monotonous environment-bullying of these games for the sake of crafting and building (only to repeat the process) gives me no real joy. I also accidentally smacked my way through the floor of an old farmhouse and had to burrow my way out, which was a lengthy process. Sometimes when you’re being surrounded by blocks you’ve broken off various parts of the environment, it’s really hard to tell what you’re actually attacking. However, I was choosing not to play in first-person mode, which may have made it harder to tell what I was breaking. Thankfully, the crafting menu was easy to use, and equipping items and armor was super easy. The interface is pleasing to look at, not at all cluttered, and it’s easy to see what you need for crafting new items.
I haven’t got a lot to say about the music  because most of the time it wasn’t actually present, although the ambient sounds typically were. Issues of this kind have been highlighted by the developer and are expected to be fixed in a Day 1 patch. In particular, there was no music in the background of the main game screen when you load the game, which could be intentional, although it seems like an odd choice. 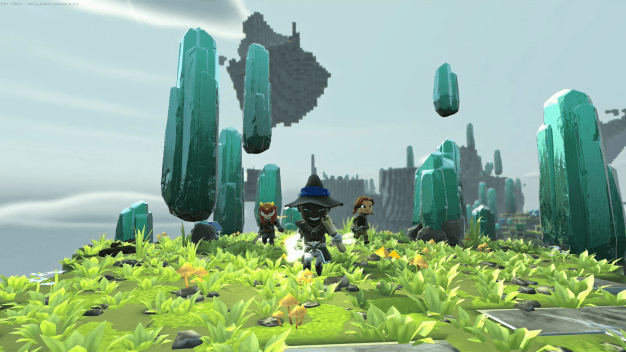 I really am a complete novice when it comes to the world of crafting-building games of this kind, and I get little joy from the repetitive nature of such games. That said, if I was going to pick up a title in this genre, I’d absolutely pick Portal Knights over Terraria, and especially over Minecraft. For one, the game is really aesthetically pleasing, and customizing your own character makes it feel way more interesting. I don’t normally like to base my impressions of a game purely on the graphics, but I find Minecraft’s appearance to be really unappealing.
It also helps that Portal Knights offers the tiniest hint of a storyline and different worlds to explore and a wide variety of new materials to discover as you make your way through new portals. Even though the fighting is clunky, it’s easy enough to push through in pursuit of the true goal: breaking things and turning them into new things. However, given the serious issues with couch co-op, I’d strongly suggest going it alone unless you plan to work together online, rather than on the splitscreen. 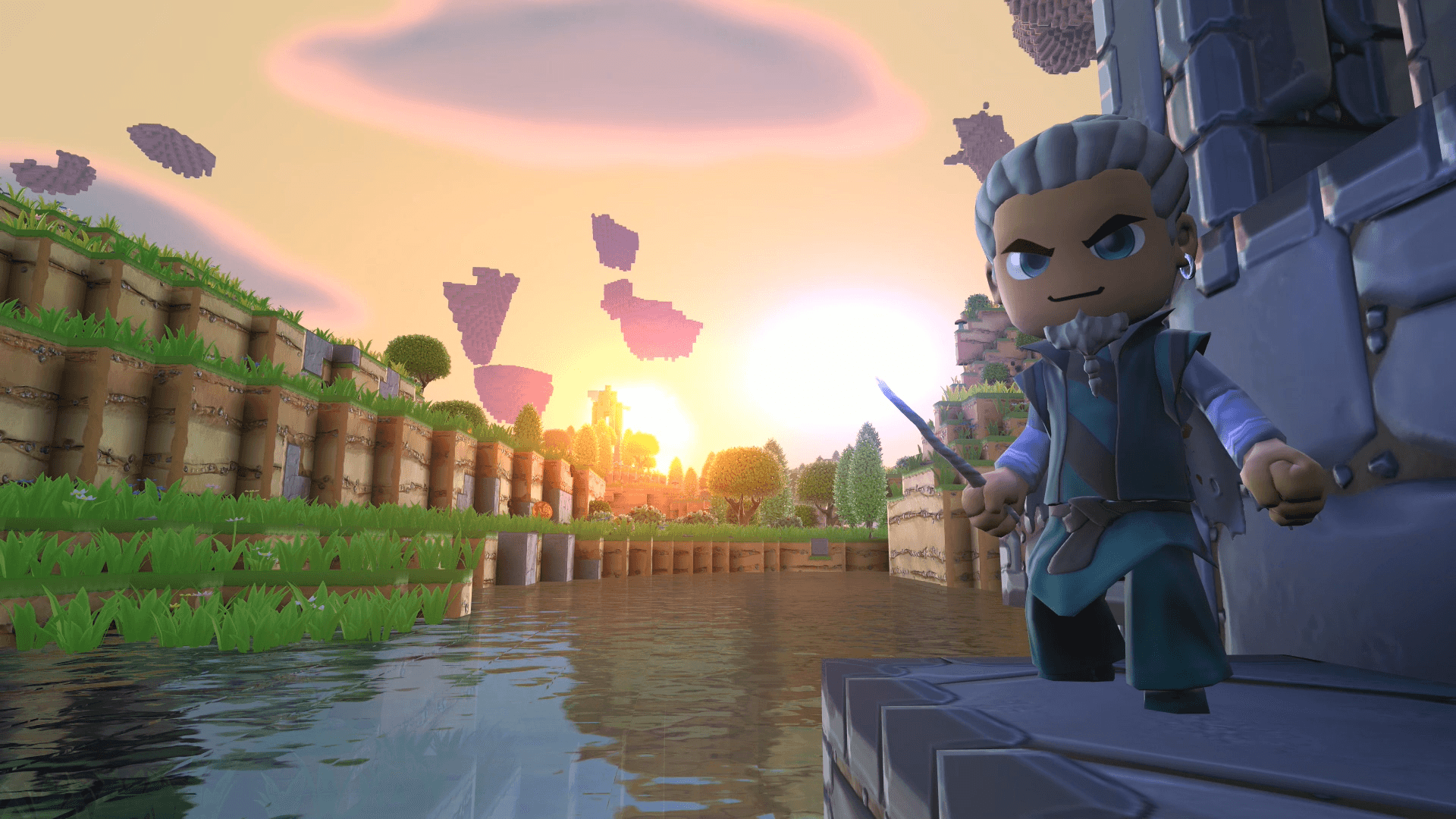 I think the appeal of Portal Knights over something like Minecraft is that it gives you a list of completely optional objectives to complete. Sometimes being set loose in a world with little character and infinite creative opportunities can be overwhelming, even for the most creative of people. If you’re thinking of taking the plunge into crafting games and aren’t sure where to start, Portal Knights offers less of a blank canvas than other games in the genre, and that’s a good thing.

Knocking on wood (and everything else)

If you’re a complete novice in the crafting genre of games, but you like the concept or are just a bit curious, Portal Knights will be perfect for you, but you alone.