There’s something immensely satisfying about sitting down, constructing a base, building a whopping big army and then using it to decimate someone else whose doing exactly the same thing.  No I’m not furthering my plans for world domination. I’ve been indulging in a lovely spot of real-time strategy.

This is a genre that I’ve loved going right back to the early Command and Conquer days. This is back before pay-walls and waiting six million hours for one unit to strap up his boots. Back when you bought a game and actually got as much fun out of it in one go as you could, barring of course you could stay awake and not get told by your mother that you had something far less interesting to do.

I have to say that one of my favorite franchises has been the Warhammer 40,000: Dawn of War series. Whether you know a lot, or nothing at all, about Games Workshop’s table-top goliath, Warhammer 40K has a brilliantly diverse, well written and massively deep library of lore surrounding it. With so many races, (the majority of which hate each other,) and so many interconnected plot lines laced through, with more being added all the time this is a perfect backdrop for a video game series. 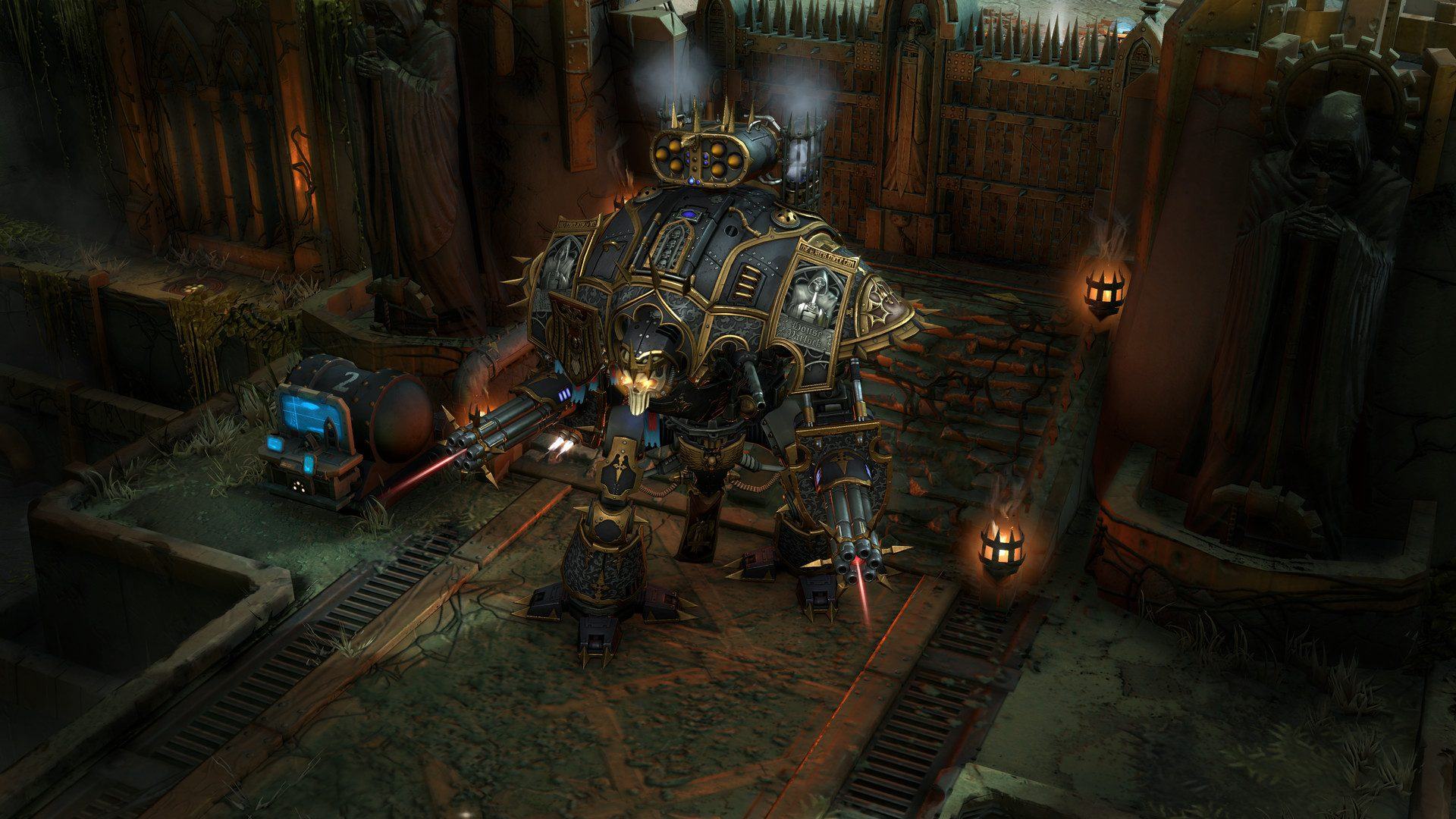 Dawn of War I, II and III are actually all brilliant games. While each these offers a different story they all go along very similar themes game-play wise. Personally Dawn of War: Soulstorm is my favourite because it zooms out to a broader conflict and adds a Risk-esque element of play that I find really appealing. This game gives each race has it’s own story line where with the other three the stories of the different races that you play are inter-connected, which is fine of course, it’s just a different way of telling the tale.

The intriguing plot of Warhammer 40,000: Dawn of War III centers around the reappearance of The Wandering World. This entire planet remains lost in the warp for hundreds of years, only appearing in real-space at various intervals. The planet is home to The Spear of Khane the Eldar war god. This is obviously a powerfully magical artifact and what happens when different factions want to get their hands on the same weapon? Death and destruction. Lots of it. 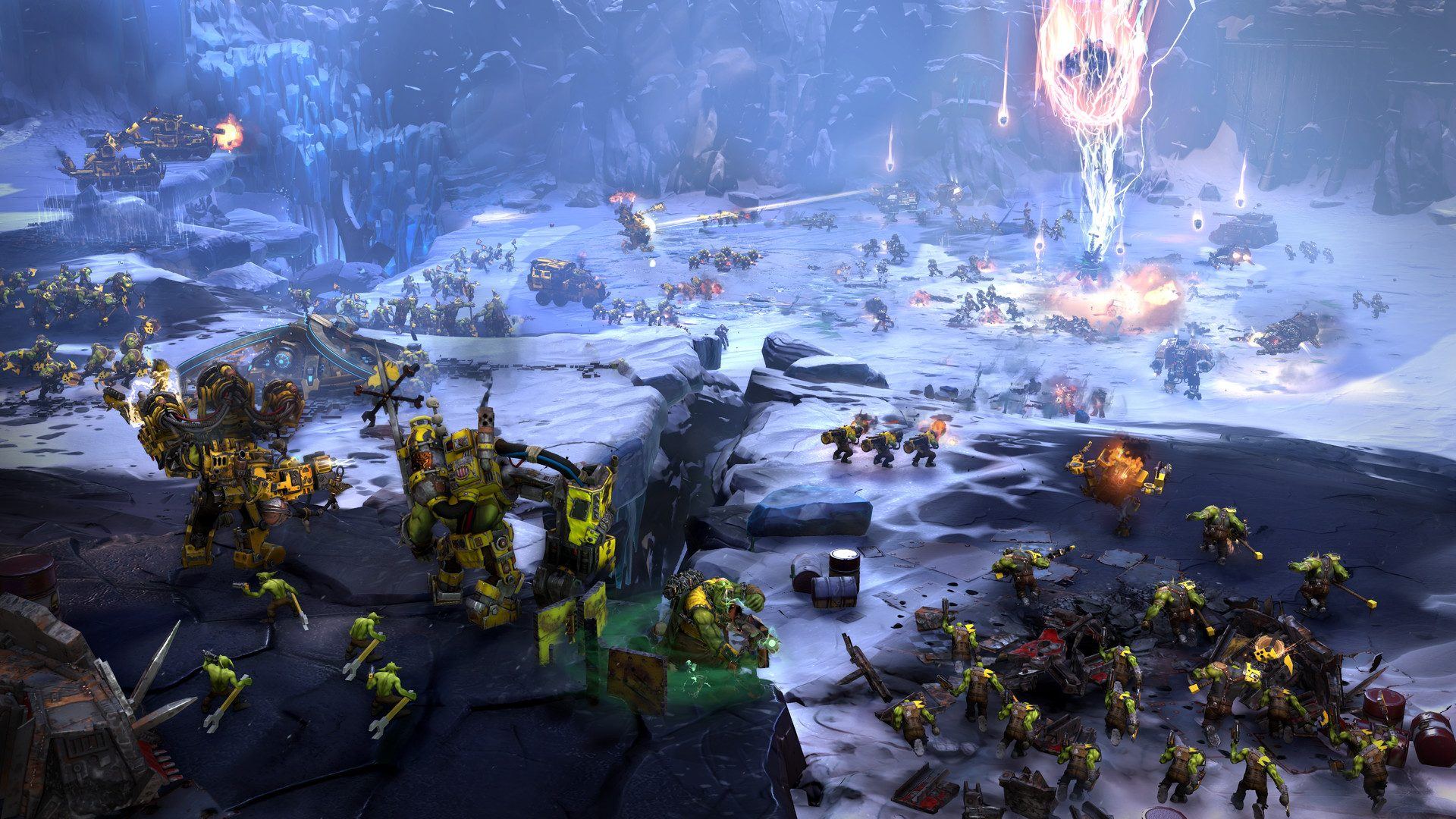 The single player campaign follows the story of three factions each of whom have their eyes on the spear. The Blood Ravens, a chapter of human super-soldiers led by Gabriel Angelos are out to destroy the spear believing it tainted and far too corrupt for anybody to wield safely. The Eldar, led by Farseer Macha, are sent to take the artifact as their own by a powerful warlord who wishes to use it to re-unite the fractured Eldar race. Then you have the Orcs. Gorgutz is leading a massive Waagh! (basically a greenskin kill-fest) in the area and when Orcs smell power they want it, even if they’re not smart enough to know exactly how dangerous that power is. I’m not going to ruin the story but the three plot lines begin to blur and inter-connect and there are other insidious forces at work. Basically it’s really good and you want to keep playing just to see what twists are coming next.

S0mething that I really like about Dawn of War III is the elites. You select these powerful units at the beginning of a mission from where you can also equip your force with doctrines. Doctrines are basically bonuses that you unlock or buy with skulls (I’ll explain this in a minute,) they might make certain units faster or give certain buildings abilities. They basically allow you to tailor your play-style to fit your own needs. This adds another dimension to play and makes the game a lot more customisable. This being said I’m digressing. Elite units are completely individual in the way they play. Some are heavy hitting, slow, reliable tanks, others are speedy killing machines that are a little bit more squishy. As with doctrines choosing the right characters for the battle can mean the difference between a win or a loss and again add that extra level of personalisation. 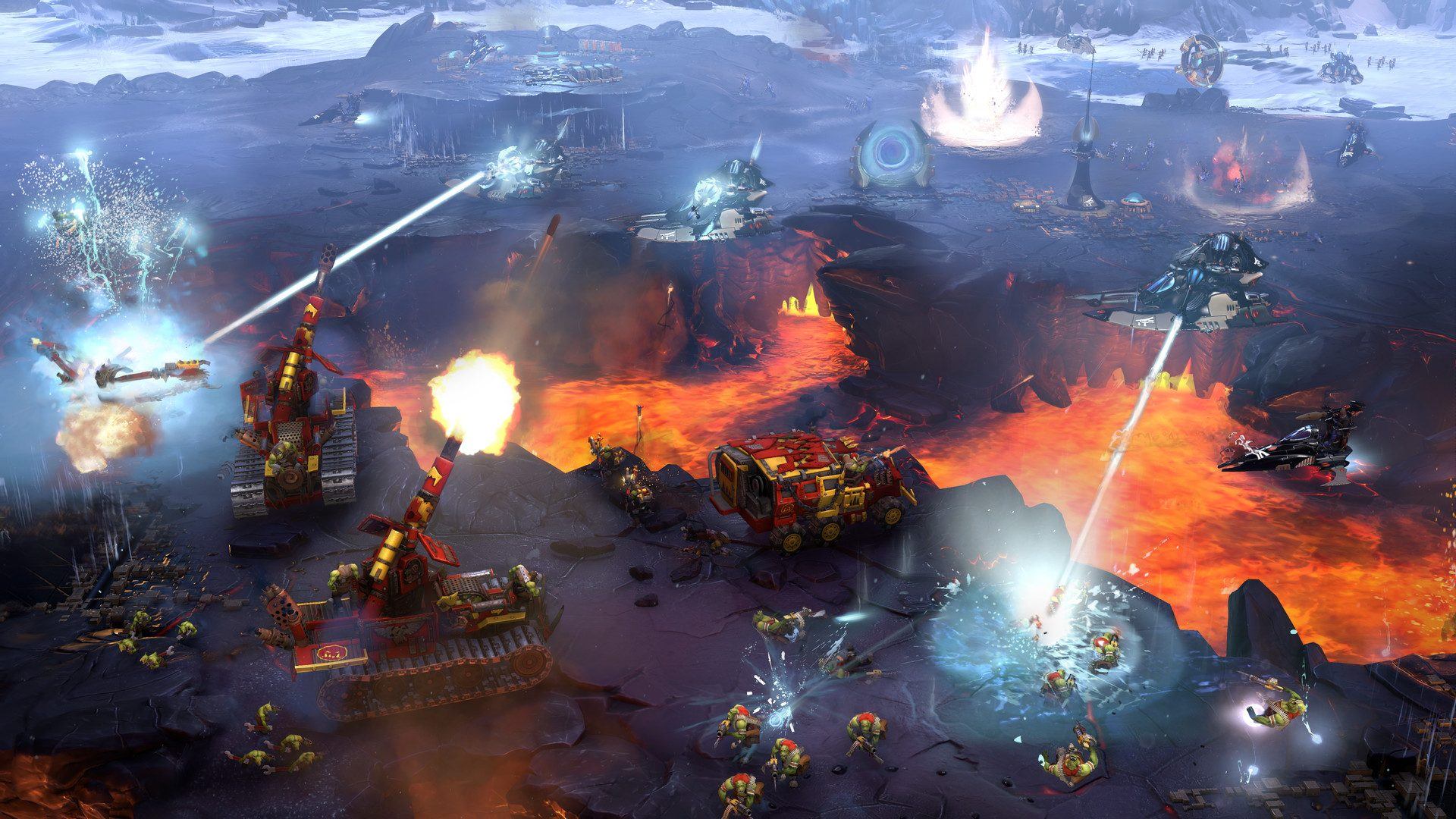 Skulls are an out of level currency that you earn by simply playing the game. As I’ve just mentioned you spend these on Elites and Doctrines. I’m usually wary the minute I see another type of currency in any game as things start smelling strangely of micro-transactions. This isn’t the case here, it’s just to allow you to unlock things at your own pace and to your own strategic tastes. It stops everything being too stream-lined and you using what appears to be the next most powerful unit all the time as you progress. This makes sense so it’s actually a help rather than a hinderance.

The three races play very differently to each other. This isn’t just a matter of a few different buildings that create different units. The Marines are the most standard fayre. They have research buildings and upgrade depending on resources that you spend. Orcs use scrap to upgrade and you need to build Waagh! Towers to get your more powerful units and buildings. Eldar are possibly the most brittle of the three races relying more on speed that a slow implacable assault. They have the bonus of allowing you to teleport your buildings. If your base is in danger you can literally pick it up and drop it somewhere else. They also use Webway Gates alowing them to move units across large areas of map instantly. 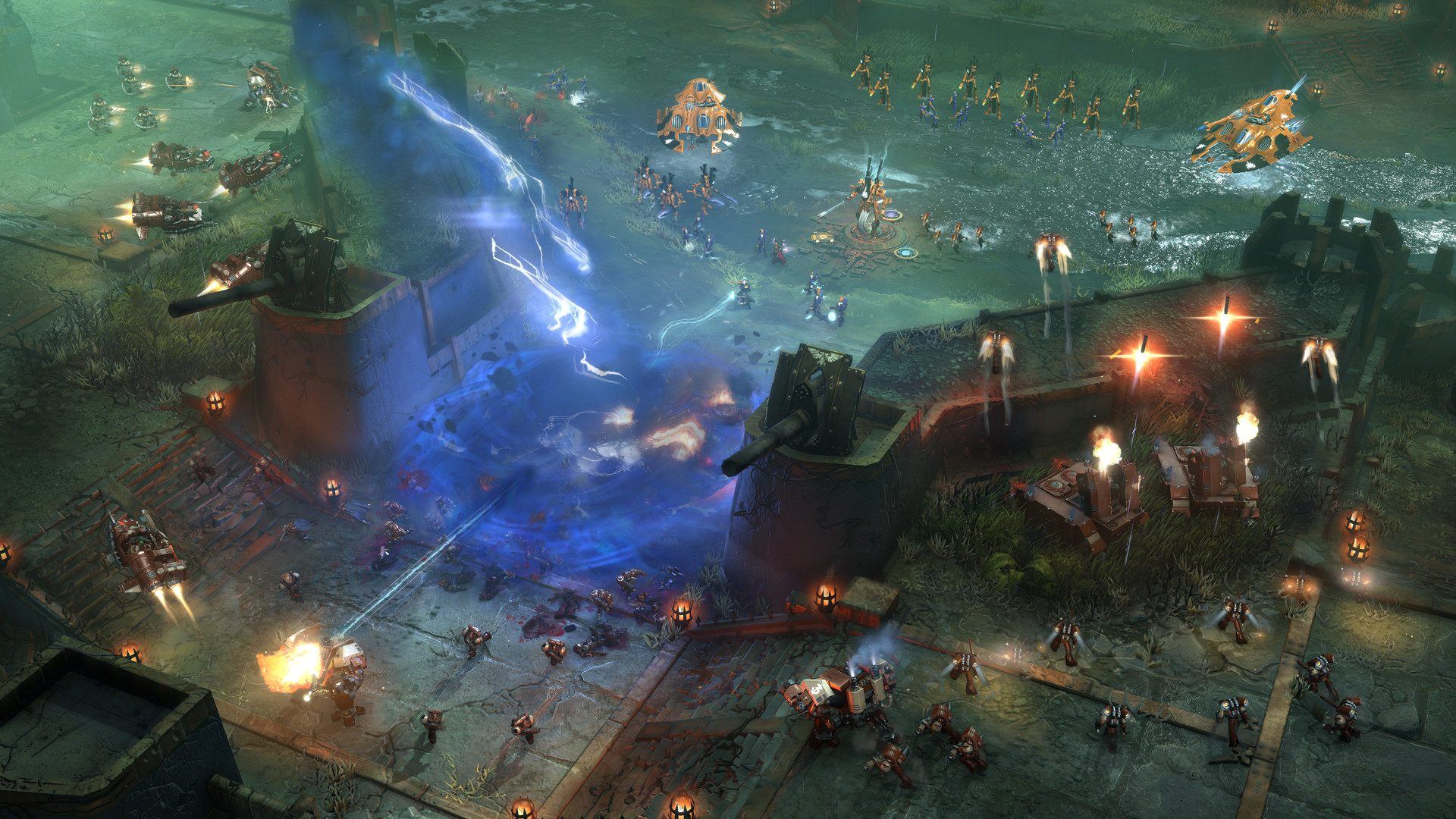 The single-player campaign gives you very specific goals to meet to progress the story. Multi-player is a bit different in that you have to destroy a core building located at your opponent’s base. You can’t do this until you take our their shield generator and then in turn at least one very powerful turret. I have to admit that the multi-player feels harder than the campaign, even when playing an AI opponent on the easiest difficulty setting. This isn’t a complaint by the way, it’s a challenge, not an insurmountable obstacle.

All in all this is definitely a game that I’d happily recommend to any RTS fan. You don’t have to know all the ins and outs of what’s going on outside the game to enjoy what’s happening. You might get more of a kick out of this title if you’re a Warhammer 40K fan but it’s certainly not a pre-requisit. The graphics are nice, the story is engaging and the difficulty is just right for the type of game that this is. I’m actually going to finish it and start again on the next hardest difficulty. The simple fact that I want to do this means it’s going to be in my library for quite some time and I think might fit very well in yours.

This is a welcome addition to the RTS genre and a superb successor to the other games in the franchise. This is a gem that’s definitely worth a play if you love a bit of strategy.