As we probably all know there are different ways of approaching the RTS genre. You can potentially go down the “building stuff, building bigger stuff and armies and kill everything” route. This is something that about 10-million FTP games out there are doing at the moment. The other route is the Civilization model; in this approach, the entire game isn’t about killing everything that moves or proving you’ve got the biggest castle, or gun, or … well you know where I’m coming from. With this in mind I’ll try and give and explanation of some of the ins and outs of Greywolf Entertainment and Iceberg Interactive’s Dawn of Andromeda in as diplomatic a way as possible.

Civilization-type allow for the use of trade, diplomacy and lots of other things that don’t involve violence. Things may still quickly degenerate into war, but it doesn’t need to be your goal. Dawn of Andromeda falls into the second of the two RTS camps I’ve just mentioned. You basically control your race, colonize planets, research stuff and most importantly, survive. Keep your people happy and make sure you have at least some military strength as a precaution.

As usual I’m making this sound way more simple than it actually is. It’s not just important to keep expanding, it’s essential; if you go bankrupt or manage to be despised by your whole population you’ll slowly rot from the inside out. This is just as bad as being killed off by angry aliens. 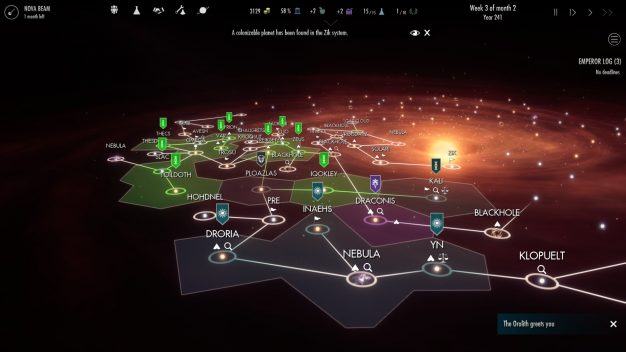 Monitor your empire and of course those of your neighbours.

This title is one of those weird ones that has a story but allows you to jump into that plot at an interval of your choosing. You choose an era. You can go right from the beginning if you so wish, (which is what I did, I mean who opens a book at the end?) and play as one of two races as they explore the galaxy and of course learn about each other. Alternatively you could jump into the game far later when all hell has broken loose and eight alien factions are engaged in all out war. The era you choose doesn’t just dictate where in the story you’re entering the fray it also dictates the size of the galaxy map and the number of races that are occupying it at any given time.

As I’ve just briefly mentioned there are eight factions to choose from in total dependent on where in the over-all plot you’ve landed yourself. If you start from the beginning you can choose between the Terran Union, (the human race,) and the Sythons who are a more politically motivated race. They are of the mind set that all planets and minor races need to be part of their empire and that bloodshed shouldn’t be necessary. This of course doesn’t mean that they can’t defend themselves. Take that mind set and add man into the mix. I think we can see exactly how well that’s going to go. Especially when humanity likes to make everything it can’t enslave extinct. 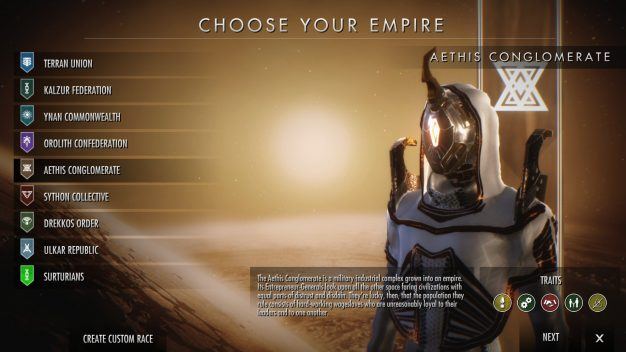 As you follow the story the Orolith Confederation who are a highly intelligent and scientifically motivated group of aliens join the story. One by one the races take their place in the over all plot until you have two fairly major divisions and alliances have been formed. I’m not going to ruin the story by going any further but it’s actually quite good when you get a feel for it.

Before we leave the subject of the levels I just want to make a quick point. I mentioned earlier that this is a game of survival, and it is, but each level also has a completion goal. Initially this is something as simple as surviving two or three years. The later eras, however, will see you needing to complete certain important research, obtain a diplomatic victory or kill a certain enemy. This is good as it makes the experience less of a sandbox and gives it all a bit of much needed focus. 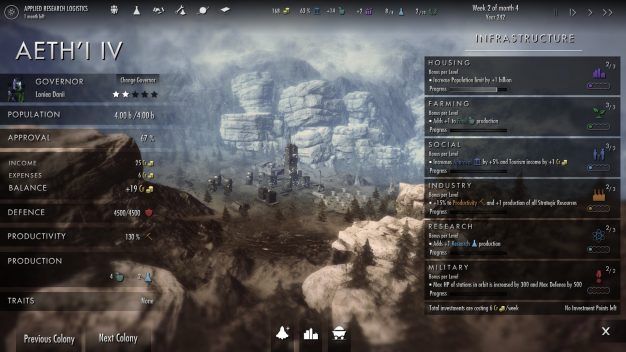 How will you rule?

So what makes the races different other than a bit of backstory? Well apart from looking completely different, it’s their mindsets which tend to effect their perks and flaws that set them apart. A politically motivated race is more likely to generate a high level of public approval and trade, a technological one will be able to research better ships and other items more quickly, a militaristic one will care less about its people but be lethal in battle and so on and so forth. Each race also has exclusive technologies it can research. The Terran Union, for instance, are the only race in the game that can research and deploy neutron bombs.

This game is, as in many games of it’s nature a balancing act. When you aren’t considering what to research next and fending off enemy races and pirates you’re trying to balance several key factors. The first of these is the most obviously one and this is money; a broke empire is a dead empire. Then you have approval. This is how much your own people like you and your council of rulers trust you. You want to keep this as high as possible to prevent civil unrest and various other internal social problems arising. Next is food, this is as important as money, if your population are starving your approval rating is going to drop very quickly. You have your research stat and this is critically important. The higher your research score the more quickly you can research your technology trees and get an edge on the opposition. Lastly is influence. Your influence dictates how other races perceive you and the higher it is the more diplomatic choices are available to you. If I start going into the gagillion different ways these are effected this won’t be review but a thesis. Just take it that these factors are really important if you want to survive in the game. 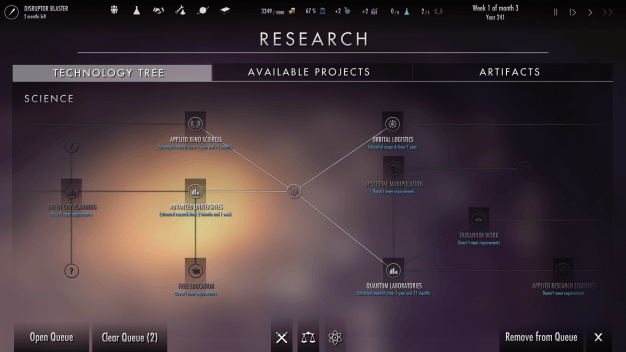 As with many titles in this particular sub-genre of RTS research is something that has to be monitored. Your research menu is broken into three tabs. The first of these covers you research trees: military, social and science and development. The next is an important one. Through the course of the game events will take place and some of these need to be researched. As an example a deadly virus broke out on one of my planets and I had to research a cure. If I hadn’t done this in a timely manner my people would die and approval rating drop. Important event based research options are listed hear. Lastly is artifacts. Just as events need to be researched you will also find artifacts by exploring, be gifted them by other races or buy them through events. Once researched these can either be sold or in many cases will offer a bonus to one of your stats depending on what the artifact is. Balancing all of this research is as important as multi-tasking everything else.

As you can probably see from the above, (and I’m only scratching the surface,) this is a game of micro-management but it doesn’t feel like your juggling a bunch of stats and figures because you’re far too busy getting the next bit of kit researched and built, or exploring, or conversing with other races or … well … playing the game. There is a good level of customisation in Dawn of Andromeda on top of all of the other elements. What you research you can build and that means you can design your ships from scratch making them virtually anything you want them to be within the limits of the game. 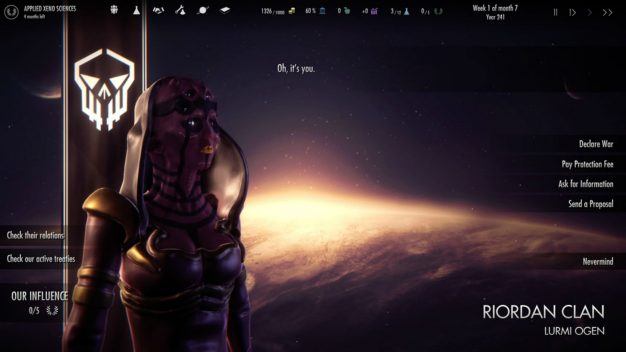 Pirates can be as much of a help as a hindrance.

All in all I’m enjoying Dawn of Andromeda. I’m still playing it which means it’s definitely got me hooked. This is a game that’s about strategy in it’s truest sense and I love that. It was all a bit confusing to begin with and although a tutorial is present it certainly isn’t by any means hand-holding; I found myself working a lot of things out by trial and error. This is not a game for someone who likes the more action heavy RTS titles, I think they’ll find the slow build up you get when starting everything off too cumbersome. This isn’t a game of instant gratification, this is a game of getting a massive feeling of achievement for every success you have and learning from your mistakes. With this being said I’m scoring based on my own personal experience. I think Dawn of Andromeda is going to be a real love/hate sort of game. As you can see I’m leaning toward the “love” camp. All I can say is, high octane enthusiasts, you have been warned.

This is a game for people that really like the nuts and bolts of the strategy genre. If you’re patient with it, it will have a lot of fun in store for you.