It seems like certain genres of indie games will keep coming up, twisted into new variations and plays on common concepts. We’ve seen this with the roguelike genre plenty; its principles have been applied to rhythm games, shooters, and just about everything else. Everspace might be the first example of a roguelike space combat sim, though. The latter genre has been popular for a while now, bolstered by games like Elite: Dangerous, EVE Valkyrie, and No Man’s Sky to name just a few. But these games are complex; I tried to play the simplified Elite Dangerous: Arena and I still needed a YouTube video to explain the controls. And even then, I didn’t have much luck. So mixing this sort of gameplay with the bite-sized sessions required for a roguelike is no small feat. 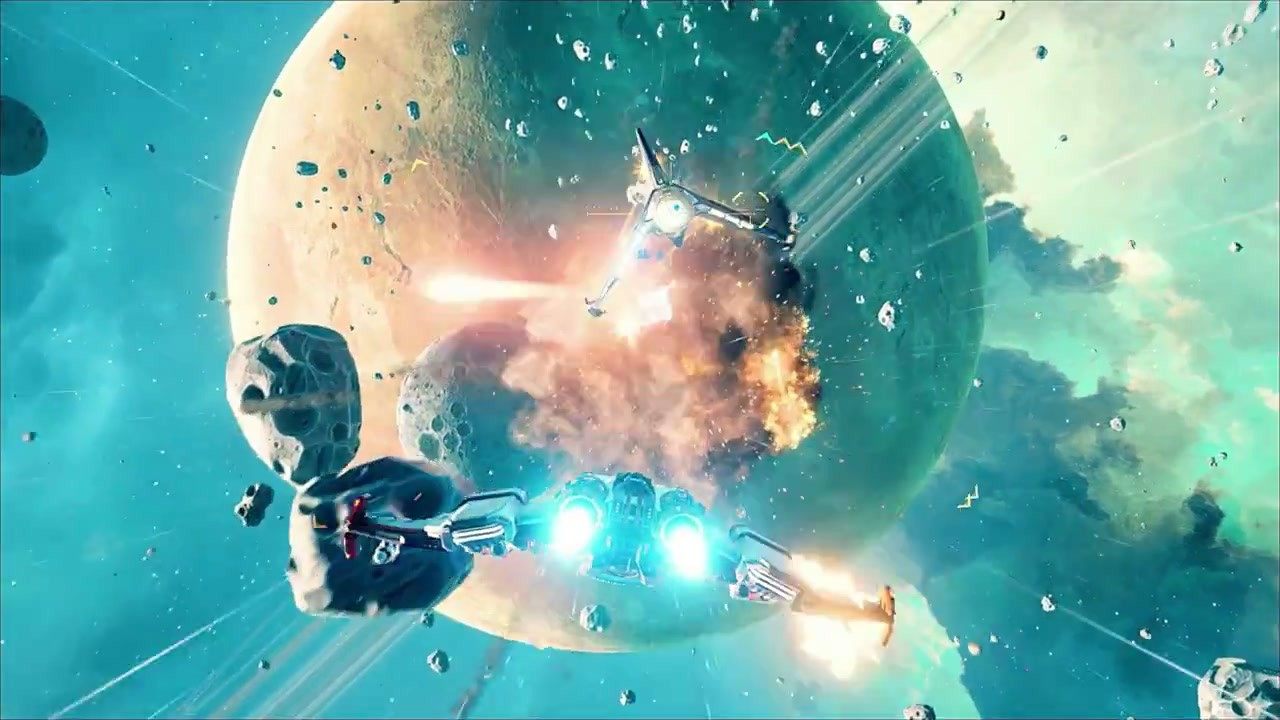 Like a typical space sim, Everspace casts the player as a lone pilot traveling across the depths of space, collecting resources and fighting off enemies. While free, three dimensional movement in space will always be more complex than something like Star Fox, the controls here are relatively straightforward and easy to use with a regular keyboard or controller. This already makes it a breath of fresh air. Even so, there are many aspects of your ship and types of resources you need to keep an eye on.

During your first run, the game will introduce resources bit by bit. You have primary weapons, secondary weapons, built-in devices, consumables, fuel, and energy. There are also various types of resources to collect, which allow for repairs and upgrades, and enemies to fight. But at least early on, what you do is really up to you. The game is split into sectors, and each sector has several areas you need to pass through. The areas are fairly open-ended, so you may decide to scour the sector for every resource and upgrade you can find, or you may avoid as much combat as possible and force your way through. Either way, flying around is fun and relatively easy, so you don’t need a degree in physics to have a good time. 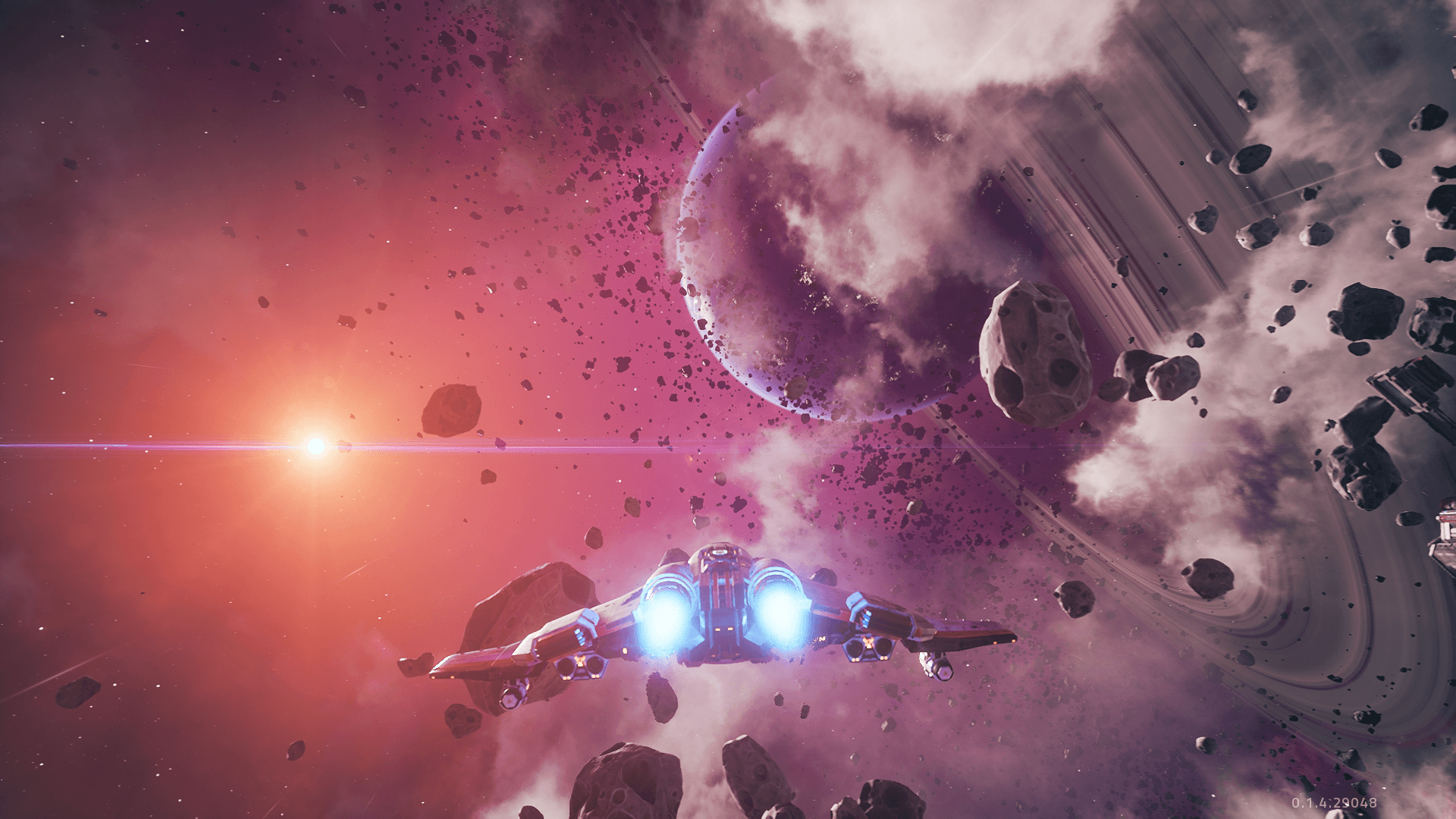 Like a typical roguelike, Everspace is a game in which you will die fairly often. Some resources are very limited, and some combat is unavoidable. Eventually you will be outnumbered by enemy ships and not have the shields or firepower to take them on. But at the end of each run, you can spend the money you find in the world or gain from completing various generic missions, and permanently upgrade your ship. It’s a slow process, especially if you aren’t taking every opportunity you can find to get credits, but eventually getting through the first few sectors is a breeze.

And yes, you do need to start from the beginning with each run, but again, you can get through each sector quickly if you want to. This freedom definitely helps make replaying less of a chore, though unfortunately there is a lack of variation which counters this. Not every section looks the same, exactly, but as far as I’ve been able to see, the process doesn’t change much. Fight the enemies in the area, gather whatever resources you can find, move on to the next area. I’m not sure how long the experience can really last. 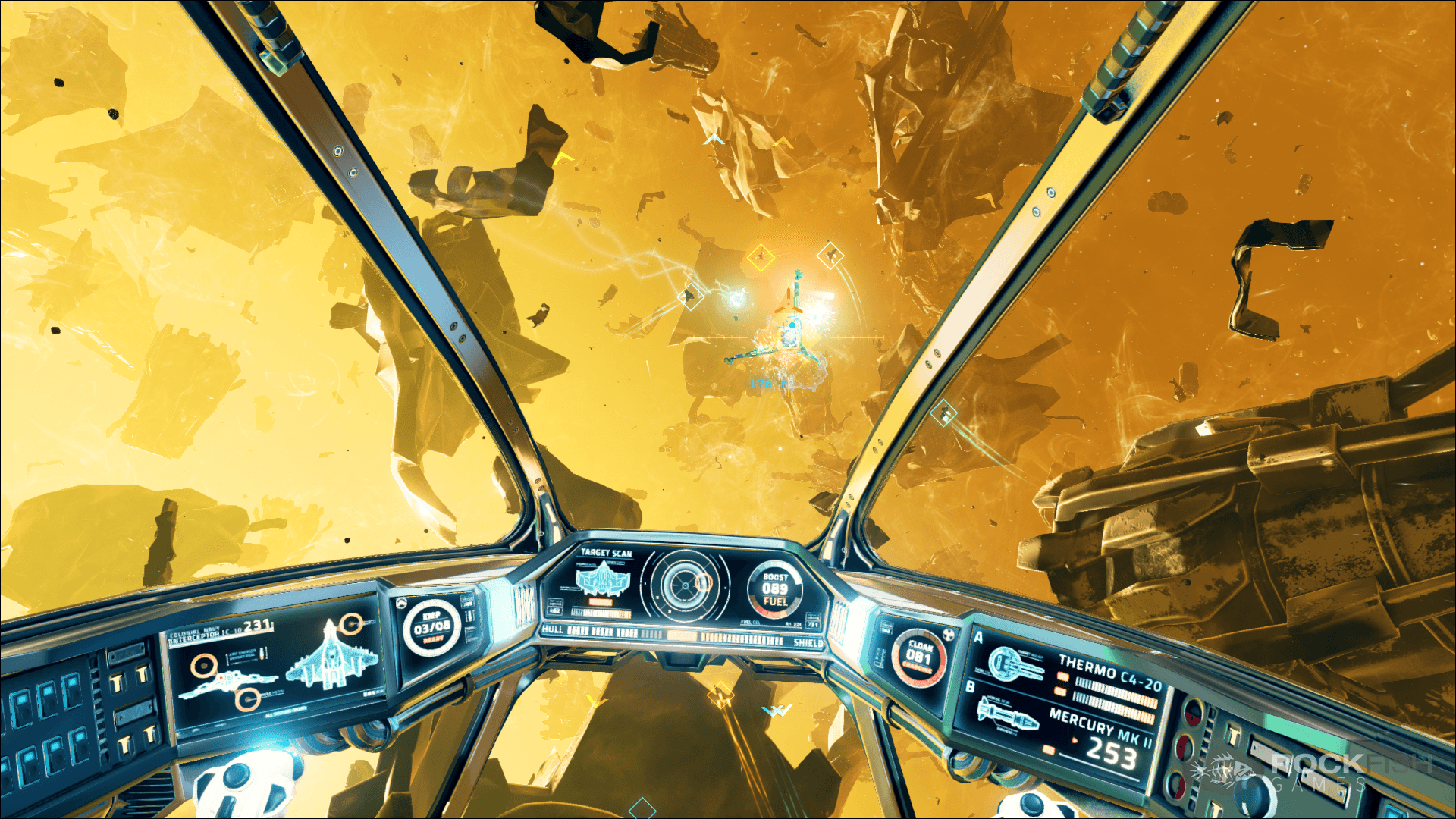 The biggest things to propel you forward are the mysterious story and the beautiful environments. Everspace doesn’t spare any expense when it comes to visuals. The game is set in a galaxy recovering from war, and the shipwrecks and leftover outlaws show the devastation well. Meanwhile, neutral NPCs keep things lively, and you can even choose to attack them for their resources, though this will bring down their military might on you. Different sections glow differently in the lights of various planets and ships, and everything is smooth and sharp.

As your ship’s hull is damaged, small cracks begin to appear in your front “window.” It may not set records given how (relatively) sparse space is, but I’m impressed with the graphics anyway. The story, told through voice acted cutscenes, explains the roguelike elements as each run being a different clone. Over time, the game explains who exactly you’re a clone of, what you’re doing, and where you’re trying to go. While I’m sure it isn’t the first game to do this, I appreciate the developers working the roguelike concepts into the story. 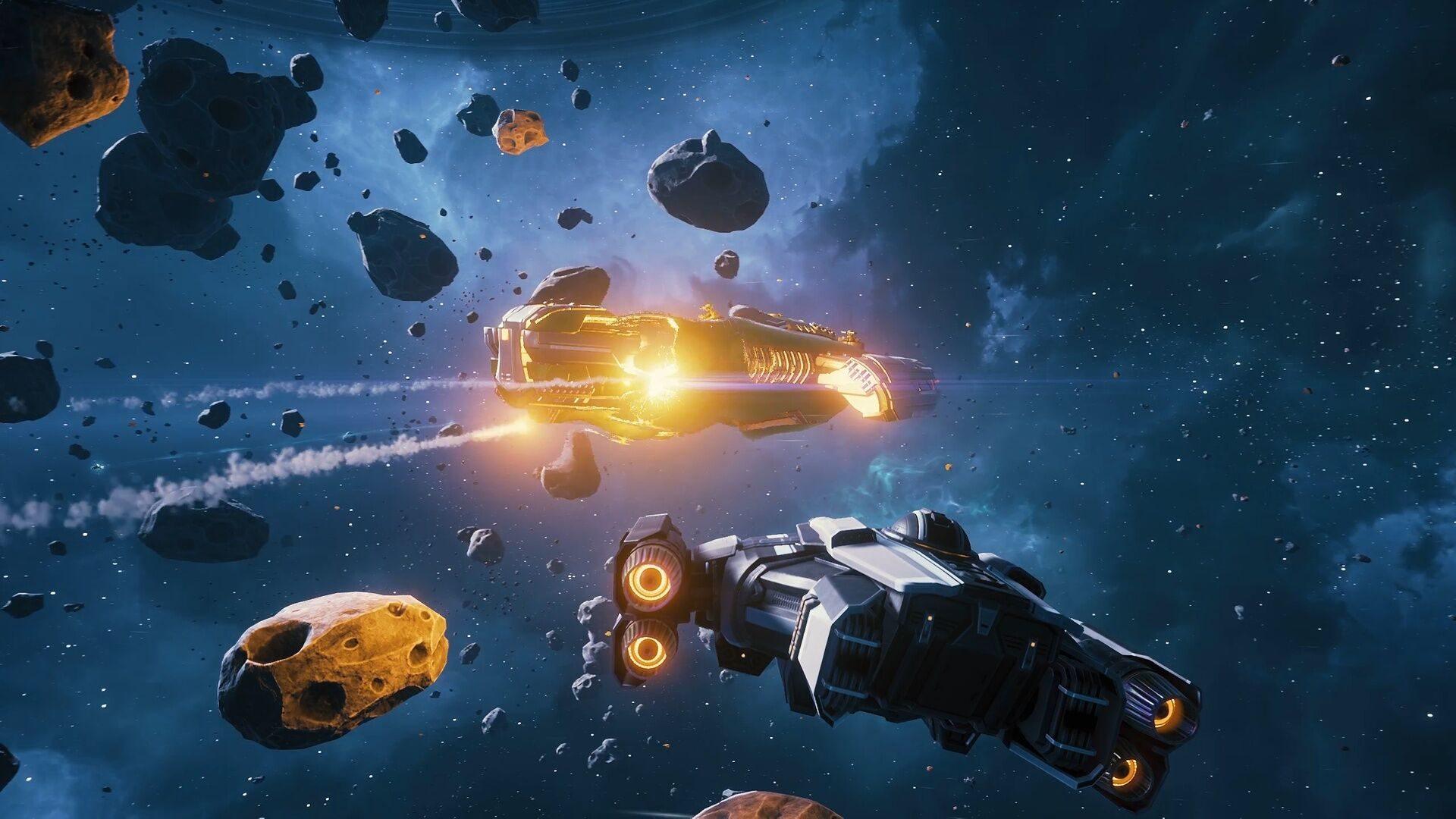 Before concluding, I should note that Everspace includes a virtual reality mode as well, supporting the Oculus Rift and HTC Vive. When playing in VR, you see a much wider and more complete view of your ship’s cockpit, though all of the important HUD information is well integrated and easy to understand. While the graphics take a bit of a hit, the game world still does look very nice.

Unfortunately, it also looks flat. There’s depth to the cockpit, but it kind of feels like you’re in a cockpit surrounded by a screen. Another minor gripe is that it’s impossible to use the third person camera in VR mode, which makes it harder to explore certain areas. It also crashed a few times for me, though that might be on my end. Regardless, given that the game wasn’t originally made for VR, I’m very happy that they included it as an extra option. 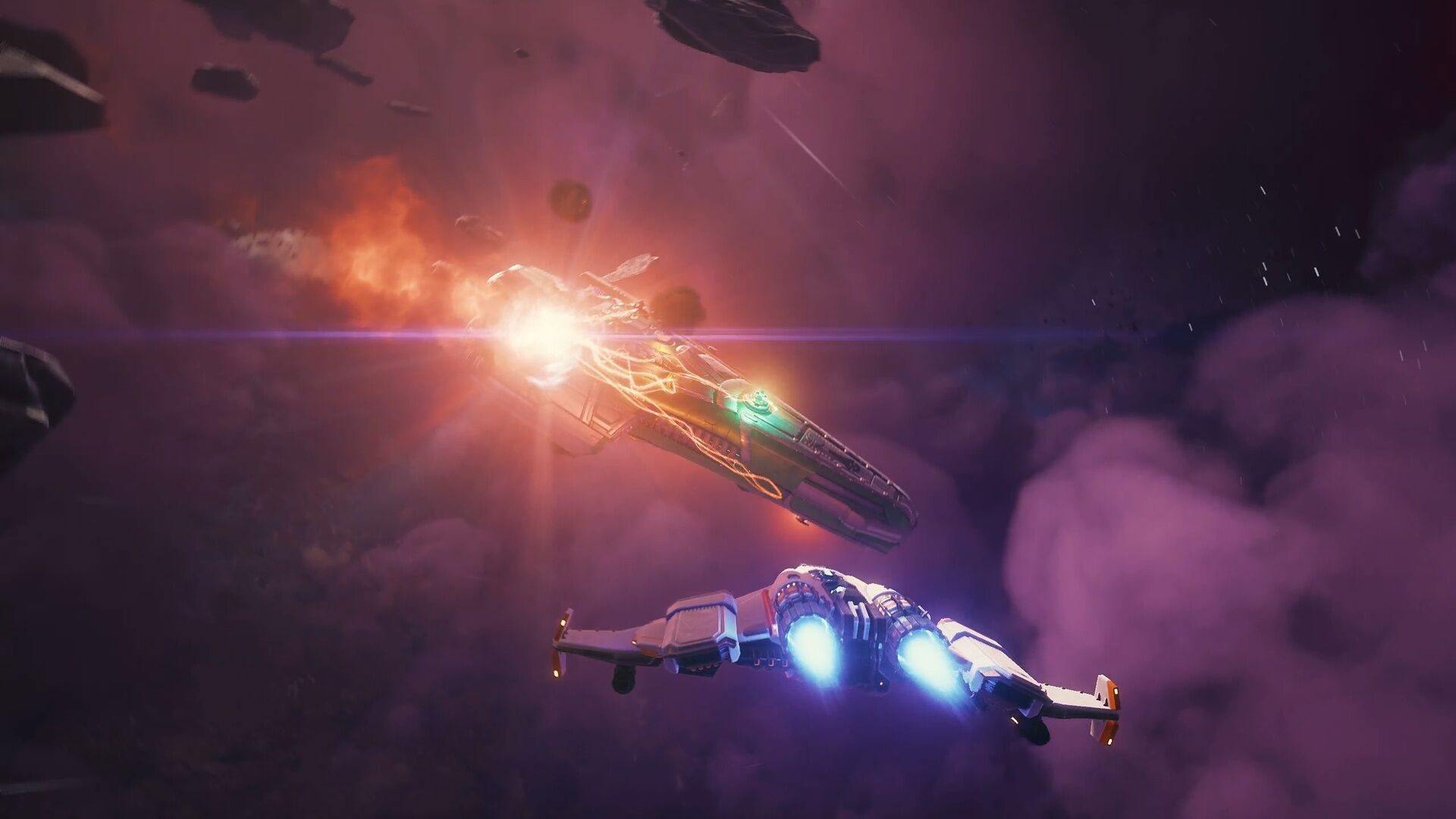 Everspace is certainly more fun and addictive than I would have expected. Besides being the most accessible space sim game I’ve ever tried, it rewards exploration and continued play through multiple runs. It can be a bit of a slog, but the beautiful visuals and mysterious story should keep players compelled. This might not be a game that you play for several hours at a time, but it is a nice experience if you’re interested in the concept.