Do you ever wander past groups of kids or sprightly young adults doing parkour in public areas and wonder what it would be like to run along walls and jump insane distances? Well, Super Cloudbuilt has you covered, all from the comfort and safety of your couch. Originally released on PC in 2014 under the name Cloudbuilt, Coilworks and Double Eleven completely remastered the title from the base mechanics up and re-released the game for PS4, Xbox One and PC. Super Cloudbuilt is the definitive edition of the original game and has been designed to make the experience more intuitive to new players while adding increased depth and variation, as well as allowing players the time to explore in between focusing on breakneck speeds and high scores.

In Super Cloudbuilt, you take control of young soldier Demi, who wakes up in a ruined building, detached from her old life and her physical body. You wander around for a while as a light blue, transparent husk of yourself as you explore the strange new world. Eventually you get a more filled-out form, complete with a rocket-powered exosuit and awesome gun that you can then use to perform incredible feats of free-running and sharp shooting.

After you pass through the opening area, you come to a hospital where you see your physical body lying motionless in a bed. You and Demi come to understand that there has been an accident, and the world that you’re pushing Demi through is a simulation of sorts to occupy and challenge her brain as she recovers. Throughout the hospital are a series of doors with different names and difficulty levels, and following the completion of each level the player learns a little more about what happened to Demi. At the same time, Demi goes through the mental and physical hardship of accepting her new reality as she tries to figure out what happened to get her here in the first place. 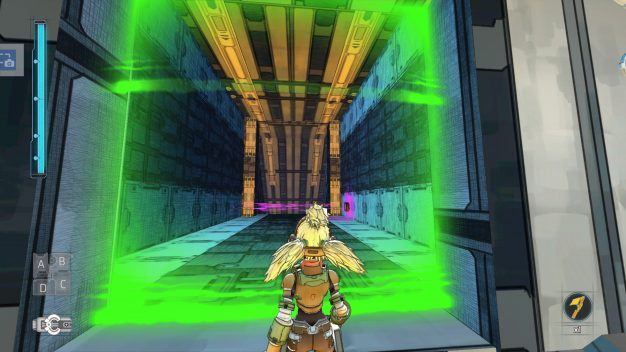 Super Cloudbuilt is all about the gameplay. It’s fast, it’s flashy, it makes you feel cool – exactly what you’d want from a parkour-based game. The controls are simple, although the use of L1 as the jump button and X as the drop/let go of a ledge button handed me quite a few deaths in the first hour of play. However, as with any game with an abnormal control scheme, it’s easy to get used to it. Most of the action is controlled with the trigger and bumper buttons – L1 to jump, L2 to dash and fly with the jetpack, R1 to shoot and R2 to lob sticky grenades. X is used to do your admin stuff (i.e. checking computer terminals and navigating menus) and fall to your death or to a safe location, if you prefer.

Super Cloudbuilt is all about parkour, so your main methods of getting around are wall running and jumping over long distances. Later, Demi gets upgraded with a jetpack and you can start to do small dashes and giant flying leaps over massive distances. Oftentimes these will be combined with a super speed-inducing slide and that’s…well, that’s just loads of fun. Demi can also hang off ledges and cling to walls like Spiderman and orient herself before launching over to the next destination. However, it’s not all fun and games. 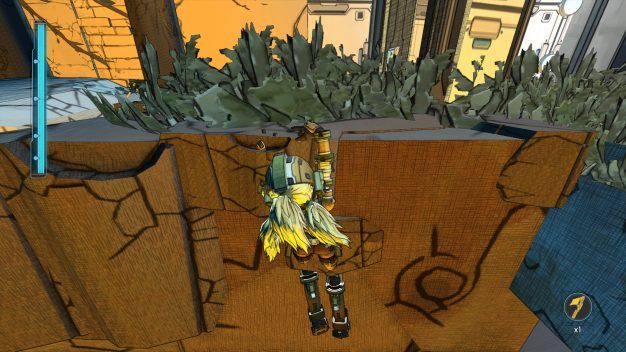 You have a little yellow meter at the bottom of your screen that shows how much flight/movement power you have left for anything more advanced than basic wall running and jumping. You can pick up little power-ups scattered around the levels to fill the meter in a pinch, or if you’re walking around the meter will quickly refill by itself. However, if you run out of juice midway through a long wall-hopping segment, then you’ll find yourself losing a life.

“Losing a life?” That’s right! You have a finite number of lives to use in each level! Oldschool, right? It puts a necessary limit on how many times you can just fling yourself through a level without thinking about what you’re doing first. If you lose all your lives you’ll be returned to the hospital and will have to start over at the beginning of the level. The game does offer checkpoints intermittently through levels, so if you die midway through you won’t always be sent straight back to the start of the level. You can also hunt around and find manual checkpoints that you can set down yourself. The extra checkpoints are perfect for when you’ve found a really difficult spot and don’t want to keep traipsing all the way back over to it every single time you fail. 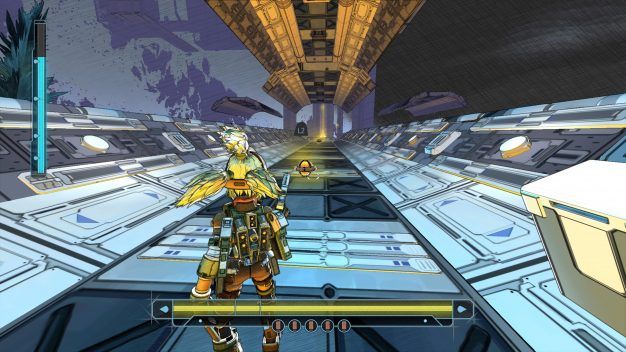 Enemies are typically small robots that fire projectiles at you from afar, or that crawl along the ground towards you to give you a beating close-up. There are also other obstacles you can smack yourself into, such as force fields, mines, and dangerous beams of light. The blue meter at the side of the screen is your health, and there are health pickups throughout the levels to keep you in top form. You can also die by straight up falling into the never-ending abyss below the platforms you’re jumping around on. Dying will take you back to the nearest checkpoint, or to the start of the level if you haven’t hit one yet.

Throughout each level there are also various collectibles to pick up, chief among them being the four metal pieces with “A, B, C, and D” written on them, respectively. If you find all four before exiting a level, you will receive a prize. In fact, at the end of each level there are a series of lockers you can open if you’ve fulfilled various requirements. Some give a permanent upgrade to your number of lives, others give outfit changes for Demi, and there are many more that I haven’t gotten into because they require completing specific challenges. There are a total of 177 challenges between Time Trial, No Ammo, Fragile, Supercharge, Beacon, and Pathfinder options. While I was playing on story mode, there are two other modes: Ranked and Rush. 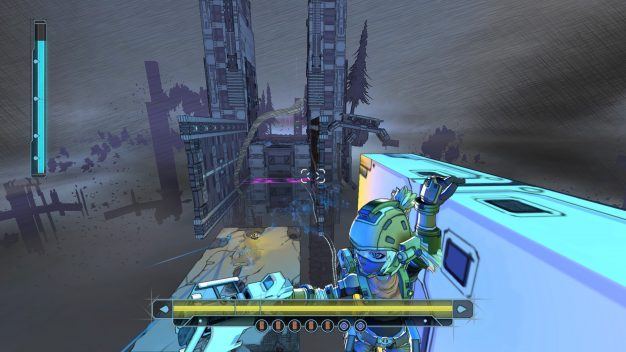 Initially I had some issues adjusting to the weird (to me) placement of the jump/drop buttons, but I never had any issue with the general game mechanics and movement. The gameplay is really easy to pick up, but you have to think closely about what you’re doing or else you’ll soon run out of momentum and find yourself wasting lives by falling down into the abyss. The gameplay feels smooth and not at all laggy, and as I mentioned earlier, it’s downright fun hitting a good stride (or a slide!) and powering through a section of a level at insane speeds. I have but one small, petty niggle about the gameplay and that’s that Demi’s walk cycle looks weird.

Super Cloudbuilt has a really nice cell-shaded aesthetic like you’d see in a Telltale game, although it’s definitely more cartoonish and rough. Both Demi and the environments have this lovely sketchy look about them, like someone decided not to do hard, neat line art before coloring and texturing the environments. Personally, I really like this sort of look and I think it suits the game much better than a really neat and tidy approach would have. Despite the early areas (besides the hospital) being predominantly blocky and grey, between the enemies, pick-ups and obstacles, Super Cloudbuilt still feels like it has a lot of brightness and color. 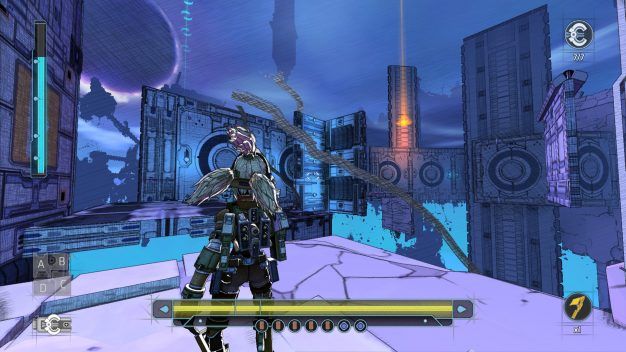 Often there’s a lot going on when there are multiple enemies pursuing or shooting at Demi at once, but even in tenser moments I was never blindsided by attacks. All of the animations for projectiles and the like are very clear and easy to see and dodge (or not dodge, whatever, it happens sometimes, or a lot). It’s also very easy to see where your own projectiles are headed, and you don’t have to adjust for angles or the heaviness of the grenade weapon when shooting, it just blobs over to wherever you had pointed the trigger.

Some might argue that this inclusion sucks away realism, but I prefer it – I know I’m playing a game, it doesn’t have to be realistic. I also appreciated that despite all of the high speed dashing around, the game never felt too hard to focus on, nor did it become dizzying or sickening to play over long periods. The sci-fi aesthetic was really appealing, and the neon colors used in some areas of the game would have easily fit into a lovely B-grade 80s sci-fi movie, which in my opinion is a point to its credit. The music isn’t particularly emphasized in Super Cloudbuilt, but it’s appropriately energetic during levels and sombre and thoughtful during hospital segments. 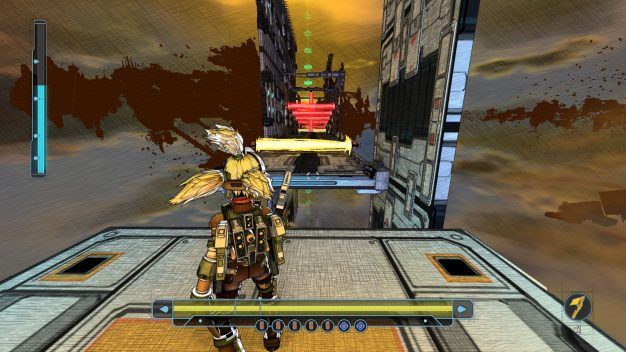 So, to buy Super Cloudbuilt or not? Honestly, I never would have picked up Super Cloudbuilt based on the cover art or the synopsis. However, I’m really glad that I’ve had the opportunity to give the game a go, because it’s really fun. The asking price (at $19.99 USD on PSN) is reasonable and you’ll get plenty of replay value out of the challenges and leaderboards, in addition to banging your head against engaging puzzles in the main levels. Super Cloudbuilt is a cheap, engaging investment that turns every couch potato into a speed demon and it has my seal of approval!

Super Cloudbuilt is a super fun parkour game with beautiful cell-shaded graphics. Whether you’re in it for the story or the challenge, I highly recommend picking up this little number.