Collecting and playing vinyl has been a passion of mine for over 10 years now. In college, my roommate received a record player as a gift, and we promptly went to our local record shop to pick up some vinyl. After playing Air’s Moon Safari on vinyl, I was hooked on the format. I know, it sounds pretentious. But it’s not just about the higher range and fidelity achieved through this analog medium; it’s also a communal and rewarding experience to sit down and listen to an entire album, front-to-back, with friends.

Clinging to this outdated format has been well worth it – the vinyl industry is reported to become a billion-dollar industry this year. I’ve had a few original pressings skyrocket in value, so I’ve seen the demand firsthand. So you can imagine my excitement when I heard about Materia Collective’s vinyl pressing of The Legend of Zelda: Ocarina of Time soundtrack! One of my favorite games of all time, whose music is implanted into my skull, is going to be on vinyl! I’ve never been so quick to pre-order an album off of iam8bit, who partnered up for the release. 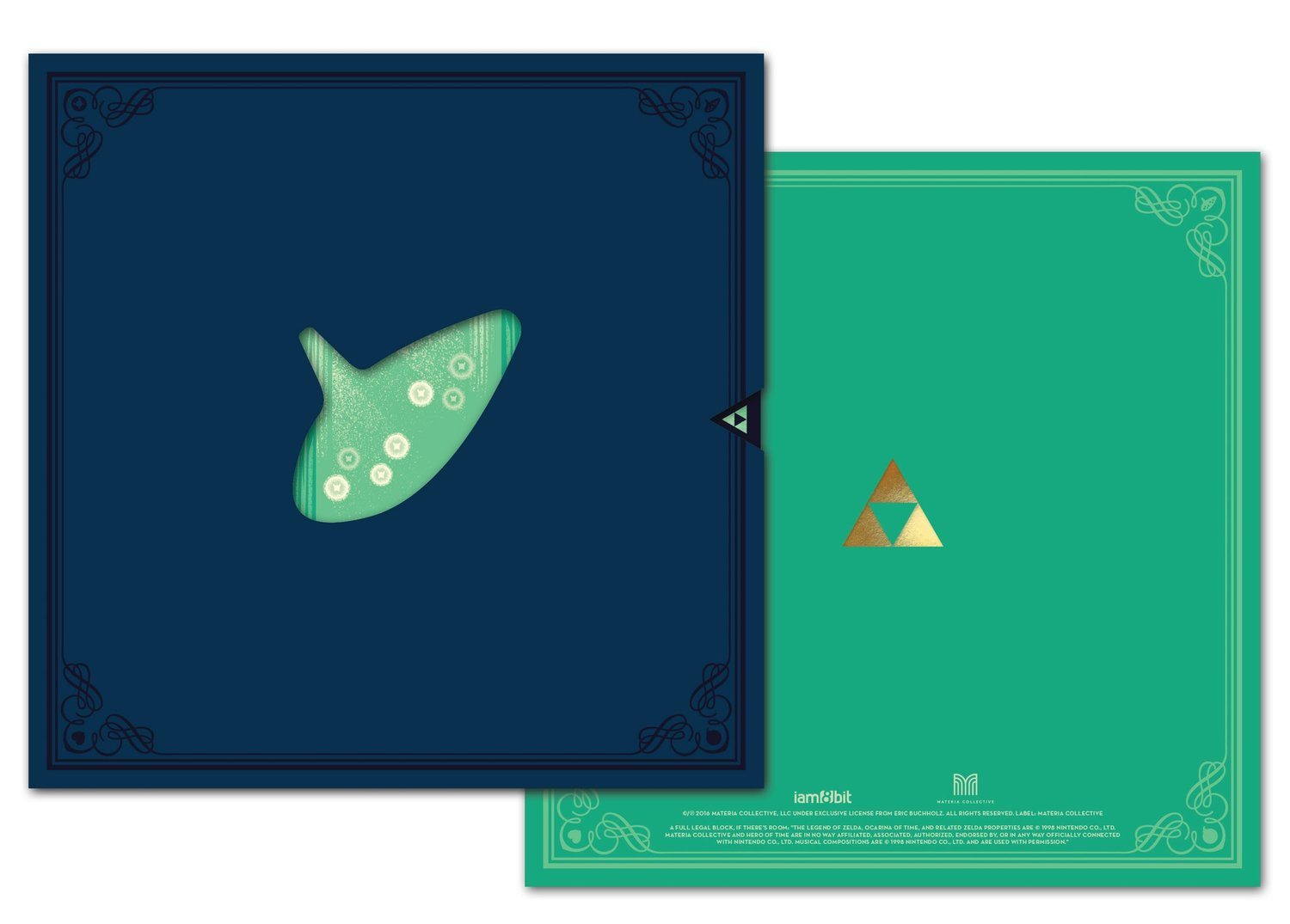 The music of Hero of Time was arranged and composed by Eric Bucholz, whose credits include The Legend of Zelda: Symphony of the Goddesses and The Legend of Zelda 25th Anniversary Symphony. The soundtrack was performed and recorded by the Slovak National Symphony Orchestra, a collection of musicians who are no strangers to video game soundtracks, having performed and recorded soundtracks to Castlevania: Lords of Shadow 2 and Dead Space 3 among others. The double LP is pressed on “green and purple rupee” vinyl and features artwork by Ryan Brinkerhoff (whose images are featured on this post).

The vinyl records themselves are gorgeously stunning, as the color pressings are spot on and look great spinning on the platter. The artwork cultivates great memories of Kokiri Forest and Death Mountain, and Brinkerhoff subtle detail shows how big of a fan he was (and says that he was!) of the original game. My “holy crap” moment was when I noticed that Brinkerhoff indicated each side of the vinyl by heart pieces. Side A is only one heart piece and eventually leads to side D that is the fully assembled heart pieces. Brilliant! 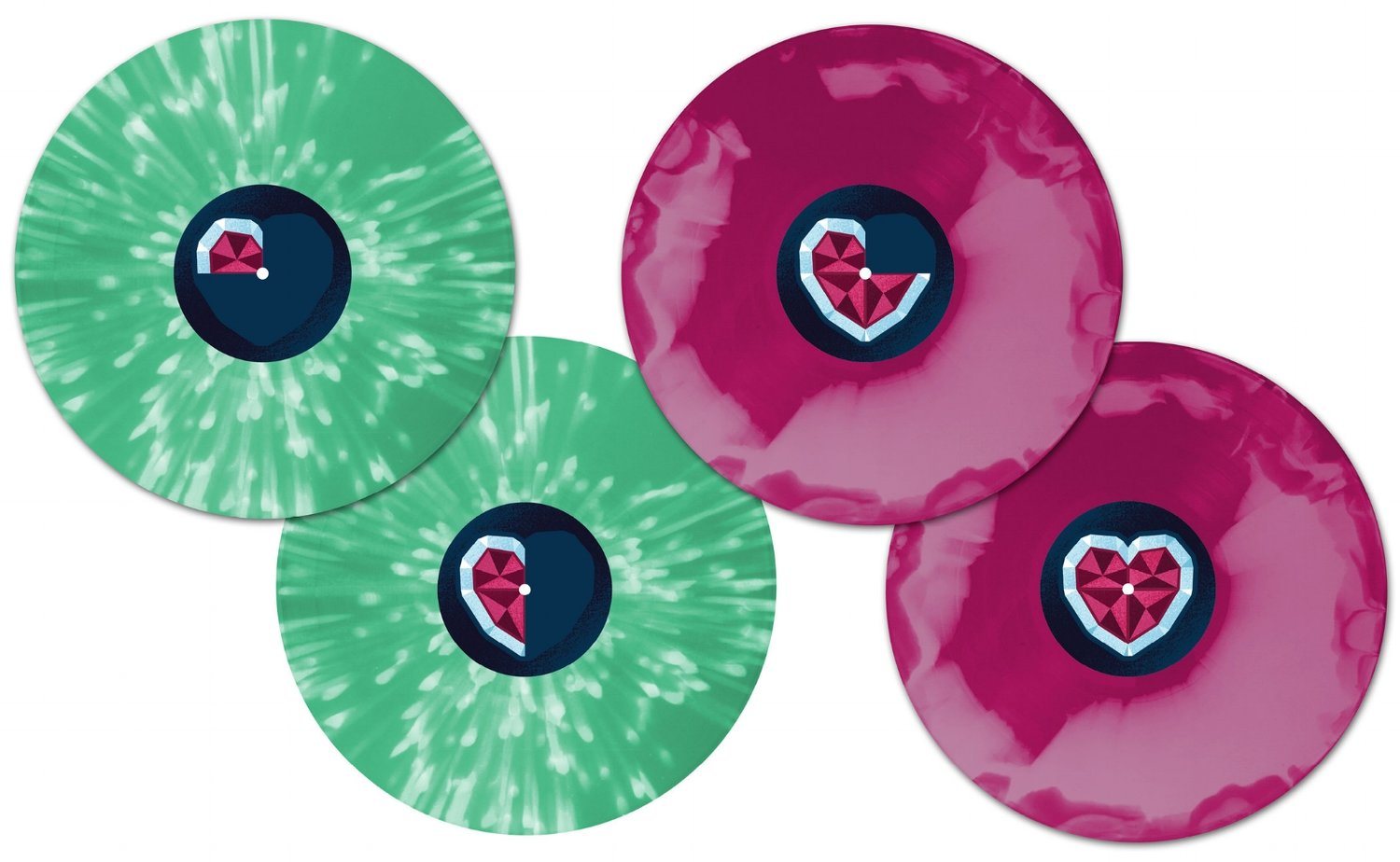 The soundtrack is utterly beautiful. Bucholz and co. have arranged and rejuvenated the work of Legend of Zelda‘s composer Kuji Konda on these timeless tunes. Hearing the opening song “Hero of Time”, which is the song that plays when you are sitting at the title screen for Ocarina of Time, pulled me in right away. I barely remembered flipping to side B on my first listen because I was so engaged in the album.  Also, as I am not a music critic by any means, I was able to enjoy the entire album. My personal favorites off the soundtrack are “Hyrule Field”, “Princess Zelda”, “Spirit of the Valley”, and “Courage, Wisdom, and Light”. All of the arrangements and performances are on point, and if we get a Nintendo Switch remaster of Ocarina of Time, I highly suggest that Nintendo include some of these recordings. Although for “Ganon’s Tower” they’ll just need to add a bunch of Stalfos and Dinalfos playing instruments and percussion to accompany Ganon on the pipe organ.

Hero of Time is an excellent addition to any vinyl collection. Kudos to everyone involved in this project. Also, thank you to the label for pressing plenty of these records (I’m looking at you Spacelab9 and ThinkGeek). Everyone should get a chance to enjoy this album on their turntable, whether you are a hardcore Zelda fan or just a fan of beautiful orchestral soundtracks. The album is available on iam8bit’s site for $40 and is currently back-ordered, with more hopefully arriving in September 2017.

A grand arrangement of the soundtrack to one of the greatest video games of all-time. The presentation and packaging add to an already stellar audio experience.