Pressure Overdrive is actually a rehash of a 2013 game (named just Pressure) that came out for the PC. The developer, Chasing Carrots, took the game and developed it through Unity in order to spread the game to different consoles. The PS4 version was released the end of July, and it’s quite a disappointing experience to play the game.

You see, Pressure Overdrive is a shoot ’em up that takes place in the ground with a steam-buggy and in a steampunk universe. The premise is that a conniving dark lord is attempting to pilfer all the world’s water sources in order to create his own wellness spa. To steal the water, he has constructed machines that suck up the water. It is then up to you to use your little steam-buggy to offset his plans by racing to his headquarters and bring him and his machines down. During your adventure, you will have to learn how to maneuver through crazy tracks with obstacles, use your weapons and gadgets to destroy the greedy water-sucking machines, and balance your steam-buggy’s need for pressure in order to run.

The main mechanic in Pressure Overdrive is the pressure system. Firing your weapons and using your gadgets (such as a turbo boost) uses up pressure. There are two ways to gain pressure: it regenerates over time when weapons or gadgets are not used or destroying enemies. Dispatched enemies also drop gold, which is used to upgrade the steam-buggy. There are six areas of the steam-buggy that you can upgrade: its front, rear, top, bottom, weapon, and body. With at least six different parts to attach and upgrade to, there is literally a lot of different combinations that you can customize to. 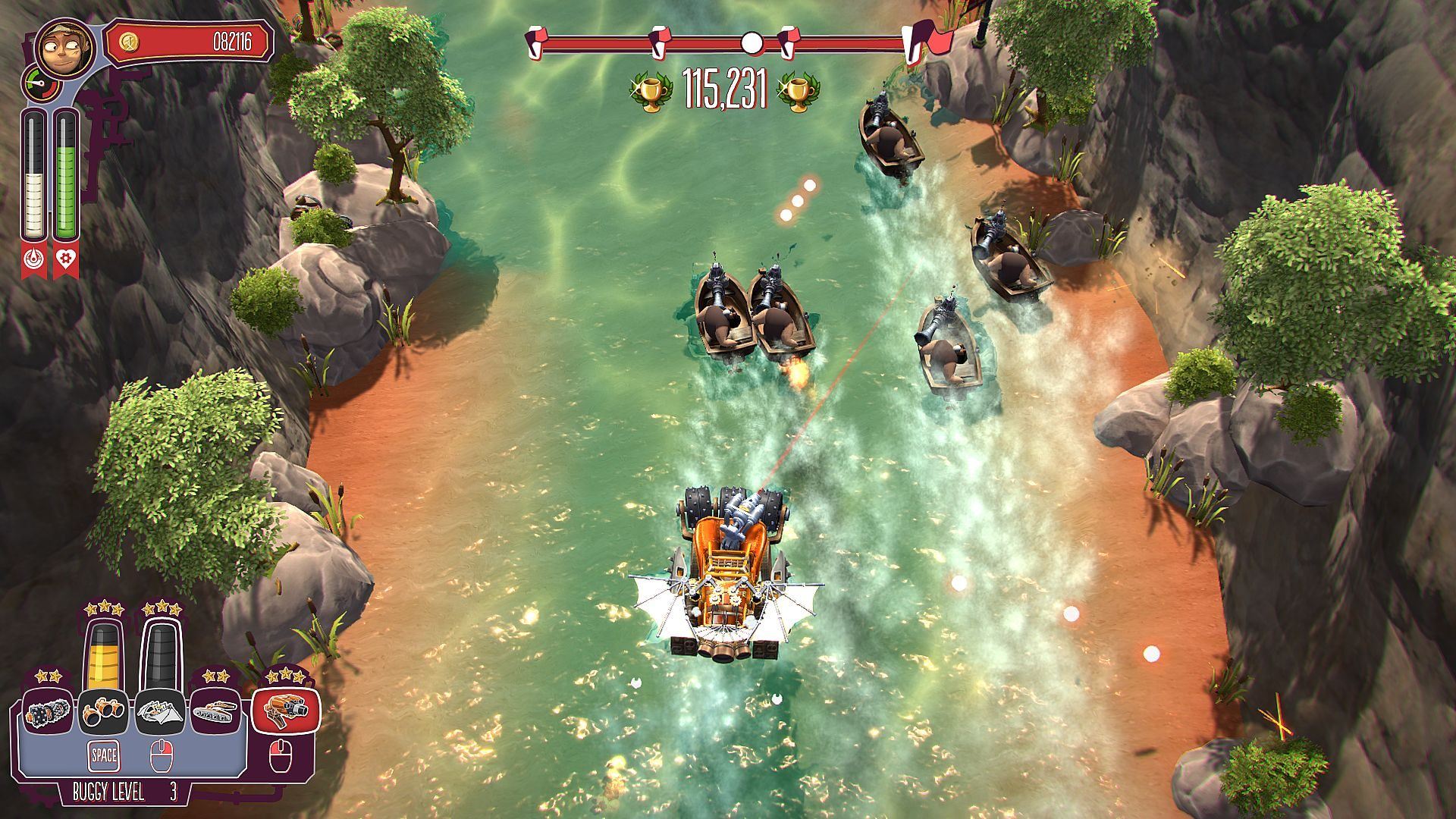 Customization is one of the good things about Pressure Overdrive. To suit your style, you can opt for a electricity-inducing Tesla buggy with a zapping weapon that jumps to multiple enemies and a rear zapper that takes care of the enemies behind you. Or you can opt for drones to fight for you while you ram nearby enemies with your spiked wheels. The possibilities are endless…if you have the gold for it.

That’s where my disappointment comes in. During the campaign mode, the gold you earn in each level is capped by how many enemies there are. Thus, if you want to maximize your earnings, you have to kill all of the enemies in the level. That’s a good goal if you can keep up with the right upgrades for your steam-buggy. The thing is, once you purchase an upgrade for your steam-buggy, the gold you pay for will be gone. 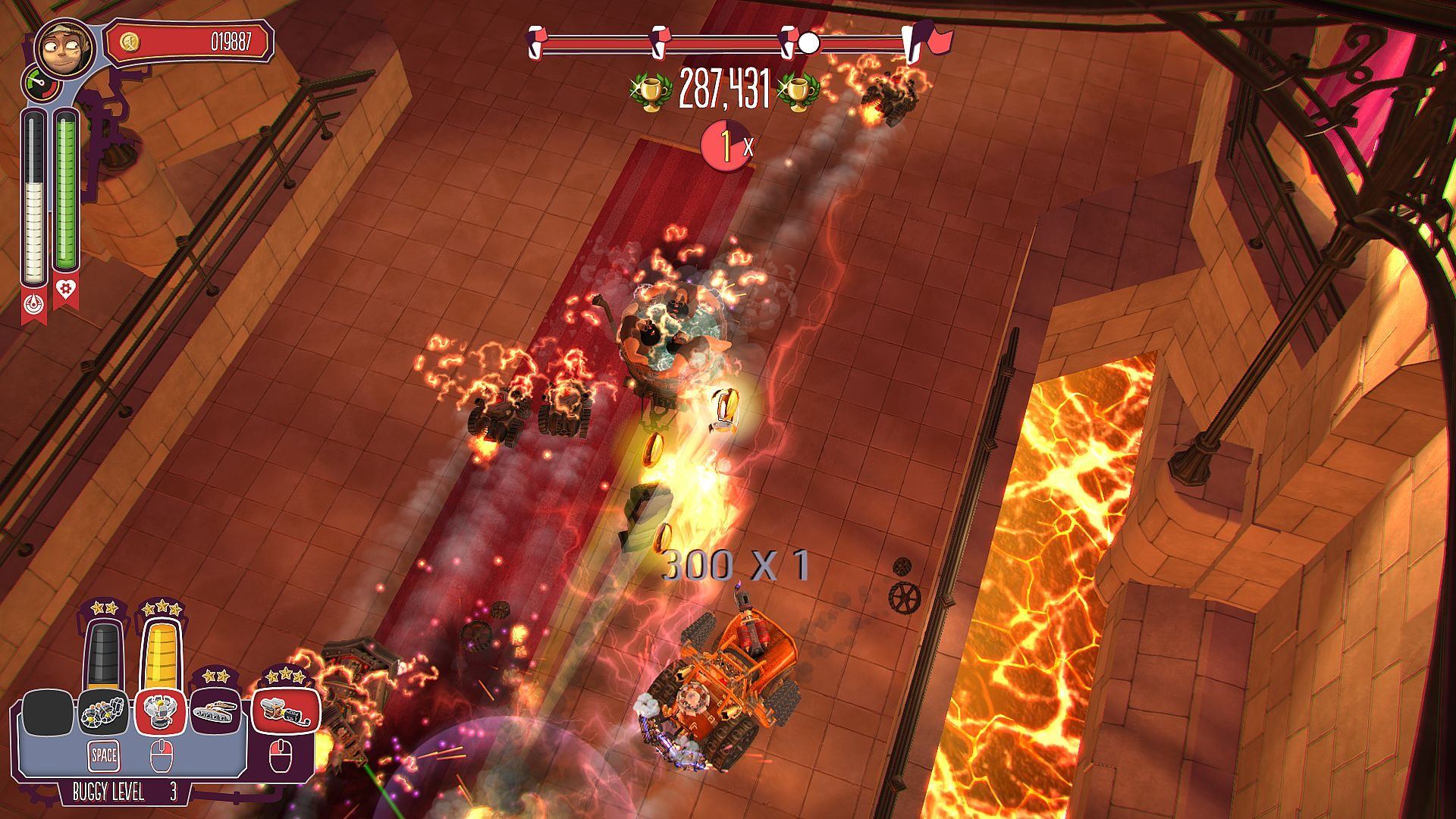 You say, “Well that’s fine, since you got an upgrade, right?” Well, the problem is that if you choose the wrong upgrade, that may mean you will have to restart the whole campaign all over again, since your effectiveness in killing enemies and collecting gold will diminish over the future levels. By the way, to pour salt over the wound, you can replay old levels to better your gold retrieval, but you are stuck with the upgrades you have made from that point on in the level; upgrading your steam-buggy affects future levels, but your past upgrades are stuck with you in the previous ones.

On easy and normal difficulties of the campaign, the gold issue is slightly alleviated with giving you the option to sell back upgrades for a fraction of the cost (with normal difficulty being less of the fraction given than the easy difficulty). The problem is that you still will come off with less gold than what you started with. In the hard difficulty (which by the way, there is a trophy awarded for completing the campaign on hard difficulty), there are no buybacks.  What annoys me about the whole gold and upgrade mechanic, is that it discourages the experimentation aspect of the game. You literally will have to figure out what is the optimum steam-buggy setup, and you will have to plan what and when to upgrade. 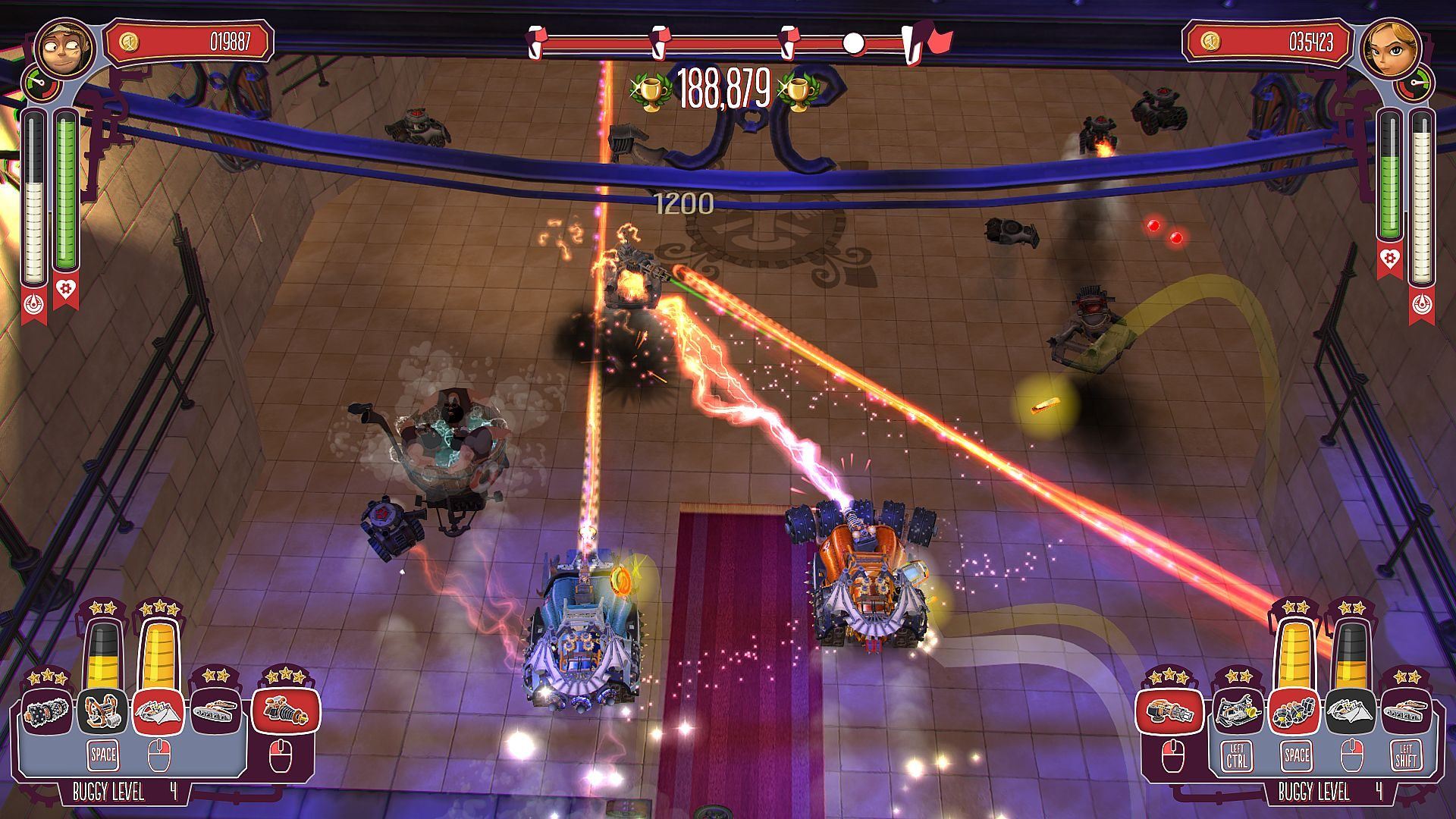 The developers noted in a forum I read that the reason there is a freeplay mode is for that experimentation aspect. The gold and upgrade mechanic was devised in order to preserve the integrity and difficulty of the campaign mode. While I think that explanation is a little ridiculous, one of the flaws about the freeplay mode is that you have to beat the main campaign first in order to unlock all the 33 different levels, which again brings me to the point about having a good strategy (or read a good guide).

Speaking of a good guide, you might have to refer to YouTube for the original game in order to beat some of the boss battles. There are three bosses in the game, and defeating them is somewhat of a puzzle. While that aspect is quite fun, what gets frustrating is that the game gets particular (or it may be a glitch) in order for the boss to change its attack patterns for you to take it down sometimes. Thus, you are left with a barrage of constant attacks with no reprieve on taking down the boss. 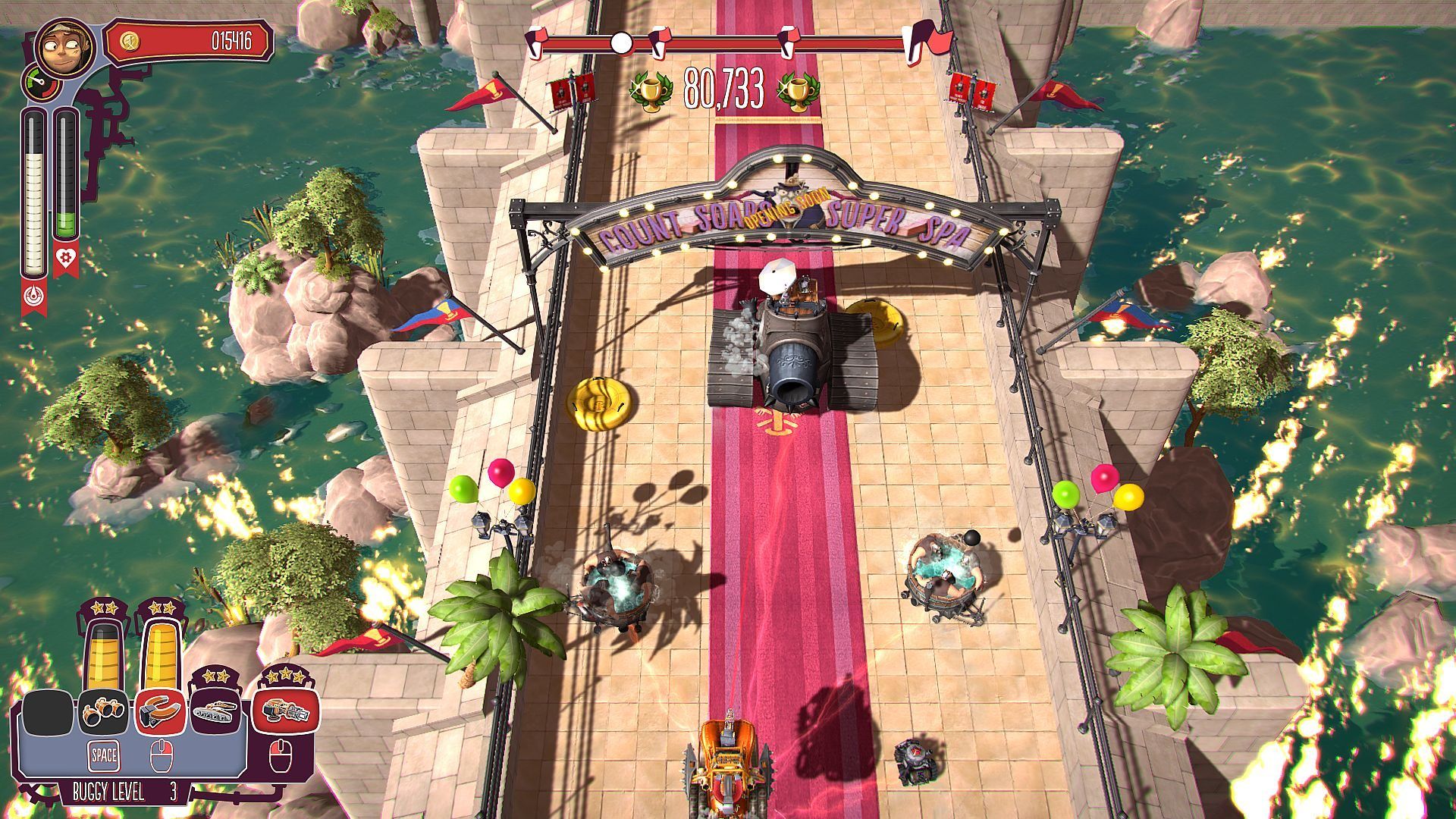 Those who are left insatiable with the 33 levels of Pressure Overdrive can take on the endless mode. In this mode, you keep going and going until your steam-buggy’s hull is destroyed. Each completed level gives you a spin on the wheel that gives you a random assignment of upgrades to choose from.

If Chasing Carrots can make changes on its gold and upgrade mechanics and deliver it in an update, then I could say Pressure Overdrive is a fun shmup. If the developer also tweaks around its boss battles to not be so particular, then the game would be even better. However, with its current state and mechanics, I can only recommend the game to those who are willing to plan upgrades and look up guides to beat bosses in order to complete the game…which I do not think is fun.

Race to the Dark Lord's HQ to Save the World's Water