In 2015, a PewdDiePie game jam entry transformed into the popular stealth title that is Party Hard. This summer, Pinokl Games and tinyBuild Games are bringing us a revamped sequel to the krump-inducing video game. We have had the chance to try out the Alpha for Party Hard 2, containing 3 Alpha levels that have been released over the past few months. Party Hard fans are expecting up to 7 Alpha releases before the final game launch. For now, here’s our verdict on the already released Alpha levels, as well as the impression that Party Hard 2 left on us so far. 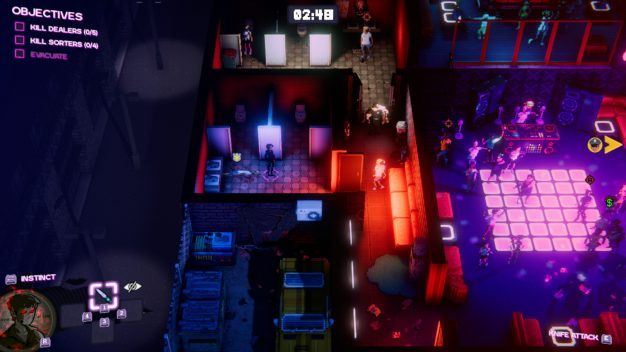 Overall design changes, including HUD and map layout, are quite significant in Party Hard 2

The main menu alone gave good old Party Hard groovy vibes – from the music to the flamboyant colors and high-contrast design. As previously mentioned, the Alpha for Party Hard 2 has 3 levels: a Club level, a Hospital level, and a Bar level. You play as Darius, the purple-attired serial killer behind the Party Hard killings. After jumping into the Club level headfirst, we noticed significant design changes from the first game.

First off, the game graphics are no longer strictly two-dimensional. The developers have created a 3D in-game environment and combined it with 2D pixel character art. Party Hard 2 demonstrates advanced lighting and shadow effects with dynamic hues. Characters now move more smoothly than in the first game, while maintaining their retro 2D character design. The overall design gives Party Hard 2 a wider and less restricted feel when it comes to maneuvering through level areas. 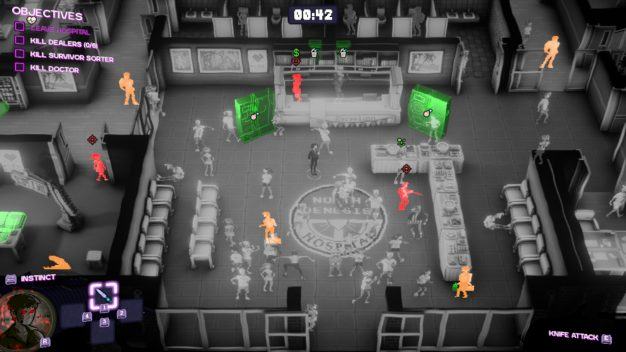 In Party Hard 2, Instincts highlights all opportunities, threats, and targets in your surroundings

A brand new head-up display now shows listed objectives, abilities, inventory, and an Oxygen meter. Objectives are now more refined than they were in Party Hard. Instead of having to kill everyone in the level, you are assigned a specific number of targets and categories. For example, in order to beat a certain level, you’d have to kill 6 dealers and 4 bikers. Afterwards, you can evacuate and leave the scene, or keep on slaughtering if you feel like it. In Party Hard 2, you get to have an Instinct ability, which you can activate by pressing the tab button. Instinct allows nearby hideouts, traps, tools, and sabotage opportunities to be highlighted in green. On the other hand, your targets will glow red. Potentially dangerous characters, like beating bouncers, will glow orange.

The availability of a four-slot inventory allows you to collect tools that aid you through your murder expedition. Darius’ knife will permanently fill one of the four slots, leaving three more to fill with other tools, such as fuel tanks and bear traps. The lung-shaped oxygen meter’s purpose is to show how much oxygen you’ve used up while running. Once the meter is empty and flashing red, you have to remain still in order for Darius’ oxygen to replenish again. The second ability is called Ultimate, where while holding the R button, Darius can kill any number of characters within a small radius. The Ultimate ability has a meter that also replenishes over time. 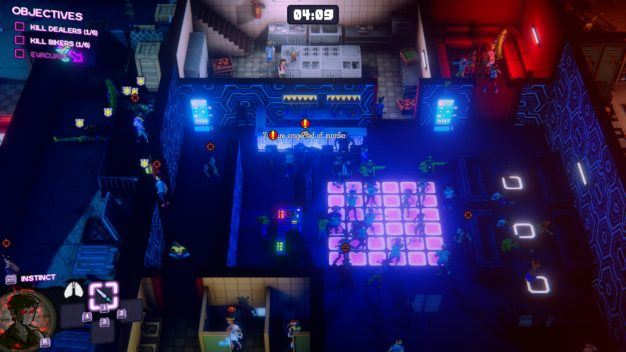 The only drawback to the Party Hard 2 Alpha is a very specific glitch, where at several points, Darius is left hanging midair if carried by police officers or bouncers. Gameplay is relatively smooth as long as you aren’t suspected or caught by the police. If you plan to stab a victim, be sure to do it as discreetly as possible. If the police arrive and they suspect you, be constantly on the move between hideouts. Most importantly, enjoy the explosions and sabotages while hiding in plain sight – that’s the most fun part.

Out of all 3 Alpha levels, the Hospital is the level with the largest and most impressive map by far. The level also pays tribute to the TV series, House M.D. with an Easter egg. One of the new challenges is the increase in number of police officers being dispatched to the scene, since they spread out. Moreover, some NPCs like the cleaning lady and bouncers are quite difficult to kill.

The plot of the game is yet to be known. According to tinyBuild, this is the (very brief) synopsis of Party Hard 2…

It’s the Holiday Season, and you don’t get your Christmas Bonus. The only logical solution is to start a killing spree at a corporate party.

So far, we are assuming that the protagonist is still Darius, reprising his role as the Party Hard killer. We are looking forward to know more about the plot and in-game characters. The twist at the end of the first game left us expecting more on Detective John West and Darius – that is, if the developers are planning to go down that road again. Moreover, we would love to see more variety with the murder tools being used by Darius to execute his killings.

If you would like to stay updated with Party Hard 2 news, make sure to check out tinyBuild’s Twitter page. You can also read more about their latest survival horror title, Hello Neighbor, here.