You’ll either rejoice or despair.

Rockstar Games has announced its next GTA DLC: Smuggler’s Run.  It launches today, August 29th, and is sure to be another massive success.

This update centres on Nervous Ron, Trevor’s sidekick in the game.  He’s turned to smuggling, and needs a new business partner to help him stay sane.  That’s where you come in.

Smuggler’s Run opens up the airways of Los Santos and Blaine County, which is a good thing because the roads are by now filled with motorcycle gangs, rogue CEOs and dangerous armed militia thanks to the Gunrunning DLC released a few months back.

However, just because the skies have opened up doesn’t mean you’re not in danger.  Yes, you have access to a new range of planes, choppers and ultralights but you will still have to deal with hydras, anti-aircraft missiles and public lobbies filled with players who want to ruin your day in the most explosive way possible. 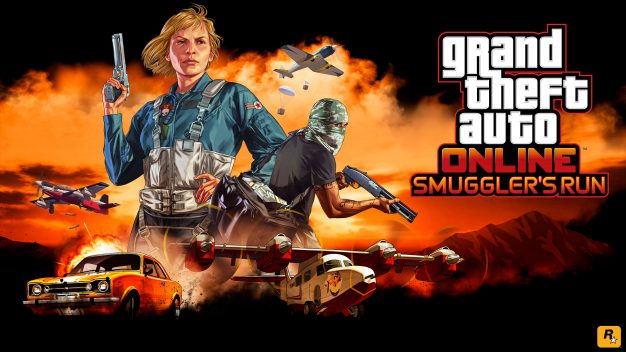 Smuggler’s Run promises a massive range of new, customizable aircraft along with expansive new aircraft hangars where you can house your aircraft.  Your hangar doubles up as your HQ for all things smuggling.  Nervous Ron will be on hand to guide you, and Charlie will be your mechanic/assistant who will take care of fixing your sure to be damaged machinery.

Looking online it seems like this update is receiving mixed feedback from players.  Some are genuinely excited at yet another free DLC from a game that has provided so much entertainment in the last few years. They’re looking forward to getting some airborne action and the trailer certainly offers that.

Others are unhappy that it’ll be yet another expensive set of options, forcing hours of ‘farming’ or having to buy Shark Cards (the in-game currency option) to keep up with their friends, and that’s not to mention the effect it might have on public lobbies where pilots in Hydras already try to ruin every bit of fun by destroying everything in sight.  Giving them more flying machines and other weaponry might just be a step too far for some.

Either way, be ready for an expensive time of things.  I downloaded the DLC this morning and with the most expensive of every hangar/vehicle plus all optional upgrades (engines, weaponry) there was not much change out of $35M in-game cash.