Another day, another platformer. It’s difficult to reinvent the wheel when developing this genre. However, I do appreciate more nuanced layers in these kinds of games. Pankapu, a new 2D action/platformer, takes on this challenge by presenting an interesting two-story structure and wonderful aesthetic. However, it falls victim to underdeveloped mechanics and questionable level design. These things detract from what could have been a more memorable platforming experience. 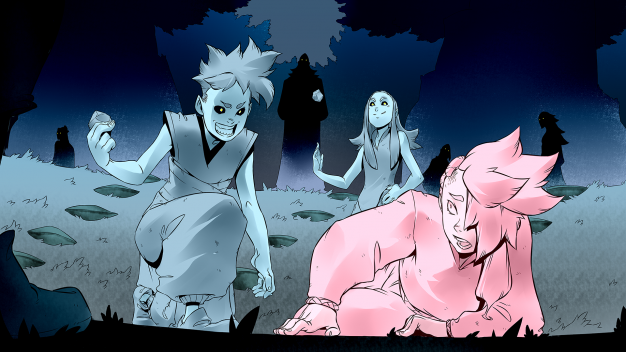 The title happens to be a narrative-driven one. The narrative switches between two settings, reality and dreams. The story line of reality bases itself on a boy named Djaha’rell. Apparently suffering from some tormented life, Djaha’rell prefers to escape to the land of dreams…Omnia. Narrated to him by his father, Omnia becomes the setting for the second story line. This is where we are introduced to Pankapu “the Dreamkeeper.” Pankapu must defeat the nightmares (Hya’Nagi) that plague Omnia and restore peace to the realm.

I thought this two-story structure was an interesting setup for this type of game. It added some intrigue to the worlds these characters inhabit. I also appreciated how this game did not waste too much time with lore and background info. It tosses you into the environment rather quickly. With platformers, I definitely like to get into the action right away, and Pankapu delivers this from the get-go.

The story itself was so-so. The objective is easily understood and I determined to progress further. I also appreciate how the story is told as a fable, allowing the developers be more creative and fantastical in their world building. On the other hand, the dream world did not tie into reality enough for me to buy-in to the conflict. I was hoping consequences from Omnia would reflect in some way to the reality of Djaha’rell. A missed opportunity to keep me invested into the story throughout the game. 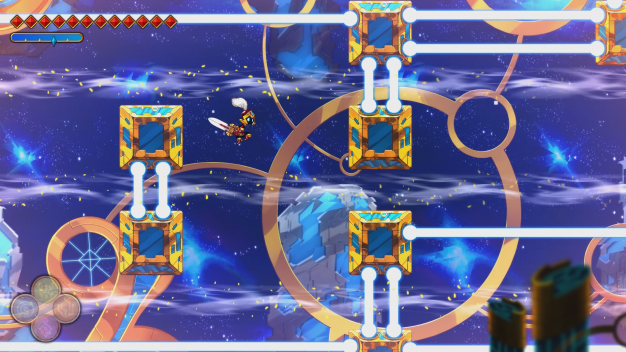 My favorite feature about this game is how aesthetically pleasing it is. The pristine digital artwork that went into Pankapu is evident throughout. I adore the lighthearted character design. Pankapu is a fierce looking warrior by the standards of the world in which he exists. The supporting cast of characters share that same feeling of light and fun. Even the enemies are mainly just blobs with eyes. Although they represent nightmares, the darkness doesn’t feel as threatening. Comparable to the goombas from Super Mario, from which this game draws inspiration, the Hya’Nagi seem much less lethal than they may actually be.

In addition, these creative creatures exist in a vibrant world of dreams. The art style is truly shown off in this respect. Vivid backgrounds and contrasting colors accent just how much effort went into this phase of the game. Colors even played a role in the gameplay itself. Each different color aegis signifies a different specialty Pankapu may equip himself with. Red = warrior, green = archer, and blue = mage. Taking a strong aspect of the game design and implementing it into the gameplay was a genius decision by the developer. As I see it, this game knew what it had and accentuated it to distract from where it falls short. 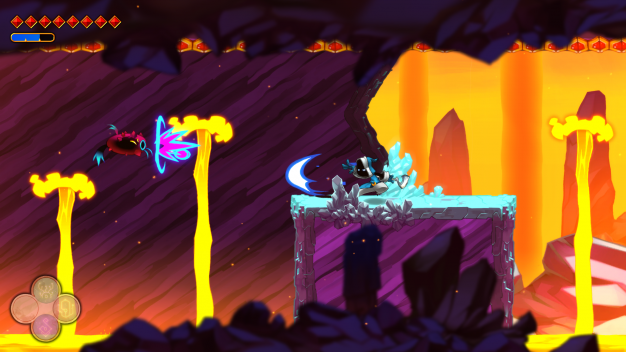 I’ll be honest. I am not the biggest fan of platformers. However, I refuse to let my bias influence my opinions of this particular game. Every gaming experience is different, and I always go into a new one with an open mind. I have expressed how Pankapu provides intrigue with story structure and game design, but it just wasn’t enough for me to get over the frustrations of the gameplay.

The controls are somewhat responsive, but not precise enough for a platformer. For this genre, they need to be as tight as possible in order to succeed through the difficult levels. I think the developer decided to incorporate a light and “floaty” control mechanic to match the aesthetic of the game. Perhaps a courteous design choice, but it took away from the actual gameplay and my enjoyment of the game.

The level design is Crash Bandicoot levels of hard. In a sense, you must learn exactly how to control Pankapu in every situation. The level design involves a lot of timing and control in order to progress. It may take several tries before you can reach the next checkpoint (which are scattered sporadically and inconsistently). I understand making a game difficult as to provide a challenge. However, the ends don’t justify the means for me in this scenario. As I stated earlier, the story did not present high enough stakes for me to buy-in to the conflict. I didn’t care much for any reward awaiting me at the end. In the end, I feel the difficulty of getting through each level was fleeting. 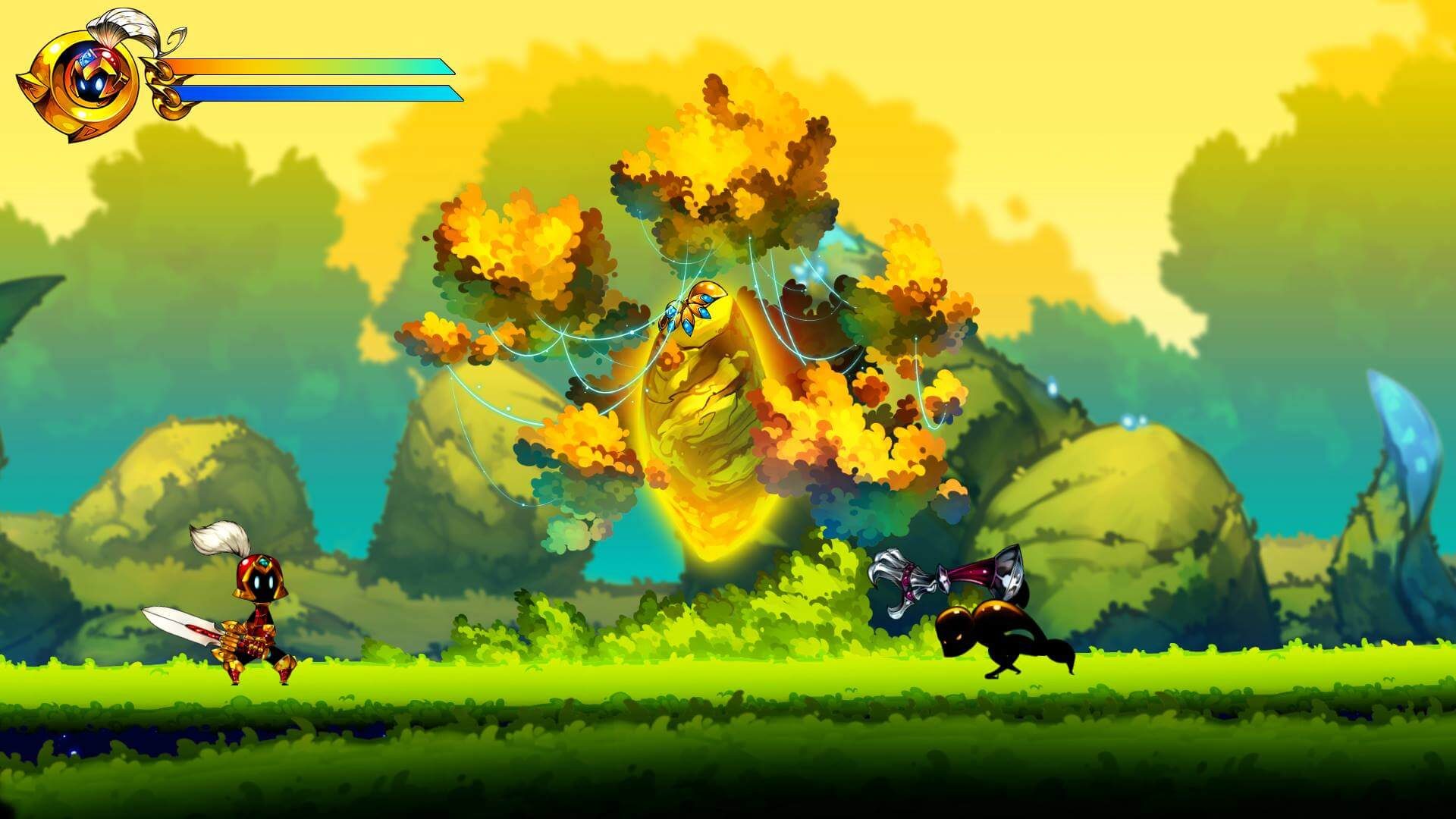 First, let me say how I admire an indie developer like Two of a Kind for relying on the gaming community to help them with projects through crowdfunding platforms like Kickstarter. This truly shows how proactive the gaming community is. Supporting smaller developers to get their hard work noticed and appreciated is important. Unfortunately, Pankapu‘s great potential is stymied by the gameplay mechanics. It’s unfortunate because I was genuinely intrigued from the outset. It has a few things going for it. If you prefer more lighthearted games with beautiful scenery, then of course I would recommend it. For me, I simply lost the opportunity to be fully invested in this game. I became too distracted from the gameplay, and it took me out of any possible immersive experience I was hoping for.  However, if you are a sucker for platformers, give this game a chance. The developers undoubtedly put a lot of heart into this project and it shows.

Although the design is elegant and presents a peaceful/surreal atmosphere to explore, the game falls flat with underdeveloped mechanics. The gameplay suffers and overall, the experience is somewhat forgettable. It is difficult to stay engaged, even with the simplistic story, when you are focused more on clearing needlessly difficult levels highlighted by weak gameplay mechanics.