Note: A video form of my Cuphead review will be available here and all images are taken from my gameplay I put up on my personal Youtube channel.

After being in development for what seemed like forever, Cuphead has finally arrived. Studio MDHR’s debut game is hand drawn to look like a 1930’s cartoon and it looks amazing. Now everyone around the block who has had a chance to talk about the game will tell you how difficult Cuphead is. While yes, it is difficult, by no means is it impossible and hardly ever are you handed an unfair situation. Anytime I found myself in a battle that took me awhile, I knew my downfalls were self-inflicted (miss timing a jump, not dodging at the right time, losing concentration). I can not say there was a single point of the game where I felt the game gave me an unfair situation which took luck or the perfect situation to happen for me to win. 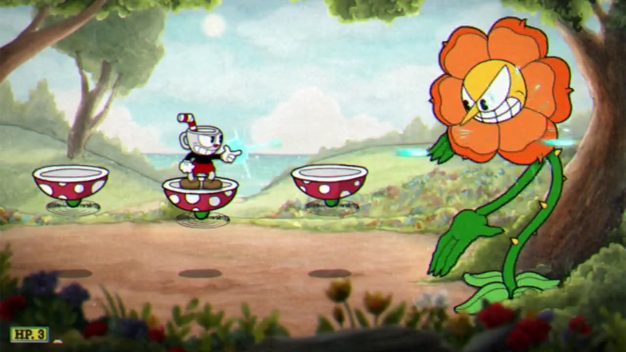 The story of the game follows Cuphead and his best friend Mugman as they go to the Devil’s Casino. After the Devil sees them winning every roll, he makes a deal with them: win one more roll and they get all of his loot, lose and he owns their souls. Of course, they lose and to pay back the Devil, they have to collect the souls of other debtors in exchange for their own. It is a simple story, but it gets the game moving. There is actually very little in terms of story progression from beginning to end. It pretty much comes down to gathering the souls and bringing them to the Devil.

One more thing about the story, the cutscenes are played out in still pictures. As a guy who loves all of the animation put into the game, I would have loved to see the cutscenes have their own animations. By no means does this make the game worse, but I was disappointed to see a game that prides itself on it’s hand-drawn animations have still pictures to tell its story. That being said, who knows how much longer the game would have had to be delayed to put in those animations, so at the end of the day I am fine with it. 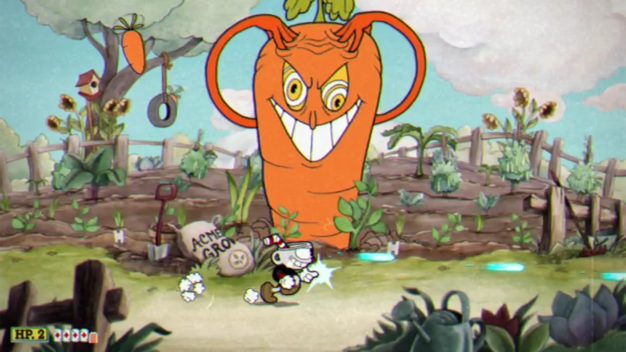 The gameplay of Cuphead is simple, but it works well. Cuphead (or Mugman) shoots bullets out of his hands to damage enemies and has both a jump and dash move to dodge enemy attacks. Pink enemy attacks can be parried which adds to your super move that I will talk about in a second. Using the coins found in the Run and Gun sections of the game, there is a shop in the game to buy new abilities to outfit yourself with and super moves can be unlocked at Mausoleums.

The shooting in the game is limited to only being able to shoot left, right, up, all diagonals, and down while in the air. I found this to be limiting a bit in what I wanted to do. If the fight called for me to shoot below the platform I was on I either had to keep jumping and aiming down or move all the way to the side and go down myself to reach them. Also, there were a few times that not having a full 360 degree range of aiming just didn’t cut it. Especially when you have only the peashooter, there are times that where you are standing is not viable. Putting those nitpicks to the side though, the gameplay is fluid and really works well. 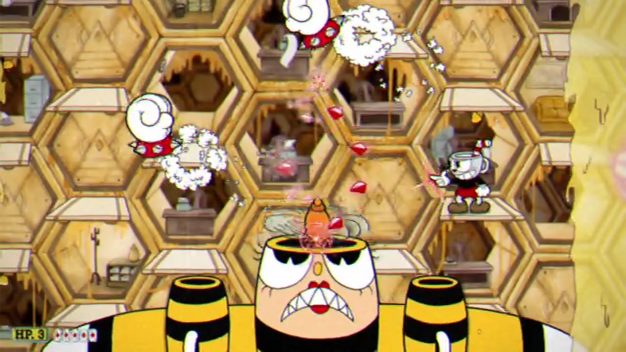 Equippable abilities range from two different ways to shoot, one super ability, and one “charm” ability. I found myself using the normal peashooter for range and switching to the spread shot when close to deal out the big damage, but there are six different shooters available with different effects. For charms I really stuck with the smoke bomb ability which lets you take no damage while dashing, but there are others like more health for less damage, and an automatic parry.

In the bottom left of the screen while playing you will notice cards come up when you deal damage and parry pink attacks. This is your super meter. One card lets you do a more powerful attack, but letting all 5 cards fill up allows you to do your super. There are three supers, a powerful energy beam, invincibility for a very short time, and a ghost attack that can really wipe out enemies when used correctly. For most of my time, I used the energy beam because invincibility was too short, and with the ghost attack I was letting myself get hit more trying to deal out as much damage as possible. The supers are useful tools for different situations. 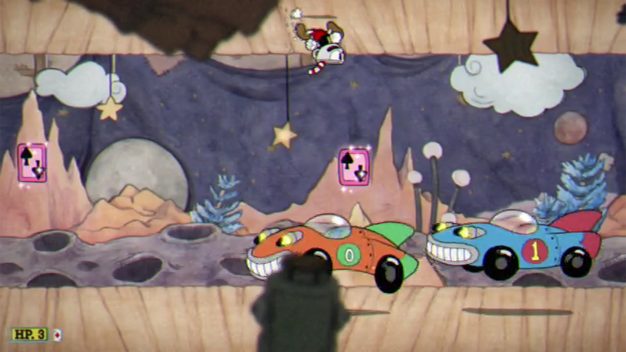 There are two different kinds of levels in Cuphead. First, are the bosses. Every boss is very different from the last one faced. You can start out fighting giant vegetables in a garden, to two boxing frogs, to a dragon while jumping on clouds, to a mermaid that turns into Medusa, to the Devil himself. I loved the design of the bosses and the stages they are placed in. The bosses seem lively with fluid movement, and the backgrounds can sometimes play into how a fight is handled, or sometimes have their own element of animation. The methods needed to win each fight comes down to knowing how to dodge attacks and knowing when to deal damage. There are no health bars or checkpoints in the game and the only indication of progress is when a boss goes into a different phase or you die and you see how close you were to the end on a timeline. Some bosses were a harder learning experience than others, I do not know how many times I saw I was so close to the end, only to die and start over from the beginning.

The second kind of level is the “run and gun.” These are the platforming areas of the game where you have to reach the end while dodging smaller enemies and find coins to spend in the shop. I had a fun time playing these levels, without them I feel the endless boss fights would be a bigger chore. While still challenging, I could always look towards a run and gun section to make the game feel a little more fresh when I spent too long on a previous fight. 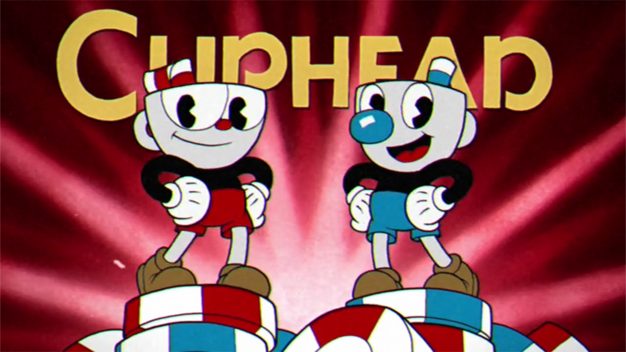 In the end, Cuphead was a blast to play from beginning to end. It is difficult and you will be tested as a gamer, but this throwback to 1930’s era cartoons is an absolute piece of art with great gameplay to accompany it. The $20 price tag is perfect for it and for anyone who has been waiting for this since it was first announced years ago, the wait was worth it.

A nostalgia trip we have never seen in video games

Cuphead is an absolute joy to play from beginning to end. The cartoon art looks amazing with always a perfect choice of audio to accompany it to give you a unique nostalgia trip you didn’t know you were missing. I wholly recommend anyone looking for a challenge to give it a try.