Chaos;Child is a fourth entry in the Science Adventure series of visual novel-styled games by 5pb and the sequel to Chaos;Head. Originally released in Japan 2014, it has over the last few years ended up on basically every platform, worldwide. In Chaos;Child, players control Takuru Miyashiro, president of Hekiho High School’s newspaper club, who experiences regular delusions. At key points throughout the story, the player is given the option to choose if Takuru experiences a negative or positive delusion (or neither). Each choice affects the plot’s direction and the way it diverges from the main narrative into a different version of the story. Chaos;Child uses psycho-suspense elements similar to previous entries in the series, but leans heavily on horror and gore without being excessive. 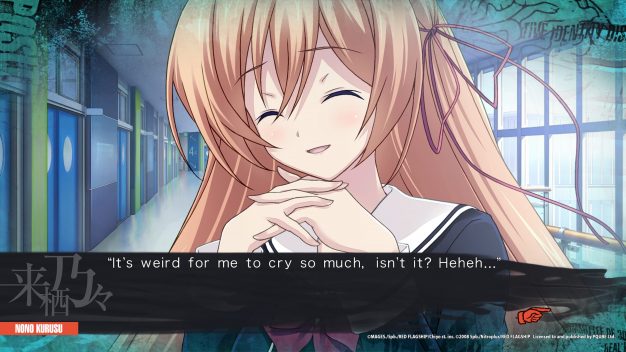 Chaos;Child was my first foray into the true visual novel genre, assuming you don’t count other games like Danganronpa or Pyre which mix visual novel elements with varied gameplay. I went into the game not knowing much about it, nor having played any of its predecessors like Chaos;Head or Steins;Gate. Despite this lack of experience, I have a few strong ideas on what’s required to make a visual novel successful:
For any good game, the final point should go without saying, but other genres can fall short in one of these areas and make up for it in others. However, a visual novel that is purely in that format, with no sections wandering around or playing minigames or participating in action sequences must meet all of these criteria to be successful, enjoyable and captivating. A quick glance at Steam’s visual novel tag will offer a plethora of games with horrendously lazy art and reliance on sex appeal with no knowledge of human anatomy. This alone is enough to turn me away from the visual novel experience because that’s all I’m going to be staring at for 10+ hours. With all of this in mind, Chaos;Child hits all of these criteria with reasonable to great success. 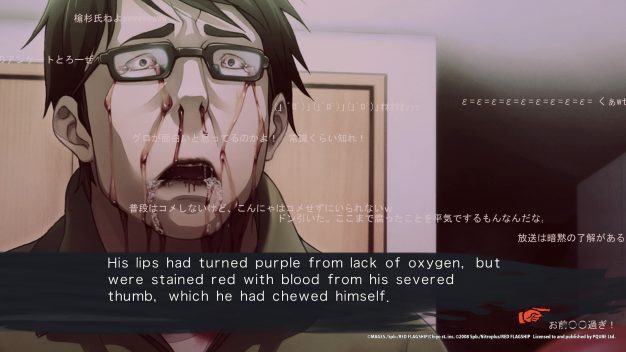 Regarding the main high-school age characters, the character designs are pretty and cute without being very interesting. 5pb have done well to make the characters varied and unique despite only having a few different poses and expressions available, which is something that many games and anime lack. Chaos;Child does well not to fall into the anime/anime-style game trap of falling into stereotypes – while you still have the sister character, the childhood friend character, and the mysterious mute character, you wouldn’t be able to pick them just by looking at the art, which is refreshing.

The strength of Chaos;Child’s character design really shines in the horrific and less-cutesy characters. It’s imperative that if your game relies on the use of gore and horror imagery, you must be able to show these images appropriately and with an acceptable amount of detail. Chaos;Child has fantastic, eerie horror visuals with fantastic use of light and shadow and lingers for just the right amount of time on certain images to stir up a sense of dread and unease. 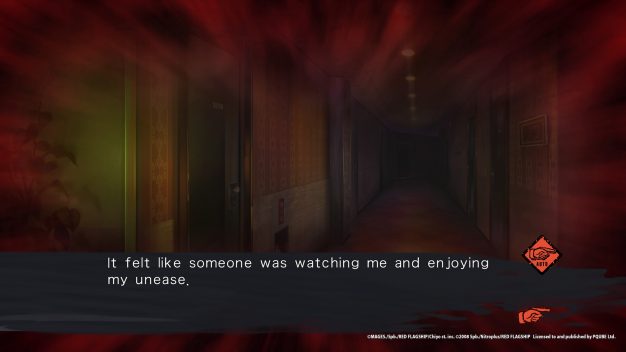 The music, while fairly unmemorable, is perfectly realised for each of the settings in the game – school, crime scenes, in the city and in flashbacks. What really stands out in Chaos;Child is the use of sound effects. In various scenes, sounds like a door ominously, continuously knocking in a specific pattern are used repetitively, which also contributes to the growing feeling of dread. Likewise, all other sound fades away at key points, along with the visuals, to make way for the sound of a racing heartbeat so muffling it’s as if the sound is in your own ears. All of the general sound effects like typing and pouring tea sound blend seamlessly into the dialogue and don’t feel as though they were introduced in an abrupt way, and fade out just as easily.

I’m the kind of person who doesn’t expect that a horror genre text-based adventure like a visual novel or a book will have the same effect as a movie or interactive game of the same genre, but I was genuinely feeling uneasy and gripping the controller harder and harder at regular intervals. The voice acting (all in Japanese) is refreshingly natural and really fits each of the characters perfectly. There is a complete lack of overwhelming anime-style personalities or irritating extremes like squealing or shouting, which I also appreciated, given the risk one runs when playing games such as these. Obviously screams and shrieks do happen, given that Chaos;Child has a reoccurring horror theme, but the volume is balanced well with the rest of the audio and it is used sparingly and to great effect. 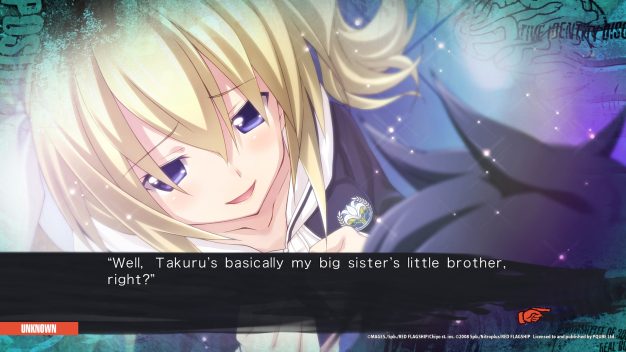 Here comes the bulk of the review, as one might expect from a game that relies almost entirely on its storytelling. Chaos;Child‘s storyline is pretty unique, although I won’t spoil it here for those that intend to play the game in future. For reasons which are revealed later in the plot, Takuru has been beset with regular delusions, which I mentioned earlier in the review, which can be neutral, positive, or negative. The game doesn’t actually give you much of an indication of what you’re supposed to do with the delusions (selecting them involves pressing L2, R2, or leaving the screen centred) or even what they are at first. The delusion trigger pops up in response to certain stimuli in the plot, though it’s often as a response to talking to other people.

For example, Takuru is speaking with a classmate who is threatening him, and choosing the negative delusion shows a path where Takuru imagines in vivid, gory detail, what it would be like to attack the other student. After the delusion is over, Takuru shakes it off and makes a comment on whatever the delusion showed him. At face value your choices have no effect on how the plot progresses, although obviously they become important later on. Positive delusions, in my experience, are almost entirely related to wooing the female characters, even though not a single one of them show any interest in him. While the visuals are very tame, some of the situations that are brought up in positive delusions are quite sexually explicit. It feels a bit icky, like unnecessary fanservice, until you consider Takuru’s general disposition in the game.

Early in the game before any of the horror and gore starts affecting your character, Takuru spends an eternity talking about how he’s not a “normal”, and that he’s a “right-sider”. He also implies that his non-nerdy, non-tech and information-obsessed classmates are “normals” and nowhere near as intelligent as him. Multiple times he states that he is special, and that he wants to show all of them how superior he is compared to the rest of the class – or society in general. He also hates to admit it, but he’s clearly sexually and romantically frustrated and regularly reads ageing magazines about how to pick up women. I really, really disliked Takuru as a character because he reeks of what the internet loves to refer to as a “Nice Guy” or possibly even a “Neckbeard” in some contexts. Since the visual novel format has you constantly strapped to Takuru’s every thought and action, if you aren’t at all receptive to his obsessive love for himself, he’s going to start to grate on you.

Luckily, the other characters are more agreeable, even with their own flaws. Once the storyline deepens a little and it becomes less about Takuru’s thoughts on society and more about his obsessive interest in the case and his past, the grating feeling lessens considerably. Excluding how infuriating Takuru is in the first few hours of the game, Chaos;Child‘s storyline is really gripping and interesting. It’s also a lot longer than I had anticipated, and as such I haven’t even gotten to the end of the story at the time of writing this review. The first chapter alone, which feels insanely long, took at least 5 hours of solid gameplay to complete, although I’m certain it was longer than that. Even though the visual novel format can be exhausting, reading lines and lines of dialogue for hours on end, Chaos;Child‘s storyline will keep you saying “Just one more day, just one more scene” and I truly believe that is the hallmark of a fantastic story. 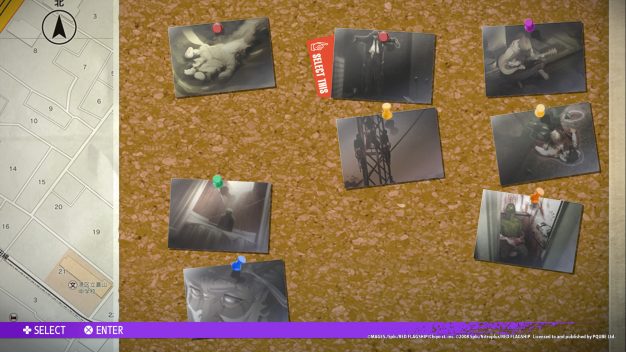 Provided you’re not too upset by unpleasant themes and gory screenshots, Chaos;Child will appeal to you. If you’re not a fan of visual novels or have no patience for non-action games, steer clear and maybe read a synopsis or watch a “let’s play” instead. The story is fantastic, but it might be more suited to a book than a game for some players. Chaos;Child‘s storyline turned what would have been an average to above average game for me into a truly intriguing one. I also think that with the prevalence of glossaries, chat logs, and any-time saving, a purchase on the Vita would be just as enjoyable.

The visual novel genre can be a bit exhausting, given that you have to absorb plot constantly with little variation in gameplay. While some aspects of the story and characters can also be irritating, Chaos;Child has a very compelling narrative, excellent artwork and fairly good character design. Fans of visual novels and horror mysteries should definitely give this one a try.