It seems like many of the indie games I review fall into the same patterns, and I’ve taken to noting these in each article. These patterns don’t necessarily make a game bad, but they do tend to hurt more than they help. As it happens, Phantom Trigger seems to be a melting pot of these traits, and it allows me to go about reviewing the game in a slightly different way than usual. 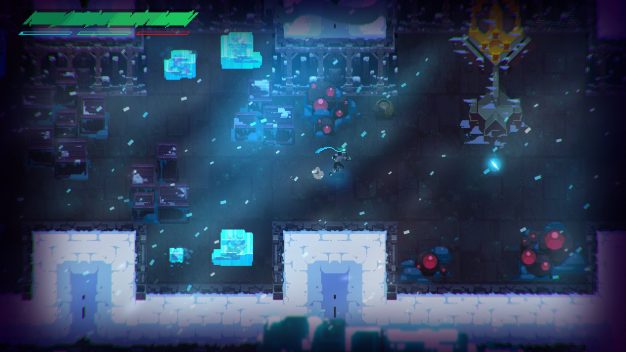 This is just as well; the first common indie game trope present here is crazy difficulty. Whether a game is reaching back to the nostalgic NES era or mimicking more modern games like Dark Souls, crazy hard games have been popular. I’ve never been the biggest fan of this kind of thing, especially as I’m not particularly good at video games. And while there is a place for this sort of thing, I don’t really understand why Phantom Trigger goes that route. What I do know is that I wasn’t even an hour into the game before I reached a point from which I couldn’t continue. I just kept getting blasted back over and over again, until it no longer feels worthwhile to keep trying. As such, this review has to rely somewhat on watching the game more than playing it.

Speaking of which, the gameplay does have the unique twist of the whip, which is used more for puzzles than combat. Sometimes the puzzles are quite clever, which is definitely an accomplishment; I know first hand how hard it is to come up with puzzles. But other times, they’re more convoluted than they need to be, and it seems like the variety leaves something to be desired. Repetition seems to be the order of the day here, as the game doesn’t seem to stray into too many different areas. 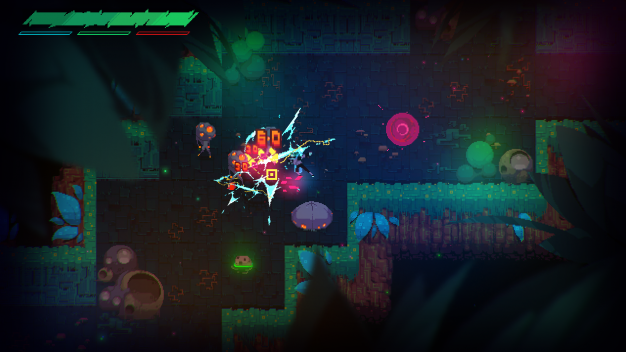 This is generally the part of the review wherein I would talk about the graphics. Fortunately, this leads us to the second trope: 8-bit style graphics. I’ve talked about this many times, and I’m surprised it’s still popular. It doesn’t automatically make a game bad, but often it just feels lazy. In the case of Phantom Trigger, I don’t see any good reason for it. It isn’t replicating classic games like Shovel Knight, and it isn’t doing anything particularly unique with the style like Downwell. I will give the game some credit though; for a game with pixel graphics it looks pretty good. It’s not straight 8-bit; it mixes the pixel style with modern effects in a cool way.

But even that isn’t particularly original, which leads to our third and final trope: games that try to ape existing popular games. Maybe I’m not being fair, but from the moment I started playing Phantom Trigger, a different game crossed my mind. It has similar gameplay and visual style, and it was very popular for a while. Now, I don’t mean to suggest that Phatom Trigger’s developers intentionally made the game similar to Hyper Light Drifter, but the similarity can’t be ignored either. This becomes problematic for a game like this, because people will make the comparison, and unfortunately, I don’t think Phantom Trigger will come out as the winner. 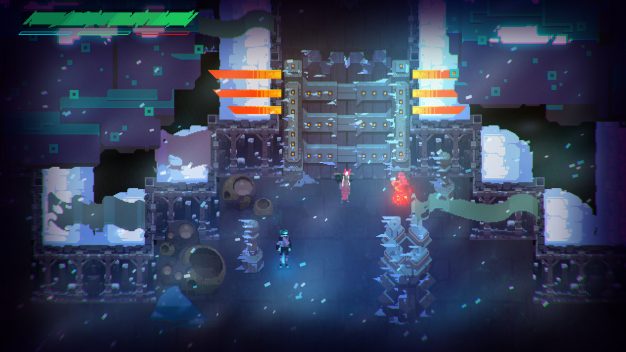 If you’re skilled enough to not die constantly at the beginning, Phantom Trigger isn’t a terrible game. It plays pretty smoothly, and the puzzles and mechanics differ enough from other games that it does have some merit. But if you’re looking for a top down action RPG with a mix of pixel and modern graphics, there are better choices out there. And unless you’re a connoisseur of indie games and have already player those, you can probably skip Phantom Trigger.

Phantom Trigger teeters on the razor’s edge between playable and skipable.