I like it when I can compare one game to another; it gives me a nice warm fuzzy feeling when I’ve got a nice solid point to jump off rather than flailing about in the dark. I’m not saying game “A” is copying game “B,” rather that there are some similarities as well as a whole bunch of differences. What am I rambling on about this time? Well I’m about to review a brilliant little game called Steamworld Dig 2 and I’m a little frustrated to say that I’ve never played anything even similar.

Now, I know the clever sods among you will be saying, “It’s like Steamworld Dig, dummy!” Yes, very smart and I’m absolutely sure it is, but I haven’t played the first game so this is a completely new adventure for me. For those of you who’ve played the original, all I can say is well done; I sincerely hope you enjoyed it and yes, the sequel is probably somewhat similar. Whether, like me, you’re new to developer Image & Form’s rugged robotic world or you’re returning for seconds, let me explain what makes it a world worth visiting.

Steamworld Dig 2 is for all intents and purposes an RPG. You take on the role of a character, meet other characters, get given missions and have to go out and complete them. We all know this formula really well and we’ve seen it a million times before. What makes this title interesting, however, is that it also adopts elements from the puzzle and platform genres. What you get is a very well balanced game that is using all of these elements really harmoniously. How? Well let me explain. 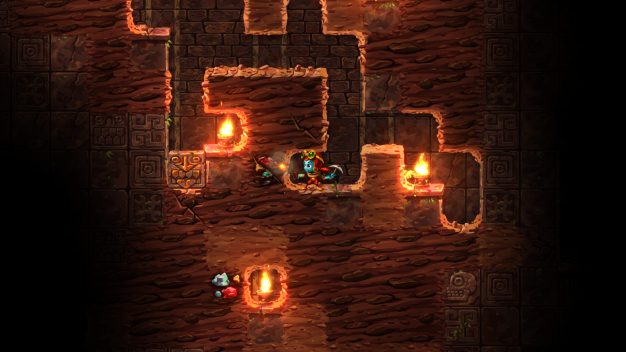 The first thing I need to do is give you a bit of an idea of plot. As this is an RPG this is going to be a spoiler mine-field and as I hate spoilers, I’ll make this brief. Like I said, I haven’t played the first game in this series so I’m looking at the sequel as a separate entity; those of you who have played the first game will know some of the characters and will be able to fill in more of the plot than I can. You take on the role of a young mining bot called Dot and with Fen, your unlikely glowing companion set out to find and perhaps rescue your equally robotic friend Rusty. To do this you’ll have to mine deeper into the earth, upgrading yourself and uncovering new underground locations as you go. As always this sounds a hundred times easier than it actually is.

There’s a certain Metroidvania-esque feel to Steamworld Dig 2. You can’t just hammer your way through everything. Your pick-axe will take you only so far, though you can upgrade this as you go. To get through some of the tougher lumps of debris, however, you’ll find yourself using an assortment of other items. The jack-hammer (basically your fist,) is one such item that you’ll be needing to break through brick. You’ll also find certain areas unreachable the first time you come across them so you’ll need a mixture of explosives and your hook-shot to be able to get there. 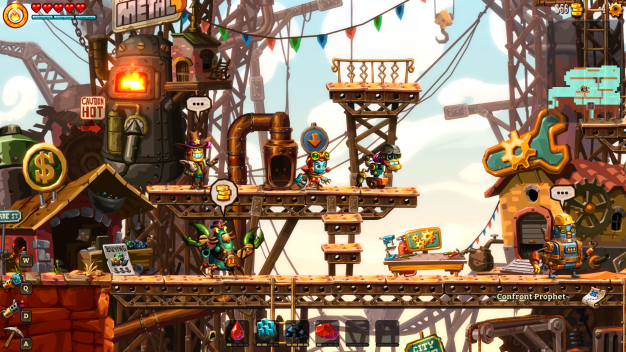 You won’t be able to do this immediately so a certain amount of back-tracking is necessary. This is something that is made very easy which I really like. You will come across mining elevators as you descend deeper into the earth and can easily jump between them to reach different areas. As we all know, back-tracking is absolutely fine, but when it takes ages just to reach something that turns out to be relatively minor it can also be really annoying.

This title is a side scrolling affair. As you dig you will find yourself creating platforms to jump on and off of. There is a certain amount of strategy to this. Enemies and other hazards are often buried in the rock. As you dig around them it makes sense to try and avoid potentially lethal situations by creating tunnels and platforms that circumvent danger. You’re a tough little robot but it still pays to avoid harm were possible. Careful planning also makes life easier in general. You aren’t just digging downwards, the simple fact that you’ll need to go backwards means that giving yourself an easy route to do this is very important. You’ll have to go back to the surface often. This is where you’ll upgrade your stuff but you will also automatically fill up your lamp. It isn’t sensible to go digging about in the dark as you don’t always know what dangers are lurking directly beneath you. 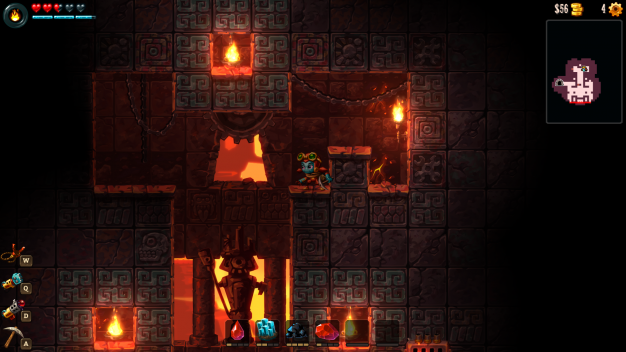 The puzzle element to the game that I mentioned comes in the form of secret rooms you’ll uncover while you’re mining. These rooms usually contain cogs and in certain cases artifacts. You’ll want the cogs because you use these to apply special abilities to your gear. Artifacts can be exchanged for cogs so are very useful if you can find them. These items also have a bit of story attached to each of them. For completionists out there there are about 49 of these dotted about the game world and some of them are fiendishly difficult to get to. The rooms that many of them are found in are built around a puzzle that needs to be solved. This is a brilliant little addition to an already well thought out game. If you really want to do everything you’ll be taking a break from the story just to spend some time on these puzzles and I can absolutely guarantee that you won’t be solving most of them first time around.

Mining isn’t just how you get about this game it’s also how you make a living. There are gem blocks among the other destructible tiles. These contain the precious stones that you’ll sell off for the cash you’ll need to upgrade your tools. These upgrades will give you more light for your lamp, more armor, a better pick-axe and so on. These upgrades are really important but the process of getting them feels fluid and comfortable, you won’t find yourself getting frustrated because you’ve been waiting an age for more inventory space. You get what you need as part of the course of the game. 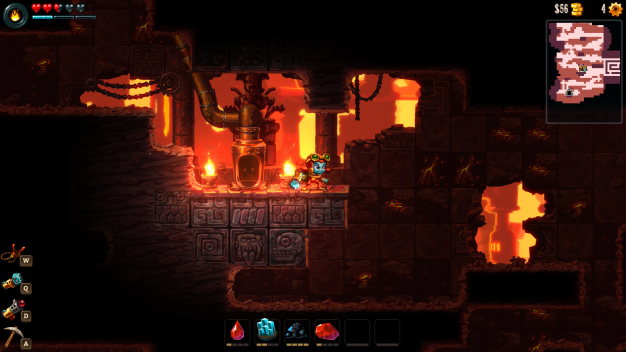 I mentioned cogs earlier and these are also highly important bits of currency. As you upgrade your gear other customization options become available. For example, my lamp now illuminates collectible items, making them easier to spot and find. I’ve also customized my pick so that when I destroy a tile containing a collectible item I also destroy some of the tiles around it. All of the additions you’ll be able to unlock are useful for one reason or another. One of my pet peeves in a lot of games is when you have a lovely big upgrade tree but on account of your play-style you only find yourself using about twenty percent of what’s available. The other good thing about everything being useful is that you have to think a bit harder about what you’re going to buy and when.

So, I clearly like the story and really love the game concept, but one thing that I have certain reservations about is the controls. As with many PC games nowadays, this game is best played with a gamepad. I don’t have a gamepad, and as such I’m finding myself coming across what feels like increasingly unwieldy keyboard controls in many games. I completely understand that with modern games you need a ton of commands and that these are often best bound to a series of buttons for sheer comfort. What I don’t like is when these commands are spread all over the place on the keyboard. This is something I’m noticing with Steamworld Dig 2. 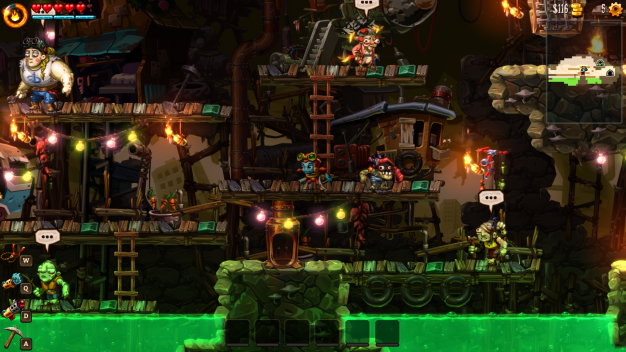 At the beginning of the game when you only have so much gear, controlling Dot is easy but as you collect more items you find yourself tapping the wrong buttons because there is literally a command for everything. These commands are shown on screen, which is fine but when you’ve just hit the perfect jump to slam your hook-shot into something and find yourself flailing your pick about in mid-air instead it gets a bit annoying. The controls aren’t game breaking and it’s nice to be told you’re best with a pad at the beginning of the game but if you don’t have one there isn’t a great deal you can do about this. Yes I know, stop whining and go out and buy a pad … these things cost money you know.

Other than this relatively little irk what we have here is a seriously gorgeous looking game. The artwork is beautifully painted and the characters you meet are cute, colorful and likeable. I particularly like the cultists you meet. These guys aren’t likeable, they’re very dangerous and completely insane but they look great. Sound and music are all there but I have to say neither are something I’ve particularly noticed. I’m not sure whether this is a plus or a minus but the fact that nothing is annoying me means that I’m going with the fact I’m just so embroiled in the gameplay that it’s all fading into the background. For me, at least, if it isn’t making me grumble it isn’t a negative. Other than these key factors the story is engrossing and actually quite funny in places so definitely another plus. 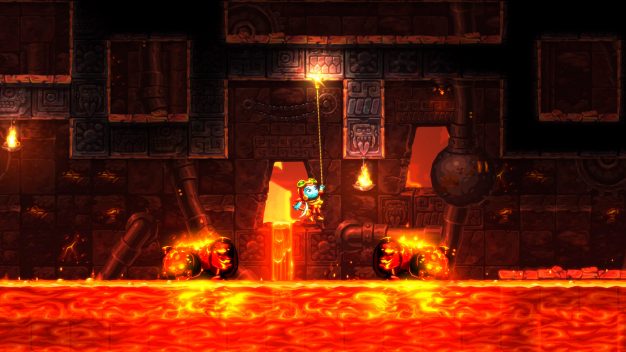 As I mentioned at the beginning, I’ve never played a game quite like Steamworld Dig 2 and I’m enjoying my experience with it so much I’m actually going to go and buy the first one so I can play everything from the very beginning. As far as I’m concerned, if a sequel to a game makes you want to go out and get the rest of the series this is kudos enough. I really think a lot of gamers, and not just fans of a good RPG would find a lot to love about this game. Steamworld Dig 2 is absolutely sitting on my recommend to friends list and I really think you should track it down and have a bash at it yourselves.

Steamworld Dig 2 is a silly amount of fun for a ton of different reasons. Sit down, dust off your pick and get digging. I can absolutely tell you that it’ll be well worth the effort.