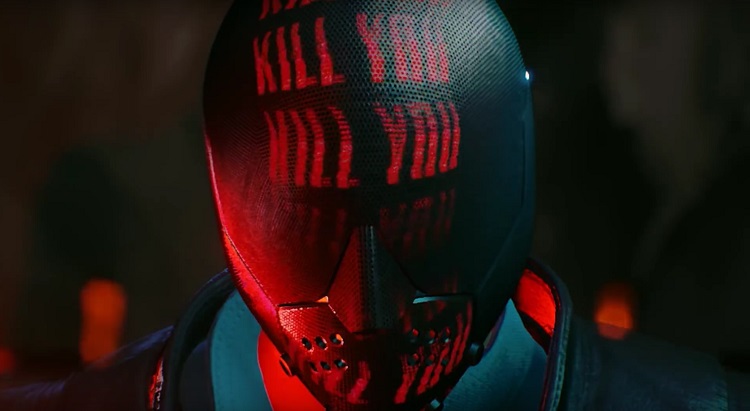 In the year 2091, society has devolved into some sort of lower life-form where empathy and compassion no longer exists and all the populace is concerned with is indulging their most lurid fantasies via the invention of Virtual Reality, or how its more commonly known, Virtuality.  Corporations control who lives and who dies from the upper floors of a gleaming tower called Heaven while the poor scrounge and scrape out meager existences in the ghettos below.  Augmented with implants to make you a better human being, there is a flaw that allows someone of dubious intentions to hijack your implants and send you on a mission to kill the boss.  With the help of a mysterious hacker, you are set free and helped to escape before you are able to find the him/her/it and possibly lose your life.  Now its time to find out what exactly happened to you and dish out a little punishment in return. 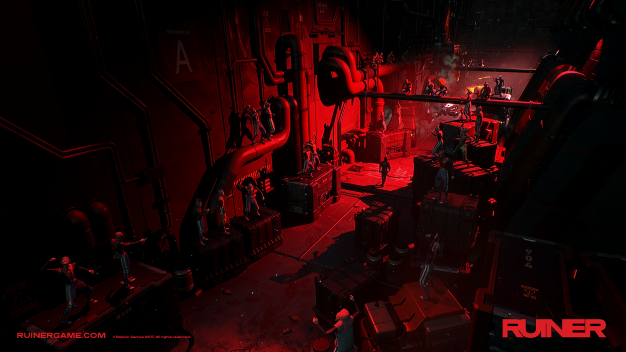 What I have just described takes place in the brutal new cyberpunk shooter Ruiner from publisher Devolver Digital and Warsaw, Poland based developer Reikon Games.  What you’re getting in this game is a top-down action shooter created in the spirit of the cult cyberpunk anime and game classics that have defined the genre for the past three decades.  Offering quick and satisfying brutal yet paradoxical gameplay, Ruiner presents a surprisingly original game world melded to a thrilling perfected story-line.  In addition, the visuals are wholly unique and sets the stage for a dark dystopian future where hope is fleeting and mankind isn’t living up to its full potential.  This is a dark world and just the place to insert a challenging and fun gaming experience. 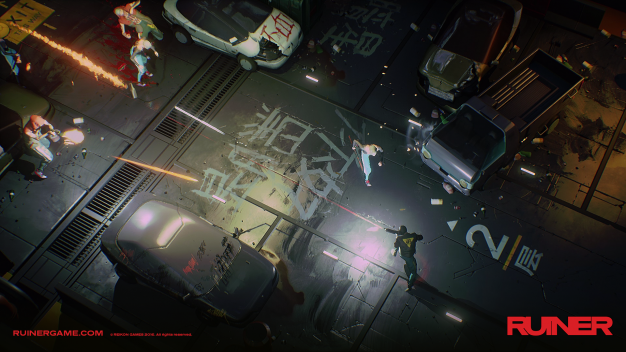 Gameplay in Ruiner is just what you would expect in a shooter.  As you make your way through the many sparsely lit corridors and into the those areas where all the bad guys are waiting to pump hot lead into your ass, you can fight fire with fire with your hand gun or pick up the varied number of weapons that said enemies will drop as you send them on to their next life. Once the ammo is consumed, you only need to pick up one of the other weapons that will undoubtedly be laying on the ground and continue your campaign of carnage.  The sheer number of weapons in this game, such shotguns, laser rifles and hand-cannons, is amazing and every new area I went into offered up a new weapon to try out keeping me pushing forward to find that next even more powerful killing tool. 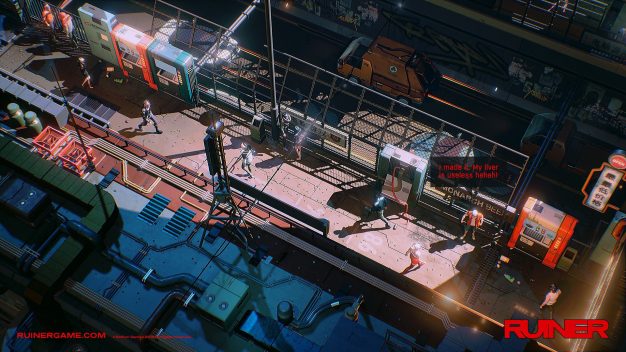 Enemies will jump out of hiding from just about anywhere but most often when you enter a room that has multiple exits.  The game environments are built a lot like the classic arcade game Smash TV where you are ushered from room to room only being able to advance once you have defeated that rooms assigned number of attackers.  These enemies come in the form of Creeps, Heaven Security, Triad gang members, Cyborgs and others that I don’t want to spoil, but rest assured, it is a good variety that always felt fresh.  You will also have to face boss characters that all have a specific move-set that you will need to learn in order to best them.  The on-screen action is fast and frenetic so you better be on your toes and the edge of your seat if you want to emerge victorious. 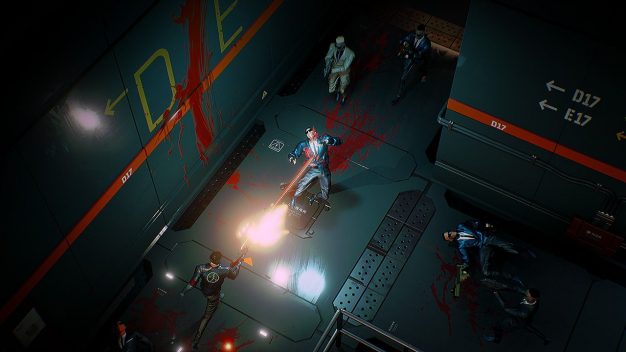 As a way to level the playing-field, so to speak, you also have a range of gadgets that you can use to make the baddies wish they had stayed in bed.  Being equipped with cybernetics allows you to have a few choice abilities that will aid in your journey to make those who hijacked your mind to pay in full for what they tried to do.  You have a charge ability that allows you to run into the enemies and cause severe damage to them.  There is also an energy shield that will deflect enemy fire but when confined with the Charge movement will totally decimate your opponent.  And last, but definitely not least, is the Dash ability that allows you to quickly move around the killing-floor dodging enemy attacks and weapons fire. 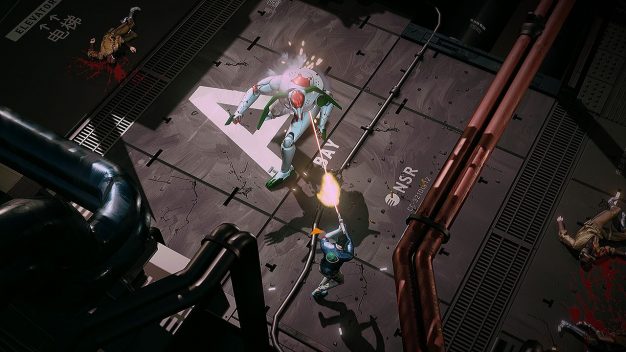 As a huge fan of all things cyberpunk, I had a really good time in the world of Ruiner with its dark themes and cyber-enhanced denizens.  However, there are a few issues that would take me out of the moment when they happened that may be of a concern to you as well.  For instance, because the environments are so dark and so much happens on the screen at once, I would constantly lose the exact location of my character and would often take damage from enemies because I couldn’t find myself on-screen.  Also, from area to area, there wasn’t a lot of visual variation in the environments across fifteen levels.  This is kind of understandable for the subject of the story but it did get somewhat boring continually looking at similar environs level after level.

We have seen a few cyberpunk themed games this year (Blooper Team’s Observer being the most recent) in the run-up to CD Projekt RED’s Cyberpunk 2077 which I am hoping will be sometime next year.  I loved the pure action rush of Smash TV back in the day and the gameplay in Ruiner scratched that itch quite nicely.  All of its shortcomings aside, the story is fantastic and sufficiently weird, the weapons felt substantial and effective and the world itself felt alive and foreboding.  Fans of cyberpunk thrillers can appreciate this ride for sure as it will definitely satiate your taste for this type of adventure.  Ruiner is available now on PC, PS4 and Xbox One.

Man has always been afraid of the darkness.