The Xbox One X has launched and with it comes a new mid-step console generation promising cutting edge graphics in your very own living room. With all the talk about vapor chambers, terraflops, and HDR 1440p it can be easy to become lost in a sea of buzzwords that you, as a consumer, aren’t sure of the value they hold. To make a long, technical story short, the Xbox One X makes games look really pretty and run makes them better than they would on your dusty, old Xbox One.

There are plenty of games that I look forward to taking advantage of this new console and there are several that make you question what they would even do with all that power. This is where Ark: Survival Evolved comes into play. I reviewed the console version of the game a few months ago (which you can read here) and left feeling very underwhelmed; one of the biggest disappointments of the game came from the poor graphics and technical bugs. If I may quote myself, “[Ark] suffers from terrible, choppy framerate issues, constant screen tearing, pop-in textures everywhere…”; basically, the game felt close to broken.

So, could Studio Wildcard fix all of these issues with their free Xbox One X update? They boast fast load times, vivid colors, longer draw-distance, and overall enhanced visual effects. Lucky for us the Ark team has provided us with a quick comparison video of the game running on original Xbox One hardware and the new, flashy One X hardware.

Verdict: It’s undeniably a better looking game, but I’m still seeing some issues. For example, the sweeping shots of landscape no longer physically pain my eyeballs, but they still don’t look amazing. The rain effects are still choppy and there are still very noticeable screen tearing issues in this official comparison trailer. For a free update I guess my expectations should have been hampered.

However, the coolest addition in this update that is the real (read: only) highlight of this update is the split screen multiplayer. Growing up in a household with siblings and other family members has left me with the softest of soft spots couch co-op. Despite all of my issues with Ark:Survival Evolved, the addition of a split-screen mode still pulls me in as it would alleviate a lot of the problems I had with the game. 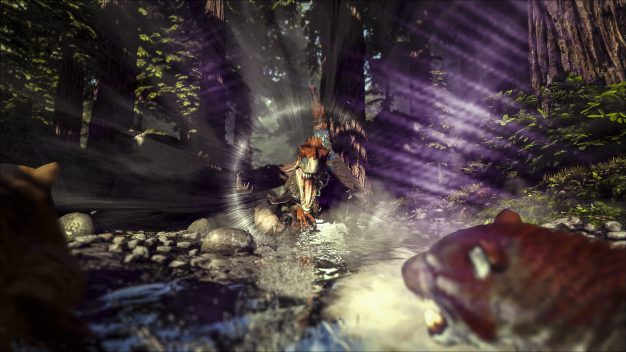 Poop your pants running from dinosaurs…With a friend!

Ark: Survival Evolved is available on the PS4, the Xbox One and One X, and PC via Steam. If you’re already in the game, you can join the forums here to grow your tribe and take your hunting to new levels.