This past week, I got a spend an hour playing Laser League in an early access event with some of the developers. The game is published by 505 games and developed by Roll7, makers of pixel based side scrollers OlliOlli and NOT A HERO. Their latest game ditches the pixels and plays from a top-down perspective where you can see the whole arena at all times. Laser League is a competitive futuristic “sport” game where two teams must eliminate each other by lighting up laser nodes to their color and avoiding colors of the enemy team. If a player makes contact with an opposing color, they go down until either the round ends or a teammate revives them. When all players on a team go down, the winning team, as you would expect, scores a point. In the online matches we played, three points wins a team a round, and two round victories win the game. 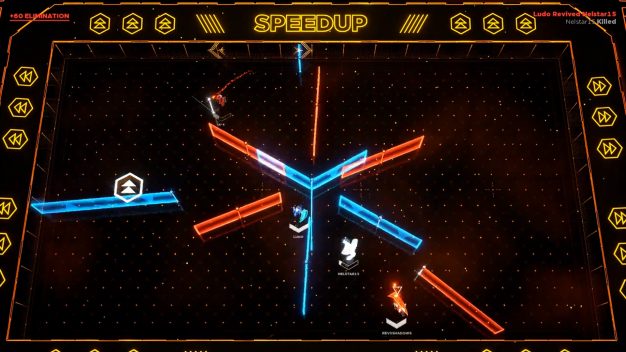 The gameplay of Laser League is a lot of fun. The longer the round that you are in goes on, the faster and more unpredictable the lasers begin to move. While at first things start out slow and boring, they can quickly get out of hand if you find yourself on the team with fewer lasers. Probably the thing I liked most about the game is that it forces you to think fast, or you are screwed. I had plenty times in my hour of play that I knew right after going down what I should have done differently. You have to be fast-reacting which makes for exhilarating play and crazy moments.

This was an early version of the game that I played, but I will note that there were times I thought the hit boxes between the characters and the lasers were a little off. I would see replays where people went down when they were successfully out running a laser or moved to the side in time. I am sure this is an issue that will be taken care of before the game officially releases, but I noticed it on quite a few different occasions. 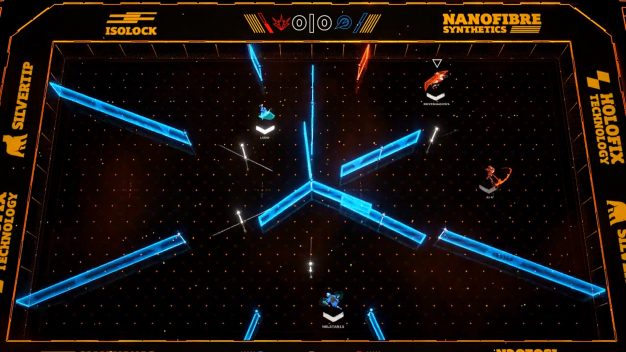 The environment of the game is simple. You can tell that they are going for that Tron aesthetic, and they nail it pretty well. If given the money and time, I am sure Roll7 could easily make a fun light cycle mode, but I digress. Like any sport, Laser League takes place in arenas around the world. When talking with the developers, I was told there are multiple arenas, each with multiple laser set ups, but in the hour that I played I only got one arena and two set ups so seeing more of a variety would have been nice.

As the match goes on random power-ups will appear on the floor and these can be complete game changers. There is a power-up that will reverse the way all lasers are moving, swap colors on all lasers, one that will erase all nodes, and quite more. I was told that there are a total of 16 different power-ups. Just grabbing them without thinking is not a smart practice however. There can be instances where you have the upper hand and grabbing a power-up could completely shift things in the other teams favor. 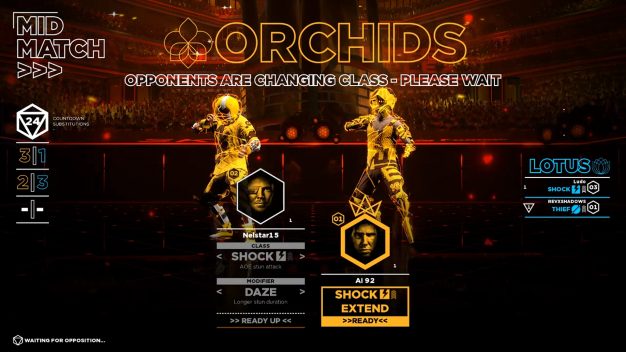 As I mentioned earlier, downed players can be revived by teammates. When a player goes down they leave a marker on the field. When a teammate runs over that marker the player will be revived with probably about a half second or so of invincibility. As an opponent, guarding the revive spots on the field can cause a lot of headaches for the other team and was one thing I had quite a bit of fun with doing when just running for lasers in that area of the map.

One of the best decisions the developers made with the game is that at the end of each round, the loser of the round gets choose a new class. This will allow teams to strategize and make fixes to picks that are not working. One of the more interesting choices of the game is that there are a number of classes you can choose from that are much different than the rest. Blade, Thief, Ghost, Smash, Snipe, and Shock are the available classes to choose from, each having two different modifiers to them. 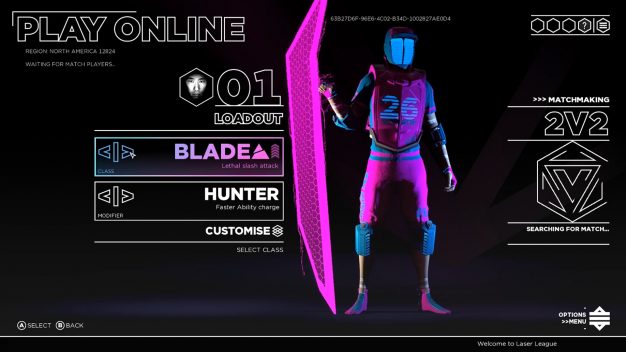 Blade is the first type I played as. He has a short, quick slash attack that will down enemies he comes into contact with. I never actually got to take anyone down with him, one, because I had not figured out the controls yet, and two, it’s not as easy as it would seem to dash through an enemy and avoid lasers on the other side. Overall, he was a simple character and I feel many newcomers will play as him. 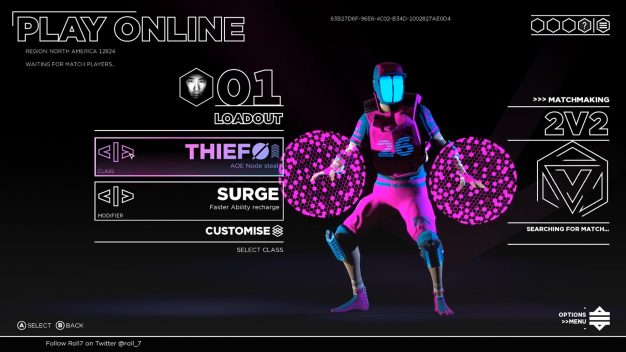 Thief was the one I played as the most and the one I had the most fun with. He gives the player the ability to steal enemy lasers and turn them into his own teams. When you press the ability button a ring surrounds him for maybe a second and a half. Any activated nodes of the opposing color that enter that ring will change to yours. This ability got me out of some tricky situations and made for some quick turnarounds on enemies who thought they had me on the ropes. He is a great one for strategizers to use. 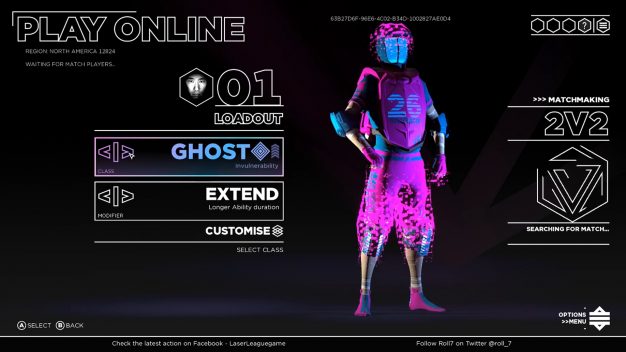 This is the only class I believe that I never saw in a game. As you would guess by his name, Ghost turns invisible for a short period of time where he cannot be hit by anything. He is free to walk through lasers and enemies for a brief period of time. A great pick for getting out of sticky situations of reviving teammates. 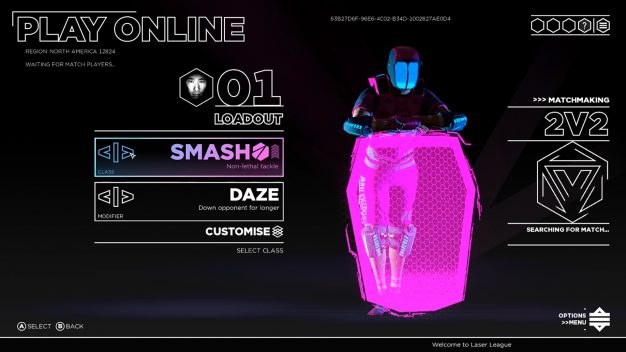 As you can tell by his name, Smash is the bruiser of the lot. He has a longer dash than Blade that will send enemies flying backwards quite a ways. This can be used for knocking enemies out of position or just knocking them into your own lasers. Just avoid what I did a couple times where I accidentally knocked the enemy into safety. 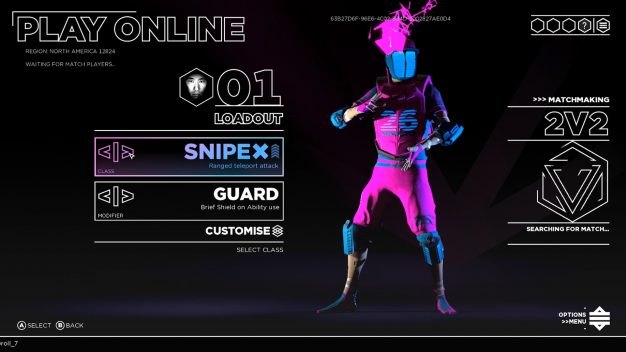 Snipe is an interesting class that got me killed a few times during my play time. Snipe can drop down a marker and as he walks from it a line will be connected between him and the marker. When he presses the ability button he will warp back to the marker, taking down any enemies in the path. Between dodging lasers and trying to decide where to make my next move I had a very hard time not just avoiding, but looking for Snipe’s lines. 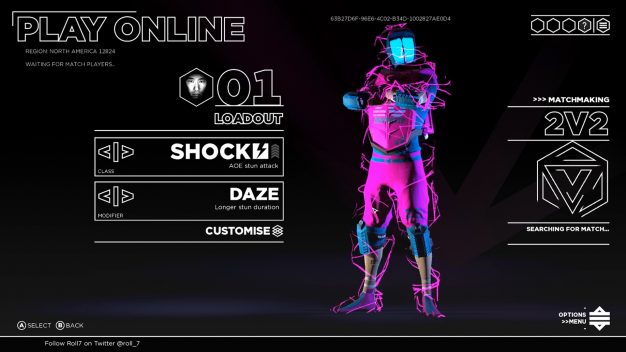 Personally, Shock was by far the most irritating class to play against. When the ability button is pressed, an electric shield will surround Shock. Any enemies that make contact with this shield will be stunned for a couple precious seconds. During this time they are sitting ducks for any other enemy attacks or moving lasers. 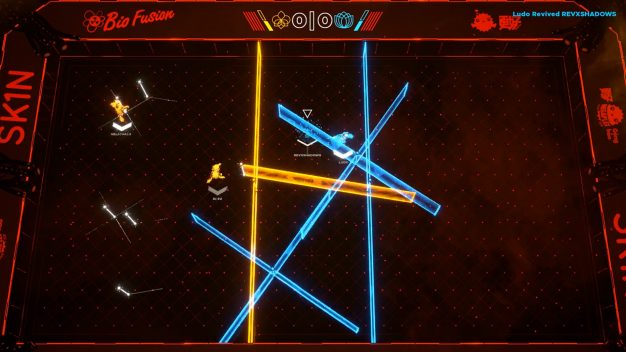 Probably the thing I heard the developers bragging about the game the most was the customization of the classes. They really wanted me to understand that each hero has their own leveling system and as you level each one you unlock more customization items. Personally, I didn’t really care about this detail, but for those who like unique-looking characters,  there are supposed to be over 250 customization items in the game.

Overall, I had a blast playing Laser League. This is a highly intense game that had me yelling with excitement by the end of my playtime. I truly believe this little developer has a great game on their hands and I hope to see it do well. Personally, seeing what the finished product will play like excites me, as long as they can get the hit box issue taken care of and add some more variety to the laser patterns. If the game works when it comes out, and it is handled correctly, it could be another Rocket League-like success story. 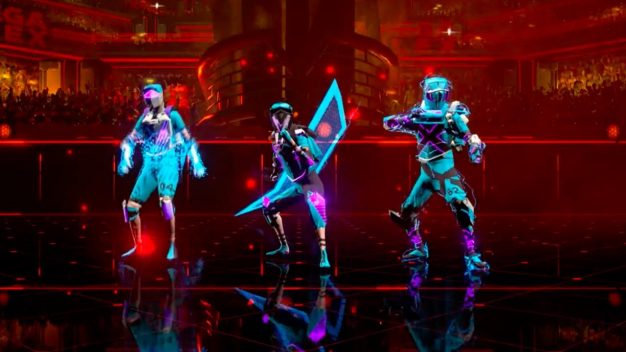 I asked the developers if there was any plan to bring the game to consoles and they said that it was being talked about and work on the console versions would be beginning once the game hits early access on Steam. Laser League is expected to go into early access sometime this year with no release date announced yet. The open beta starts Friday January 26 at 9:00 AM PST and goes until Sunday, January 28 at 10:00 PM PST. If you have a PC, give this game a try this weekend.

This preview is based on an early access demo provided by the developer.